I’m really interested to see which small producers have caught the attention of all the wine lovers on this Community - I’m guessing between us we have some pretty brilliant finds.

I love trying wines from tiny, family operations - especially when there’s a story behind it, or something particularly special about all the love and attention that goes into the wine.

I’ll start, obviously! For me, it’s Grabenwerkstatt - you can read a much longer, more entertaining version of their story here courtesy of @Freddy :

They basically make tiny quantities out of a ‘garage’ winery in the middle of nowhere in Austria, and when I tasted the wines I was just mesmerised by their purity and complexity. The kind of wine where you know you’re tasting something special, so you want to take time over the glass - and the lovely story behind the two guys that make the wines just adds to the magic. There’s none in stock at the moment, alas! I think the article mentions we might get some more later this year though.

Beeslaar - one wine, one man, one vineyard (South Africa)

Once & Future - run and made by one man (California)

Think we would need to define what “small” is

Number of cases produced surely the only way to go? As such the likes of Tour St Bonnet wouldn’t really qualify.

There are (obviously) dozens in SW France, I would say it’s more the norm than the exception, but one stands out for me:-

Clos de Gamot . Same family have been producing a single variety on the same spot since probably the 1400’s (possibly even as far back as the 1200’s). They live right in the centre of their vines, the family home until recently also containing the tasting room. They leave their premier vineyard, the Clos St jean, to grow almost wild (with extremely minimal intervention, in drought years, such as 2005, the harvest is much reduced by deer and wild boar in search of scarce liquid). Rumour has it that the plot is coveted as some of the greatest vineyard land in France. (Who knows though, there is a great deal of twee mysticism surrounding their products. Caveat Emptor

The current family seem as much untroubled by the modern world as their many generations of ancestors. The wine is also reasonably unique, certainly old fashioned. On scarcity value alone, it represents an outrageous bargain. I love it.

Yeah, Gamot is quite something! Many years ago I’d obviously heard something about the estates fame, and recommended it to my Dad. He dropped in and bought a case. Must have drunk three or four bottles over the years (it was the 2000 vintage, and the last one was a good few years ago). I remember one bottle was spectacular, old-skool stuff like a wild, fearsomely tannic and even more rustic Noel Verset Cornas, but others were pretty hard going, esp for a red meat avoiding wimp like myself

But then I’m probably not the target market - i admire these tannic SW beasts but just can’t find anything to eat wirh them (Cahors even harder than Madiran!)

David & Nadia, Swartland. Just outstanding wines from an incredibly marginal set of vineyards, a balance of complexity and pure pleasure.

Dumien Serrette, Cornas. Pretty much a single cuvee producer, from a single vineyard and always amongst the most accessible Cornas.

Le Grappin (for white) and Jane Eyre (for red) in Burgundy. Both Micro Negocients making great earlier drinking styles of wine that have the levels of complexity of much finer wines. Both also make great Cru Beaujolais and Jane has just started making an chardonnay from the Jura.

Adi Badenhorst - not particularly small, but not particularly big either (about 60 Ha) - makes some of the best Chenin Blanc in the world and has a few interesting red blends too. The Secateurs chenin is a particular favourite.

Clos de Gamot themselves recommend ‘Truffes sous la cendre’ , which I’m sure is available in most Aldi/Lidl stores down south

I agree that defining ‘small’ is not obvious. One way is production volumes. I think mine would be: if you turn up at the winery, who answers the door and what are they wearing!

Some of my favourite small-ish producers would be:

Vicky Torres at Matias i Torres on the island of La Palma
Nino Barraco in Marsala (second Occhipinti and Cos of course)
Fattoria San Lorenzo in the Marche
Tre Botti in the Tiber valley (yep, the name is literal!)
Bodegas VidAs in the Narcea valley in Asturias
Aphros in the Minho
Barranco Oscuro from.the highest vineyards in continental Europe
Mlecnik in Slovenia
Sclavos on Kefalonia

And probably many more I can’t recall right now.

These are mostly produceers who only make a few barrels.

In the Loire, I enjoyed the Chenin from various slightly obscure appellations produced by the 15ha Domaine de Belliviere, which TWS stocked briefly at one point.
http://www.belliviere.com/en/estate.htm

In Alsace, comparing rieslings from different vineyards, all produced by Bott-Geyl, also 15ha, was the first time I really thought about the impact of terroir on a wine.
https://www.bott-geyl.com/english/index.htm

And for a 15ha hat trick, G. Mascarello of Barolo fame also counts as a small producer in volume terms I think…

I love trying wines from tiny, family operations - especially when there’s a story behind it…

I don’t get the wine trades seeming obsession with ‘stories’. Either the wine is good or it isn’t.

But, since you asked for an example - how about Callejuela.

Surely a wine can be good but boring? Or deeoly imperfect but alive snd more interesting?

Domaine Mochel in Alsace. Sadly only one of their wines now stocked.

One of my favourites is Moulin de la Gardette in Gigondas…

Small, family run winery whose wines appear in the TWS list once in a while, and are usually included in the Rhone EP offers. Their Ventabren 2016 is slowly maturing in the cellar downstairs right now - a treat for the future me.

An affinity with small producers often comes from meeting them in person so that you can understand their story and approach - Jean-Baptiste Meunier is a great guy if you ever get the chance.

Small producers that I have tried through W/S - Toni Jost, Domaine Serol and Ch. De Merande.

I tried a bottle of her rosé last night, before reading the above. 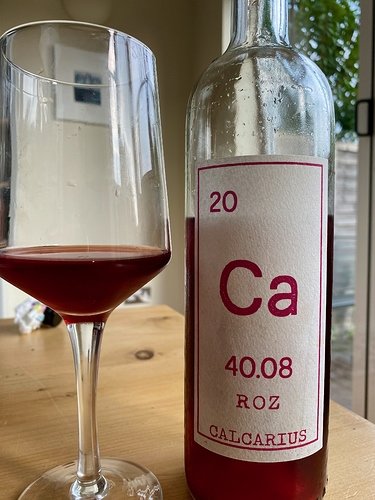 Sadly almost every fruit and veg producer in S Italy uses caporolato. It is only marginally better in Spain, and of course in the UK too.

It does seem rather unfair to post this on a thread about small producers, as if they were particularly prone to exploitation. The opposite is likely to be true, of course.

Agree on Tony Jost, and definitely worth visiting if you get the chance. But I am not sure I like this thread. I want to keep my small discoveries to myself.

Julie Balagny in Beaujolais. Proper garagiste operation, all based in her small barn but making characterful enchanting wines. Very honest and friendly when I visited in 2015. She seems to have made a success of it as prices have crept up steadily over the last few years.