Wines that go to sleep

This is inspired by a post from @cerberus quoting Helmut Dönnhoff on riesling drinking periods, where Dönnhoff said "Riesling has two talents… I like it very young. It is wonderful to drink these wines young and fresh on a warm day. But don’t drink it all in the first two summers after the harvest. After 3 or 4 years the wine goes to sleep, and then after 6 or 7 it comes back. So I like it in the first two or three years and then after 10"

Clearly all wines evolve over time, some more desirably than others. But we sometimes talk of ‘dumb phases’ in this evolution, where the wine no longer expresses its youthfulness well but nor does it show much in the way of positive evolution. Anecdotally (i.e. based on my own reading), this mostly seems to be in the 4-8 y/o range. If given time, though, these wines come round and are good examples of more mature wines.

It seems some wines are more ‘guilty’ of this than others. I’ve heard of this several times for Northern Rhone reds in particular. The riesling example I think is discussed less often.

From a selfish perspective I’m interested in knowing others’ experiences with riesling in this respect, as it may inform to an extent when I withdraw some wines i have in reserves. Beyond that, I’d be interested to hear general perspectives on the idea of dumb phases, and wines which seem to experience this more clearly than others.

I think Musar does. For me it’s interesting when first released (and usually already got several years on it) but ive found a few years after release it to be muted and bland. 18-20 years and it’s interesting again, like he 2001 from Waitrose right now.

It may be unwise to generalise geographically too much as some wines majoring on certain grapes seem to behave differently in different climates.

On the riesling example, winegrowers in the Clare Valley (Aus.) sometimes quote a “rule of fives”, when they feel their wines tend to show their best. That would be as soon as released (for those young, fresh flavours), five years (a good balance point between the younger, limey purity and the appearance of maturer flavours, and ten years (when maturity is clearly evident, assuming the wine is good enough, before losing the balance of citrus notes. I wouldn’t apply that to German or Austrian wines automatically though.

But I think that surely the most problematic wines for closedown are red Burgundies. They can close down hard, and have nothing to offer until they suddenly blossom in maturity. Infuriatingly, there often seems to be a good deal of bottle-to-bottle variation on timing, and sometimes it doesn’t happen at all.

Ian you are spot on about red Burgundy.
I think that I am close to cracking the red burgundy closing down/hibernation conumdrum and am preparing a thread on it.

In my experience top white Rhone is most famous for this.
Some top grüners from Austria too.

@Freddy interested to hear that on white Rhone - I’m guessing we’re talking about white Hermitage and the likes here, do you find these tend to be very good in the first few years from vintage? I do have some (white Hermitage) and was wondering whether it would be a waste to drink young.

Burgundy seems to me to open and shut during the course of it’s life more than once, and sometimes startlingly quickly. Although it is of course often put down to bottle variation, but I am not so sure. Vintage port does the same.

Noticed that Donnhoff bottle some wines in screwcap and some under cork, I tend to drink the screwcaps 2-3 years old and keep the cork bottled wines for longer.

Among the Reislings I have had delivered in recent times there are more than the odd one coming with screwcaps, it is logical to assume they are for early drinking, but you then get into the argument of whether you can age wines with screwcaps and we have been there before, does it matter?
Germany did have a reputation for dodgy corks years back, not alone I might add, and many of the long kept wines suffered from the dreaded crumbly cork, though Reisling in the sweeter styles still seemed to survive, sugar content etc without detriment.

The general consensus now is that wines do age under a screwcap, but they have not been around long enough to see whether really long ageing is any different from cork.

This is only one view, but only a few years ago this opinion would have been poo poohed by the establishment, times have changed. 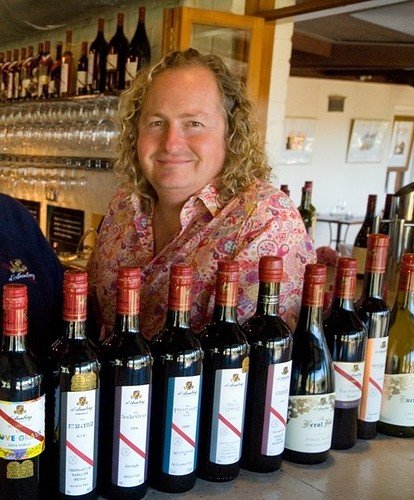 Screwcaps are the best closures for wine as they slow down the ageing process “like a really cold cellar”, according to Chester Osborn of d’Arenberg.

I went to a Kumeu River event/tasting hosted by one of the Brajkoviches (can’t remember who) a while ago where they discussed screw cap vs cork, and mentioned that they had done some long term experiments, including with liners which permit varying amounts of oxygen, with very good results. I’d imagine there have been quite a lot of experiments like this but not in scientific enough environments (or on a large enough scale) to write about properly.

Everything bar the pop seems to come firmly down on the side of using screw caps, especially now that there has been a good amount of R&D to make them as effective as possible. I’d be very happy never to use a corkscrew again and be confident of the condition of the wine I’m buying/storing. I suppose Diam may be a decent enough compromise.

It seems very hard to reach any general conclusions about this. However, drink in the first 2-3 years, or after ten, is not a bad rule of thumb. Drinking ten year old kabinett riesling for the first time was one of the great wine revelations of my life.

I’m interested in your comment about Northern Rhone reds, as I would include them in the category of ‘wines to drink between 5-10 years’ (except Hermitage but that is really a law unto itself). Syrah needs a few years for the acidity and tannins to settle, but after about 12 years it can fade quite fast in my experience, even Cote Rotie. This may be personal preference as many people do keep them for much longer, including John Livingstone Learmonth, whose drinking windows often stretch for decades even for relatively modest wines.

general perspectives on the idea of dumb phases

I was curious about this from a slightly different angle about a year ago, and some good chat about it ensued here:

What is the science behind wines "shutting down"? Drinks Chat

Not something I’m particularly conscious of having experienced first hand, but I’ve noticed increasing mention, over the past few weeks on the community, of the possibility of wines “shutting down” or being in their “closed phase”, so curious to learn more objectively about this. Many of us pay attention to drinking windows; some wines drink well young, and then quickly fade. Some don’t and need to slumber for years or sometimes decades…and then we hope they’re not past their best when we crack…

Thank you this makes for good reading! I did a quick search but failed to use the phrase shutting down so missed this one.

@Jimmybob, on the Northern Rhone reds point, I think I had seen this about Cote Rotie in particular. I’d heard it anecdotally but also read it in a publication - can’t remember where now. However, as you say, it’s impossible to reach general conclusions, and personal preferences (and conditions) must play a big role. The last Cote Rotie I had was 7 years old and superb.