I’ve recently moved into a shared house I found via Spareroom with three other guys I didn’t know. The place has been nice, everyone very friendly and tidy, really about as good as you could have hoped for from Spareroom. We have a large garage thats nice and cool, so perfect for storing the wine I’ve acquired over the last couple of years.

Last night I really fancied a bottle I knew I had (Guy Breton’s Chiroubles 2018) so went to grab it from my rack but it was nowhere to been seen. I checked in the few boxes of wine I had next to the rack, but it wasn’t in any of them. I thought I was going a little bit mad but then I remembered two weeks previously I’d taken a picture of the wine rack, just so I could be certain people weren’t pinching them, and low and behold, there it was (the green cap near the bottom). 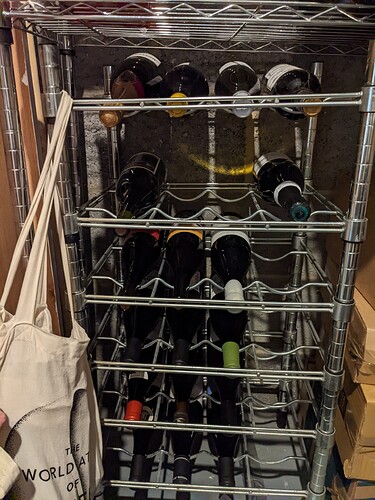 Looking at this picture I realised, hang on a minute, my bottle of Tissot Patchwork Chardonnay 2018 (top shelf, yellow cap) had also gone, and wait, so had the bottle of Boulevard Napoleon 2017 (red cap, bottom shelf) that a friend had bought me for my birthday last year. There’s even a further two bottles (Chanterves Bourgogne 2013 and
Jean-Marc Burgaud, Beaujolais Villages 2019) that I’ve now realised were missing before I even took the picture!

I offered an ultimatum to my housemates, that the money to replace the wines (a total of £122) be left on the table overnight otherwise the situation be escalated, and thankfully someone has done so. Unfortunately, bottles like the Tissot are hard to get hold of (especially at TWS price I paid for it, the cheapest I’ve seen it is £13 more a bottle than I paid originally), and the Chanterves is basically impossible to get hold of now Shrine to the Vine have sold out of it.

Ultimately, I’m glad that someone has sorted this. Obviously stealing is unacceptable, but I recon they didn’t know the value of what they were drinking and given their clear guilty conscience I recon it won’t happen again. I’m looking forward to be able to pick some bottles to replace the lost ones (I might treat myself the Tissot’s Les Bruyères before it sells out on TWS) but at the same time sad that I won’t be able to drink some of the wines that I’ve cellared for the past couple of years.

Enjoy the bank holiday everyone, and I hope no one ever steals your wine!

Ultimately, I’m glad that someone has sorted this. Obviously stealing is unacceptable, but I recon they didn’t know the value of what they were drinking

Hard to imagine how anyone could have thought it was OK to drink somene else’s wine (or beer, or spirits or whatever to that matter!) without asking, regadless of value. Great that you manage to sort this out without having to escalate things.

Hope you manage to replace at least a couple of them

Start checking your recycling each week. That should give you a clue!

That should be thieves by the way!

Eugh. Not good at all. At least they got paid for but I agree with @Inbar, the cost of the wine is neither here nor there when it’s about respect for other people’s property.

I had a similar (but less extreme) experience as a student, when I guess it’s marginally more expected (but still rubbish!). I’d bought a mixed 12 from Majestic (back when you had to buy 12 to get the discount!) on student loan day, to give a few weeks drinking. I went to visit some friends for the weekend to find one of my housemates had polished off the lot. On confrontation he did replace them (with 12 of the cheapest bottles majestic did sell, which even as a student I didn’t do), the following weekend he polished all those off too. When confronted again his response was “Yeah, but I bought those”. Oddly enough we didn’t live with him again the following year (the rest of the house stayed together).

I hope you manage to find some enjoyable replacements and still have a few lovely treats left!

Ultimately, I’m glad that someone has sorted this. Obviously stealing is unacceptable, but I recon they didn’t know the value of what they were drinking and given their clear guilty conscience I recon it won’t happen again

I admire your positive take on this.

Personally, the fact that the person(s) who did that, did not personally own up, and apologise directly to you, means I would not trust putting bottles (or any valuables!) where it can be accessed by someone else.

Apologies - never been great at spelling!

Yes I don’t feel great about it to be honest. I’m going to catalogue them all and seal them in boxes, photograph and check every week. Unfortunately my bedroom is very warm already so it’s either keep them in the garage or risk ruining the wine completely. Despite being upbeat that it’s sorted I still find it baffling that someone would think it was ok, or even if they knew it was wrong, be so brazen to take a bottle a week for the time I’ve lived here and expect me not to notice. The person in question was also borrowing my wine glasses to drink them!

There’s lockable small wine fridges, but then that sort of defeats the purpose of having a nice temperature stable garage which you have and the expensive of said fridge. I wonder if there’s a lockable rack or similar that might work?

Sorry for saying, but when I read your title I thought it was about one of those devices that remove a small amount of wine from a barrel for tasting purposes.

I’d really struggle with trust following your situation. Now they think they can just pay you back for anything they drink, there’s not even a moral boundary to cross if they fancy a nice bottle.

The affect of trust in the human race I find was the biggest short term impact when I ended up flat sharing with a thief. He worked in a hotel and would come home with steaks and whisky bottles before the long opening hours of supermarkets these days. He would kindly offer the odd dram but with this appearance of alcohol on his return late at night got me very suspicious. The day I decided to challenge him his sixth sense must have kicked in as he disappeared. On searching his room I found some of my underwear he had “borrowed” and a letter from his parole officer which was when I discovered his true calling. Suffice to say his letter indicated he had missed his appointment with said officer.

The bit I found somewhat ironic was when approaching the police to try and get an address to serve him a small claims court notice they said they could not give his details. Protection for the rights of criminals in the parole system🙄. Luckily I had no wine stocks in those days to loose but I am guessing the hotel he worked at was in a different boat.

Just to make it clear I was not going through the small claims court for my borrowed underwear (if only) but the fact that the utility bills we had divided up had not been and he had been ring up a substantial telephone bill including calls to Australia back in the day when this was a tad expensive.

This happened to me with 2 different flatmates. I was away for a week, came back and Flatmate no.1 had drank 6 bottles of my wine. Tbf, it wasn’t anything particularly expensive, BUT he hadn’t even attempted to replace and when I asked him to, he came back with Gallo’s best…

The second time it happened, I was the one renting out my spare room in Edinburgh, I kicked her out. (She was also always late on rent, bills etc… .)

Yep rings a bell. I have a pretty photographic memory of wines I’ve bought and stashed away and have two anecdotes. One forgivable and one not; both relate to my cellar (in a small under the stairs room) in France where most of my travel souvenirs end up.

First up - a single treasured bottle of Pera-Manca 2008, from Cartuxa in Evora, Alentejo. You can only purchase a single bottle per person and only if you do their paid guided visit, unless you use the secondary market (https://www.wine-searcher.com/find/cartuxa+pera+manca+tinto+alentejo+portugal/2011/uk). Cellar door price - it was about £90. I was going to save it for my 60th birthday which would have been 6 years after our visit there in 2014. Doing an inventory a couple of years ago, I couldn’t find it. Very likely was spotted and stolen by the (subsequently -proven) thieving Portuguese cleaner that ToH had at the time - by then given her notice for an unrelated infraction about a year before I spotted the disappearance . Still spitting nails over this.

Second-up - step forward ToH herself. I entrust her with our cellar treasures when I’m over in the UK. I label each wine with one of those plastic collars which accommodate wipe-clean pen writing. I spotted a discarded collar a few years ago, it was a Luis Pato Quinta do Moinho Barirrada 2000 which we bought two of when we visited there in 2017. Now, these are pretty closed for at least 20 years, need a good airing and decanting, only work with food, and I certainly didn’t remember opening one. Why would I. Yep I-can-tell-no-lies ToH did own up. Seems she was short of any Monoprix plonk to offer one of her chums and spotted these two and thought oh well there are two of them and he won’t notice. It seems neither she nor her chum liked it very much (as an afternoon quaffing drop). aggghhh.

He was like that pretty much constantly, so it was very obvious. I’m not sure whether or not he got a degree, strangely enough.

The weird thing is he clearly has absolutely no interest in wine whatsoever - there wasn’t even a wine glass in the house until I arrived. If he did have an interest I’d be more than happy to have dinner together and open nice bottles, but that so obviously isn’t the case.

We also live 5 minute walk from a Tesco so maybe in future if he fancies a drink he’ll go there and get a £5 bottle instead of stealing a bottle that will ultimately cost him £20+.