Hope everyone is surviving in lockdown! I was very sad to have to go elsewhere for wine whilst The Wine Society is also in (semi) lockdown, but applaud them for looking after staff, customers and delivery teams. Thank you for your consideration.

I was curious if anyone had come across this before?

I know inert gas is used by many to preserve wines (and other alcoholic drinks) but my colleague swears by this.

Anyone used it? Or use an alternative?

But it cannot prevent oxidation: the moment you open a bottle you let oxygen in and that combines with the wine. Pouring the wine into a glass aerates the wine in the bottle even more.

A one star review of this particular thing reads in part>

The can says “Private preserve blankets the wine’s surface”. This can’t be right; it reduces the amount of oxygen by adding inert gases but forget any idea that the Private Preserve gases sits on the wine surface, the gases just mix with the standard air in the bottle. Check Wikipedia under Gas | Dalton’s Law.

I am not a scientist, so I don’t know about Dalton’s law; I think that if the inert gas is heavier than air then it would provide a seal on top of the wine preventing further oxygenation, but the process of oxidation started the moment the bottle was opened.

You don’t say how much wine you are taking out/leaving in bottle or how long you want to keep the opened bottle. I reckon this device will keep the wine OK so you can have one glass over the next 5 nights, if the wine is robust enough, but then you’d get the same by reclosing the bottle immediately after pouring a glass and keeping it upright in the fridge.

UPDATE: The Coravin is sworn by by some (sworn at by others) for taking a glass out from a cork sealed bottle and replacing it with inert gas (by sticking a hollow needle through the cork), and a new cheaper device - The Repour - uses a disc to sit on top of wine to provide a seal - read about it here with comments:

Have to say we still don't really see the need for leftover wine preservation tools and systems, but I know some people find Coravin and the like...

I recently purchased this product, it is pure Argon. It blankets the wine, so that further oxygenation is restricted. 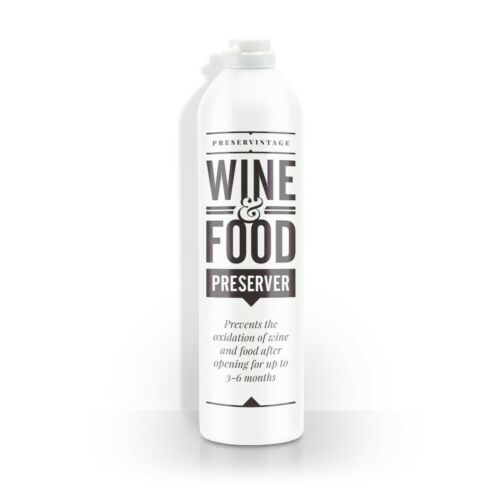 Mouse over to zoom

I buy it on eBay and it is £11.99 per can post free, with discounts for a bigger order.
I bought 3 which will last me for several years. You just have to be judicious with the size of your squirt!!

I’ve used a few of these gadgets. i can believe an ETO does a decent job, but it costs a lot of money. Coravin more than decent, but even more money.

i prefer just to put the recorked bottle back in the fridge. i like to observe the natural effect of oxidation, which is sometimes a positive (esp for more expensive wines, above all reds from certain regions). None of the gadgets I’ve used have preserved the wine as it was, and all have made it less interesting than simple recorking.

I’m not at all convinced by these. Without wishing to get too geeky…

The Amazon comment is quite right that simply “spraying” in a gas like this cannot prevent future contact with oxygen, though Dalton’s Law is probably not the best reference. Even if the inert gas were significantly denser than air, you’d have to have some means of “pouring” it in, to prevent it from mixing with air as it came out of the “aerosol” (not an aerosol really, an aerosol is actually a suspension of fine particles in gas). You’d have no means of knowing that you’d successfully covered the top of the wine, as the gases are clear and colourless, and most bottles are semi-opaque anyway. But even then, a process of diffusion would immediately set in, and the gases in the remaining air in the bottle would mix with the inert mixture and come into contact with the wine. Gases of different density don’t stay separated for long - the thermal movement of the molecules rapidly overcomes gravity.

The gases are nitrogen, argon and carbon dioxide (according to the page on Amazon). These are all part of normal air, and nitrogen and argon are of almost the same density as air (nitrogen slightly less, argon slightly more). Carbon dioxide is a bit denser, but it’s still going to mix very rapidly, and you’ll just be left with air. I’m afraid that the same is true of the argon spray.

A Coravin can work because it injects inert gas and leaves the bottle sealed, so no extra oxygen gets in. Any attempt to blanket the wine in a bottle from which some has been poured is doomed, as you’ll never be able to force out the air that’s already got in, so even resealing after “spraying” in won’t work.

TWS used to sell these and I tried them. They are moderately effective but not ideal and a bit of a pain, frankly. They get the gas to the wine surface and eject the air by use of a straw thingy that fits onto the nozzle so the gas is sprayed in quite deep into the bottle (not into the wine itself though).

The repour thing looks pretty much identical to the ‘Antiox’ stoppers that TWS also used to sell. This also worked moderately well. I think the principle is that there is something in it which reacts with oxygen more readily than the wine itself. they have a limited lifetime before they are exhausted.

Personally I have now switched to using the eto which is still not perfect but I find works better than either of those two options, and doesn’t require new gas or new stoppers, so expensive up front but maybe cheaper in the longer run.

Of course none of these will remove any oxygen already absorbed (diluted?) in the wine due to the action of pouring. Which is where the Coravin wins out as no oxygen is introduced into the wine when ‘pouring.’

Toying with the idea of getting an Eto. Coravin would be like buying a Rancilio, but, hey, i have a Gaggia…

i do actually like to see how wines change with oxygen, though. And then the number that are actually better next day is quite surprising.

I use private preserve and while I am no scientist certainly I think it has an effect. I have opened reds and gassed them and come back more than a week later and they are still fresh and bright. I keep them in the cupboard. Maybe I am a philistine but I rate it and will keep using.

It expensive per can but it lasts a long time. Months and months. I use maybe three a year.

FWIW, I recently watched a video of Laurent Ponsot, considered one of the more cerebral winemakers, and he was using it. Good enough for Ponsot, good enough for moi.

No bottle is ever going to make it beyond 24 hours in my house.

I think you have absolutely no need of a preservation implement! Eto is a nice-looking decanter and nearly always keeps wine at first-glass condition for a few days, but… no point for an overnight stay in the fridge.

Except Musar, of course, which normally needs at least 48 hours open to reach its peak

People keep telling me this. I’m neither organised or disciplined enough!

I tend to just decant half the bottle into an old half bottle, stopper tightly and keep in the fridge. Very little degradation seen over up to a week or so. One caveat - almost entirely unsuccessful with burgundy, which has me thinking a coravin could be useful just for that!

Can’t be more disorganized or indisciplined than me! It’s simple - always open another bottle when you open Musar. Drink a goodly amount of the other bottle. Taste the Musar. Revisit the next day (and probably repeat).

No, i hardly ever found a Burg that was better next day. Quality S French wine, esp Languedoc Roussillon, is in my experience often better.

I use vacuvin, pump out the oxygen and leave bottle in fridge.

If I may offer a little amateur conclusion, in my experience I think the natural acidity of a wine is generally a good pointer to how long it will stay ‘good’ when opened. Madeira has naturally high acidity and VA, as does Rioja.

But the best kept in a fridge - and I’ve managed 6 weeks on a 2/3rds opened bottle in the fridge with no noticeable loss of aromatics - is Petit Manseng. Which has incredibly high natural acidity.

And I have implored my other half to let us save some wine in the bottle more often, just so we could justify the purchase of a preserving gadget - but she always insists we finish the bottle. I feel helpless in the face of such overwhelming logic.

I think vacuvin is probably at the root of my mistrust of all these devices. To me it somehow kills the wine, strangles the life out of it. I don’t understand the science, but i know i usually prefer the recorked bottle (have tested this a few times!)

Going to have to test the Petit Manseng out. And about time i had some Jurancon.

One of these days I’ll bore you all with the full details of Jurancon.

But isn’t first-glass condition just what one would want to avoid?! Or maybe other people are more patient than me?

I almost always find the second glass is significantly better, even with cheaper wines.

Madeira is a slight cheat as it’s already oxidised. While I don’t actually agree with them, Blandy’s will tell you that a bottle of Madeira will keep for a year from opening with no problem.

I’ve never come close to being able to test who’s right though.