Tio Pepe En Rama 2022 is ready! Always look forward to this each year. 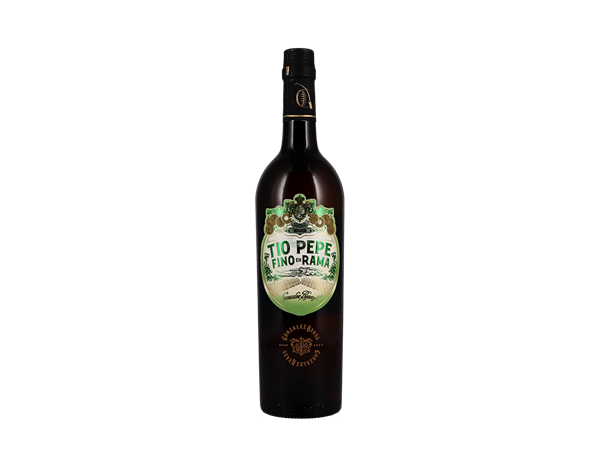 Just ordered a couple of bottles - always a nice spring treat as the weather gets warmer.

And delivery tomorrow! Hoping for a little sunshine to enjoy it.

Me too! Perfect summer tipple

The best value manzanilla around? Big chamomile nose, plenty of length, some complexity. 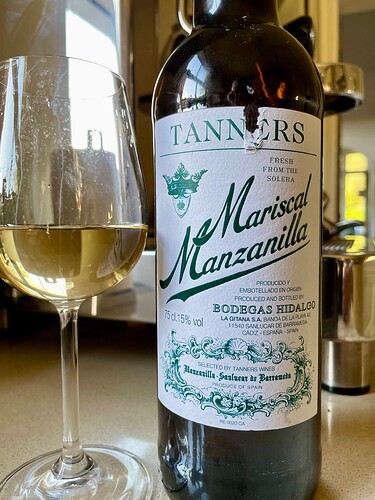 Wow! Fast delivery. This is lovely. First impressions are that it’s more intense than the last few years. Excuse the Toro Albalá glass. 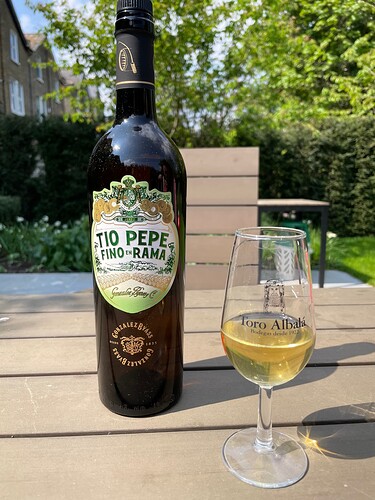 Much as I am interested in sherry, I have never managed to find one that really does it for me. Love it in cooking and as a vinegar, but the overtly oxidised flavours generally spoil it as a wine for me. It’s the vegetabley complexity that I can’t really get over. I’ve enjoyed tiny amounts of PX, and the Williams and Humbert “As you like it” one I bought from TWS a few years ago, but have never managed to find a drier type that I could abide.

I am reluctant to give up, because it’s so cheap, but wonder if anyone has any specific ones they could recommend trying, perhaps in as acidic and fresh a style as possible?

I also previously tried the Palo cortado recommended earlier in this thread by inbar and really didn’t enjoy it…I am also prepared for the feedback that I am just not suited to this particular club!

I am less enthusiastic about Sherry than I feel I “ought” to be. But I do like Manzanilla (and to an extent Fino Sherry). While not particularly acidic, it is certainly fresh, and carries its 15% ABV well.

In many respects, generally (there are arguably exceptions) treat it as an unfortified white wine - serve it cold, and don’t keep it more than a couple of days. The ABV is not that high compared with modern unfortified wine, and I think it works well served in a normal wine glass, and drunk with proper food. But of course it also works well in smaller quantities with nibbles, and is my favourite wine to drink with olives

Ok thanks, I will try a Manzanilla with some olives next.

I’d agree that you need to drink fino and amontillado quickly, but in my experience palo cortado and amontillado keep happily in the fridge for a few weeks - and being able to sup 'em at leisure around other drinks is one of their big advantages for me. And PX seems to last forever!

If the oxidised notes/style put you off - then it’s worth giving Manzanilla or Fino a go (the Society’s Fino is a softer style, so might work better for you) - as per Steve’s suggestion. They are aged under a layer of flor, so not oxidised in style.

As you say, however, Sherry might just not be your thing - and that’s OK too. Plenty of other styles of wines to enjoy out there

Interesting you said that! I ordered my En Rama yesterday about 3pm and it arrived today at 9am! However, it was supposed to have been delivered on Monday next week. If it had been last week, we’d have been out for two days! I am not complaining at the swift delivery but why do they offer a set day for non-WS vehicles and then let them do as they like. Madness.
Delighted with the En Rama though! 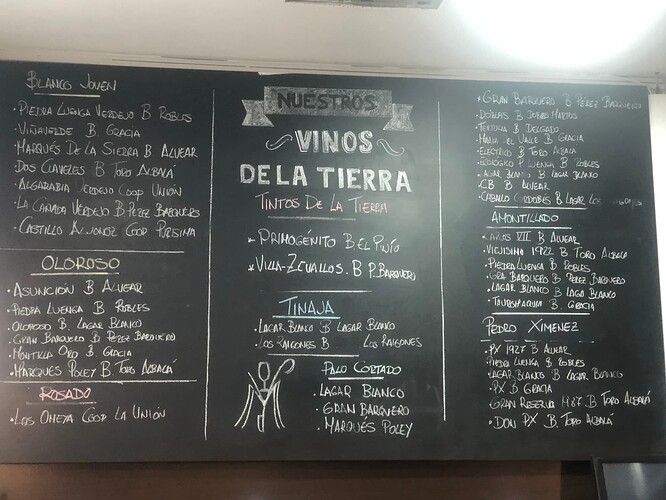 Oh, those are great choices.!

I always have a fino/manzanilla fina in the rack and an amontillado/palo cortado/olorosso on the go That Amontillado is new to me. Now in the basket for next month’s order

The Manzanilla Pasada is s-o-o-o-o good too.

What did you try?

Slightly embarrassing. No clue. I had a fino, another different fino, and Amontillado and a PX. All were delicious and I know the PX was a Don PX.

The winner so far was the Fino from Taberna Mezquita, which I believe they make themselves and was definitely just taken from the barrel. They also had a great list of local wine (although they seem to favour international varieties here, most reds are Syrah dominant and the only one I had was a bit of a jam bomb), so I may go back. I felt a bit taken a-back as it was nearly 2euro. Most have been around one.

To tie it back to earlier “I want to like Sherry butt…” (see what I did there?), these Montillia-Moriles wines, which are PX vinified in a solera/Sherry style are a little rounder than Sherry. They’re unfortified as PX can get to 16% on its own. I’ve not tried looking for them online yet, but this might be one of those “can’t get them anywhere other than here” type suggestions!

Many thanks for the replies. I will look into all the recommendations.

A real favourite here too. We’re ‘Nuts’for it…. Sorry!