Just over two weeks until Christmas…

We’re continuing our weekly Christmas topics and this week we’d like to know:

The first fizz you open to toast Christmas Day, the wines for your Christmas courses, a sweet wine to accompany the Christmas pud and your wines to see the evening through?

Please do let us know which wines you’ll be enjoying. If you’ve had your wines delivered already, we’d love to see photos!

Haven’t finalised the whole meal yet but pretty sure it’s going to be Felton Rd with the bird!

This is (probably!) the line up for both Christmas Eve with the daughter, and Christmas day just me an my old man: 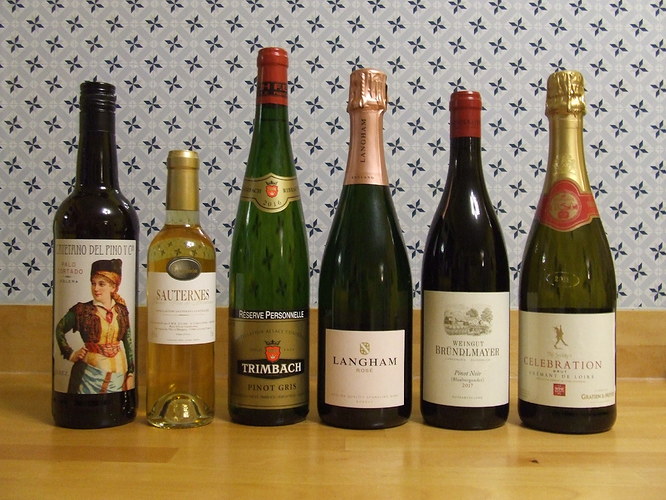 Mulled wine to start Christmas Eve when the girl is back from work, followed up by The Society Celebration Crémant de Loire - though the girl is making some noises about a Baileys Mud Slide cocktails instead of the fizz…

Hm! Not sure about that…

The main will be wild mushroom parcels so I think we’ll be opening the Bründlmayer Pinot Noir to go with it. Dessert will be Bûche de Noël, so likely to have some (yet unpurchased) Maury.

Christmas day will start late, as usual (4pm-ish) after a long walk, so my current plan is to make smoked duck breast and figs salad to start, accompanied by the Langham Rosé, which we bought after a tasting there in August, and which I thought was an absolute cracker.

Main is Porchetta, and so it’s likely to be the 2016 Pinot Gris 'Réserve Personnelle’, which we bought after a tasting at Trimbach last month. I was considering this instead, but I just love the combo of pork and Pinot Gris… so unlikely to change.

Finally, some Ulysse Cazabonne Sauternes, to go with (probably) Panatone bread and butter pudding, as is the tradition in our house, and maybe some cheese later with a regular favourite Palo Cortado. If there’s room and/or cheesy inclination…

Now bring it on!

British Christmas day, late lunch (with trip to pub beforehand) - no idea what I’m cooking, likely to be beef or chicken. I do however have the red wine sorted:

Boxing day, depends on the weather - ideally it will be atrocious and blowing up a blizzard, so I have the hills to myself. In which case I usually enjoy an unwise walk in the high Pennines - and reward myself when I get home with a fine 30 y/o whisky.

I don’t spend too much time thinking about it, but tend to just get a nicer bottle for the day. My parents, brother and his partner, who I spend the day with aren’t fussed about ‘nicer’ wines and don’t particularly enjoy the ones I buy! I don’t think they particularly like Burgundy, but since it’s usually above my price bracket I like to have a bottle on Christmas day so this year I just won’t bother offering it them

I usually just have the Burgundy around dinner and then a more comforting heavier bodied red later in the evening.

Not sure what fizz I will open on Christmas morning, I actually have have a few to pick from for once so will either be Pol Roger or:

The Burgundy I bought recently:
https://www.thewinesociety.com/product/nuits-saint-georges-premier-cru-bousselots-domaine-jean-chauvenet-2011

and the more comforting one for later maybe:

Well, I had offered and subsequently believed I was going to be sorting the wines for Christmas lunch at my in-laws, only to be told they had been to Waitrose and got the wines, so I didn’t have to ‘worry!’

Anyone know if Nanny Goat Pinot Noir is any good? Also some Jadot Beaujolais Quince that I’m sure will be a bit on the youthful side.

My wife has told me just to bring my own bottles, of which they are all welcome to help themselves to, naturally. That’s the point, isn’t it?

I’m thinking of some Pataille Bourgogne Rouge, a few 2017 1er Cru Chablis, maybe some Cornas/St Joseph (Delas, Guigal). Nothing too extravagant. I’m sure there will be champagne and port as well.

The current plan is to have a couple of friends, my MiL and her partner with us on Christmas Day. The friends are also into wine and will probably bring nice things with them, but I’ll have the following ready to go:
I’ve got a local English sparkler for our aperitif - Hindleap Blanc de blancs 2016 from Bluebell Vineyards. We’re taking the kids to meet Santa on the Bluebell railway, and we’re regular visitors at Sheffield Park over the road so I’m keen to give the wine a go.
Dinner’s going to be traditional turkey but with a herby, citrusy, garlicky twist. Standard trimmings. We’ll wash it down with red and white Rhône - 2016 Gigondas and 2017 Chave St Joseph Circa. 2016 Fontodi and Exhibition Chenin on standby.
Our friends are bringing an epic sticky Chenin to have with the cheese and I might open the 2013 Royal Tokaji for the Christmas pud. The dessert wines are probably going to be the fanciest things on the menu, but I’m really excited about the whole thing. I’m roughly as thrilled about Christmas as my kids are this year.

I’m thinking of going for sparkles, sparkles and more sparkles, with a goose and duck roast.

The reasoning is that everyone who’s coming likes sparkling wine and are likely to enjoy the good stuff, giving me an excuse to open it up; sparkling wine feels like Christmas and makes me feel nostalgic; and I think it will go well with the roast.

I might crack on the day and get some madiran out as well, but for now I’m drawn to the idea of fizzing our way through a happy Christmas.

Thankfully, I bought a top up case of various sparkling treats a week or so ago so there’s plenty of choice.

I’m trying to, somehow, shoe-horn Madiran into Turkey. The equation doesn’t seem to compute at the moment.

(However, I get to pick Boxing Day main course - so beef it is - and that may mean a younger, fruitier Madiran may make an appearance (yay!)

With my parents this year, which means I get to choose the wine but not the food.

Brunch of smoked salmon with an inexpensive champagne (likely something on offer).

Traditional Christmas lunch with starter (more salmon, wine TBC but possibly a Pol Roger 2008, or a Samuel Billaud Chablis) at 1330, main at 1400 (Felton Road - Cornish Point) and really good Christmas pudding after. Wine match TBC, not an easy one but at least this pudding isn’t overly sweet so more options available.

Have lined up a couple of Hungarian wines.

Fingers crossed we can travel.

Fingers crossed we can travel.

Crossing fingers for you…!

Out of curiosity, does this name relate to the location (Pannonian plaines) or nothing to do with it?

Out of curiosity, does this name relate to the location (Pannonian plaines) or nothing to do with it?

Pannonhalma is a town, where Pannon indeed comes from Pannonia (the Roman province, present-day western Hungary, eastern Austria, northern Croatia, north-western Serbia, northern Slovenia and northern Bosnia and Herzegovina) and Halma means ‘its mound’ (so Halom is mound and ‘a’ is a possessive suffix). Pannonhalmi Foapatsag is the Archabbey of Pannonhalma who produce these wines.

A stunning place by the way.

Thanks for the explanation - I love a bit of etymology.
My daughter is hoping to travel in Hungary next summer (restrictions permitting). Might suggest she stops by this place!

Something along these lines 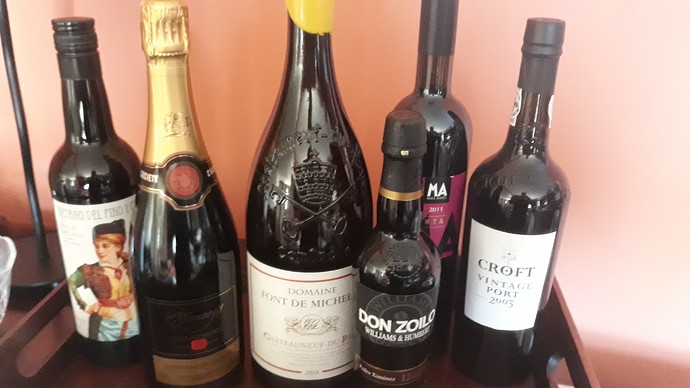 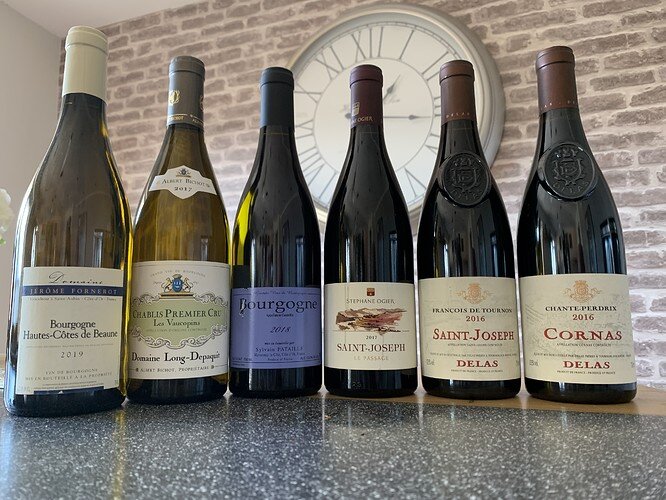 Maybe one more bottle of the Chablis, one less of the St Joseph’s. I will most likely bring one or two home as we never drink as much as I anticipate. Champagne/port not my responsibility hence none in the lineup

I don’t celebrate Christmas but I’ve sent a bottle of this to each of two good friends who do for their festive meals: 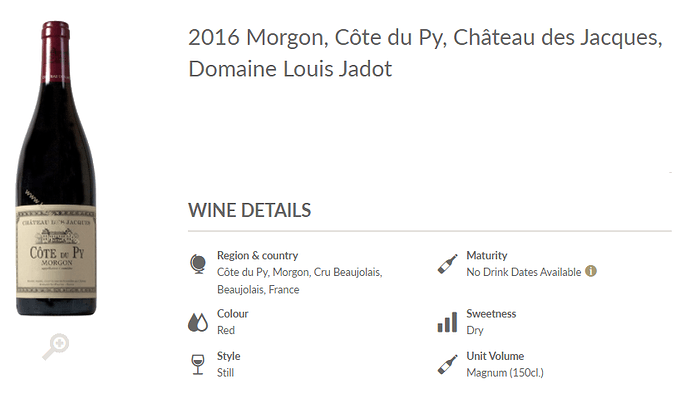 The joys of living vicariously!

A 2016 Seghesio Zinfandel to have with dinner

A 2001 Musar to enjoy in front of the fire in the evening.

Christmas Day is full of rituals so if it’s anything like normal we’ll also have a couple of Bloody Marys while making dinner, something sparkling just before it’s ready (probably a cheap Aldi Champagne or a decent Cremant as I’m a bit of a philistine when it comes to sparklers) and a mojito/ciapirinha/negroni or two to round the evening off.

My vote goes for a decent Crémant

So much more enjoyable in my opinion! And actually, most supermarkets have good, affordable ones now.