Just picked up two bottles of Boxler Sommerberg pinot Gris 2004 for £25 ib approx. Think this is a good buy.

Either way, I’m gonna keep some in reserves for later drinking - I just fancy trying them early as well!

I don’t know the Lezardes but I’ll probably have my first from my '16 Rosines either this year or next.

I tried one of the Lezardes 2015 about a month ago and it was drinking very nicely; took an hour or so to really wake from its slumber but I poured straight from the bottle, so a quick decant would fix that I’m sure. I have the Rosine 2016 in the cellar as well but felt it was earlier in its drinking window and haven’t broached one yet - though I do feel them calling me every time I stick my head through the cellar door! I’m sure it won’t be long before I try the first bottle.

Maybe I’ll just take out three of each

These just delivered for the postponed tasting with an order filler. 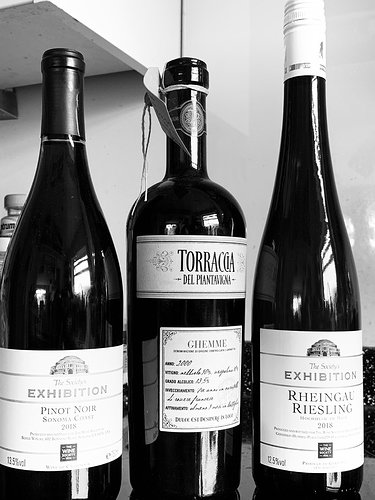 in dire need of white wine…

I decided to brave the DHL delivery and ordered a mixed case yesterday.

Some old favourites and a couple of new ones to try.

I had hoped to get the Mantler Gruner Veltliner, but it seems to have gone since last week, likewise the Tahbilk Viognier and the WS Saar Riesling

Just bagged a couple of these after navigating a little bit of mathematical weirdness in the shopping cart: 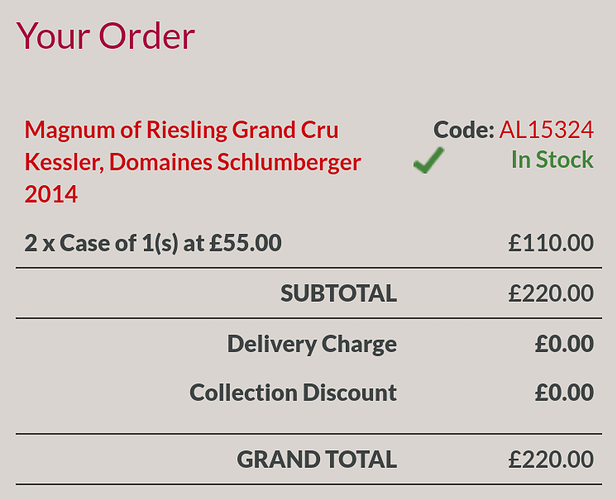 …and while typing this, my Chapel Down order from 7th May arrived, 6 bubbly bacchus and a magnum of NV brut. They even threw in a free 6 pack of Curious Brew beer. Oh joy!!! How did you navigate that weird maths? I can’t figure it at all!!!

After scratching my head for a bit, I just ignored it and pressed on to the payment screen, where it seemed to straighten itself out!
And the numbers are correct on the order confirmation email.

I’ve had very mixed experiences with the Rosine in past, to the point that i stopped buying it, despite having had some lovely bottles in the past. Basically the issue was wildly out-of-balance acidity. I love acidity in a wine, but this was completely out of order!

I bought one of these back in Nov 2019 and noticed the price had doubled in the total column at checkout. I queried the purchase with CS at the time they assured me all was fine. Just a glitch, they reckoned.

But ultimately £110 left my bank account and I had £55 credited back to my WS account. Surprised to see it’s not been fixed six months later.

Interesting, thanks for the heads up; final screen and confirmation email tallied up correctly, but will keep my eyes peeled. At the end of the day will all come good, no doubt. Have now hidden them away in a corner of the cellar in the hope I can forget about them.

A decade of temporary “early onset Alzheimer’s” might serve you well!!

It is driving me crazy not being able to access my wines in Reserves, I do not want full cases.
I have waited diligently and deferred withdrawal, expecting to remove wine every month or so. No one to blame, it is just ill fortune - but frustrating all the same.
And I will not join a clamour to “get on with it,” a safe process must be established so that I can get at my goodies.

I understand the frustration here, but am luckily not the in the same position. I have storage at home, so do not keep a large amount in reserves. I do have the last 2-3 years of EP which has not yet landed, but frankly I don’t mind if that is delayed beyond my reserves date of February.

Looking forward to trying the new vintage of Dog Point Chardonnay which I intend to deploy for a Zoom chardonnay tasting next week. I still have a bottle of 2016 in reserve if delivery for next Tuesday is missed (although recent experience is that deliveries are arriving sooner rather than later than expected). I thought I would try the entry level from Kumeu River 2018 which now included fruit from Hawkes Bay.

Domaine Gardies seems to be getting a bit of love (Rosemary George gave a good report on these wines at TWS) so keen to try this and maybe the next one up at some point if I like the style. Sherry for the improving weather. I thought the Washington State Bordeaux blend sounded interesting. And I do like a Greco (and Santa Venere) from time to time with summer food.

Just had a delivery This is the mystery case so see that thread

Also had a mixed half myself Excited about the alsace having seen the zoom meeting yesterday with the maker. Solace syrah is to die for , lighting the bbq.