I started my wine odyssey with Barolo from the (I think) 84 vintage from Fontafredda. I have had a soft spot for them ever since. It happened to be the dearest bottle of wine on a pub wine list. this would have been around 1989. Since then I have tended to try generic Barolo, Pio Cesare, Fontafredda, Bourgogno, Vajra, others too but these are the one’s I recall. I drank quite a few from the late nineties, 97 and 99 I remember when they would have been about 6 to 10 years old. This was followed by a bit of a hiatus while I got more into other regions. I did not notice communes but it is possible they were specific sites. I seem to recall Serralunga and Bussia. Sorry this is vague but I’m not always good with note taking. I remember having a Sandrone wine because it was expensive and I didn’t like it. A curious combination of harsh and oaky. The trouble is that I fear you have only added a further layer of complication in the shape of all these communes which I know I will have to get to grips with.

The trouble is that I fear you have only added a further layer of complication in the shape of all these communes which I know I will have to get to grips with.

Not at all! Piedmont isn’t easy no matter how long you go along for the ride. But remember, the journey is more fun than the destination

I suspect, from the Sandrone/oak comment that you probably prefer traditionalists, because as I recall from my sketchy knowledge, he’s a modernist. Trditionalists tend not to have noticeable oak flavours So here’s a list to give you a heads up of who produces what:

It’s a really good place to start (indeed, the whole of Wineberserkers is a great mine of information with regard to Piedmont/Nebbiolo/Barolo/Barbaresco - just use the search function).

I find berserkers interesting in parts if a little indigestible. I found rather too many people doing one armed wine press ups there for my liking, usually men it has to be said. But thank-you, I shall have a look.

Fair enough! I try to ignore the flame wars and just look for the meaty bits of information.

I was thinking that Jay McInerney wrote an essay on traditionalist vs modernist under the title of ‘the war is over’. Or was it someone else? Anyway the point being made was that these distinctions are becoming less clear.

It’s an interesting discussion. My own (very personal opinion) is that the modernists have dialled it back more than the traditionalists have modernised (if that makes sense?).

Beyond the obvious of winery hygiene (I’d say that’s universal in the whole world, no?), large botti of neutral oak are more ‘in’, longer macerations etc etc are back in fashion. It’s my hunch that it’s to do with the cru-isation (The Burgundying if you will) of Piedmont. And I suppose I’ve not tasted many (any?) recent modernists, because I discovered a few years ago that I wasn’t keen, so disengaged (mostly) from them. Maybe time to reengage?

Mrs B selected the last portion of @Tannatastic’s lamb and fennel dish for supper; that was originally proposed as accompaniment to Barolo.

Well, thanks very much for the recipe and proposed wine match, absolutely fantastic on both counts.

This might be a 2016 vintage, entry-level Barolo, but no one could say it isn’t drinking beautifully right now. Lively tannin and acidity sure, but approachable nonetheless, particularly with a rich dish like this. Bright red fruit and orange zest aromas and on the palate. 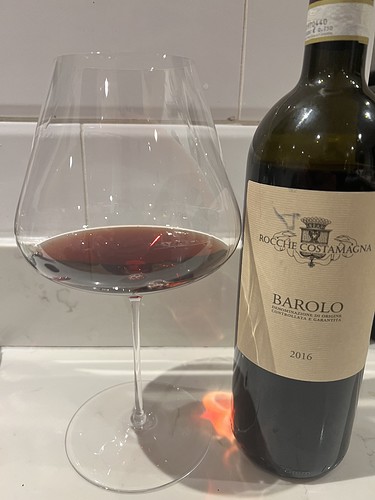 I’m getting told off by the site software that I’m talking too much just to you, but apropos of me trawling wineberserkers, I came upon this quote about 2013’s…

But in one case winemaking utterly trumped – crushed, obliterated and shredded – terroir: The Renato Ratti Rocche dell’Annunziata was so extremely barriqued that there was no chance of telling what village, let alone what country, it was from.

I can’t independently verify it, but the same person also referenced the Rocche Costamagna from the same vineyard as being much more in keeping (better?) ISTR a BBR video concluding the same (?). Save to say, Ratti’s wine is at least 2, or maybe 3, times the price of it’s competitor. TWS sells them both. I’d personally always recommend the Rocche Costamagna. Incredible value wines from an increasingly expensive appellation.

And @Brocklehurstj - I’ve a feeling that the leg of lamb in the freezer will be meeting the same fate, along with a 2013 Rocche Costamagna when I break my fast. Food and drink heaven, one of life’s great pleasures

I drank quite a few 2010s, 15s, 16s and 17s last year and they were pretty much all enjoyable, if young. I think 2013 may be the vintage least likely to be showing well at the moment; I find its tannins a lot more prominent than any of the vintages mentioned above.

I bought a case of this just after you did and broached the first one a few weeks ago. I agree. Excellent VFM and suspect it will improve despite its modesty. I’ll try and hold off the next one till the back end of the year.