What are you best wine-related Christmas memories?

It’s the 1st of December - the Christmas countdown begins…!

We are loving your contributions to our weekly Christmas topics - thank you all so much for getting involved and joining in with the Christmas spirit on our Community. (Here is the Which part of your Christmas meal do you plan first, food or wine? thread and the Should you invest more money/time in Christmas food, or Christmas wine? thread, in case you’d like to join in).

Continuing with our weekly Christmas topics, we would now like to know:

What are your best wine-related Christmas memories?

(These can be joyous, hilarious, meaningful or just plain silly!)

Let us know, we’d love to hear them!

tasting my first ‘proper’ wine as a teenager, not on Christmas day but in that season. I have no idea what it was - I was about 14 and I know it was a claret that was in the region of 30 years old. Even to a teenage unsophisticated palate I could tell that it was something special. It seemed really odd to me that something made of fruit could taste and smell of old leather armchairs, wood, dry leaves, and many other things not at all related to grapes. Still chasing that magic.

I think my most memorable moment would be the look on my mother-in-law’s face when she tried some 2003 Musar on Christmas Day 2019. She was not a fan.

This was no surprise of course. She doesn’t drink red wine at all, and doesn’t really enjoy dry white. She’ll be drinking moscato and white zinfandel with us this year. I did tell her she’d hate it, but she decided to go for it anyway…

Just before Xmas 1987 I received a profit related bonus from the company I worked for ( the National Freight Consortium ). After becoming interested in wine in 1985 it was the first time I’d had the budget to truly indulge myself. There was a nearby wine merchant ( Gerard Harris ) with a great list associated with, and just across the road from, The Bell Inn restaurant in Aston Clinton, Bucks who I’d bought wine from previously.

Anyway, I ended up splurging £35 on a 1978 Chambertin Clos de Beze which was duly opened with a roast duck on Xmas day. Although expectations were high it completely exceeded them. I’d never smelt or tasted anything that so engaged my senses like it before. 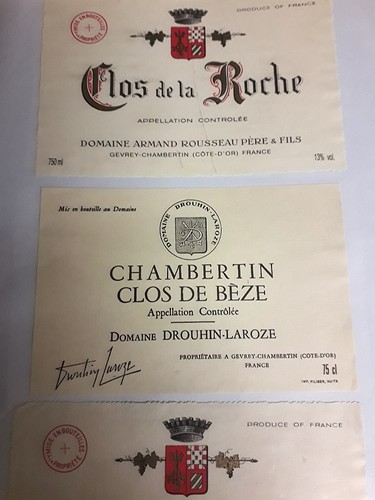 …they also had a 1982 La Tache on their list too, which I thought long and hard about buying, but that was just a touch too much at £64 !

What vintage was the Rousseau Clos de La Roche?

1983, and bought off the back of the Clos de Beze experience. From a High Street retailer (Wine Rack IIRC) for £40.

When I was a child, my parents (nobody drank wine in my early years) used to save up all year in a pay-weekly scheme in order to buy a Christmas food hamper. Included was a single bottle of Sauternes which they duly opened to enjoy with the cockerel and all the trimmings! Needless to say, there was always a half bottle left over as they said it didn’t taste nice with the gravy!!!

Definitely my best wine related Christmas memory was that every year, my Grandmother would come and stay with us for the whole season of goodwill and loved , I mean LOVED a glass of Mateus rosé.
So Christmas day she would have more than her usual glass, she would start with a cream sherry, then some Champagne and then on to the Mateus.
Invariably, she would fall asleep on a sofa at some point where myself and 2 of my brothers would adorn her with hair clips, rosy lipstick cheeks and the contents of our Christmas crackers .
At some point she would wake up oblivious to the fact she now resembled a clown and smile along with our screams of laughter, tears running down our faces. thinking she had missed a joke whilst sleeping…
Every. Single. Year !

I’m surprised you didn’t make her into a table lamp!!

we’re all going to get there eventually and only if we’re lucky!

And then there was the Xmas (1992?) where I got severe jaundice (liver poisoning) by absorbing industrial solvent through my unprotected hands. Turned buttercup yellow, only awake a few hours on Xmas day and couldn’t handle alcohol for nearly a year afterwards!

At the beginning the GP took one look at me and said ‘you will soon feel a lot worse’ and recommended bed rest for a couple of weeks. No medication, no hospital !

I had a bottle of Gevrey Chambertin planned for Xmas, it stayed untouched a whole year.