I opened a bottle of

One of my favourite Bordeaux second wines. A beautiful glass of mature Margaux. Just Lovely!

A beautiful glass of mature Moulis

Is Segla from Moulis?

Tried these over the last two days. 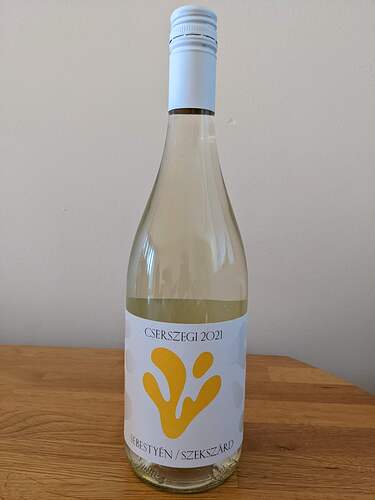 I think 'pleasant’ might sum this up best. An aromatic off-dry style of wine but had enough acidity to make it a nice refreshing wine on a warm evening. For under a tenner, a good punt. 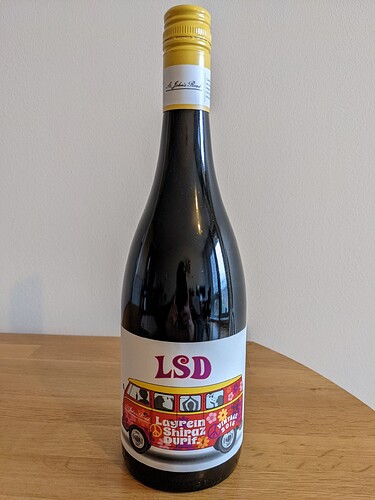 Loving this, rich and choclaty to say the least. Aroma just jumped out of the bottle, smooth, seamless, a typical big Aussie crowd-pleaser if you like. Gets my vote

Have a good week everyone!

Crossing today with no queues or delays.
Arrived at our hotel in Germany and now getting some rest to continue the second leg of the trip tomorrow 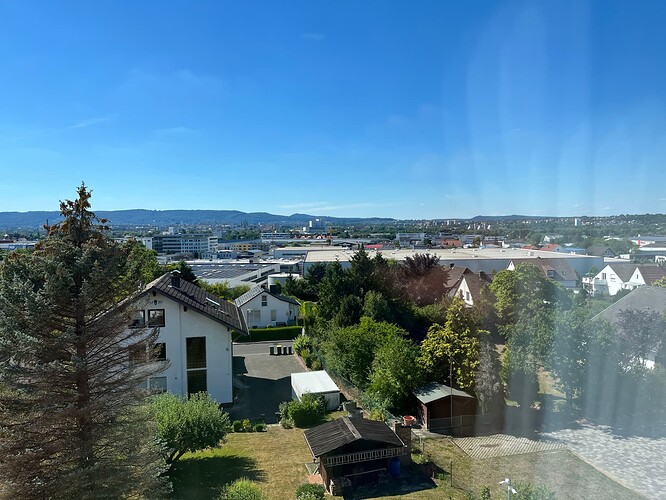 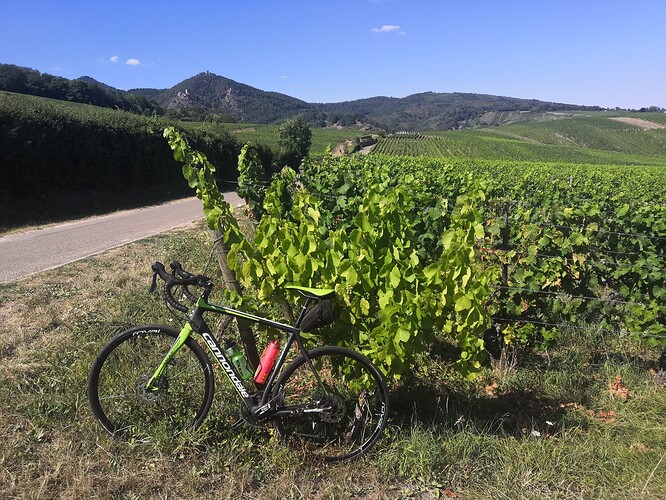 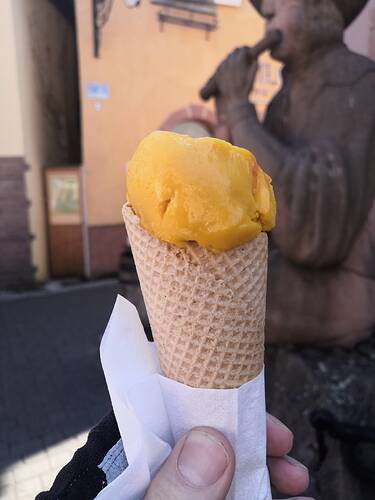 For eating in the garden this evening, I cooked a mixed vegetable stew (courgettes, onions, red pepper, garlic and potatoes), with merguez. And a lightly chilled glass or two of Christian Barthel Pinot Noir Clos du Sonnenbach, 2019. 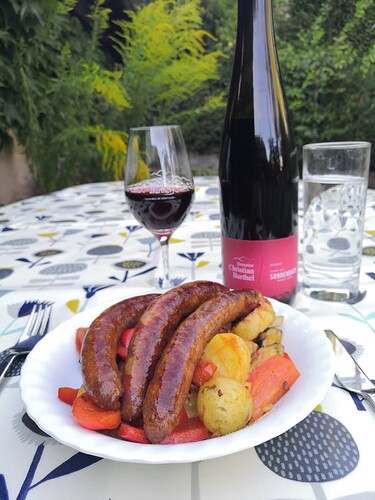 Unoaked and entry-level, and does all that you’d want it to, and then some more. Ripe fruit to the fore, and darker fruit than might be expected, especially considering that 2019 is more restrained than the vintages either side. But it also has a savoury, slightly liquoricy edge to it, and some smooth tannin too. Perfect garden drinking.

Hope everyone has a good week. Have a safe onward journey, @Rafa. Where are you heading? 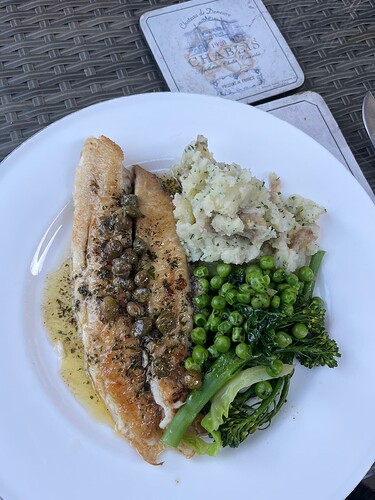 image1920×2560 391 KB
Paired brilliantly with a white Nuits St. George’s which I decanted as recommended on the burgundy thread. 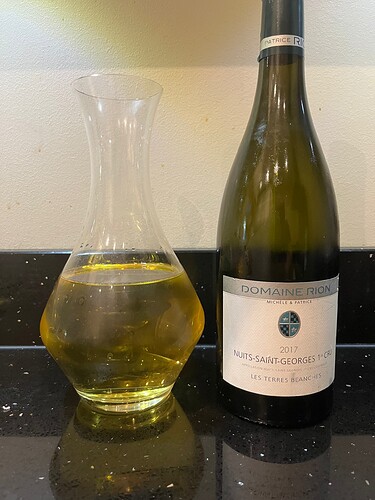 image1920×2560 386 KB
This was great, fresh acidity, flavours of apple, peach, pear, citrus, mineraly, butter oak and a light touch of vanilla. Very complex and drinking brilliantly and a great pairing with the Dover sole. Will have to look out for white Nuits more often.
19 Likes
sequentialogic August 7, 2022, 8:12pm #69

Is there anything better than a cold, bone dry, Rosé in this heat? Especially paired with a healthy slice of Pissaladière.

Earlier in the garden with neighbours

Recently discussed in this forum and imo a lovely drink.

Also often mentioned and a reliably good wine. The black fruit is still there but now it seems to have much more mocha/dark treacle/liquorice flavours. Dark and rich and delicious!

All this talk of France and we are not heading out until mid September….so tonight we enjoyed a Duras dinner …. 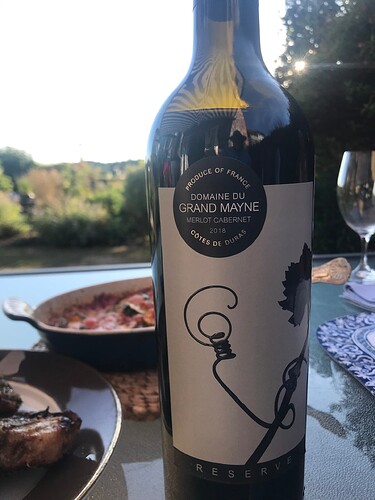 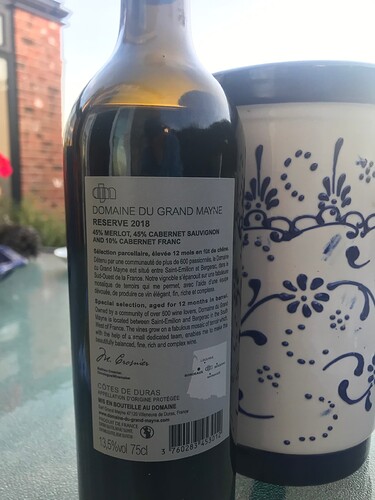 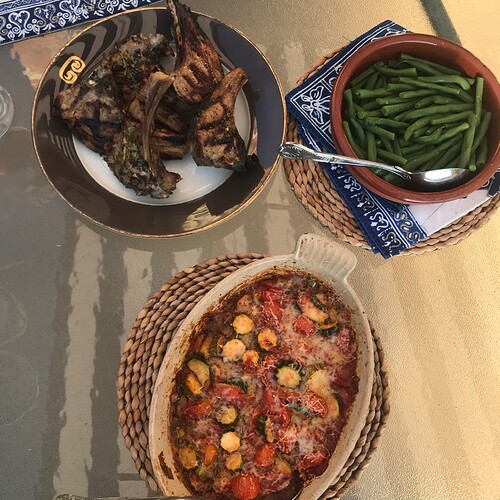 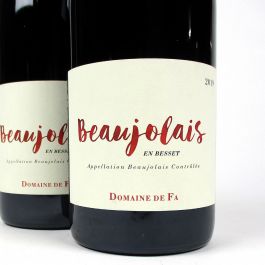 Beaujolais en Besset: Domaine de Fa 2019 - Since their first vintage in 2014, the Graillot family have produced this wonderful Gamay from 4 hectares of Beaujolais and Beaujolais-Villages vines on the climat of the Côte de Besset near...

I failed to follow the instructions to decant so yesterday it was a bit meh, a bit nouveau. But today it was superb. Lesson learned.

Tonight with braised beef and mash ( yes, I know, perfect for this weather you’re thinking - well I wasn’t expecting this weather, so …) 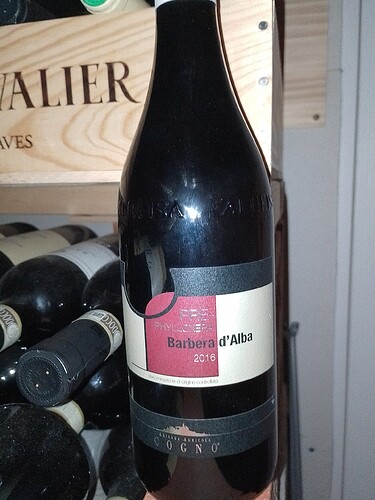 First smell reminded me of cave-aged cheddar, so that was interesting. It’s clearly a deep, dark, concentrated (extracted?) wine. And young. I think. It has that fruity/earthiness I associate with Barbara (sort of black fruits with beetroot, if that doesn’t sound too odd) but dialled up to 11. And the alcohol is a little obvious, and not well integrated. Which is a pity.

We’ve had it decanted for about 90 minutes, and frankly, I’m hoping it’s too young. As my other half said ‘hmm, it’s quite good, but it’s missing something isn’t it?’. I’ve emotionally (and financially!) invested heavily in 2016, to so far mixed results. I worry that it’s nowhere near as consistent as others have suggested. We shall see. To revisit.

We enjoyed the Lidl Barolo on Saturday. At first I thought the alcohol was a bit hot but it soon calmed down. The cranberry notes you mentioned came through and it worked a treat with the blackberry and redcurrant sauce. After dinner I noticed the tannins rather more, and ‘dusty’ was the word that came to mind, which on re-reading I see features in your notes.

I have one more bottle, for drinking sooner rather than later.

Perhaps not the weather but I fancied a red. Opened my 2nd bottle of Domaine les Alexandrins St Joseph. 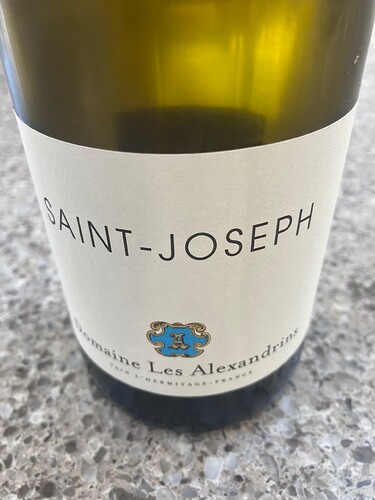 Savoury with blackberry fruit. Good grip and iron/mineral perhaps granite. Fresh with some pepper. Very good and drinking nicely despite it being so young.

We opened a bottle of Condrieu Combe de Malleval, Domaine Ogier 2015 for the weekend. I needed some inspiration for a match with melon and Parma ham so checked out the TWS food and wine matching pages. It suggested Viognier for melon so we gave it a try. Won’t be doing that again. Complete mismatch and a waste of a decent glass of wine.

Fortunately it was lovely with trout fillet, a homemade pesto dressing, new potatoes and home grown runner beans. Rich, peachy and mouth filling but not at all cloying. A good match. It is not going to improve now so a couple more bottles to enjoy sooner rather than later.

What vintage was it?

Had a similar experience with their Crozes. Will keep an eye out for this producer on the list.

Friday lunch with my chum at a place that allows BYO with a modest corkage; my chum wants varieties new to him so I brought 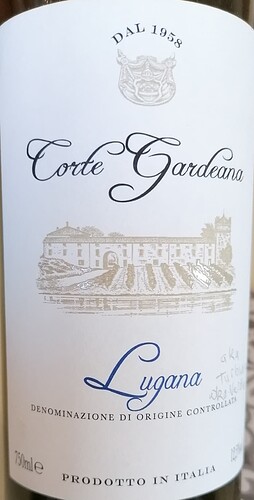 Lugana is one of the many synonyms for Verdicchio, and was a refreshing drink on a warm day which we both enjoyed.

Back home in the evening we had our usual plaice, new pots and peas with a mixed salad and 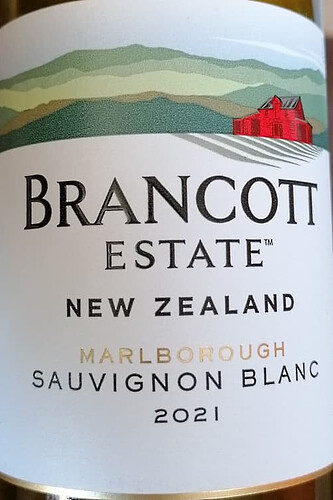 Saturday Our elder son and his partner arrived late on Friday so on Saturday we took them to what we still remember as the Mosquito Museum but has much expanded since our last visit decades ago and is now the de Havilland Aircraft Museum.

But first we lunched outside at The Green Dragon at its idyllic setting on the banks of the Colne river. In the past the pub has flooded when the river burst its banks but now the river has dried and the wide pool of clear water by the bridge where children paddled while their parents lazed on grassy banks with a glass from the pub was a tiny shallow muddy puddle. 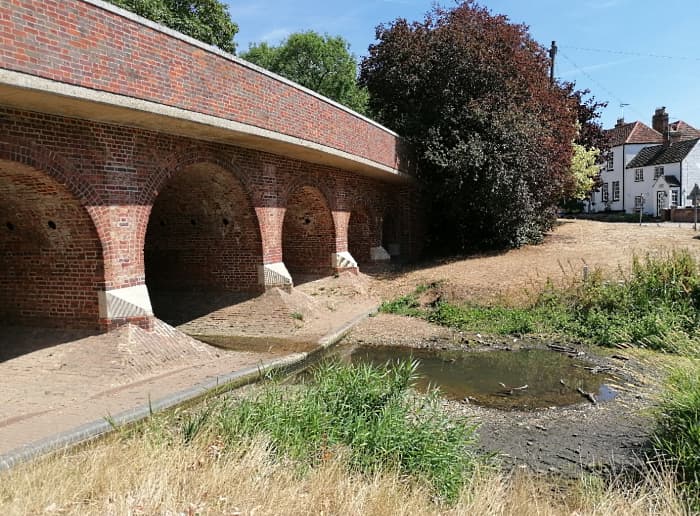 With our lunch we had 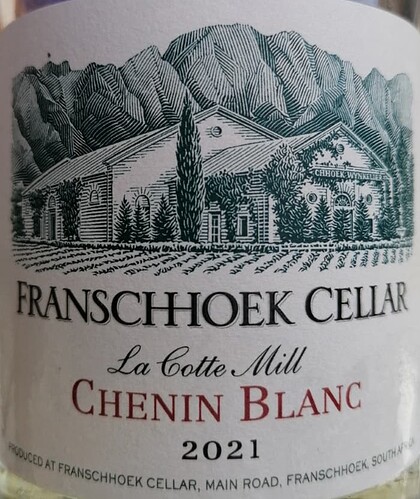 2021 Franschhoek Cellar Chenin Blanc La Cotte Mill (South Africa, Western Cape)
Chenin is my second favourite white variety, and although it’s made in every style one can think of, this was a perfect luncheon drink, being light bodied, packed with flavours, dry and refreshing.

Salisbury Hall, a (now dry) moated manor house in the country but close to the Hatfield de Havilland factory*, was where a team secretly developed and built the first Mosquito aircraft during the war. The plane was built of plywood and was so fast it didn’t need defences as no other aircraft could catch it. The first Mosquitos took off from the fields behind the Hall to go the De Havillands airfield. The museum has that first prototype, plus two more Mossies and a host of other planes and their parts. Many of the aircraft can be entered 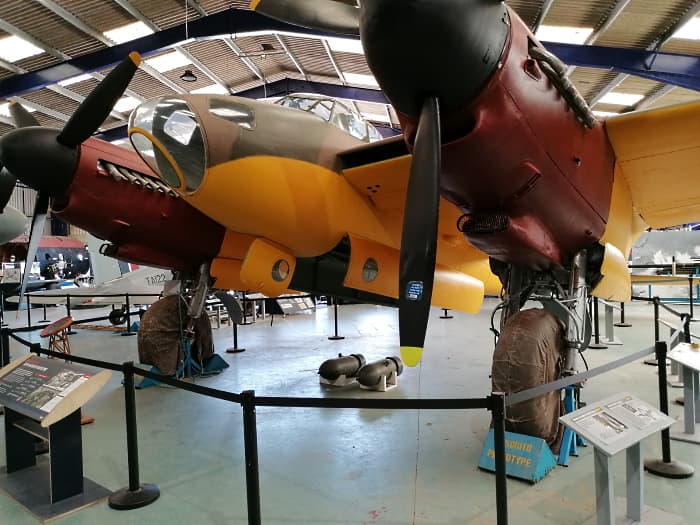 In the evening our guests chose a Deliveroo from Nandos. We had an aperitif while waiting 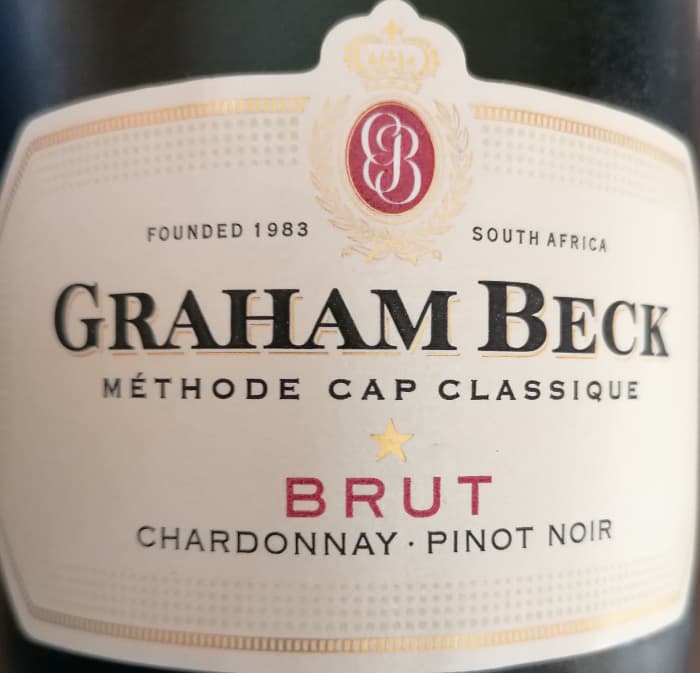 and with our piri-piri chicken we had 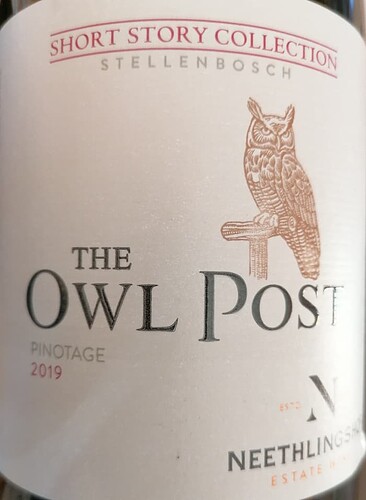 Both are the top 'tages of their respective wineries, superb wines and both different. There’s an underlying coffee hint in the Diemersfontein, which they told me is a characteristic of Wellington Pinotage, while the Neethlingshof had a lively sweetness.

Sunday we went to The Grand Junction Arms pub on the canal at Bulbourne to lunch with our younger son, his wife and our first (hopefully) grandchild. A lot of development has taken place since the Oakman Group took ownership and we’d booked a ‘pod’ in the garden overlooking the canal rather than risk sitting outside in rain. It was a lovely hot day and I had to wear my hat as my head was being burned by the sun 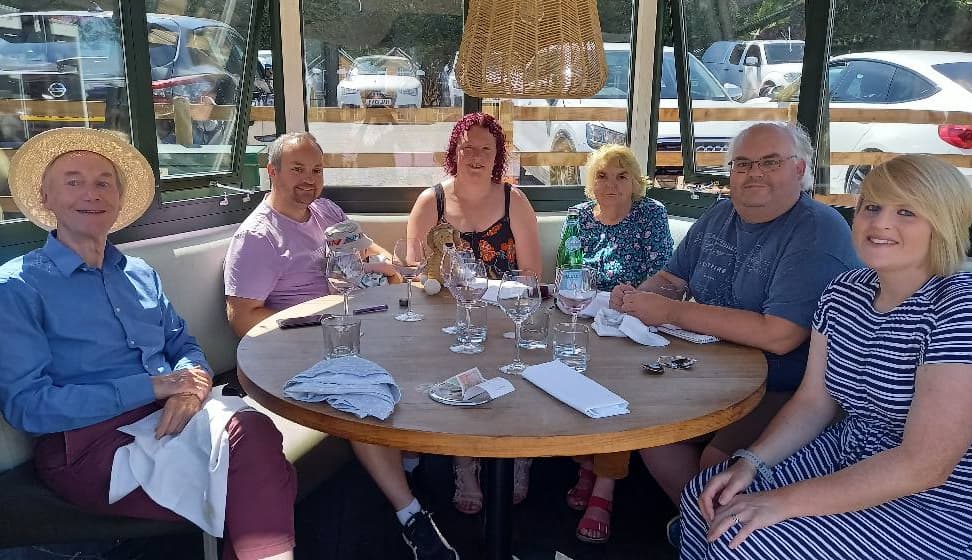 We all - apart from Jack - had Sunday roast, and the wine was 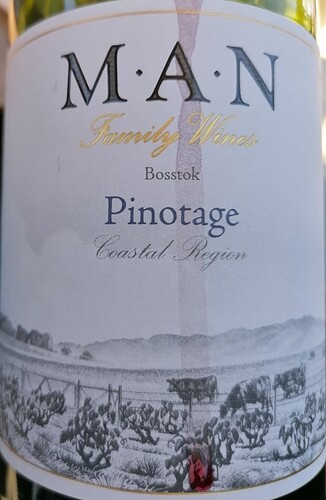 2020 MAN Vintners Pinotage Family Wines Bosstok (South Africa, Coastal Region
M.A.N are the initials of the three owners, Marie, Annette & Nicky and bosstok is the Afrikaans name of low lying bush vines. It was a juicy fruited wine just suited to lunch on a warm day while watching narrow boats pass by along the Grand Union Canal and catching up on family news. And holding Jack!

After his parents packed all of Jack’s accoutrements into a car which had grown too small, we waved them goodbye then we and our two guests took a stroll along the canal and around the Marsworth lakes. Then they left to drive back to Wales while we went home to the Sunday papers, tea and scones.

@gabehiggins I had that Cserszegi a couple of weeks ago and found it floral and flavoursome Weekend Drinking Thread - 22nd to 24th July 2022 - Drinks Chat - The Society’s Community (thewinesociety.com)