OMG I kept hitting refresh. I thought my internet had broken

So, what do you do whilst your wife’s in the virtual audience for the Infinite Monkey Cage on Radio 4 (when you’ve applied for tickets for every show, unsuccessfully, you apply on her behalf once and she’s successful!)…you open a bottle of Musar 2001, a box of Lindor Salted Caramel and put ‘The Strain’ blu ray on.
The wine is as awesome as ever, sweet, rich, velvety, haunting, not a hint of tannin, not really showing much age, just that Musar gorgeousness in spades. The chocolates and Tv are keeping me company in my sulk

So bringing Galicia to Scotland with some hake and Albariño 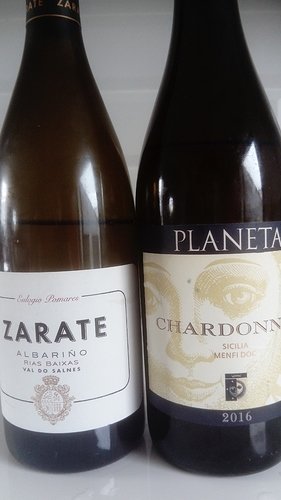 Mrs Gannet isn’t a fan of Albariño so Planeta Chardonnay for her.

Start the weekend with a cheeky Clover Club. My framboise must have aged, seems to have gone quite orange, I’m sure it used to be pink. Hits the spot. 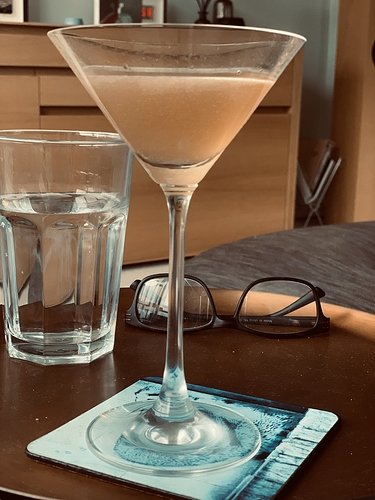 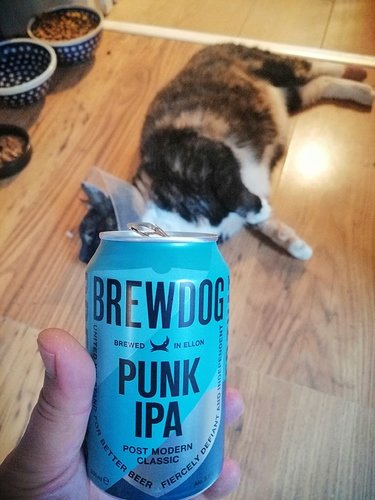 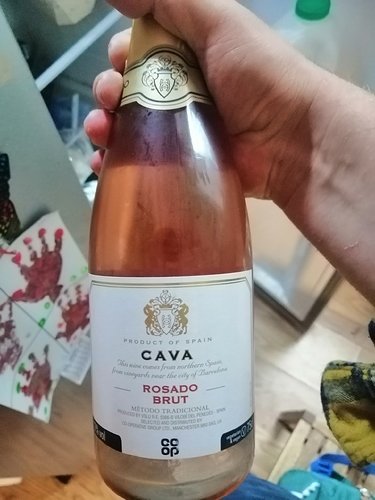 Then pink cava, impulse buy from the co-op.

Just a word on Punk IPA. It’s been around for a few years and is available everywhere I think because of its ubiquity I had forgotten how good it is. Funny that isn’t it. It’s almost like the Coldplay of beers.

Canon de Brem Canon-Fronsac 2000. Another wine from the delivery - the ones before being sent to storage (Five years ago) were ok but noting more - and clearly the extra age has made a lot of difference and it’s now a lot more integrated with intense black currant/cassis notes and fully resolved tannins. Lots more fairly mature claret in the delivery. 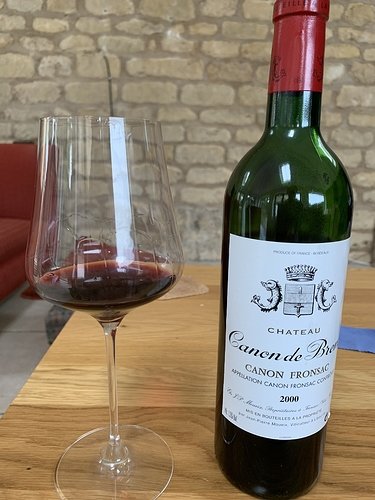 A lovely Bourgogne with all the joys of pinot noir: a perfumed nose redolent of red cherries and an alluring silky and creamy palate with intensity of flavour, rather than weight. Made with 30% whole bunches, this is light yet thrillingly vibrant Burgundy.

Really wanted to try one of the Italian wines that were delivered today but wasn’t in the correct frame of mind after a 2:45 wake-up, to drop Mrs T off at the airport, for one of the first flights out of Manchester. Apparently, she was interviewed on local French TV, upon arrival!

So, went with an old favourite. Initially, despite a decent decant, I thought that I had a duff bottle but after a couple of hours, it had opened up considerably. Quite dense, with prune rather than cherry flavours but quite a long finish. I recall being wowed by previous bottles of this, when it had the slightly under ripe cherry flavours and more straightforward tone that I adore with younger Burgundies. It is now more advanced, more complex and perhaps less overtly pleasurable than previously but this is undoubtedly due to personal taste. There is a lot more going on with this wine now and at £17, this is seriously good value for this level of Burgundy. I suspect that this could keep for several more years and would be interested to see how it develops.

Crumbs, two hour wait for your wine to talk to you. Did you have a bit of a row when you opened it?

Here in Southampton it is grey, wet and miserable. So a warming whisky and ginger to get the weekend going followed by beer (To be decided) and a curry.

Crumbs, two hour wait for your wine to talk to you. Did you have a bit of a row when you opened it?

Yeah, I thought that too. Better this than a corked bottle though. Possibly my taste buds are all over the place, due to the early start and a busy work day. Unfortunately it was my last bottle, so I won’t be able to test this theory out, although perhaps somebody else can…

This is a wine I associate with skiing in France; don’t think I’ve ever had it England before. Also just seen from the link I’ve posted that Roussette is related to Furmint which I didn’t know and seems rather odd as I think of Hungary as pretty flat and low-lying and Roussette growing in the Alps
Anyway it has a fairly bracing but refreshing acidity, full of green apple and pear flavours. Lingering aftertaste. It’s a very nice drink.

Here in Ayrshire it has been grey wet and miserable all day. Almost enough to make me drink whisky even although I don’t usually when there is no R in the month.

Yet another one from the Insatiably Curious Mixed Dozen. Bononia Estate Gamza 2018 a native grape from Bulgaria.

It was the colour of a “red” flavoured boiled sweet, plenty strawberries in balsamic vinegar on the nose had a sort of new world Pinot thing going on. Didn’t deliver much more flavour wise but was delicious for it. I really wish I’d drunk more of this case earlier on in the year before most of the wines in it had sold out! I’ll be keeping an eye out for the 2019 as a summer smasher next year.

Tonight it was this with grilled lamb chops, mange tout, new tatties from allotment, and broccoli from supermarket… 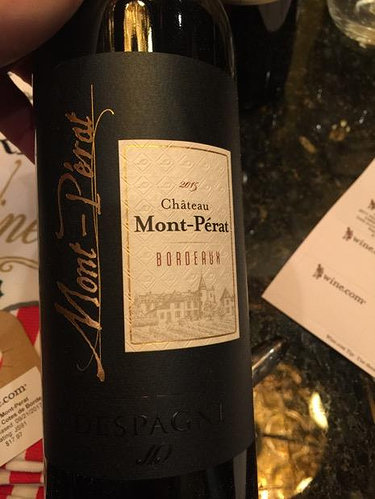 Decanted 2 hours. Softer and more ‘claret like’ than previous bottle last year. Very pleasant if undemanding drink. Still a little jagged round edges, suggesting a few more years life in this. Tannins are there but food friendly. Good match.

Rest of troops (now 4 of them) had these with pasta bake (leeks and bacon).

Light, refreshing, uncomplicated… but so good at what it does that our Wine Champions panel had no hesitation in awarding this sauvignon-like southern French coolant a resounding vote of confidence for the second year on the trot. 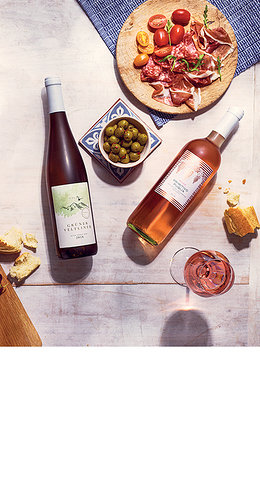 the latter is the Italian Gruner Veltliner on left from Lidl, which is now sold out, but was a very nice drop of wine…

After a rummage around decided on a Rioja with Osso Bucco, Cavolo Nero from a windswept garden and a delightful Rioja . Followed the three amigos and did not decant…worked well. 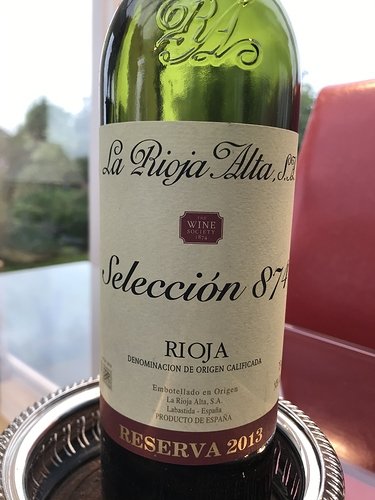 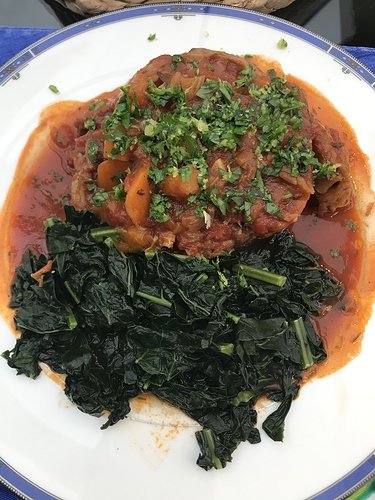 Another long day, so with pan roasted chicken breasts and a fennel / new potatoes / garlic combo we had: 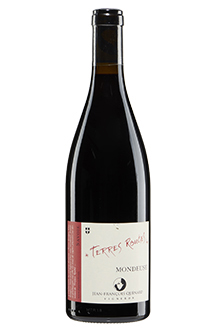 Refreshing, full-flavoured dry red from the French Alps packed with ripe fruit but only a moderate alcoholic strength in an outstanding 2018 vintage that brought greater intensity of colour and flavour. Delicious with charcuterie or hard cheese.

I’ve probably posted about this one before, so apologies for repeating that it’s lovely. An hour open, 20 minutes in the fridge before serving. Better half thinks it gives a surprising “hug” for a 12% wine, and I can’t argue. Very refreshing. Simple pleasures.