Almost 8pm and nothing ! Kicking off with an uncomplicated meal of potatoes, green beans and borloti beans with a nice sea bream fillet.
You can’t ask for more on a wine that cost £8!
Enjoy the summer!

I did my Careme/Clos de la Meslerie tasting this evening. Will write up soon but still processing at the moment. They were some good wines! (and unfortunately a slightly too oxidised one and a not to my taste one).

What a scorching day it was, in SW Herts at 2PM, the external temperature monitor in my car was indicating 37.5 degrees !!!

Foolishly I was already committed to cooking hot food. Unlike me, the chosen wine was chillable … 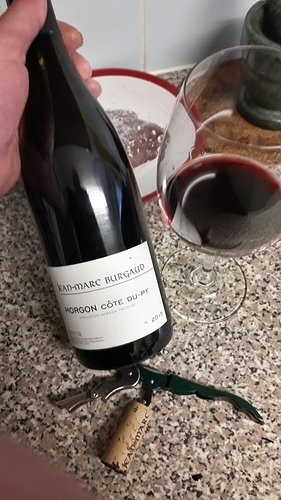 …a Morgon ‘Cote du Py’ 2015 from J-M Burgaud. Ripe and floral black cherry and raspberry nose. Unsurprisingly, plenty of sweetly ripe fruit, from this hot vintage, on tasting too with bags of cherry and berry flavour and a lovely smooth as silk texture. Thankfully its fresh acidity brings a bit of mineral bite to the richness and provides good balance ( more so than the Grands Cras 2015 from the same producer recently broached ). Not as reflective of its terroir as other vintages of this wine I’ve tried but it’s still a very nice drop indeed.

Enjoyed with some rose veal liver and onion gravy, and I have to say, it was a spot-on pairing… 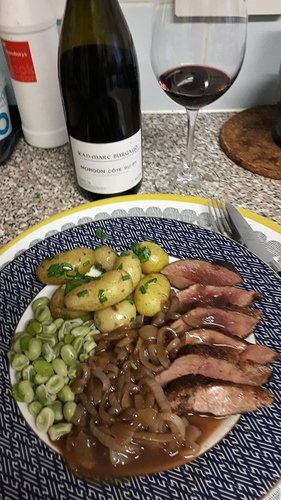 Tonight (and actually half a bottle saved for tomorrow!)

Delighting Society members for more than 20 years, the Cailbourdin family has, as ever, judged the vintage in this part of the Loire perfectly, the wine ripe and almost creamy in texture but poised and balanced.

The perfect pairing? The crispy, slightly charred, skin of the fish, along with the lemon zest brought out both characteristics in the wine - an explosion of buttery citrus and smoke. Perhaps a generous pairing to bring out the best of the wine, but it certainly worked!!!

I also have that wine and we usually have fried sea bass almost every Friday (including tonight). Unfortunately, wine is not chilled so I’ll save the pairing for next week!

Well. That was a lot. Six Vouvray from two Domaines. Showed some real diversity and excitement.

This is a perfect wine for a night like tonight. The mercury is still hovering in the high 20s and this was fresh, zingy and appley, but with loads of honeysuckle and ripe melon as well. It’d work a treat with bbq’d fish.

OK. This was a lot. So big and round and fruity and herbal and honey’d. Amazing mouthfeel and great reflection of everything that chenin blanc can be. There were tropical fruits and honey and toffee and even a slight coffee-ish note to it. This was my favourite of the evening, despite it needing food and not being the smashable wine the weather needs.

A little sad. This was a little too oxidised for me. I have a feeling that was a function of the putting it in a little bottle and sending it over, rather than the wine from bottles fault, but it was definitely too oxidised (and this from the man who drank a 1979 Chablis a few weeks ago). Shame as there was clearly a lot going on underneath that. It was a lot more lean and herbal that the 2018, despite the extra age.

Peter Hahn only makes one wine style a year, he just picks the grapes when he thinks it’s a good idea and sees how much residual sugar he gets left with. 2017 was a year where he made a dry wine. It felt like I was a sweet wine without residual sugar. There was so much honey and honeysuckle and caramel and toffee and white blossom, both on the nose and the pallet. Plenty of acid to back it up and enough residual sugar that while it was still clearly a dry wine, the sweet notes didn’t feel out of place. Delicious.

Didn’t quite do it for me in the way the Sec did. Similar aromas, with possibly more tropical flowers, acacia rather than honeysuckle, and obvious some extra sweetness and viscosity in the mouth. Somehow for me it just didn’t marry up as well as the Sec did.

Another year, another style. Cooked marzipan, honey and honeysuckle on the nose, which followed through on the pallet, but with lots of stone and tropical fruit notes as well. Even a little minerality which along with the acid cut through the sweetness really well. Another very classy wine. Would have benefitted from either Thai food or a fruity desert, but was delicious none the less.

BBQ here, a meat feast of burger and lamb kofte from local butcher, both delicious. A young Bordeaux as a last minute choice which worked quite well.

It was tangy and tasty, tannins a little sharp but quelled by the food. Blackberries and vanilla. The other half tomorrow so will see how 24 hours rest does to it.

Was planning on making a mulled wine plum chutney (under way), so bought a bottle of Merlot in a local supermarket for £2. I thought Merlot snd plum would go together. It is actually made by the maker of the Móri Ezerjó that the Society sometimes stocks. Not a massive Merlot aficionado and let’s be honest, £2 is super cheap even in Hungary, yet… when chilled to around 16-17 degrees as suggested on the label, this is a decent wine. Not jammy confected plonk, sweet red plum fruited wine that drinks very easy. Cheers. 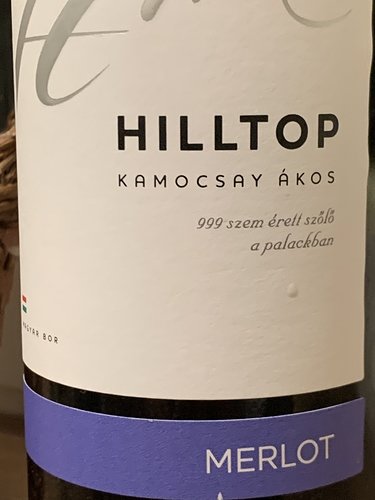 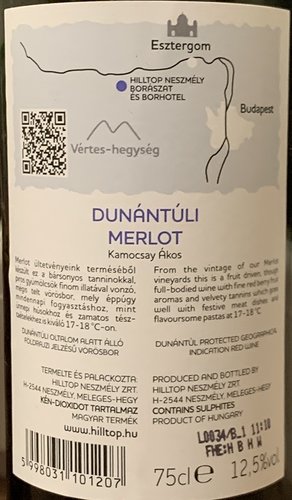 Spent the day with in-laws up in Bath … the other half volunteered to drive back, so I had an afternoon drinking all kinds of everything, all of which had the desired effect

My contribution was this decadent delight:

Grand cru Champagne from the village of Bouzy made by a family with 200 years' experience cultivating the chalk of the Montagne de Reims. A pinot-chardonnay blend that is full-flavoured, distinguished and a pleasure to drink. The ‘12' refers to the base vintage.

Making the most of seeing people while we can (let’s hope it lasts but who knows?). We had friends round for a socially distanced dinner, who are fellow Alsace lovers. So we shared the bounty from our recent trip.

As an aperitif, Dirler-Cadé Brut Nature Crémant 2014. This actually came from a previous visit. 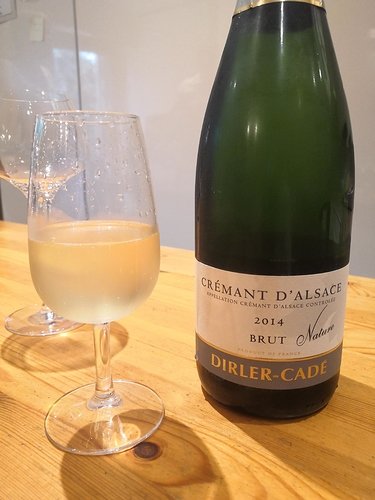 Pinot based, but blanc and gris, rather than noir. They stop the first fermentation early, and then add no sugar at tirage, relying on the remaining sugar in the wine to create the mousse. Fruity and fresh, mid-sized bubbles, and an excellent pre-dinner drink.

Then brined cod with clams, spinach and a lemon butter sauce. To drink, Kientzler Muhlforst riesling, 2018. 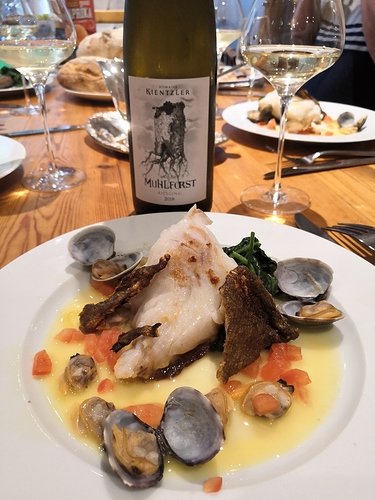 Young vines and young wine. A really nice, clean, citrussy yet mineral riesling. It certainly has ageing potential, but on drinking it tonight with food, it was so good that I really don’t think that I need too. There’s just a touch (5g/l) of sugar to fill out the palate, but the acidity keeps it very clean. 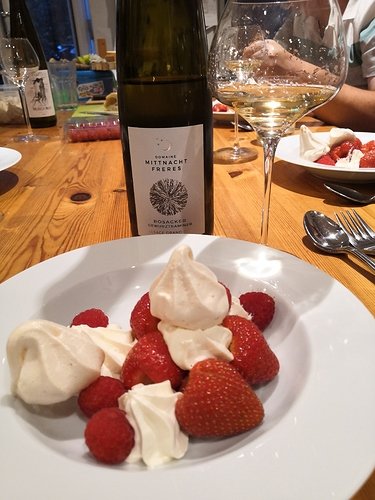 OK, so this really is too young. But when it’s this good already, who cares? Tropical fruit in abundance, and a properly peppery finish. Yummy.

Happy Weekend all, whatever the weather where you are!

Muscadet de Sevre-et-Maine Sur Lie Le L d’Or 2002, Luneau-Papin I’m sure many people here know a decent Muscadet from.a good vintage can happily age 20 years or more, but even then it’s a surprise just how fresh this is, without even a hint of age. To the point when one does wonder what the point is

It’s been very busy at work at moment - was looking forward to a bbq all week, then at 6pm it started to rain😩. Typical bloody Cheshire! I’m not sure who cried more - me or my 6 yr old son. 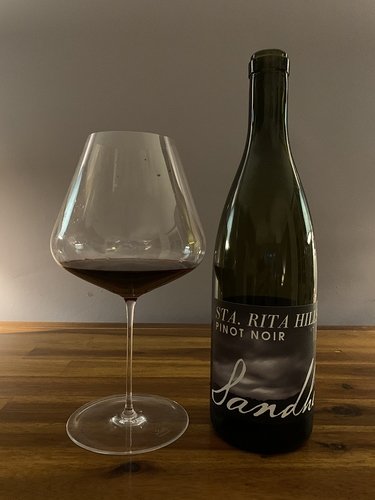 It was beautiful on the nose - blueberries, lavender and a hint of cherries. Yet unfortunately on the palate it was more restrained. Smooth and not thin at all. I’ll give my remaining few bottles a few more years.

Muscadet de Sevre-et-Maine Le L d’Or 2002, Luneau-Papin I’m sure many people here know va decent Muscadet from.a good vintage can happily age 20 years or more, but even then it’s a surprise just how fresh this is, without even a hint of sge. To the point when one does wonder what the point is

Give it another 20 years

This is probably my favourite champagne producer from TWS. The rose is a delight too!

This was fantastic - wild strawberries, medium bodied, great with fish

Organically grown in a stunning vineyard overlooking the sea, this is a full-flavoured dry rosé of great charm and red berry focus.This organically produced gem would be particularly delicious with the local Calabrian sardella, a dish made with sardines and fennel. 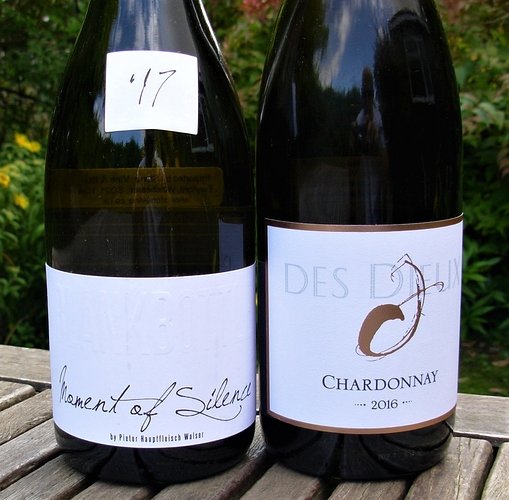 The Domaine des Dieux Chardonnay (2016) is a dead ringer for the more famous (and more expensive) Ataraxia. Perhaps not so surprising, as it’s next door, and is made by Ataraxia in their cellars. The name is a pun on the fact it is grown on the Hermel-en-Aarde (Heaven on Earth) Ridge.

The 2017 Blankbottle “Moment of Silence” is (for Pieter Walser) a relatively mainstream Chenin Blanc based blend, with Grenache Blanc and Viognier in there.

Not sure yet what we are having on Sunday, but will try to extend the theme.

The Society sent me the wrong Beaujolais., but let me keep it, even though it’s more pricey than the ones that I ordered.

Looking forward to trying it. 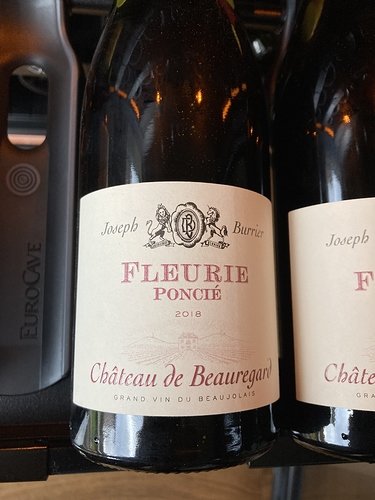 From old vines planted high up in Fleurie, on the typical pink granite soils, this is a fine, perfumed wine with the hallmark freshness and softness. Classic Fleurie in other words.

Tonight, I’m having some friends over for a socially distanced dinner party.

Here’s what I have planned:

Fillet of Venison with a Red Wine and Shallot Reduction

I will report back in due course

… Probably Monday, given the volume…

Great-sounding menu! If the 2017 exhibition crozes-hermitage drinks anything like the 2015, I’d get it in a decanter pretty early because there’ll be a lot of ‘farmyard’ to blow off before the yummy fruit reveals itself. Good stuff though, look forward to hearing about it.

Do you take orders?