Final night in Arcachon before home time tomorrow. Delightful two weeks in France with the folks and Mrs M, particularly given all the cancelled trips of the past two years. Took a punt on these two from the supermarket for this evening. Happy weekend everyone!

Brought along a bottle of this to enjoy whilst getting ready for the evening ahead
https://www.thewinesociety.com/product/champagne-pierre-paillard-bouzy-grand-cru-la-grande-recolte-2006

Next stop the hotel roof terrace for cocktails….

Happy weekend to all! 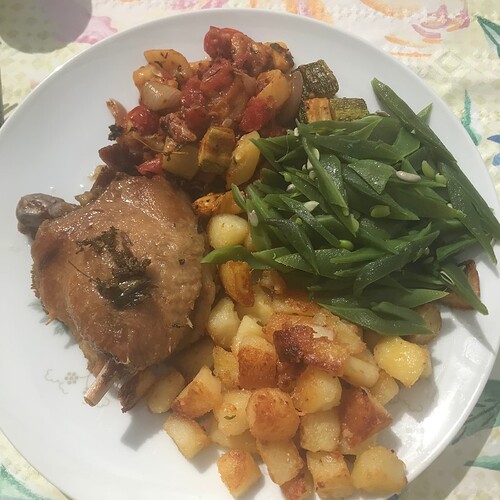 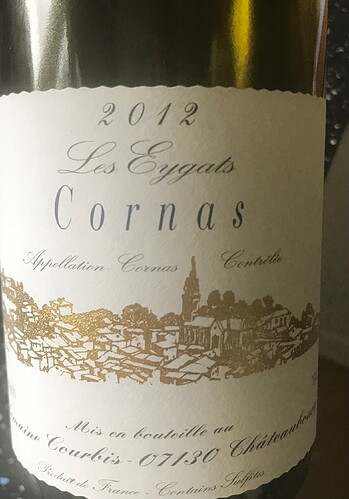 @NickM - been reading in the papers of terrible wildfires in Bordeaux region and Arcachon in particular. What’s it like there?

@woodap what a great way to celebrate, congrats!

Wild boar meatballs and pasta for dinner this evening, and a bottle of this Lidl Barolo to accompany: 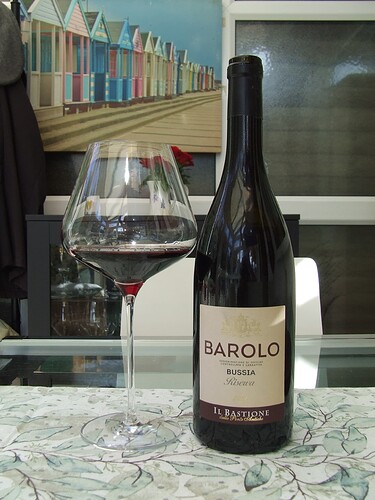 We don’t drink much Nebbiolo, let alone Barolo. This is probably the understatement of the year. So please be gentle with me – as I haven’t really got a huge library of experience and comparisons to work with. Having said that, first glass was met with happy and approving nods from both myself and the other half

As a quick summary I would say that the nose is a tad more interesting and multi-faceted than the palate; then again, I can’t quite fault the palate, bar perhaps the finish – which could be longer. In the glass it is as expected – a pale garnet, with a touch of browning on the edges and a certain viscosity (this is 14% ABV).

On the palate there are similar notes of dried red cranberries and cherries, with a smokiness that I personally really like, that star anise again and some crushed gravel dustiness. Acidity and tannins are both still alive and kicking – tannins being somewhat astringent, but not unpleasantly so, with a leathery texture. Finish is all about coffee. I wish it lasted longer – but for a £19.99 nine year Barolo I ain’t complaining!

Last night Mrs N set to, cooking a favourite: Monkfish with mussels in a tarragon/saffron sauce. Apparently it requires a lot of profane language to remove the membrane from the monkfish and uses every pan we have in our kitchen ! 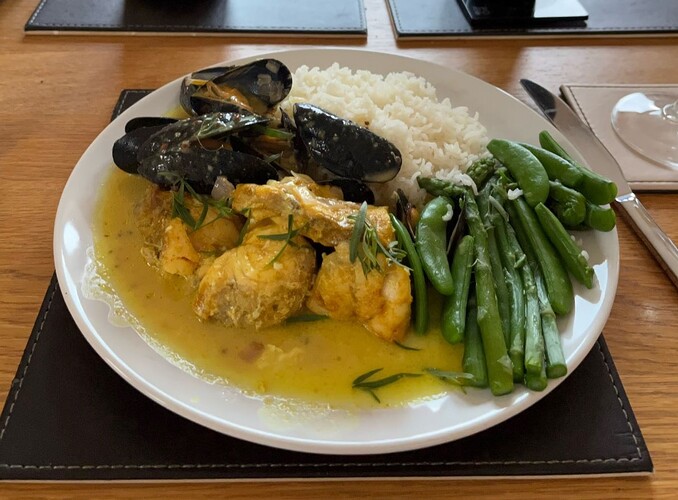 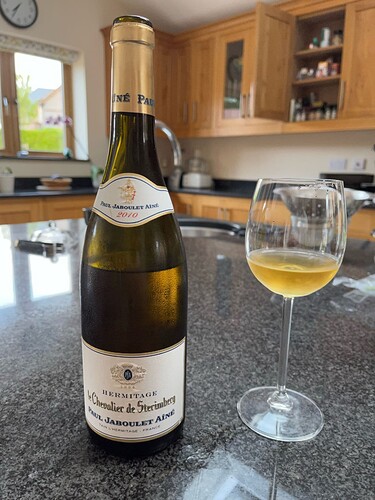 … however turns out not to have been the best match.

It is over a year since I last opened one of these and the wine has progressed. At opening it was clear that I had it too cool but at current room temperatures that did not take long to resolve. As it warmed the breadth of palate started to develop but never reached the generous fullness of younger bottles. It still retained the acidity but now with a touch of oxidation that did not suit the sauce.

This did not stop us happily quaffing the lot after the meal.

It will still be a splendid bottle to go with something with stronger flavours such as chicken with lardons and olives where the fattiness and richness will stand up. The end date may not make the 2024 TWS indicated when purchased en primeur … so only three more to drink in the next year !

By the way this wine has the longest corks at 55mm … unless you have seen longer?

@Inbar i had that Barolo a few months back and I thought it was fine specially for the price. Having said that the Bussia that TWS had in stock until a couple of months ago was quite superior for £8 more

Ah! Well, I’d be happy to pay £8 more for a superior example! Who was it made by?

The red was bought at the vineyard a few years ago and possibly a little past it’s drinking window.

Definitely won’t be past it, unless it’s duff or stored wrong. If anything, for a Roq sur Mer red - which I too rate - it will be just getting into its stride. Best La Clape red though is D’Anglès Grand Vin at a give-away €22. But that’s personal prejudice, of course !!

Yep that Cremant, from Monoprix I suspect, is very very decent

Silvano Bolmida. They also make the usually excellent Exhibition Barolo (but strong suggestion to steer clear of the 2018!).

You have to factor-in the French long lunch hour (12-2 usually) on these winery crawls, the window in the morning is only about 2 hours but once the afternoon shift starts they will stay open until 7pm usually. So I split the day into two, first mopping up a missed visit in Pupillin (Domaine Desiré Petit) who major on Cremant and Poulsard, and then Badoz in Poligny, who also make a range of Jura cheese - (Comté, Bleu de Gex, Morbier, and in the late summer, Vacherin de Mont d’Or)

A snack lunch was followed by parking up at the Belvedere du Cirque de Ladoye with the intention of a Bike circuit over to Chateau Chalon then down to Voiteur and Nevy-Sur-Seille, then the laborious climb back up to the to the viewpoint.

The day hadn’t started well as I tried to cadge a visit with Laurent Macle, the legendary Vin Jaune producer - but he disagreeably retorted on the phone - “No chance I’m not around this afternoon” (sanitised version), and no reply despite messages left from Francois Mossu the equally legendary Vin de Paille producer.

But we were still left with Hélène Berthet - Bondet (open on Saturdays), Dom Rizzi, Dom Credoz in the town, and the Voiteur Fruitière at the foot of the hill, and Dom Marie Louise Tissot.

Berthet-Bondet. Here was the best VJ we sampled over the past week. Sorry about the cellar visit photo out of focus and aiming at ToH’s head rather than Hélène conducting the tour of the VJ cellar. The cuvée La Poirière Chardonnay was extraordinary, a nose of baked custard tart with cream… 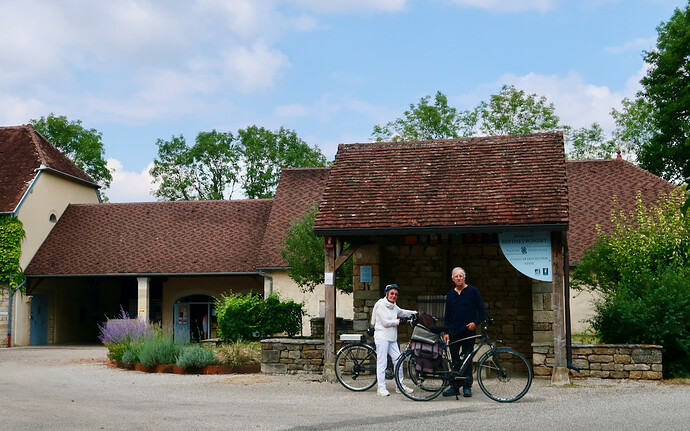 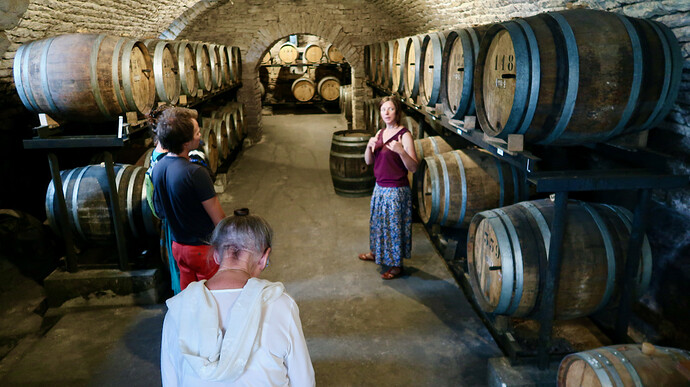 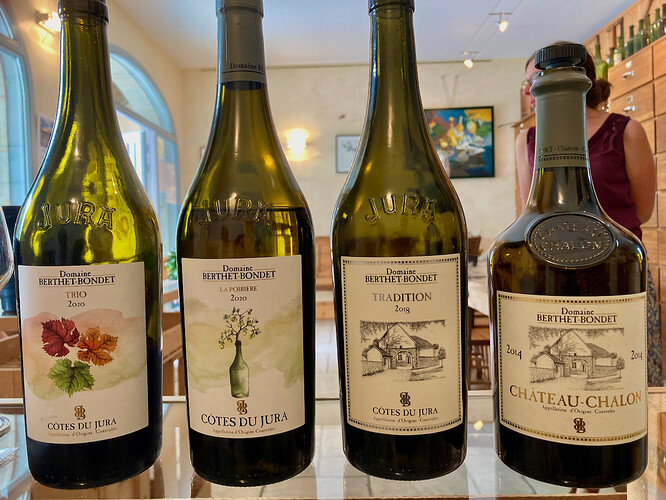 Nothing too exciting at Credoz or Rizzi, but worth mentioning the former’s cuvée Melon à Queue Rouge which they insisted was a rare and distinct cépage (according to boffins in Montpellier) , whereas JRWG states unambiguously that it’s just another name for Chardonnay. The latter does bear scrutiny as the Fruitière also does a Melon but says it’s “only” Chardonnay… 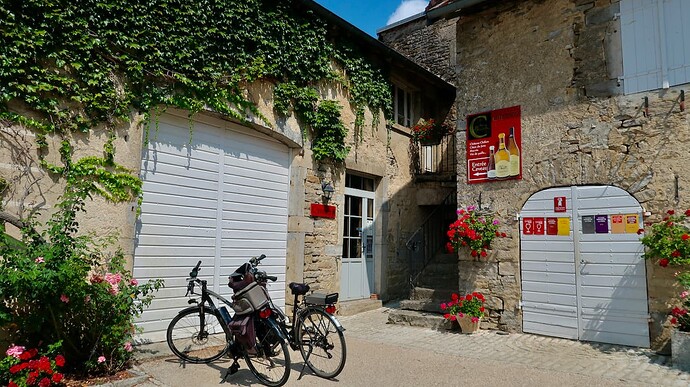 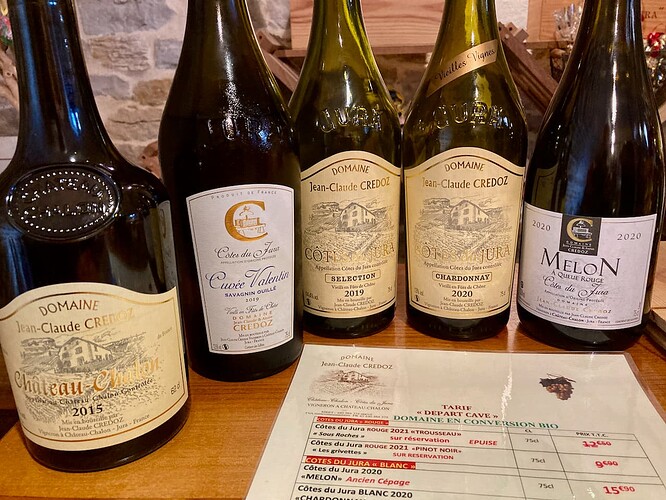 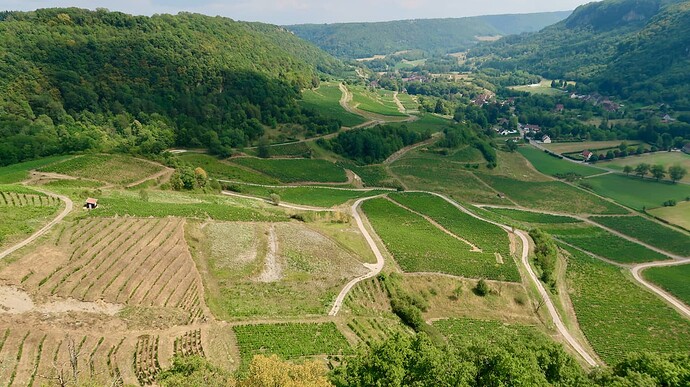 This Tissot (and there are at least 6 different Tissot domains in the Jura appellations ) has a small hectarage - about 7 - and offers a full range of Jura wines, and also is the go-to distillery for many other vignerons in the region for their Marc, to make into Macvin. But they also make a range of Malt Whisky (from cereals in the Poitou- Charentes) matured in a range of old Jura Barrels. It was OK (but I’m no officionado) and the winner was the one they matured in old Vin Jaune barriques. €65 a pop is fairly pricey in my book, though. 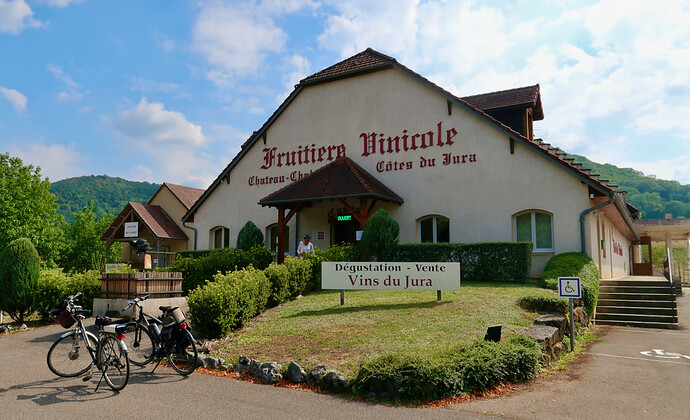 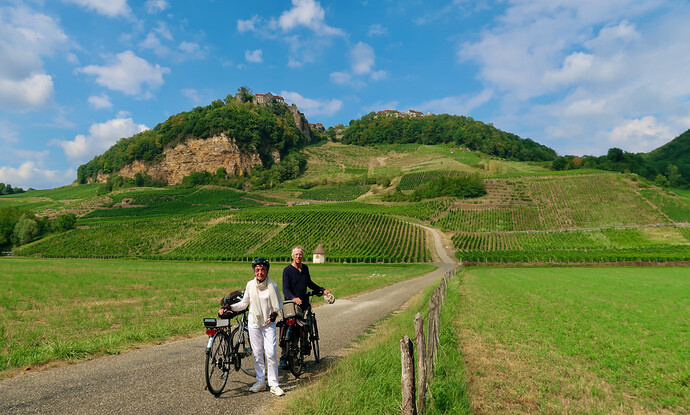 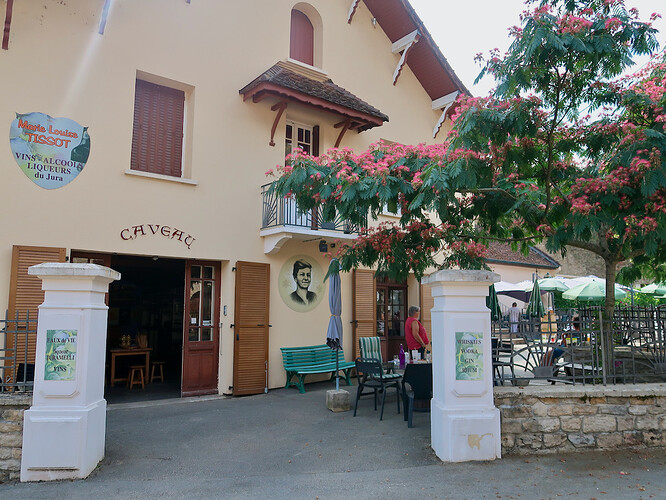 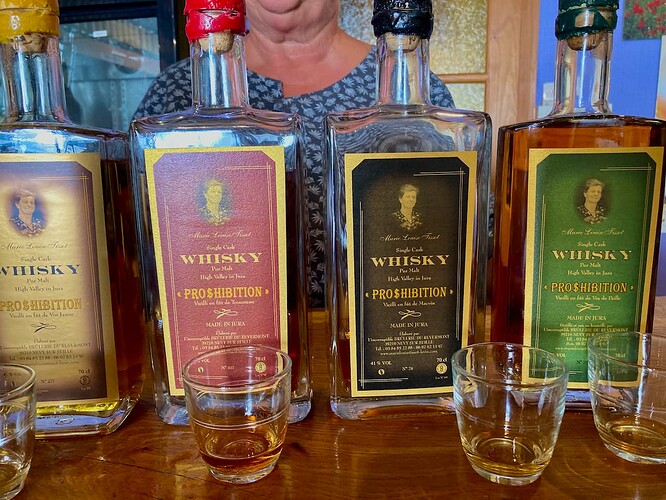 But in an OK why not moment we were offered some of their reds - and wow their 2018 Poulsard was really good - we bought some ! It did dawn on me that the 2018’s were generally very nice but most Cavistes were offering 2020’s which were rather feeble and herbaceous.

Any supper will be some fillets of merlan, local spuds and salads with these 2 Badoz wines. The Poulsard isn’t too bad for a 2020, and nicer than their more pricey Biodynamic offering. 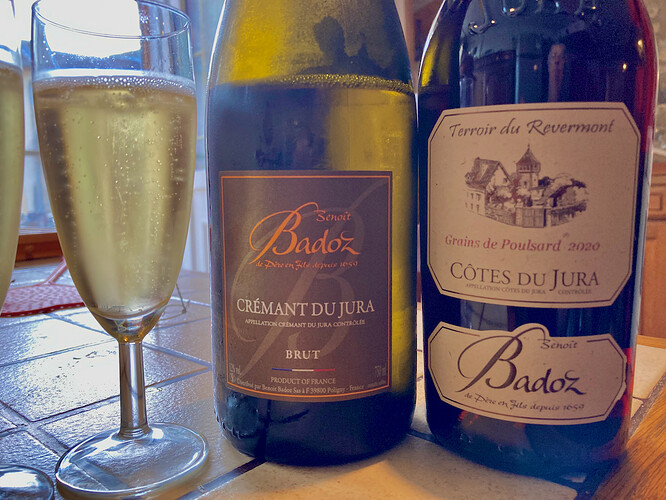 Hi Peter - yes the fires were pretty severe earlier this week and came within a couple of km of Arcachon itself. Last Tuesday evening the sky over the town was, rather alarmingly, entirely obscured with black smoke, although I don’t think we were ever in any real danger.
The fires have been put out now. The effect on local ecology has obviously been pretty devastating but, short of another heatwave, I’d hope you’d be fine for your trip in a few weeks.

You’re not wrong @PHarvey - love a french supermarket and have developed a real fondness for Monoprix this week (my bank manager not so much).
The cremant is delicious - super creamy, oyster/caramalised apple, costing all of €8!

Couple of nights in Büsum on NW German coast. A glass of 2019 Franz Keller vom loss spatsburgunder to accompany a decent rump steak which was served much to my delight with käsespätzle (would never have considered eating this in summer but my German is poor enough not to have known it was coming). The spatsburgunder was so good I have another on the go as a nightcap. Astounded to see it sells for around 12euro retail. Not sure how long it would keep for but will probably take a few home.

For a “reasonably” priced next step in Nebbiolo https://www.thewinesociety.com/product/barbaresco-rizzi-2019 is a lot of wine for the money.

the usually excellent Exhibition Barolo (but strong suggestion to steer clear of the 2018!).

I’ve been wondering about that. Do you think maybe it was the victim of insufficient air and served too warm? Hot and soupy Barolo is nobody’s favourite.