Today I start my 12 weeks off work to recover and relax. Kicking off with a BBQ and this.
Happy weekend!!! 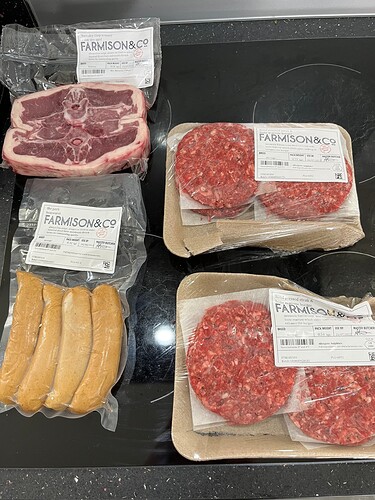 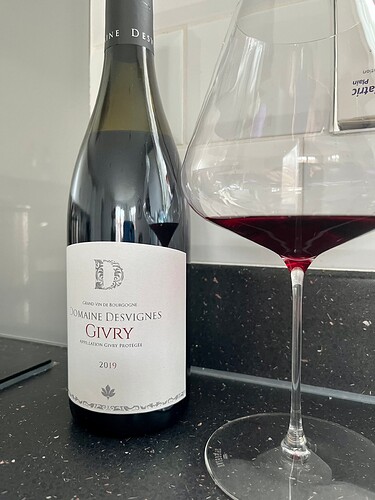 Oohh this looks delicious @Rafa ! I’ve popped to the butchers in town at lunch time and grabbed a couple of bits for tonight’s BBQ too, can’t wait. I’ll be opening a new bottle of The Society’s Exhibition Alvarinho Vinho Verde 2021, look forward to trying it

Nice one and all the best @Rafa !

To kick the weekend off here, a couple of glasses of this with some deep fried, so a rare treat, breaded squid and salad… 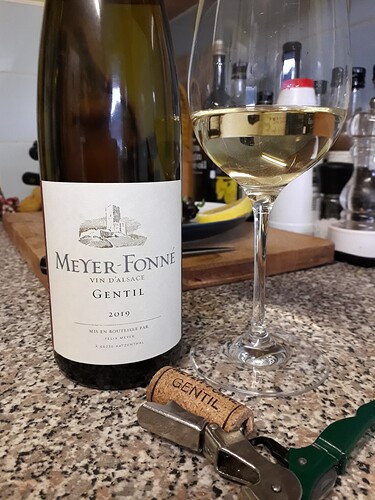 Tree blossom, citrus, orchard fruits, mint and a subtle hint of musk on the aromatic nose. Clean and flavourful medium weight fruit on tasting with some apricot and spice in addition to the previous notes. Lovely freshness and balance are making it very easy to drink so it’s time to get back in the kitchen to assemble plate two tonight ( cold marinated chicken leftover from yesterday, spiced cousous and salad ). Does the job an entry level wine should in that it makes you want to explore others further up their hierarchy too.

Have a great weekend everyone.

It’s about 80 minutes from Miéry in the Jura over to Dijon; the motive was to visit their new Cité de Gastronomie and du Vin https://www.citedelagastronomie-dijon.fr . They tried one in Lyon a while back which failed and it closed in 2020 (though due a re-vamp and re-open next year). In Dijon, it opened in May and is located not far from the old city centre - a 10 mins cycle ride on mainly cycle paths. In fact we parked up in the suburb of Longvic as there’s a very good 6km cycle-tow path along the Burgundy canal, which links the Saône with the Yonne 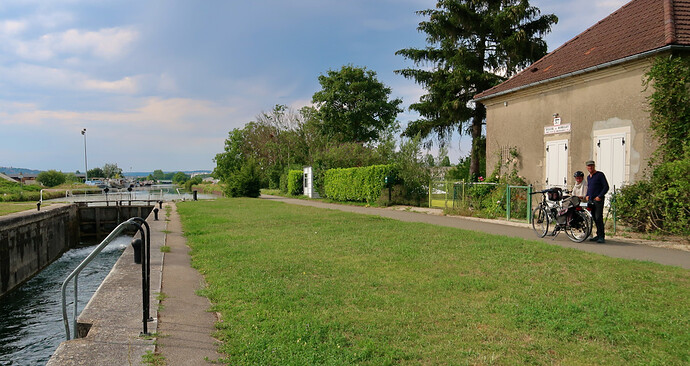 But first a pick-us-up at the bar in Les Halles in the old city, wines by the glass included this Montagny for €8 - which wasn’t the mouth explosion I’d hoped for. Just a nice chilled chardonnay, but overpriced imo. 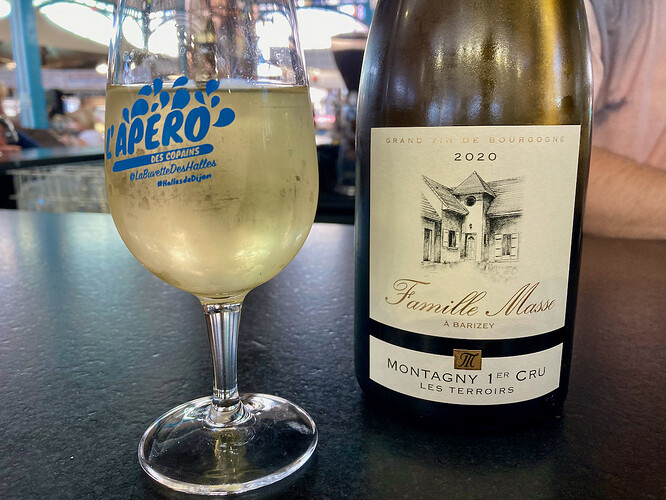 The Cité itself is a complex of exhibitions, tourist info, a wine school, a cookery workshop, bars and restaurants and a “village” of food outlets - with dining. There’s also a large Cave aux Vins with enomatics galore; a vast selection of Burgundy by the 30ml glass at around the €2-4 mark, and a Grand Crus cellar with its own enomatics 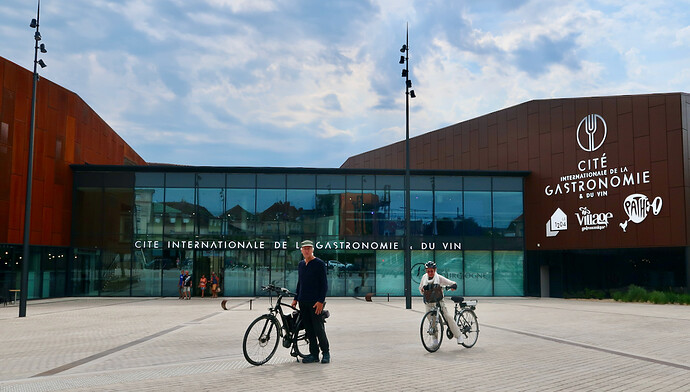 We chose to have a (lovely) lunch at the poissonerie - by chance we actually knew the head guy who used to run the fish stall at the market in our home town in the Pyrenées ! He recognised us and we shared It’s a Small World sentiments and caught up. We chose the Plancha for €20 which we shared. The idea is to choose a certain weight of fresh fish on display and they would then proceed to cook it. It was very well done, and the glass of Bourgogne was better than the Montagny from the Halles.

The exhibitions are mainly about La Cuisine Francaise and Gastronomie and well done, with lots of interaction and all in both English and French; a lot is pretty basic though. Not much about wine, usual themes of wine and food pairing, aromas, guess the wine from the colour. So nothing as comprehensive as the one in Bordeaux. We enjoyed the one dedicated to Patisserie best. But… it was pretty quiet despite Dijon centre ville being packed. I hope they generate more clientele than this. Apparently weekends are much busier

The Cave and the enomatics ? well we quickly blew €50 on a shared tasting of 4 x 30ml G-Cs - The wines were nice enough, none mind-blowing, I picked the Clos de Vougeot, Pommard, Chapelle-Chambertin and the Echezaux - which was the winner. €50 would not have bought me the smallest sample of the Musigny !! 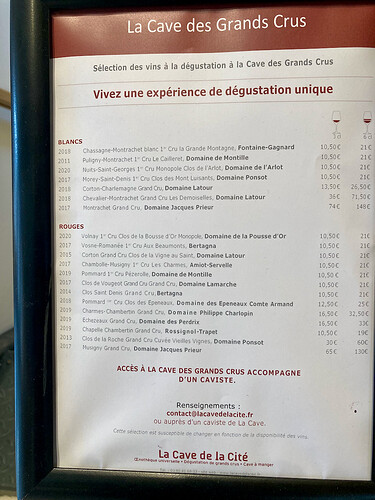 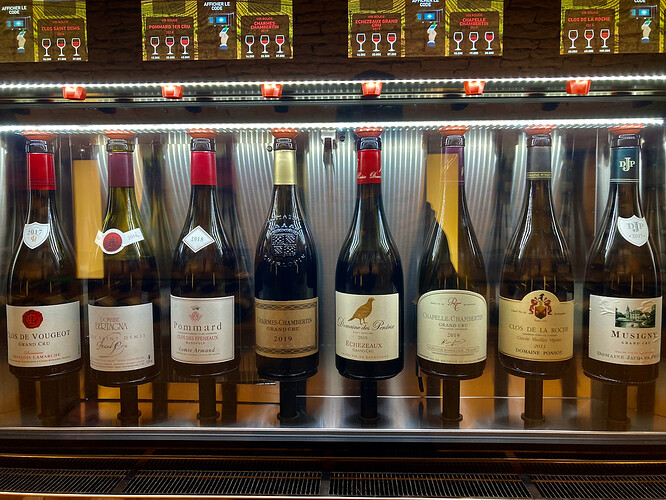 Seem to be on an Australian streak lately and so it continues tonight. 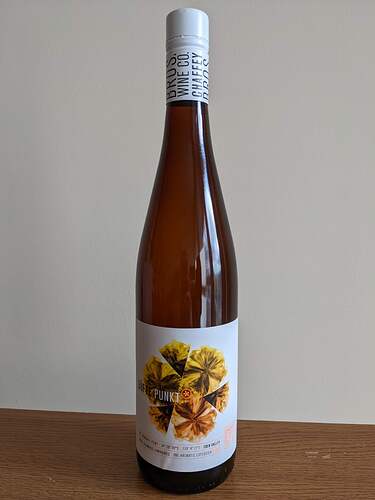 After last weeks Riesling blend disaster I opened this with very low expectations. Well all is right with the world again, Riesling can be blended (in my very amatuer opinion).

For me, the Riesling dominates but the gewürztraminer and kerner bring body and a creamy yeasty characteristic to the typical petrol, lime Riesling notes. I also like the subtleness, nothing overdone yet delivers in spades. School report has a big

One of those “bargain” purchases from Majestic that you come to regret - 2009 vintage champagne from Nicolas Feuillatte. Hopefully the last of 3 or 4 I bought a few years back at about £20 per bottle.

Not unpleasant as such, but likewise not particularly interesting. Strong scent of apple on opening and rather sharp / acidic. Pretty much the same as the earlier bottles - will turn the rest of this one into kir royale (or use as component of a cocktail). 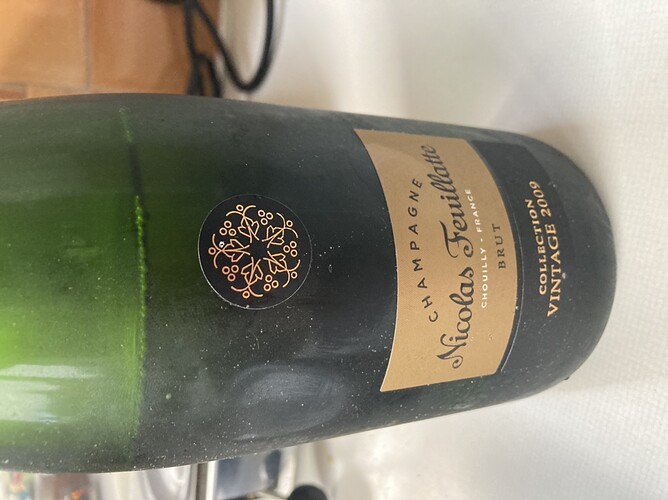 @gabehiggins i had it yesterday and found very pleasing and good value. 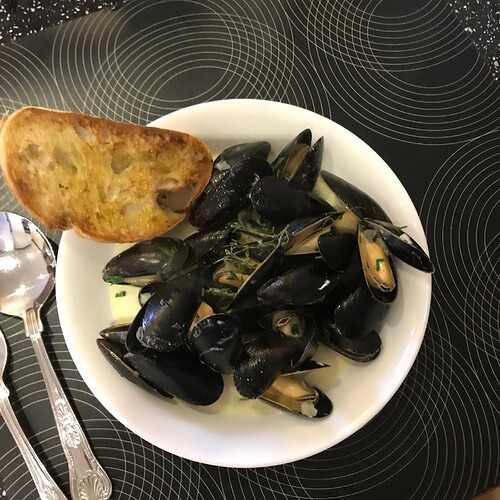 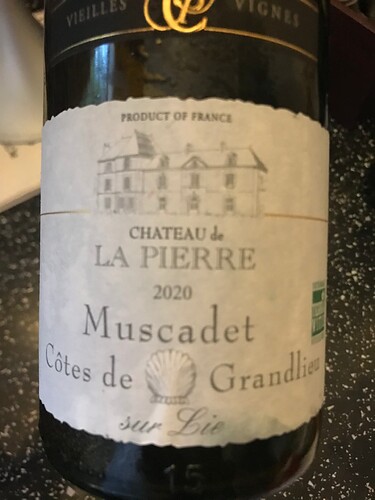 @adbdorset its lovely
Almost as dark as a northern Rhone. Dark cherries dominate the scene. No green or sharp edges, nice fruit and really silky tannins. The fruit is sweet and indulgent. Similar in profile to the Caroline Bellavoine.

My girl is about to start her travels in Europe on Monday, and my Jewish Mother side has gone into overdrive…!

We went to town to buy her a rucksack and other bits and bobs, and all I could think was “Yes, there are shops in Europe… but how good can they be?!” (which is a sort of paraphrase of Sylvia from How to be a Jewish Mother- I am not original in this department!).

Anyway, wine was supposed to be a sort of smelling salts equivalent for this mother – alas! The wine of choice was oxidised… 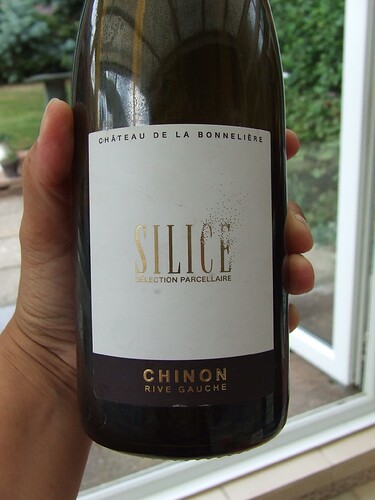 This was a 2018 white Chinon we bought after a cellar door tasting, back in the unhallowed summer of 2020. I loved it at the tasting – it showed promise and substance, so to have waited a couple years only to find an oxidised bottle was, well, disappointing

Onwards and upwards, though - we opened a bottle of this delightful Pinot Gris instead: 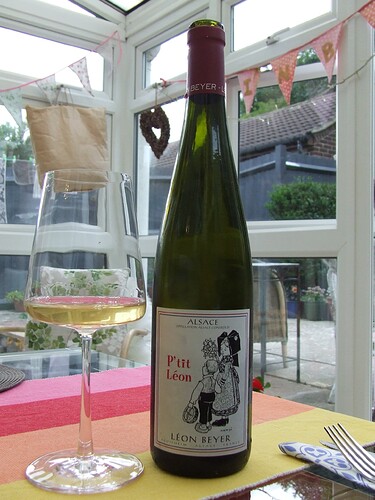 Med gold in the glass, the nose has notes of pears, apricots, ground ginger and jasmine. Similar notes follow on the palate – ripe pears, peaches and fresh apricots with a touch of cinnamon and stem ginger and a smokiness in the background. The finish is quite long and ends on an orange citrus zest.

A harmonious and delicious examples of Pinot Gris, which went beautifully with our honey and mustard marinated pork chops. Excellent value for money and well done to Jo for sourcing it!

Initially those prices are shocking, £8.50 and upwards for a tiny measure of a Grand Cru wine, 3cl is six teaspoons.

But thinking on, how else can one experience such wines? maybe not such a bad idea after all. Especially as @PHarvey says none were mind blowing. I guess (gasp) it’s only wine. 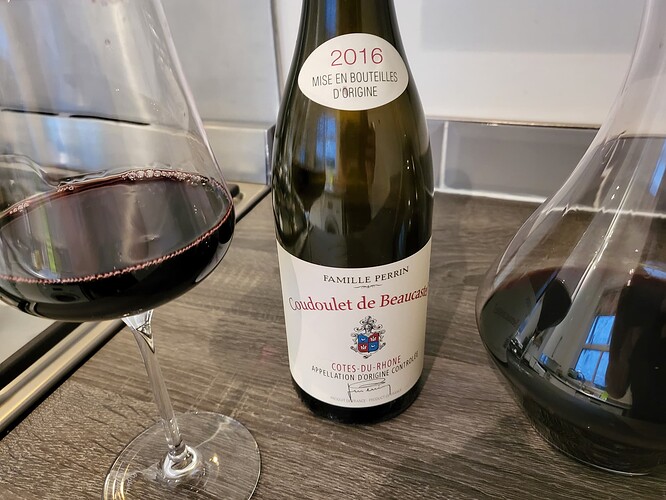 Bought this in the 2016 Rhone EP, this is my first bottle of six.

Definitely drinking well now, gave it half an hour in the decanter but frankly it needed a couple of hours. Really settling into it now

Snap (ish)! Tonight we have 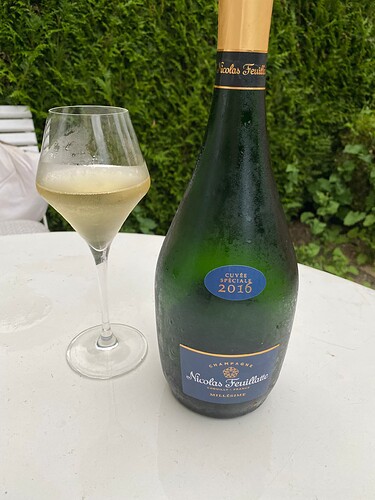 We’ve had some champagne of sorts on the go all week (we’re just about in the region).

With all champagne I find you have to be in the mood for the acidity and bubbles. I don’t tend to drink a lot of champagne but a glass or two has gone down really well this week. We usually switch to a glass of red following which means we don’t persist with the acidity. On our bottle, we are judging there to be some other pleasant brioche notes and the high acidity is balanced with the fruit. Although agreed on lack of complexity

We are paying about the same now 26 eur. For this I think it’s good value for money. Particularly when contrasted with paying 8 eur for a glass of coke at a restaurant at lunch in Paris

Sea bream this evening, with a crab and potato cake, Little Gem, and a grape, caper and verjus sauce. The wine was Mittnacht Frères Muscat Mise de Printemps, 2017. 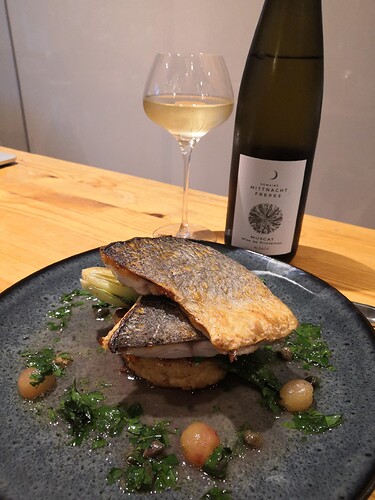 More herbal than floral on the nose, with mint notes dominant, though some jasmine and honeysuckle getting through too; dry on the palate, with some ripe pear to complement the expected grapes; and then a long and minty finish. A little saline, too, and picked out the grapes and salty capers in the sauce. The verjus was made by Mittnacht, too, so the wine seemed appropriate!

Hope everyone has a good weekend - just me and our son here, as Mrs Robertd has flown to Hong Kong to see her mum for the first time since 2019.

Many, many years ago my then partner and I undertook a day long walk along the Nahe river from Bad Kreuznach to Schlossbockelheim and back. IIRC I did actually explain my motives for doing so BTW. The highlight of that walk was passing by the 200m high Rotenfels cliff face and the tiny sun trap vineyard, the Bastei, at its foot. Some 35 years on I still hadn’t actually tried a wine from it but finally, thanks to TWS, one arrived earlier today. Needless to say, I just couldn’t wait to try it… 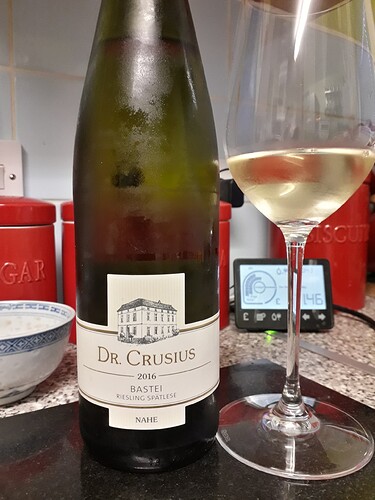 …TWS notes are accurate and by means exaggerated. OMG, an exquisitely perfumed and complex nose with layer upon layer of mineral laden riesling flavour on tasting. The residual sweetness is beautifully cut and balanced by its considerable acidity and there’s a long, tangy, sweet but fresh, finish to end.

Thoroughly deserving of its Wine Champions award which for an unknown reason didn’t make it onto the printed list that plopped through the door earlier today. The further two bottles here will not suffice so a case will be now be sent to reserves ( a six pack would have been my preference though ). Obviously, socks well and truly knocked off by this ! 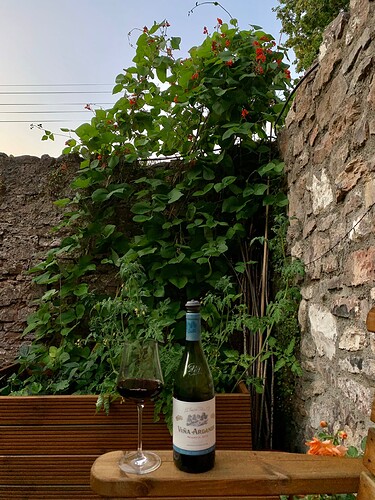 Rioja Alta Vina Ardanza 2012 tonight to celebrate the end of my first week in a new job. The perfect accompaniment to a plate of BBQ food. Bought on the strength of recommendations from friends and this forum and I’m very glad I bought a case!

Interesting to read this, @Embee; I’ve been eyeing it up myself, and your description makes it even more temptating. I’m trying to avoid any more vinous spending after splurging on the Senorans and the Semillon this week, but proving rather challenging with this and the 2015 Prum both available!

It is now possible to buy by the 6 and have them sent to reserves, I think [?]. Certainly been that way for a few months now via my account FWIW. I just did a trial run for this one, and works fine too. Control maintained however, and back-buttons hit hard. 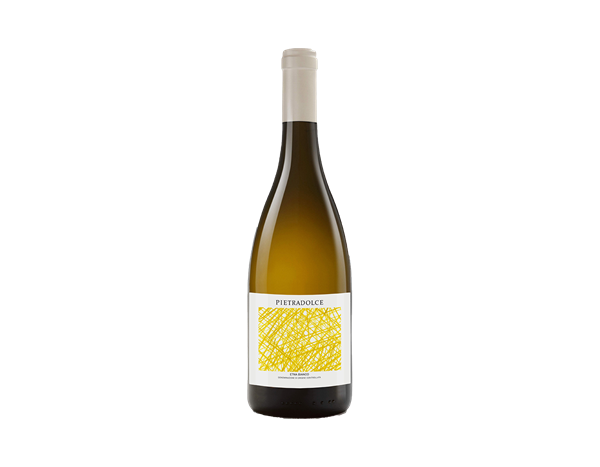 I had a long drive to Cheltenham and back today for my dear old friend Ben’s funeral. Quite a solemn Catholic send-off, but happy memories shared etc afterwards with his family and other friends there.

We used to enjoy these - the Pietradolce Etna Biancos - together sometimes on occasions when our paths crossed on work in Napoli & thereabouts, so seemed an obvious wine to open when I got home tonight.

An old familiar to many on here, and as flinty-minerally-tasty as always. Much though I love the Etna Carricantes, I’ve noticed I tend to find myself veering more often for the Catarrattos over the past few years. They can be limp & insipid / sunny & round, but when they’re good they’re really really good!