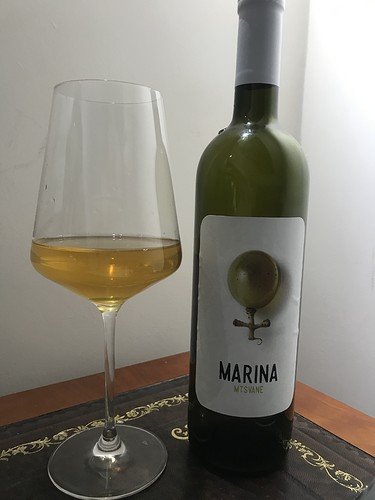 image3024×4032 1.79 MB
A wonderful Mtsvane from Georgia over the weekend.
Made by a very passionate winemaker in the south west of the country .
Poached pear, peach, jasmine, passion fruit and lime rind with a really great phenolic bite to the finish thanks to the skin contact .
It is made in traditional Qveri’s which are buried in the ground and is spontaneously fermented , no fining or filtration .
Such a good example of an Orange wine.
25 Likes
Brocklehurstj February 22, 2021, 9:11am #129

Half term signified the lifting of the weekday drinking ban (and it wasn’t me who proposed this) so have polished off a few bottles this week. It was a good week. From TWS

Lovely Spanish red from a notable estate set in a prime location in Spain's famous Ribera del Duero region. The magnificent 2010 is densely flavoured, stylish and structured, and, unusually, aged for over 10 years by the property before release. This slow, gentle maturation results in a wine of...


Really enjoyed this last weekend. A big wine still in the first flush of youth. Definitely needs decanting . However, after a couple of glasses disappeared up the road in the mystery wine bottle, I couldn’t resist finishing the bottle so was unable to track its development. Now cursing the fact that I split a single box with a friend and am considering buying a few more at full price.

Sorry we do not have any notes for this product.


I was expecting an orange wine, but it was actually bright yellow from skin contact. Nice, grapefruity, plenty of texture, but for me, I enjoyed a glass but wouldn’t choose to drink more than one in an evening (so we finished over a few days).

Really enjoyed this wine this weekend

Christophe Pichon is a celebrated Condrieu producer who also makes delightful Rhône reds that are soft and supple and a delight to drink young. There is great delicacy in 2016.


Opened with steak. In contract to the other two reds opened this week it was ready to go straight away. Lovely lush Syrah, hints of pepper and graphite, smooth tannin, yum

And I opened this on Monday. 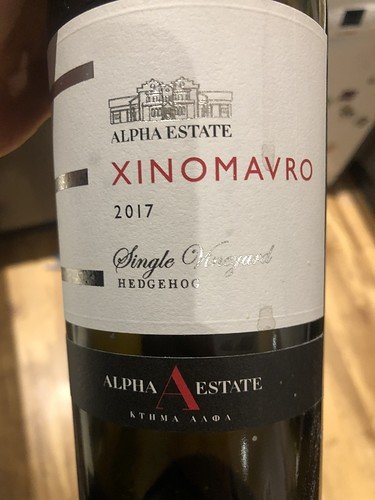 IMG_60023024×4032 1.81 MB
Had confit duck for supper and I thought a young Xinomavro could work. It was ok, but the acidity was too high and a little out of balance, fruit was there, but very much in the background, tannins noticeable but pretty smooth. I put the rest of the bottle away until the next day, but still a bit harsh. Decanted into the eto and left in the fridge until Friday, by which time everything was integrated very nicely, very approachable. Bit of a shame, but the last glass was absolutely divine.
31 Likes
Lewis February 22, 2021, 10:19am #130 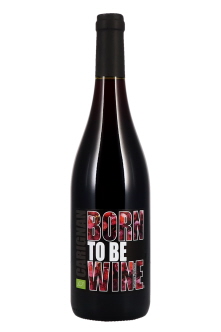 In all its fruitiest glory, this is a gorgeous, all carignan southern French red from the Ollieux estate with a walloping amount of ripe brambly fruit. The estate always used to offer a straight carignan, which we bought in times gone by, but then they stopped making it. Now, we are very glad to say, it has been reintroduced, made in a more contemporary and deliciously fruity style.

Had this carignan over the weekend as part of my wine education. Didn’t particularly enjoy it at first. As TWS description says it has bramble fruits but it was followed by bitterness. Can tannins taste bitter? That was how it seemed. I preferred it the following day when it has mellowed, the fruit seemed sweeter and the bitterness had all but disappeared. Can see why people like this wine, it’s fairly robust, would make a good BBQ red. 10 quid is a fair price. 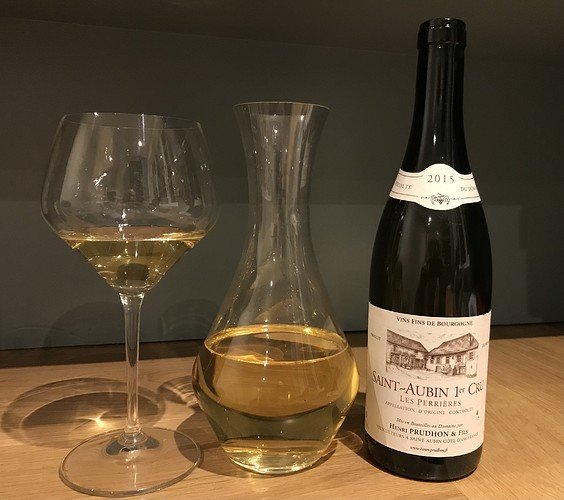 Enjoyed this on Saturday, and for my daughter’s birthday, we had a nyetimber classic cuvée- which is excellent and just seems to get better and better

Too short for high praise and too dark for fair praise.

A finely grained red from Baden in southern Germany, and a true bargain for lovers of pinot noir (known here as spätburgunder). All sweet, ripe cherry flavours (including the pips!) and great length.

This wine has received mixed reviews here and on the W/S customer review section. I was quite a fan, but the 2015 was quite a bit richer. Enjoyable cool climate pinot noir, will try out the 2018 in due course.

So are we saying let the Hedgehog hibernate for a couple more years?

Friday we had our usual fish but not our usual wine. Because we were doing a Zoom tasting on Saturday with Adam LaZarre, wine maker and owner of the California Cycles Gladiator winery we had 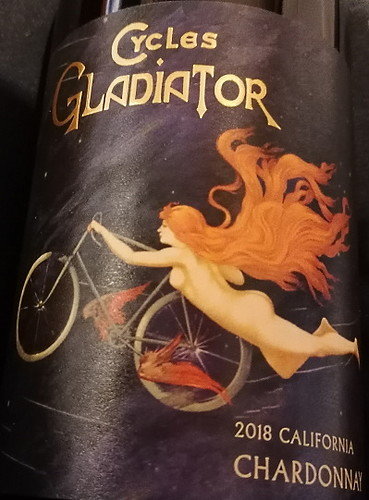 In the glass this was a golden colour which made me think it was going to be buttery and oaky, but I need not have worried. There was good acidity, it was not buttery or over oaked and it was very drinkable. 14.5%
Any complexity or subtlety it may have had escaped me, to me it was a good quaffer.

The tasting was organised by our wine tasting club together with local independent wine shop Flagship who also roped in the UK distributer. In the tasting fee we got three bottles of the Cycles Gladiator wine Adam was going to talk us through so we could taste along with him. But - call us rebels - we had the Chardonnay with fish on Friday. 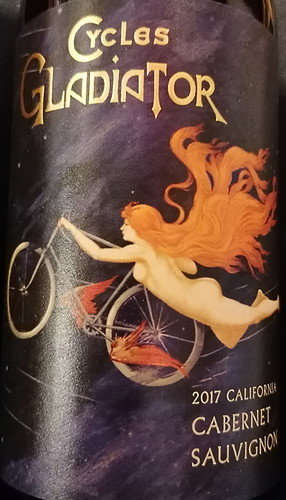 This in fact 87% Cabernet Sauvignon, 9% Merlot and 4% Petit Verdot. Adam says he blends in the other varieties to make the Cabernet more like Cabernet (No, me neither). The 2018 must have been atypical since it has only 76% Cabernet!

Grapes are sourced from Paso Robles, Mendocino and Lodi. He made a point of telling us the Merlot came from Margarita Vineyards, so presumably this means something to California audiences.

My first impression of this wine, and which I wrote down, was Sweet Bramble Jam, and the sweetness made it for easy drinking on its own. Mrs M. said it was ‘velvety’, but my initial impression didn’t change - I thought it was just too sugary.

I used Zoom’s Chat function to ask the amount of Residual Sugar (RS). Adam said that Cabernet can get to 15% abv, but this wine was just 13.5% abv (the Chardonnay was 14.5% abv and the 2018 vintage Cab is 14.5%). Adam said he stopped fermentation to prevent high abv levels, ( which to my understanding would mean there was unfermented sugar left.) I was not convinced by Adams eventual answer of 2g/L RS.

So, a crowd pleasing wine, inexpensive for California and I’d be OK with drinking it at a party, but as a food wine I’d prefer a drier style.

Sunday we went to New Zealand as country No. 7 in our Lockdown World Tour. As usual before taking the meat from the oven I poured an aperitif: 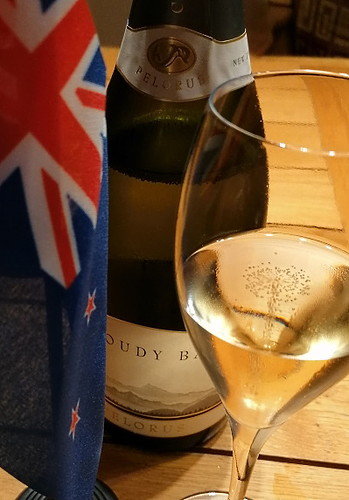 Our meal was New Zealand Leg of Lamb joint, roasted with parsnip and potatoes, with steamed carrots, cabbage and broad beans, accompanied by this beauty 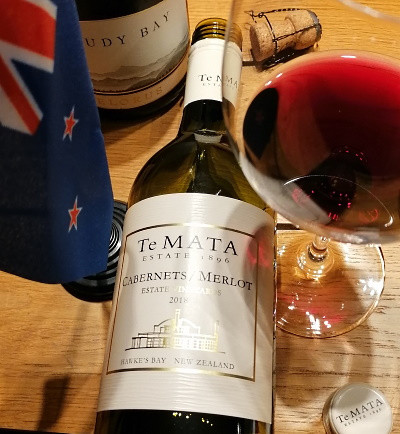 Of course it’s the law to pair lamb with claret, but there’s an exception allowed in Subsection 2, Paragraph 8 which, to paraphrase, allows a local wine of similar type when travelling abroad. As we were in NZ virtually this Bordeaux blend is allowable.

Pix of the food and more in the ‘It’s Time to Travel’ thread.

Yeah, I reckon your patience will be rewarded.

These with our Gymkhana food box.

Then this whilst waiting for my pork belly to slow roast… (not on the same day I hasten to add).

With a splash in the gravy this didn’t get to the dinner table, so popped a bottle of Dme de Cayron Gigondas (2010), which was jolly tasty.

A rich and concentrated Gigondas. The proportion of cinsault in this blend is among he highest used in the Rhône, accounting for the wine’s finesse and attractive silky texture. Complexity is assured by the Faraud family’s ownership of various plots throughout the region. Long ageing in large oak...

That used to be affordable lol

Pelorus! That takes me back. We drank it by the bucket on a trip with friends to Oz in 1999. Even in bars it was only about $20 a bottle ISTR (although I may have had too many to remember clearly…). Lovely wine. Suspect it’s not quite such a bargain now…

From a family owned property in the so-called ‘satellite’ district of Lussac Saint-Emilion, this is a ripe and concentrated red revealing notes of violets and liquorice. The blend is predominantly merlot, whose richness is tempered by the freshness and structure of the two cabernet grapes, sauvignon...

Last night it was a great big punch of tannin, of course, entirely predictably.
Tonight it’s a totally different beast, smooth, supple and full of gorgeous dark fruit - perfect with our home made burgers topped with melting camembert!

Pelorus! That takes me back. We drank it by the bucket on a trip with friends to Oz in 1999. Even in bars it was only about $20 a bottle ISTR (although I may have had too many to remember clearly…). Lovely wine. Suspect it’s not quite such a bargain now…

Cloudy Bay doesn’t have the price-premium fame in the antipodes that it has here, and you’re remembering a golden time more than 20 years ago; I expect if you compare bar prices in Oz now with your current pay , or your pay then with the price then of the fizz you won’t see that much difference.

All the same, Pelorus is a very classy fizz. I hate to use the ‘C’ word comparison, but it’s on a level with higher priced ‘C’.

Thanks for thinking of Mrs M.
But the devil is in the detail.

Villa Maria make a range of SBs; the one we are currently drinking is the Private Bin which cost a mere £5.25 when discounted during Sainsbury’s generous 25% off.

The £9.99 Majestic offer is on the Cellar Selection, next range up of 5 SBs. Villa Maria currently sell 7 different SBs in total. Confusing…

I hadn’t realised that about Villa Maria, who I think are pretty good as big producers go. They used to make a decent Riesling too although I haven’t had it for a few years.

Harking back to another thread, Klein Constantia also used to produce an excellent SB and also a Riesling. We drank the SB at our wedding. But I tried it again a few years ago and thought it had gone downhill. Perhaps I should try it again.

A post was merged into an existing topic: Weekday Drinking Thread [22 to 25 February 2021]

Well, there are good years and not so good year, and our tastes change. Also, one tends to hype up an enjoyed wine in one’s mind and expect great things of future bottles only to be disappointed whereas it may have been identical.*

There are many great South African SBs, by which I mean in the style of NZ. My favourite is Springfield Estate 'Life from Stone’ which I much prefer most years to their other SB, ‘Special Cuvee’ and also Fairview, Delheim, Durbanville Hills, Diemersdal, Steenberg, Spier 21 Gables — oh so many…

*the use of ‘one’ here refers to me, not you @Jimmybob

I think that’s absolutely right and have certainly experienced it myself.