Pigeons stripped my cherry tree to zero fruit - and they ate a quarter of the leaves as well ! Next year, it’s air rifle practice / pigeon pie.

Oh, and there was I looking forward to a snap of your netted plums

This is where the debate goes nuclear, as we call Bilberries Wimberries, and you wouldn’t have to closely guard a site for them, as they grow on whole hillsides (FTR, I think Myrtles are a different beast).

Bleaberry according to my Cumbrian dad.

But yes… Myrtles (I think - but can’t find the webpage) are white / pink / purple ? grow on a 5M high shrub in Sardinia?

edit: Possibly grow on more than one shrub, and in other places too.

Yes Myrtilles are the same as Bilberries. Here there seems to be 2 distinct types ripening at slightly different times, the earlier ones are sweeter and juicier and are ready late- July to early August, but locals here say that’s a sea change over the years when they used to be from mid-August. I’m familiar with Cumbrian bilberries and they are almost identical but tend to be smaller and not as sweet as the ones here. I presume that’s simply a climate effect.

Myrtle is a half hardy shrub which likes moist acid soil and which resembles box when trimmed but has largish fuzzy white flowers.

@lapin_rouge 's tip for redcurrants makes more sense than using a myrtille comb. The reason the comb works for the myrtilles is that the fruits are individually attached to the stem and often from half way up in the greenery and they are a veritable pain in the derriere to pick individually with fingers, not least as the plants are rarely more than a foot high; but gentle insertion of the comb into the bushes and upwards movement catches the fruits and doesn’t damage the foliage and the smaller unripe berries escape through the gaps in the prongs to ripen later. It speeds up the harvest 5-10 fold I would estimate.

This is for @MikeFranklin (admittedly there are some 2020 vintages in the line-up too). A further tip is that here, at least, there’s a jam sugar product with double strength pectin so you can make 2:1 fruit to sugar jam which is super-nice. 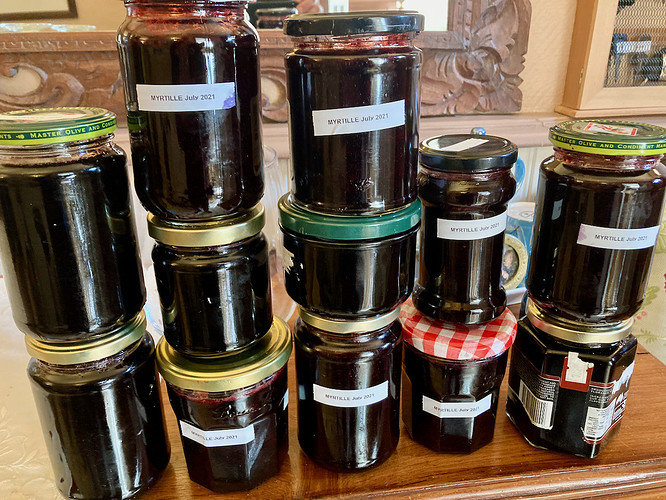 I add my own pectin rather than increase the sugar anyway.

Try adding redcurrant to the mix - it’s rammed with pectin (leastways, mine are)

We have a myrtle bush (called hemblass) and I wanted to do something else besides eating the berries raw. Well my aunt told me that her 85-year young friend Milady makes ” a delicious” liqueur with these myrtle berries. I got on the phone to...

These wild bushes get loaded with berries this time of year. Their history goes back thousands of years in the area, and the berries have a reputation for lowering cholesterol and easing digestive issues (among other uses) and are used in herbal...

I have different recipes for all my different fruits. Some need pectin (strawberries, rhubarb) some don’t (gooseberries, redcurrants) and some just a little (plums, raspberries). Since pectin is a very natural product (I think the one I use is made from apples) I have no particular worries about using it.

I make Medlar jelly sometimes - when the fruit is green and hard its full of pectin, yet when bletted the pectin is all gone! and because the fruit are usually in various stages of bletting the results vary somewhat. Definitely worth making however.

Don’t they generally say don’t use over-ripe fruit for jam for exactly this reason? In fact I think slightly under-ripe fruit is often recommended.

We seem to have disappeared down a bit of a rabbit hole with this!

Think you need a gun @MikeFranklin !

V interested to see the 2009 Coche-Bizouard Bourgogne Blanc there. Was it under DIAM? I sense my Coche-Bizouard wines are maturing very gradually (good!) so good to hear the 09 was good. How mature did it seem?

Thanks @GuidoD . It was under DIAM and was “fresh as a daisy” but had developed lots of mid-palate richness and great balance into a long finish.

Brilliant- thank you. I’m planning to let my 2010 Meursault Ormeau rest a little longer. So this is handy to know. At risk of disturbing him… I wonder if @Toby.Morrhall , who’s championed DIAM, would find your post interesting (with apologies if not!!)

Glad to hear that wines under Diam closure are performimg well. Thanks for your feedback.