Yes, it is. And far more practical than the slate starter plates bought, when such things were en vogue, at the same time

Fine if its cold meat / salami etc, but not so special if the starter is hot or has any kind of sauce !

Thankfully that trend seems to have passed.

A bunch of these were left lying around after we had the neighbours over for a barbecue some weeks back; someone must have brought a load and not finished them, so what the hell, why not, I’m going to work my way through them: 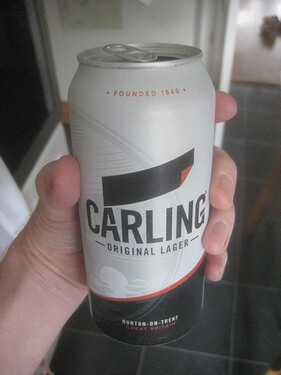 The Other Half: “Are you drinking Carling, Darling? A hundred bottles of posh wine in the house, and you’ve picked that…?”

My very low expectations have served me well: it’s actually drinkable. Well, mostly because it tastes pretty much of nothing, which means it’s cold, fizzy, refreshing and - most importantly - not actively unpleasant.

Takes me back. I’m reminded of my late-teens hierarchy of the basic, big-brand lagers - all of which were of course more functional than enjoyable (and I quickly moved on to more flavoursome beers as I entered my twenties), but it went something like this:

Just be thankful you didn’t grow up in the era of Watney’s Red Barrel.
And Hofmeister.

I have had the misfortune to follow the bear.

Castlemaine XXXX, Skol, Walkabout (which is the last thing one could do after imbibing a few of them). There were some very poor lagers and ales TBF sloshing around in the 70s to 90s in particular. I was seconded to Coors Brewers for 6 months in the early noughts and my weeknight digs in sunny Burton on Trent was William Worthington’s old house. The US Execs would stay there when visiting, which was hardly ever. It was just me mainly then knocking around in the evenings. They had a fridge with all of Coors product including licensed beverages which was totally free and restocked every morning. I did avail myself of the odd Carffrey’s with my evening Be Good To Yourself Sainsbury’s sandwich, LOL. It was an experience shall we say…

EDIT I forgot to say that they were extremely proud of their Carling brand, with then and possibly still, eye-watering sales. Considering it tastes pretty much of nothing is no mean feat I guess.

Perhaps if you’ve been brought up on American beer…

At least down south you didn’t have to put up with “red cans” and Tennents with the dreadful girlie pictures on them. They were truly terrible, and don’t get me started on Double Diamond. I sometimes can’t believe what rubbish we were served up in the seventies and eighties! But then at the same time there was Blue Nun etc.

someone must have brought a load and not finished them

Or did someone decide to offload them from their own left over pile whilst tucking into the more delightful array of beverages you had on offer?

We did, however, have to put up with Younger’s Tartan which, I suppose because it was cheap, was the choice of many under-age drinkers. 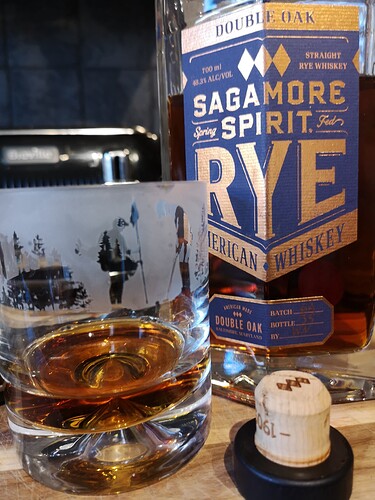 Anyway, back to the main matter in hand:

This was one of Mrs C’s requests following the Italy tasting last week. I didn’t need much persuading, it’s a lovely youthful purple in colour, sweetish berry fruit, balanced tannins and acidity with a hint of smokiness.

A couple of wines to report this week - vastly different.

First up a traditional 2014 skin-on qvevri-fermented amber Rkatsiteli from Vachnadziani in the Telavi region, Georgia. I don’t remember seeing this winery when we were over there; this was sourced from the UK more recently. But I have an enthusiasm and liking for such wines; the issue is more often what to pair them with.

This time I wondered if baked Cromer crab which is mixed up with cheese, cream mushrooms and black pepper might work. I usually have something full bodied but lemony like a young unoaked Chablis. But this, sadly didn’t really work though I hoped the savoury earthy elements would be a good match. The half left over I consumed the next day without food and enjoyed it much more. It’s also a mistake to chill it. 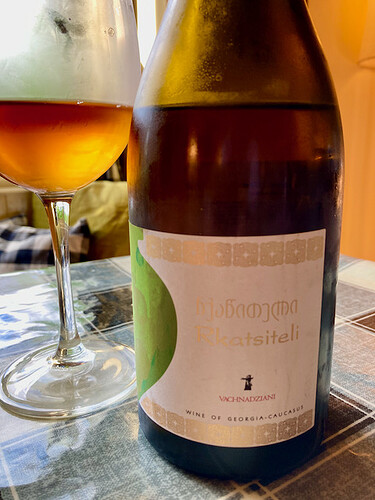 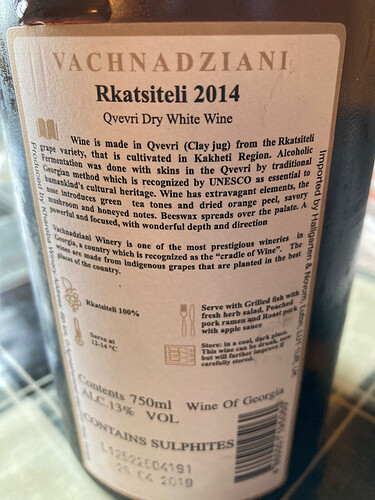 Next up, tonight, much greater success. This is the last of my Coquard Loison-Fleurot Chambolle-Musigny 2015’s and the nicest - (damn; wish I’d kept the others longer) no longer closed and sulky, but silky and perfumed, good depth and nice gentle red and black fruits but still nicely piquant with its low level acidity. It paired well with “Ouefs Sur Le Plat”, which is basically pan-baked posh bacon, eggs and cheese, with roasted tomatoes and french beans. Both the dish and wine were decidedly more-ish 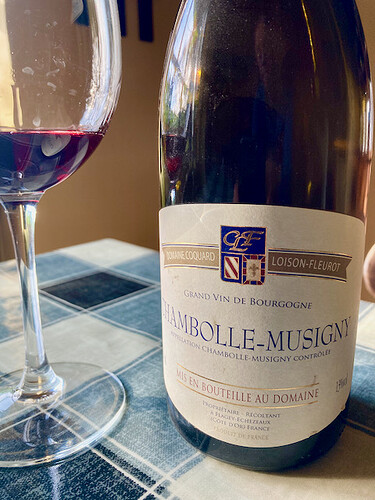 I’m intrigued. With Bourbon I’m ‘at the shallow end’ having never tried anything I’d bother repeating, but that sounds good. Where would one get a bottle?

Another coup on the half bottle department for @Sarah 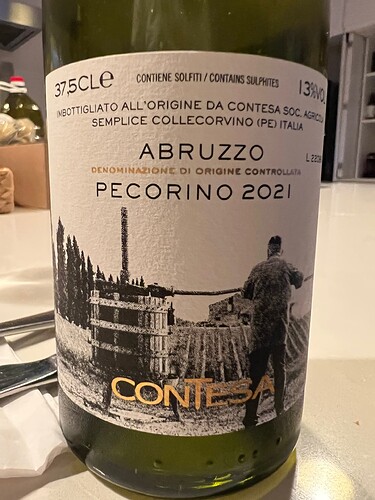 Usual places, Master of malt or whisky exchange. This bottle was bought for me by a friend (bottle of whisky is the prize for our annual head to head in fantasy football, he was very generous).
The only other double oaked bourbon I’ve had is Woodford reserve and I wasn’t impressed, too harsh, and I like their standard offering.

Where did you obtain the Campbeltown from? Looks intriguing.

Taking one for the team in the name of research and thankfully reminding us all NOT to drink such rubbish - very brave and selfless, as always.

Well, mostly because it tastes pretty much of nothing, which means it’s cold, fizzy, refreshing and - most importantly - not actively unpleasant.

Bottom of the can says best before 30/11/22 but I reckon it’ll go on longer than that if you stay patient.