This order arrived today - I’m hoping something will be along the right lines. 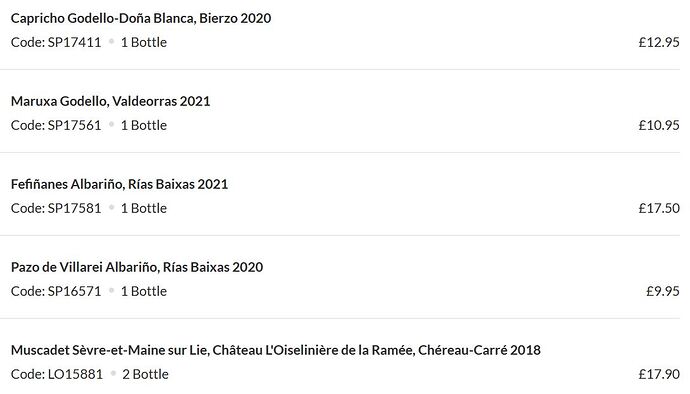 Joined the Ducru Beaucaillou tasting this evening. What a wonderful tasting - well put together with perfectly delivered samples.

Huge thanks to @annaspooner in the tasting team, and @SykoWino for bringing this to us - and Bruno Borie presenting from the chateau. 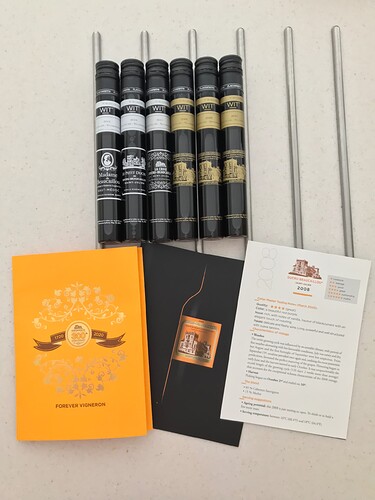 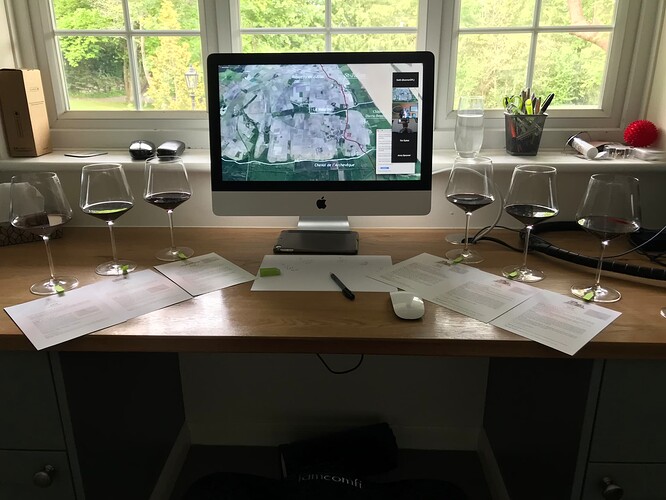 Tonight is going from the ridiculous to the sublime

Just noticed this wine got a silver in the 2022 IWC awards😬 Haven’t tried it myself and after your report probably won’t.

So I’m looking for something similar

Similar-ish, though a different blend - this is just lovlely:

Planning to share bottle number 2 of it with friends who love Godello when hosting next weekend.

Edit: Doh! Just saw that you had already ordered one… Enjoy!

I can confidently say it’s the winemaking

Tonight
This is a fantastically rich and rounder style of champagne, just beautiful !
I must confess that this bottle has been resting for a year or longer and it pays dividends.
It accompanied some simple prawns wonderfully 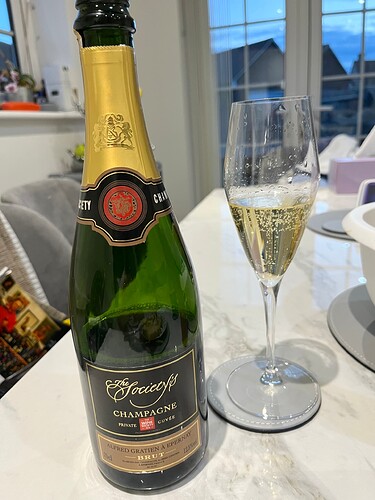 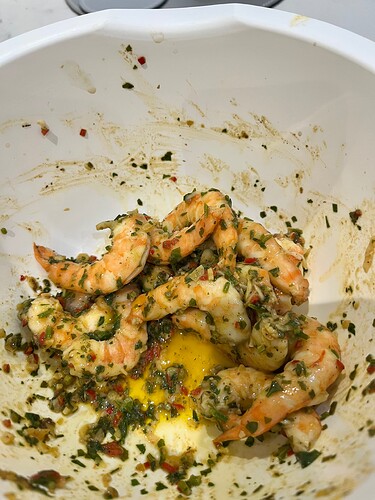 I did complete an effective raid on the Duty Free at the airport whilst waiting for the carousel. The prices were about 2/3 those at Vinbudin. But an amusing sign at the carousel was… “If you’re wondering why all that luggage is going around unclaimed - it’s due to Icelanders in the Duty Free stocking up on booze” ; or words to that effect.

So, here we are in our hired motorhome and our first meal, made by ToH; fresh fish -possibly coley, local Icelandic new potatoes, parsley sauce and cauliflower (admittedly from Spain) and a fairly decent Cava (cost - about £15; likely double its cost in UK; thus tolerable) 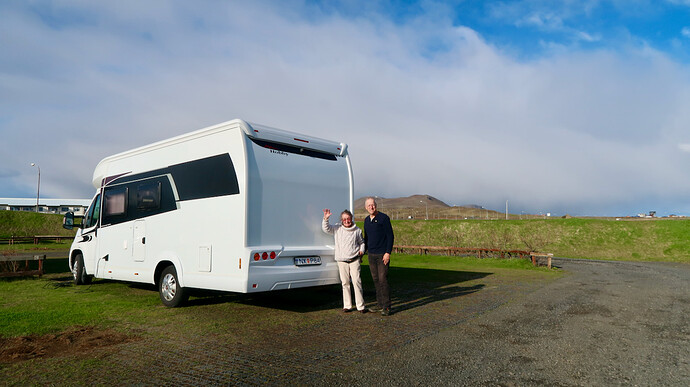 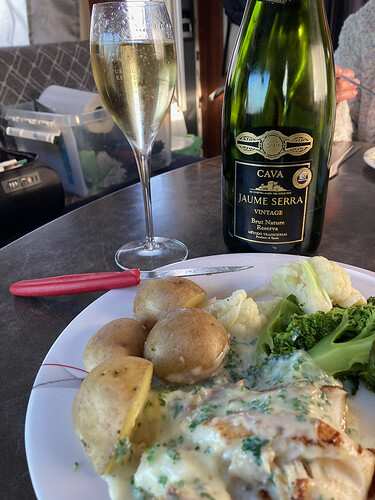 Similar-ish, though a different blend - this is just lovlely:

Remarkable timing! opened a bottle last night and very much enjoyed a glass. Slightly pétillant, clean & fruity. With hake wrapped in smoked bacon (I love hake, very under-rated in the UK). Will have another glass or two this evening, possibly with a prawn dish.

Great post. I think it’s been one of the few good things to come out of the pandemic that those of us who are miles away have a great programme of on-line events to take part in now. Although a combination of the events and this community has increased my spending on wine exponentially! 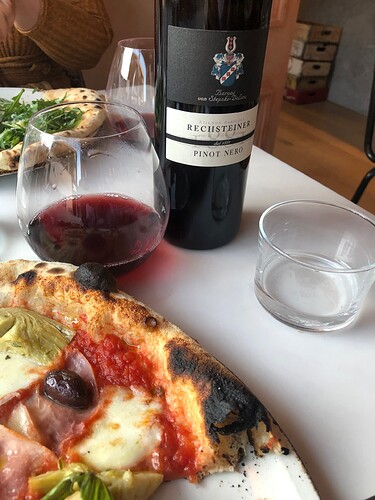 image|Picture shows a pizza, a rustic stemless wineglass with a light purple red wine and the bottle of wine1920×2560 351 KB

End (thankfully already) of a truly awful week. We went out for pizza. The pizza was great.

It was joined by a Pinot Nero from Venizia DOC. Pinot Nero Azienda Rechsteiner 2019. Very cheerful wine with raspberry and blackberry. Maybe a hint of something spicy if you squint (come on now Patrick, your tastebuds can’t squint). Surprisingly long with a slight amount of tannin that reminds me of my mums bramble jelly (now there’s a helpful tasting note) which brings just a touch of elegance. For £25 in a pizza place in London this was a delightful and happy wine. It’s never going to wine any awards, but it’s far more enjoyable than a lot that will. To plagiarise @inbar’s german pinot noir review of earlier there isn’t much to over-think here; instead there’s charm and quaffability. It wasn’t over powered by my Capricciosa, but went better with she-still-isn’t-called-mrs-pig’s truffle and mushroom.

[Picture shows a pizza, a rustic stemless wineglass with a light purple red wine and the bottle of wine]

[Snark for Bordeaux reviewers appears to have been directed inward today]

[Picture shows a pizza, a rustic stemless wineglass with a light purple red wine and the bottle of wine]

was just wondering if there is a clever way of adding alt text in discourse, not that yours is not clever

Not that I’ve found, hence doing it this way.

Monday We had the second portion of sausage cannelloni bean stew whose recipe I posted about here. With it I was keen to try 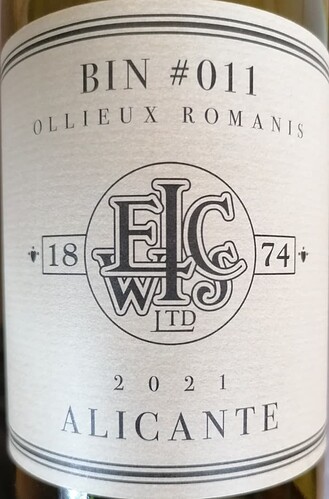 The wine was just so gluggable, and only 12.5% abv. All stainless steel, no wood tannins, soft and almost jammy. And it stained the glass inside and even the rim, with a purple.

Surprisingly this bin is still on sale, some record surely for the bin series… 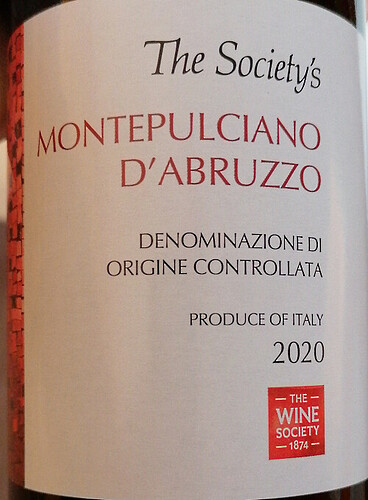 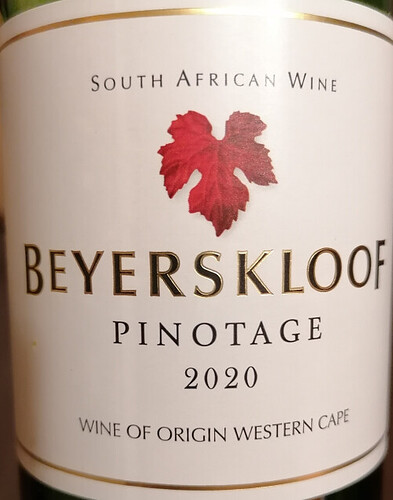 Thursday I grilled Cumberland sausages and roasted Jack Hawkins tomatoes, with generous amounts of garlic cloves, ground herbs and black pepper and a sprinkling of EVOO, served with toasted home made seeded bread. I was keen to see how Bin 11 compared with

You wouldn’t know they were both Alicante Bouschet. This was 14% abv, much less exuberant and jammy, and although darkly coloured, it didn’t stain the glass as Bin did. It doesn’t say on the label but I feel this isn’t a 100% varietal but has some other variety or varieties blended in that give it structure, As to which I prefer, they are too different but Bin costs £3 more than Found.

I like them equally, but would pair Found with a roast (for example) while Bin would be happier with sausages or ratatouille (for example).

(Bin 11 and Montepulciano from TWS, Beyerskloof from Sainsbury and Found from M&S)

I thought there might be a way. Couldn’t find anything anywhere online, so I had a bit of a play…

Adding a | after the size flag and then putting in your text works, sort of.

I have no idea if this works with screen readers and things, but it’d be really stupid if it doesn’t.

I just had to share this with you all. Last night I opened a bottle of wine which I normally do but this time it was different it only cost £7.50. Now what good wine can you buy from TWS that cost £7.50. Well I will share this with you all it was Pinot Noir Pure Vallee Vin de France Bougrier. It does not pretent to be a great New Zealand wine or a Pinot from the USA it is just utterly loverly. Great nose and even heavy legs driping along the glass a real find. As we talk I am ordering 12 bottles it really is worth a try for a midweek Pinot.

The theme of this week appears to be reasonably priced uncomplicated Pinot Noir bringing people joy. I’ll stick a few bottles of this in the next order.

Glad to read that you have now restocked with no-brainer™. The world had temporarily failed to spin on its axis when saw you were all out of it last week!

Simply replacing the first bit of text (which says “image” for you) seems to work even better.

Just tried it out in the weekend drinking thread. There’s even an edit button in the preview pane, which lets you change it: