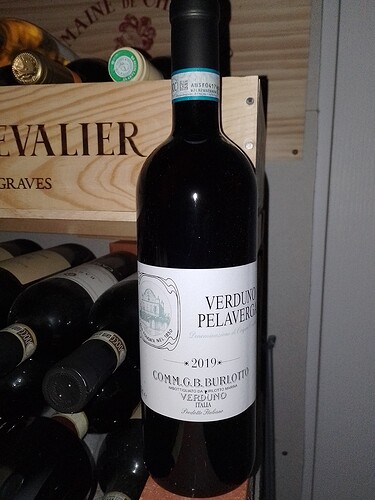 Because… well why wouldn’t you?

Interestingly this split the room. I (and by proxy my other half) have had a reasonable amount of Pelaverga, principally from the Castello di Verduno. I like it - it’s a slightly different interpretation of the grape (more red fruit and tobacco than the others red fruit and sort-of-spices).

However, and I feel like I may face a lynching from the collected audience on here (!), my other half isn’t particularly keen (she prefers the other), saying this smells like fake cherry. I explained the maker, the price and the ‘desirability’ of the producer. She wasn’t impressed. That’s me told!

Opened this 3 nights ago and it was pretty closed. Now, it’s woken up, smokey, gamey nose, cherries; quite a fresh nose. Really lovely acidity and quite a bit of grip. Mouth filling. Not a great deal of fruit ; it seems a little closed still, and tight with the stewed-black-tea tannin. I like it, but it’s holding something back, or maybe I can’t find it. 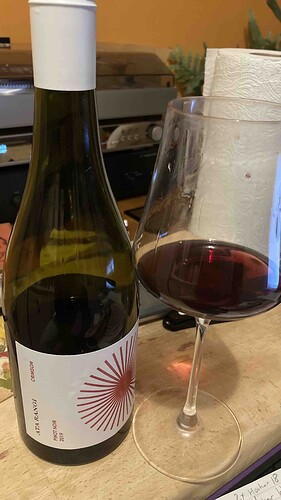 PN has always been one of those varietals that gets me anxious; I never know what I’m going to get, even from one glass to the next, and yet I keep coming back.

I had that precise same feeling - that they were holding something back; or maybe I wasn’t in the right place for their charms.

PN is a grape I’ve not that often bothered with since then, though I always feel it should be right up my street. But I have an anxiety about buying it.

“PN is a grape I’ve not that often bothered with since then, though I always feel it should be right up my street. But I have an anxiety about buying it.”

Reminds me of some relationships I’ve had

Monday is usually an AFD here but, stuff convention, I thought I’d give this a go with roast chicken thighs, sumac and pomegranate molasses, a couple of salads and a flatbread. 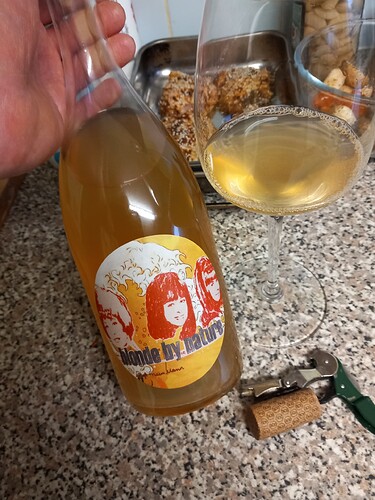 A Blonde By Nature 2021 from Pittnauer. Bottle one from the Austrian ‘New Wave’ mixed case. An orange wine at the fun end of the spectrum according to TWS. GV. chardonnay and pinot blanc make up the bulk of the blend which was fermented in barriques and amphorae.

Lives up to its name, a hazy blonde colour in the glass. Orange peel and pith, tree blossom and some tropical fruit notes on the nose. Similar flavours with a touch of tannic grip and a refreshingly salty, almost effervescent seltzer-like, quality to it on tasting.

Interesting, enjoyable and a pleasant change from the norm but, like most rose wine I’ve tried, it wasn’t as captivating as a similarly priced (£14.50), well chosen, still red or white might have been. I guess I’m set in my ways these days, old dogs, new tricks, etc !

With you on this wine - had the 2020 just the other week and didn’t feel it was worth mentioning; a fun curiosity, something you’d take to a party to be different. Quite a lot of haze! 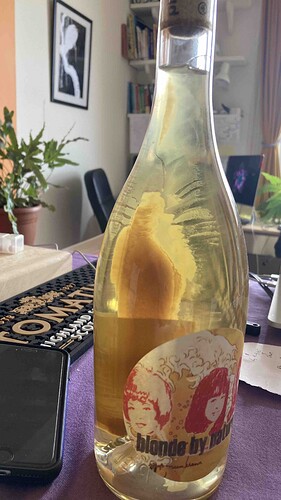 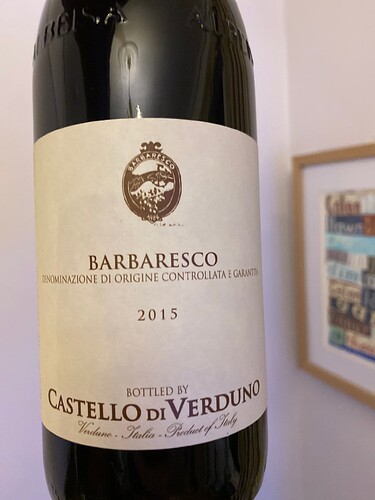 Quiet weekend here. So raiding one of the recent extractions from reserves.

Was quite keen to try a Barbaresco as it’s quite new for me.

The nose is most beguiling and is getting better in the glass.

This is a clear wine to the eye. Raspberry & strawberry would be the identifiable fruits for me but equal fennel/liquorice to the mix. It’s mellow, light touch with all these flavours

Drink dates to 2023. I think I can manage the other two before the end of next year

Drink dates to 2023. I think I can manage the other two before the end of next year

Thanks for the tasting note. Sounds delicious. I have a couple of these in a reserves mixed case that I wasn’t planning on withdrawing for a few years. Very interested to see how you feel about the next one and whether there’s any requirement for an unscheduled withdrawal.

requirement for an unscheduled withdrawal.

Yeah I was very much wondering about the remaining two bottles I have.

Drink dates were not mine but the conservative (understandable protection of TWS promise)
https://www.thewinesociety.com/product/barbaresco-castello-di-verduno-2015

I’ve not got enough experience with Barbaresco to call its development path from here.

Generally speaking, I did think the intensity of the wine was fairly low, but in a good way. I think that mellowness is going to be retained / amplified. Perhaps a hint more sweetness to it. The detail and flavours were delicate and I’m not sure how they’d regain detail/intensity. I’ve only had a handful of examples where that sort of magical reinstatement of vigour seemed to occur across wines?

What I could easily imagine is greater perfume developing. The nose was definitely a large portion of the enjoyment.

What should I be looking for as it ages? I’ve got 2 * Barbaresco Riserva Collectors Cases (2016 & 2015 in reserves). So taking a more proactive interest

I’ve not got enough experience with Barbaresco to call its development path from here.

Generally speaking, I did think the intensity of the wine was fairly low, but in a good way. I think that mellowness is going to be retained / amplified.

I’m in exactly the same position, no idea and ultimately hoping for a joyous nose, but my 2 bottles aren’t enough to judge that very well. Just going to leave a little while and pay attention to helpful reviews like yours 🫡

My impression is that 2015 Nebbiolo is coming around relatively quickly. I tried a 2015 Barolo a few months ago and it was drinking well. By contrast, the one 2016 I’ve tried needed plenty more time (but you could detect the underlying quality). 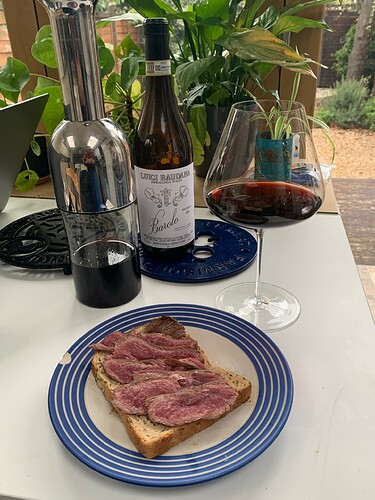 @wine.arbitrageur @Brocklehurstj @Aspedini
The last 2015 I had was about a year ago or so and from memory it needed plenty of air and it was very primary.
I have not had the 2015 castello do Verduno but I would think it’s at the beginning of its drinking window which makes me wonder from @wine.arbitrageur notes if this particular vintage from this producer is so unusual.

I think it is a reflection of me…

I mean the cast iron trivet. Looks like the one I got from Farmison

yep, the same… unfortunately the customer is also in the picture as a reflection in the eto, which I only realised after your reply

At least you were dressed!