I guess the hour in advance here in France excuses me for setting up the week’s thread. The afternoon consisted of winery visits to the commune of Arlay in the French Jura, and the two big names there, Chateau d’Arlay and Jean Bourdy. Both boast generations of viticulturists / owners, and the former claims to have the oldest chateau - vineyards in France, dating from the c13th. One each has a unique wine which was another reason for seeking them out.

Chateau Arlay - we were hosted for an extensive and entertaining free tasting by the owner himself le Comte Alain Armande-de-Laguiche. Walk-ins welcome. Here they make the unique Vin Corail which is a co-ferment of all 5 Jura varieties and comes across as a light red, typical Jurassic style and keeps well. The fruit is not exactly picked on the same day; the reds first and within a few days the whites added. They also do a non vintage blend “Rouge Reserve” and the current, and probably last, issue is a blend of the 3 reds taken from 2004/ 07 / 11.

Next up the (famous) Domaine Jean Bourdy, which exports mainly to USA which has an insatiable appetite for their (deliberately held back) legacy vintages - and at a price. Again, walk-ins welcomed and an extensive tasting offered and the current issues priced very reasonably (2014 Vin Jaune Cotes de Jura is €32) But I came mainly for the unique Galant des Abbesses, a weirdly-sounding sort of amalgamation of a Macvin (ie like a Pineau de Charentes - fresh juice plus marc) , a Maderia (cooked to 50 degrees) and a vermouth (secret spices and aromatics added) and usually I would run a mile from, actually was utterly and surprisingly delicious. 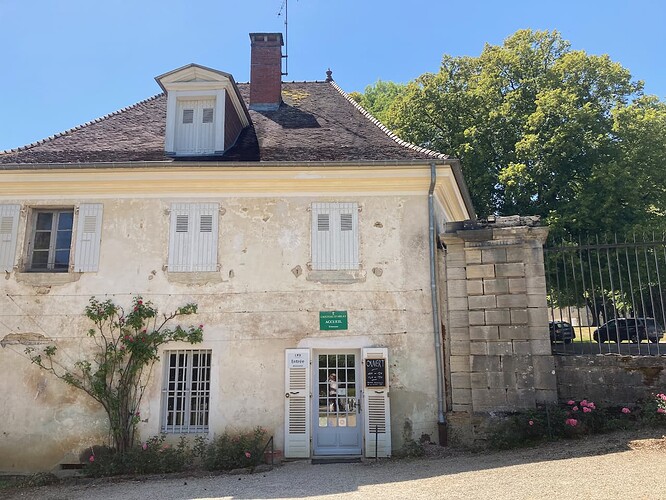 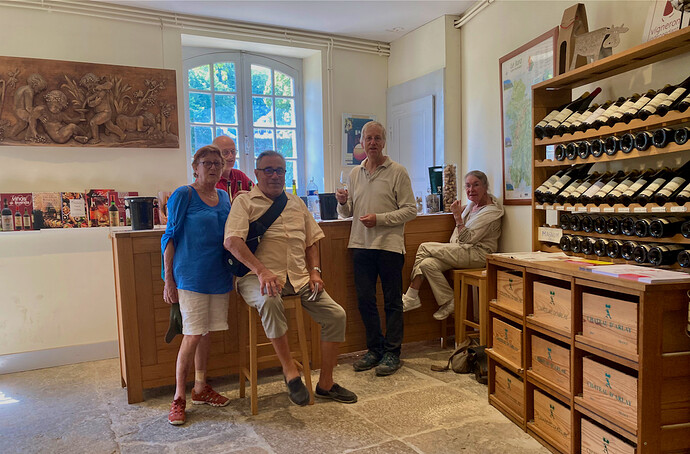 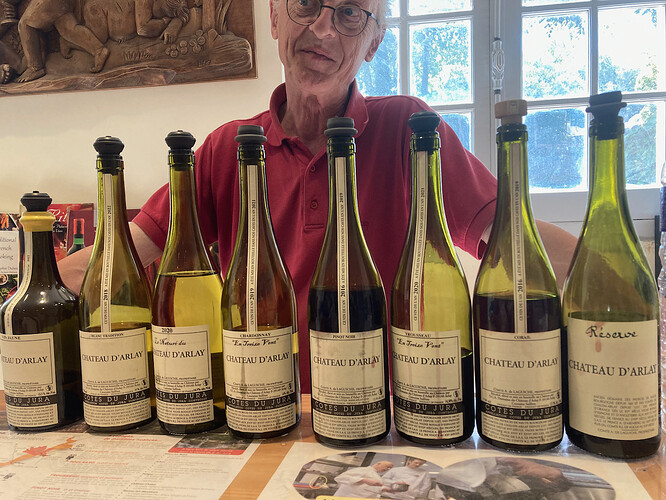 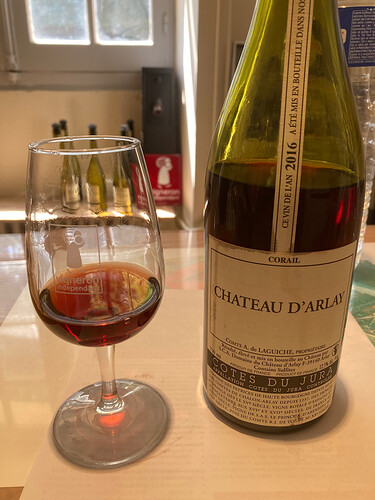 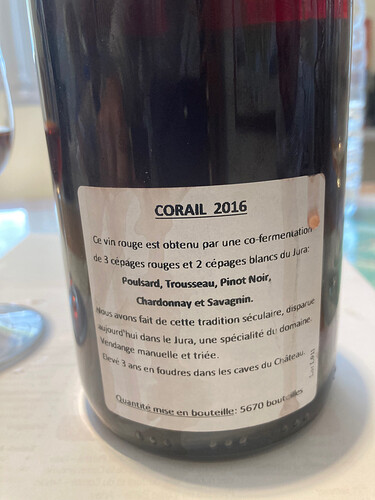 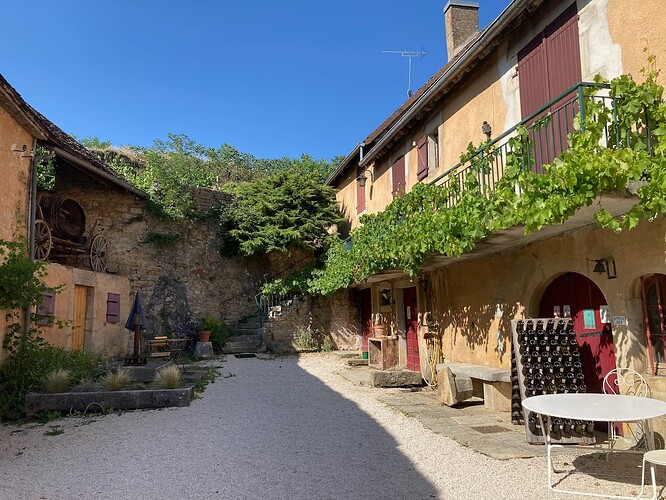 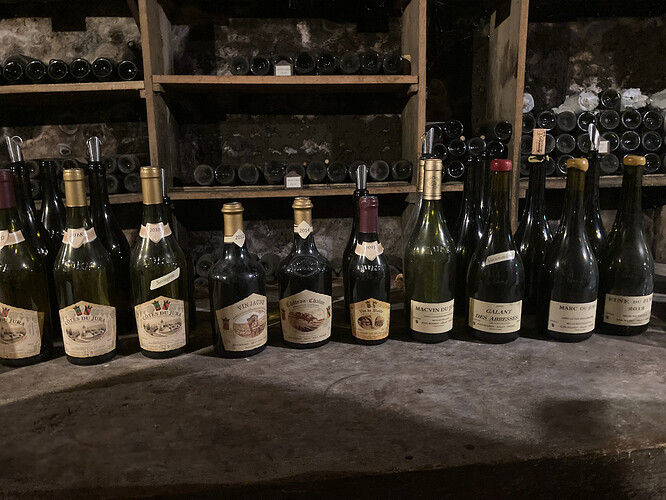 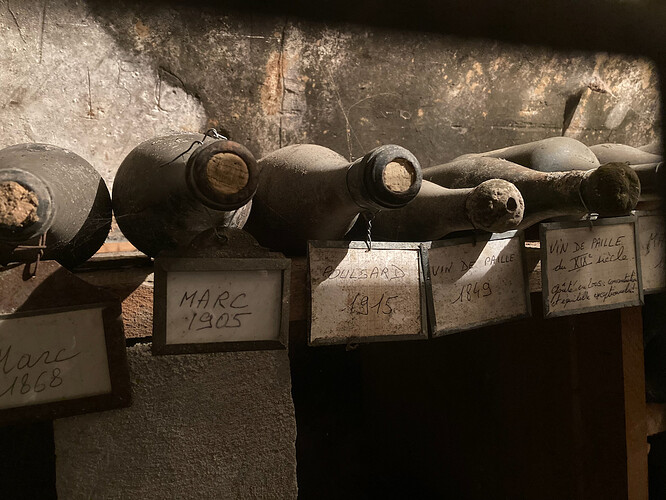 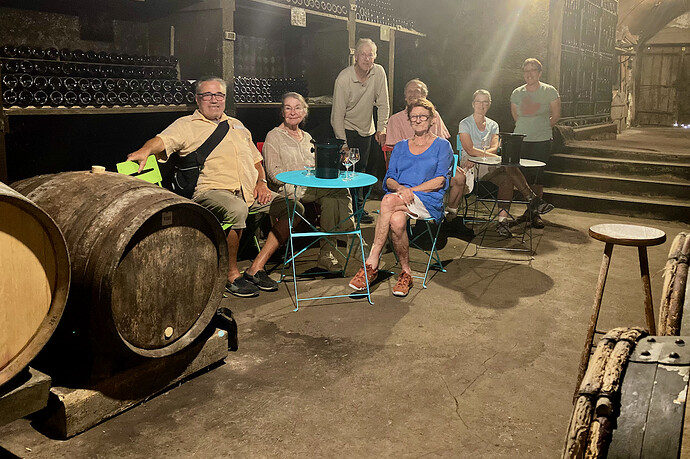 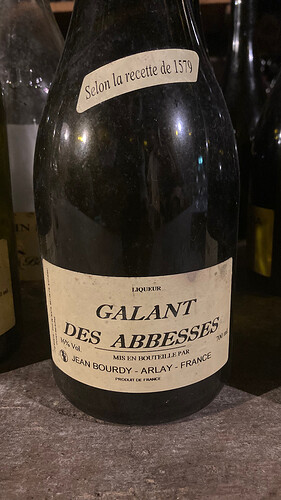 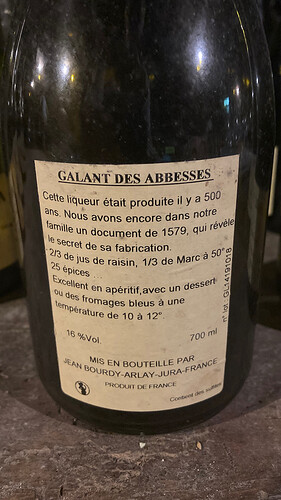 Kids demanded meatball ragu this evening, for which a red wine was required. Given the temperature outside, that red wine wouldvhavevto be chilled, so I thought it time to crack open my only bottle of this 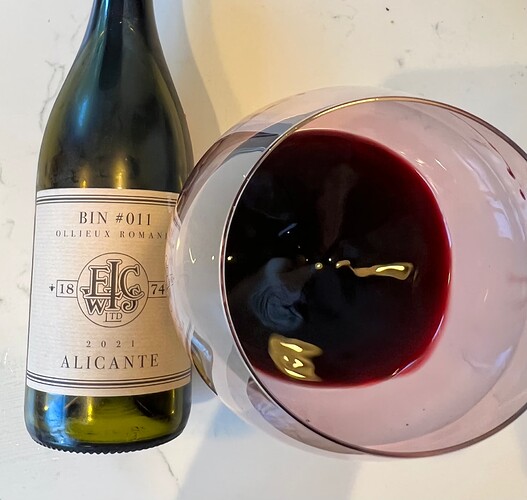 image1920×1819 152 KB
The colour is amazing. It looks like half a pint of Mega Purple!! Certainly added some colour to the ragu.

Delicious and gluggable straight out of the fridge, no harsh tannins and super fresh acidity, even if the aromatics were somewhat subdued. Once it had warmed a little it became more expressive and put more fruit on the nose but no less enjoyable. Nice, uncomplicated summer wine.

A chilled Refosco to relieve the heat this evening: 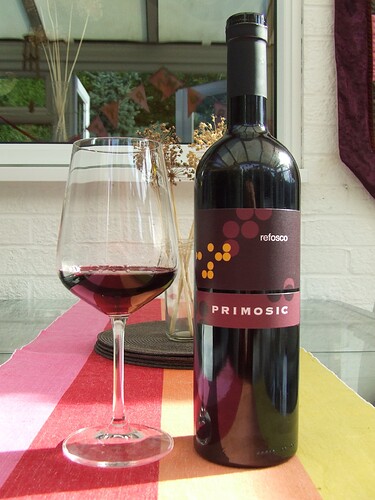 A lovely glass of wine, this!

Pale ruby, with a perfumed nose full of pot pourri and violets, blueberries and cherries and a kick of spice (clove, possibly). Tangy on the palate, with sour cherries and bramble but also a deeper note of plum and blueberries, mixed with parma violets, baking spices and a savoury, slightly medicinal (in a good way!) note on the finish. Absolutely delicious chilled, with lively acidity, mellow tannins and a decent finish.

Watching the wind (and the neighbour’s recycling) going crazy out there… feels like a storm is on its way.

These here over the last two days for some fleeting relief from the sweltering heat. Apologies for the duplicate pic BTW… 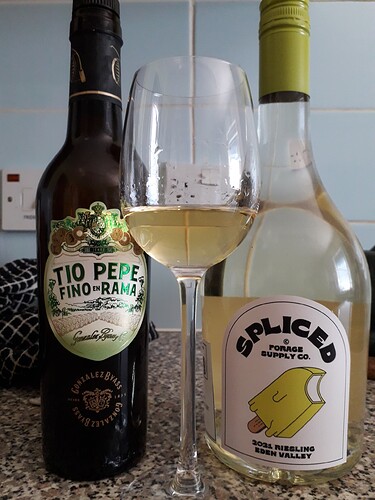 Well described in TWS notes. Fresh and complex, it seemed to have just a bit more of everything over the standard bottling. The half bottle size was perfect for solo enjoyment so added two more to Friday’s impending delivery.

In many ways the image on the label describes it better than I can but here goes anyway.

Fresh and zesty lemon and lime fruit with a twist of green herbs on the nose. Very similar on tasting, by no means complex but the clean and pure citrus flavours were delicious nevertheless and its snappy acidity provided even more refreshing cut. And yes, it did have an iced lolly-like quality to it too. On a day like today it was perfect but no doubt I’d have moaned that it lacked complexity and wasn’t the best VFM if it had been broached on a sub 25 degree day !

Edit - I just about managed to summon up the energy to prep some food too. The Fino was spot on with some prawns marinated in lemon, garlic and parsley and the riesling was a good match to dinner… 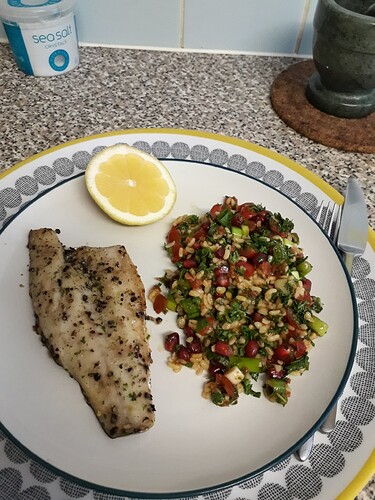 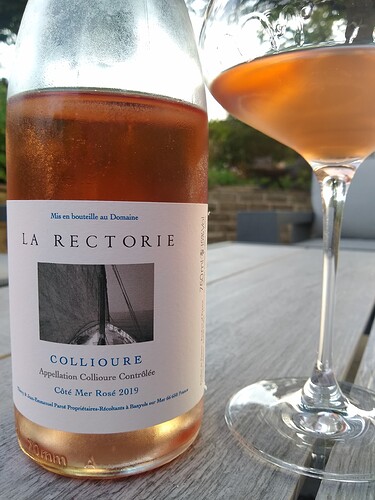 Seems like as good a time as any for a 15% Rosé.
Absolutely superb and going down a treat now the sun has lost its sting.

In sad news this evening, we discovered a swollen and drowned animal in our pond. Wasn’t sure what it was until I scooped it out and it turned out to be a hedgehog. Didn’t realise we had them around us but have since put some water trays out so hopefully doesn’t happen again.

Seems like as good a time as any for a 15% Rosé.
Absolutely superb and going down a treat now the sun has lost its sting.

Saw that. I immediately went to purchase some after reading your review but missed out. Will keep an eye out if they pop back up. This 2019 is something wonderful I tell ya. Obviously not as eloquently put as yourself but it is getting some high marks and approving nods around these parts.

One of our infrequent forays into midweek drinking. Homemade linguine with prawns, tomato, chilli and peppers, and René Muré Steinstuck Sylvaner, 2017. 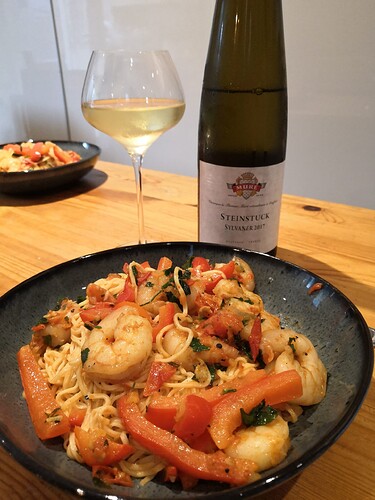 Really top-notch Alsace sylvaner - ripe apples on the nose, dry but good body, and a flinty, stony minerality to the finish, allied with typical sylvaner bitterness. Long, a bit spicy, and completely satisfying.

Hope everyone is OK in the heat.

Diligently following the recommendations in Wink Lorch’s guide to call in at Domaine de Montbourgeau - (which TWS members will realise is its most prominently -listed Jura producer, the savagnin, vin jaune, de paille, and crémant are usually available), Phillipe Vandelle, and Chateau L’Étoile.

First… “L’Étoile”. an AOP citing the eponymous village. Most references are the characteristic fossils found in the soil here, bearing witness to the limestone sedimentary terroir. These little “5-star” fossils are the stems of Crinoids; prehistoric immobile sub-marine animals - which exist to this day. They evolved into mobile animals including starfish. But… other references suggest that the 5-sided stars relate to the 5 hills that surround the appellation. But evidenced by our visits they all go for the fossil connection as its much more fun !

Dom de Montbourgeau is only open on Mondays and Tuesdays; owner Nicole Deriaux agreed to our visit but she was harassed as it was the day the mobile disgorgement team were there for the Crémant had arrived. Tasting was delegated to the Girl, who turned out very au fait and in fact her father was a Comté cheese maker in Poligny and she did for Mme Deriaux on these days. 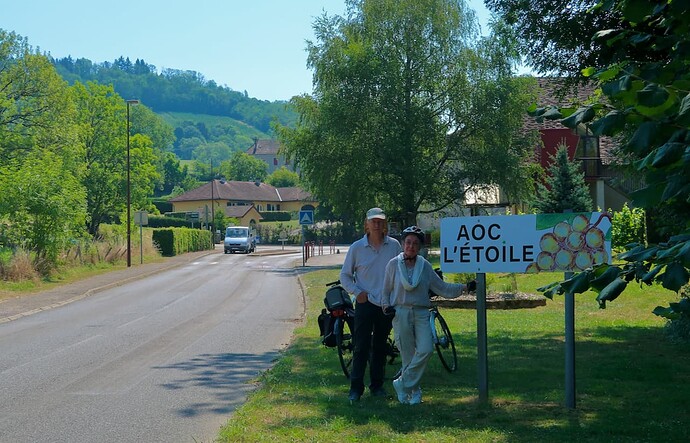 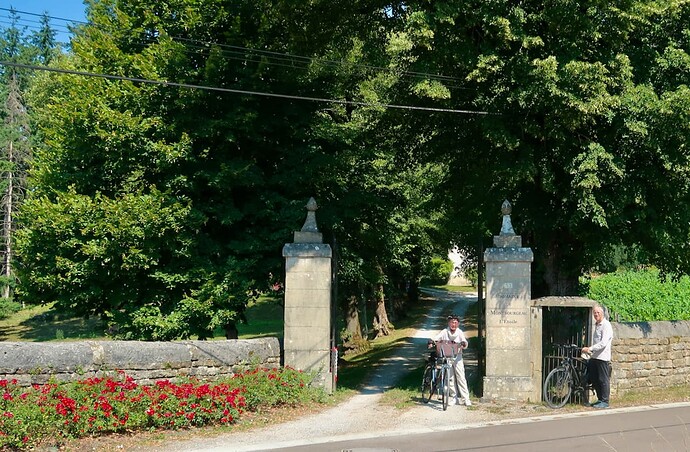 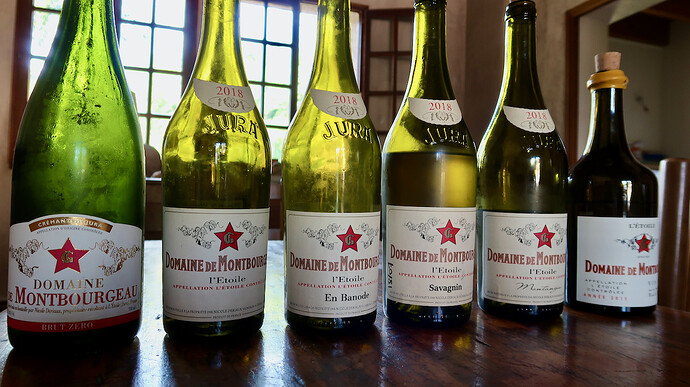 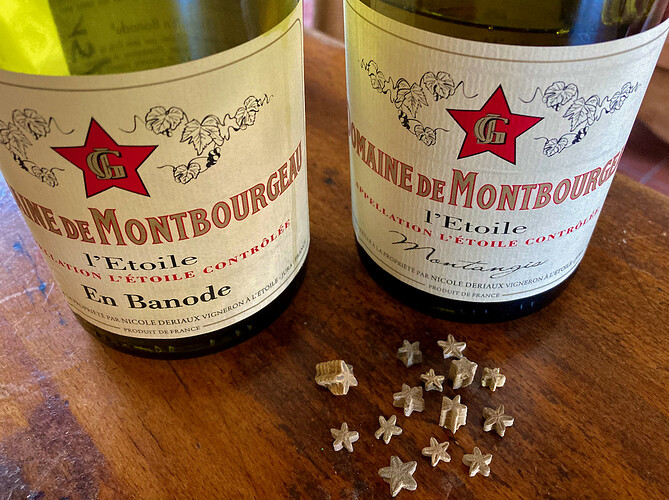 Next up… Phillipe Vandelle - or rather his next in line, son, Valentin. 5th generation outfit - usual range of chardonnay and savagnins - the Crémant was the star. 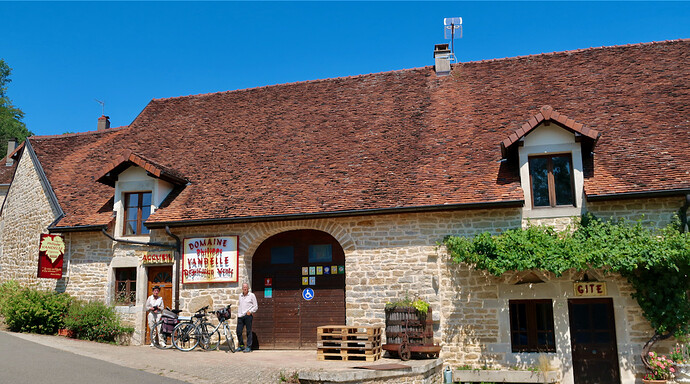 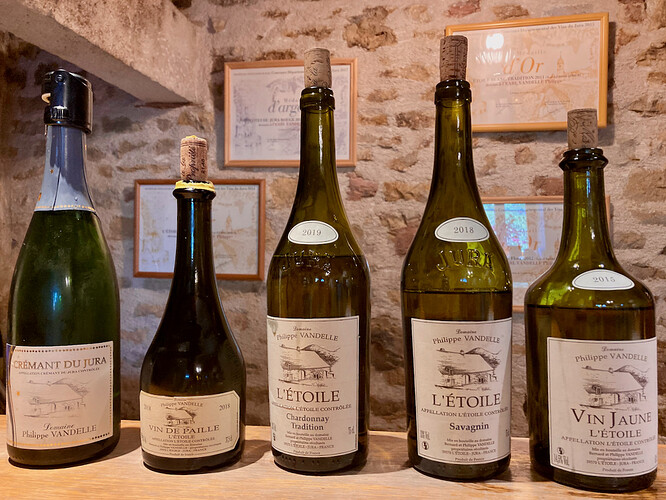 Next - lunch at the “Maison des Vins” which actually is just a classic French bistrot with a classic menu du Jour and packed to the rafters even on a Tuesday. Lucky we booked ahead; a German couple in a camper van were summarily ejected with"Complet" ringing in their ears. The wine list was only Vandelle or Montbourgeau which is as it should be 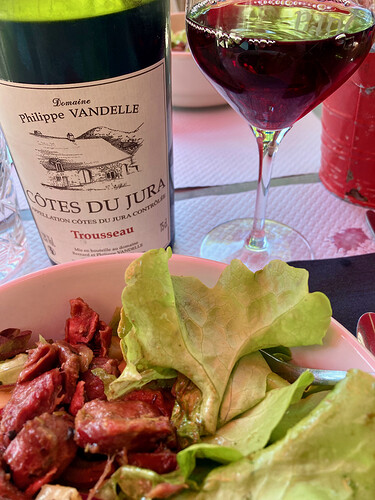 Finally a gaspy ascent to the other Vandelle property (the family split acrimoniously in 1883 but have since made it up…) Chateau de L’étoile, where here there zero dosage crémant and vin jaune were the stars. 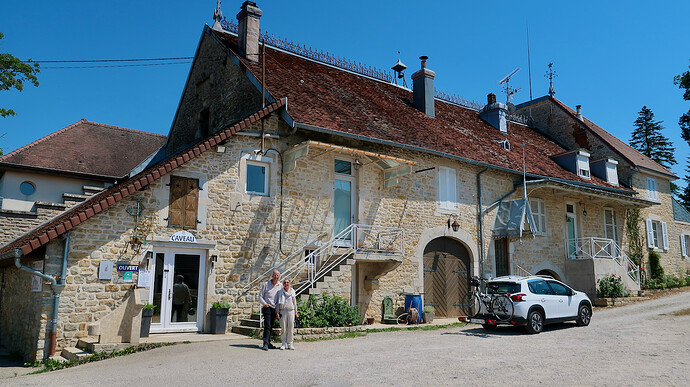 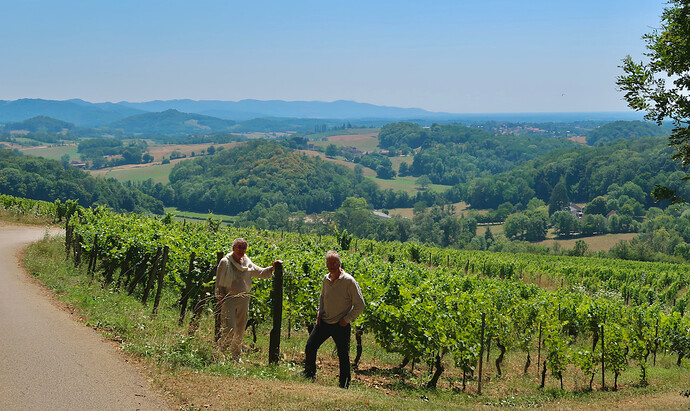 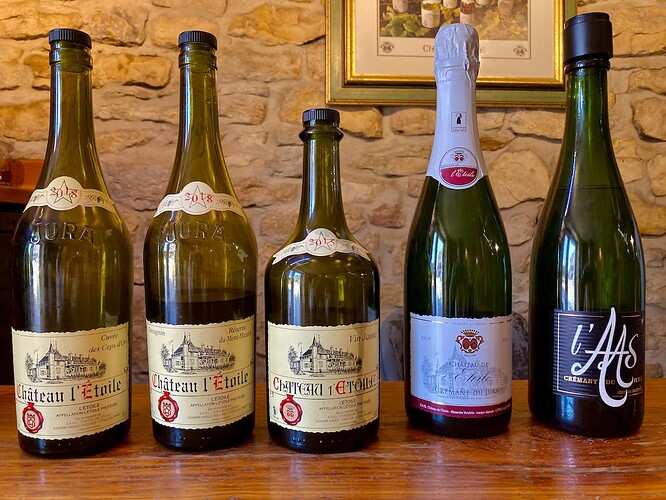 Wine of the day ? It has to be Montbourgeau’s Chardonnay “Montangis” cuvée, 2018. This is a classic Jura chardy from a parcelle planted in the 1930’s and created “sous viole” as if it was on its way to be a VJ. Almost like one of those Georgian amber wines in the flavour profile. Count Me In.

Tomorrow - north to Arbois and the home of Poulsard…

After 18,000 steps in a 41 degree Euro Disney with three kids we are back in our slightly cooler non air conditioned Gite holiday home. It was more manageable than anticipated. Drinking multiple litres per person of water helped.

Banked plenty of memories today, taking a gamble on some French supermarket wine whilst we are swapping stories from the day. Quite nice a bit chilled too (a bit chilled is all our fridge seems to muster) 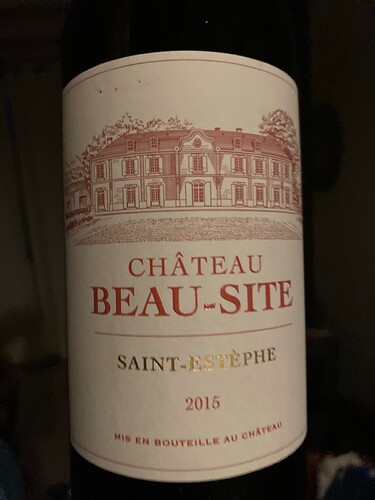 A small ramp at the edge of the pond (if feasible) or a cluster of rocks that hedgehogs can clamber up to make their escape can be really helpful. Hedgehogs are good swimmers but not very good climbers so they’re grateful for all the help they can get when they end up taking a plunge in a garden pond.

Not just a supermarket wine. I have bought it from TWS on the list and EP. One of my favourite mid prices St Estephes.

This is my first Taurasi and I’m really very impressed; so much more than I expected. I’ve had, and thoroughly enjoyed, quite a few aglianicos previously and generally found them light easy drinking sort of wines. Which, though enjoyable, don’t really hit my hot spot of strong robust reds. This, however, is really quite a serious wine. Lots of structure, but well balanced, the nose was quite meaty and savoury with a touch of tar. A slightly spicy blackcurrant palate and quite a long finish.

There is a comment on the site about it being a bit tannic and, whilst certainly there is a lot more tannin than any aglianico I’ve had before, I found it well balanced and a fine glass of wine.

If this is typical of Taurasi wine then I need more!

I have tried the Le Ralle and several other ‘del Vulture’ aglianicos which I was very taken with and on the back of that I did pick up a bottle of the Alvolo 2019 which is earmarked for drinking next year. I also picked up a bottle of Basilisco Aglianico del Vulture Superiore 2013 which is due to be opened sometime soon.

I certainly seem to be finding myself very partial to aglianico! There is so much to be discovered in Italy, even if I find Barolo as disappointing as I find Burgundy! 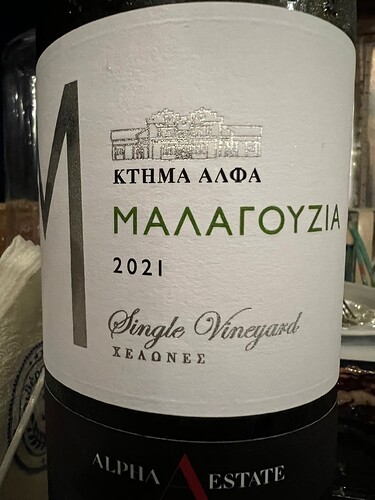 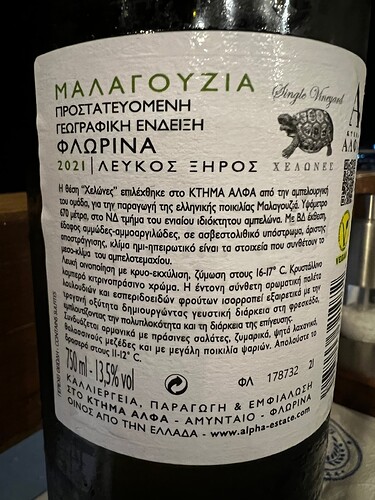 Not as good as the other two I’ve had so far. I’ll try another one tonight.

Enjoying a few days by the beach in Arcachon and very much enjoying the seafood and fizz (despite the smoke filled skies!). However we fancied some red last night and picked this up in a great local wine shop Cavavin.

This is my first Bandol and I’m extremely impressed. Rosehip, wild strawberry/wild cherry, pepper, rosemary on the nose. Very lifted with refreshing acidity and a long finish. Absolutely delicious and around £18.

Have also jusy enjoyed a glass of this on the eighth floor of the Cité du Vin in Bordeaux which, as many have said in other threads, is a fantastic visit!

There’s a branch in Sheffield ! I used to shop there regularly before joining TWS - as you might expect, an excellent range of (mostly) French wines including regions one rarely sees in the UK.

Brilliant thanks @lapin_rouge, I will check it out next time I’m in Sheffield