Tonight for the first time in a decade we’re drinking rose. So very modern.

Mourchon 2018 and quite lovely it is too. Nice fruit and good acidity. Mainly Grenache which I’d guess blind as Grenache blanc but with a slight strawberry edge.

We may drink more.

Sunday’s beef joint was big, so we finished it on Monday. I managed to find plenty of French beans hiding among their leaves to enjoy.

But the real star was 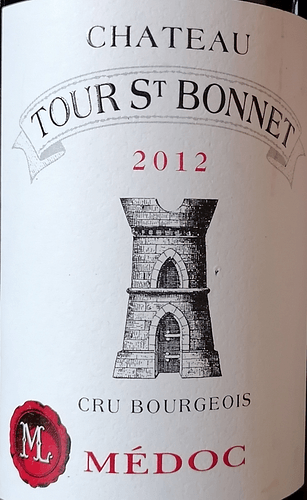 20200523_weekend-wines-5500×814 452 KB
2012 Château Tour St Bonnet (Bordeaux, Médoc)
This was the ninth of a case bought EP from TWS, and I’d last opened one in June, but this one stood out as just being right. Silky rounded and plumply fruited. Just perfect. I’m taking out of TWS storage my remaining vintages of St Bonnet (2014,15.16)as TWS says they are ‘now drinking’, and I’ll be drinking the remaining three bottles of 12 soon as it has now reached perfection.

Tuesday, penne with aubergine and tomato sauce and a side salad heavy with the glut of tomatoes from the garden - Sungold, Chocolate Cherry, Gardeners Delight & Tumbling Tom. 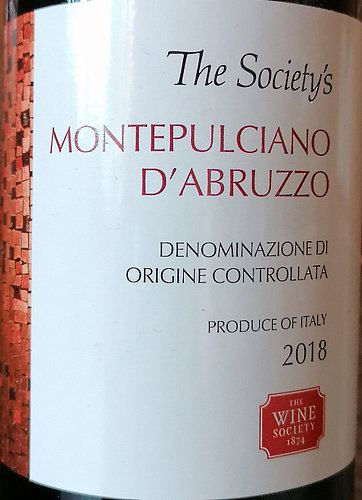 It’s a no-brainer, and such a friend to us and the food.

Wednesday I made a vegetable curry and since we have a lot of this wine I stuck a bottle in the fridge an hour before dinner, then opened and poured after 30 minutes so it was still cool on sitting down. 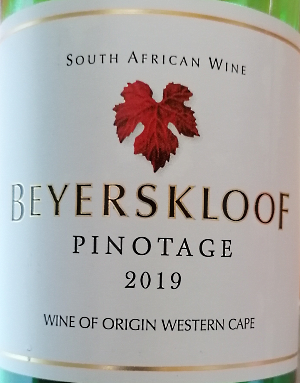 Another no-brainer, so quaffable and so good with spicy food.

(Later edit: Because of my cock-up on the ordering front we didn’t get the ingredients delivered today for the dinner planned for tonight, so I am going to make pizza.

We don’t have our normal pizza wine so Mrs M has decreed we will have ‘a decent sparkler’. I have chosen 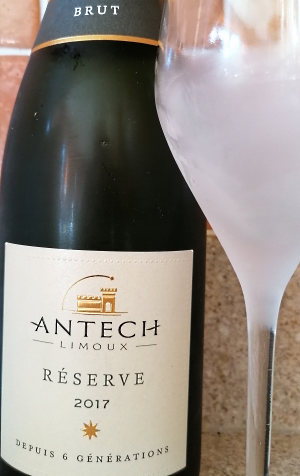 which Mrs M has graciously accepted as suitable… so I’m orf to make the dough and let it prove and to chill the fizz.

(as I go through the bags just delivered I find I’m missing another ingredient for next Monday’s dinner… but that’s a bridge to cross nearer the time.)

I’m taking out of TWS storage my remaining vintages of St Bonnet (2014,15.16)as TWS says they are ‘now drinking’, and I’ll be drinking the remaining three bottles of 12 soon as it has now reached perfection.

I am still drinking from a case of 2005’s, these are also still pretty perfect, so stored well they keep well. I agree Tour St Bonnet is very good VFM.

An enjoyable bottle of this to accompany last night’s Winemaker Zoom presentation.

An enjoyable hour where some of my cynicism around biodynamics may have been chipped away. Good fun that Joao, their viticulturist joined the Zoom whilst out in the vineyard on a beautiful kiwi morning. Cockerels crowing in the background added to the ambiance!

On the showing of the Leah, I may well be tempted to pick up a bottle of their flagship Sun & Moon when it arrives with the Autumn fine wine list.

I am still drinking from a case of 2005’s, these are also still pretty perfect, so stored well they keep well. I agree Tour St Bonnet is very good VFM.

I’ve been drinking Bonnet for decades now since I first started drinking red wine. I visited the vineyard and tasted the 2010 vintage from the tank. And bought two cases E.P.

Avgoustiatis 2016, Mercouri Now this is a lot better after the weedy mean Sourdais Chinon and the vile Hofbauer PB from yesterday. And i need it to cheer me up with the return of the usual depressing British weather. Mercouri are a very traditional Peloponnese producer, (their top wine is a blend of (mostly) Refosco and Mavrodaphne) and this is an “experimental” wine from a near-extinct lical variety. Dark in colour and bags of character, juicy and even slightly Musar-ish maybe? Not a wine for ageing, i don’t think, but delicious and different.

It is SO SO SO HUMID.

I have a glass of Lillet. It’s a bit stale as it’s been open too long and as the bottle says, it needs drinking fresh.

Last night we went out for dinner. Brunswick House in Vauxhall was the location. Ended up having a wine that TWS sell, as they have it on tap.
r

Tímea Éless is the woman behind this tiny-production, minimal-intervention winery, which was inherited from her grandfather in Hungary's Tokaj region. This furmint is dry, complex and pure with spicy orchard-fruit flavours. Delicious.

I’d already had a bottle of this. It’s a perfect wine for this stupid level humidity we have at the moment and the TWS description fits perfectly. It was a little bit warm on draft but a few minutes in the bucket and it worked a lot better. It worked surprisingly well as a match to my Pork Chop with grilled apricots and my partners gnocchi with feta, possibly due to the heat of the world right now.

The other interesting thing was the glass of Cava we had before hand (a NV Pago de Tharsys). I’ve been drinking so much Conde de Haro recently that I’d forgotten what most cava tastes like and how un-cava-y it is. It made a really nice change and part of me is regretting having just picked up another case of the CdH rather than going for something different for a change. I still love the CdH though! 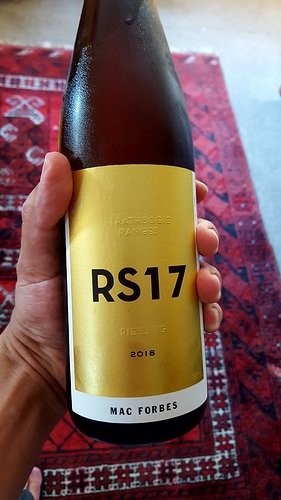 Love the Mercouri Estate Refosco/Mavrodaphne. Not had it for years!

Me neither, sadly! Had to check the grapes, though, and House of Wine.gr are selling it at a good price… . maybe we need a consortium!

Btw, no surprise to me the furmint worked with the meat. The second time i ate at the Ledbury chose a Szepsy wine,which the sommelier said would work with both fish and meat… and it did!

Also love this description of one wine "Red wine is so pleasant and easy-that it can be a nice habit. " The translations do take some getting used to!

Last night on holiday, rewarded with a rainbow following a gentle shower. 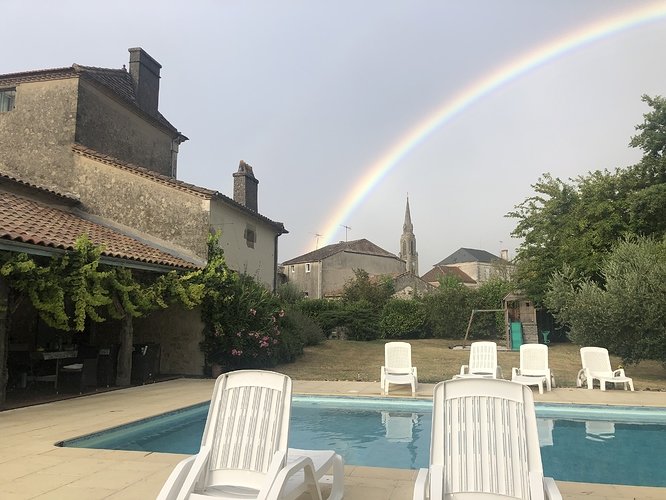 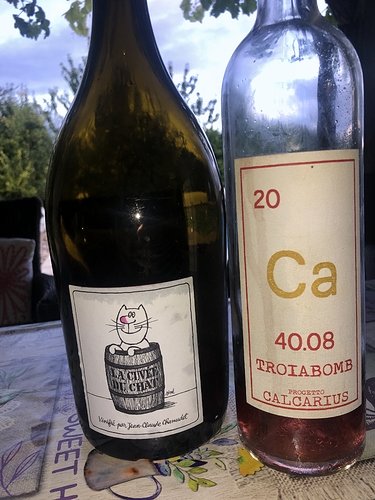 image3024×4032 2.87 MB
The very dark rose / very light red was great. Pretty sure it’s minimal sulphur approach - really zingy and zesty. The magnum was a Beaujolais of some sort. The kind lady in the wine shop threw it in as a freebie after we’d pestered her for nearly an hour. Was in the fridge for a couple of hours. Delicious and perfect with BBQd chicken.

Found half a bottle of this from Franck Breton in the fridge to wash down the remains of all the cheese - lovely. 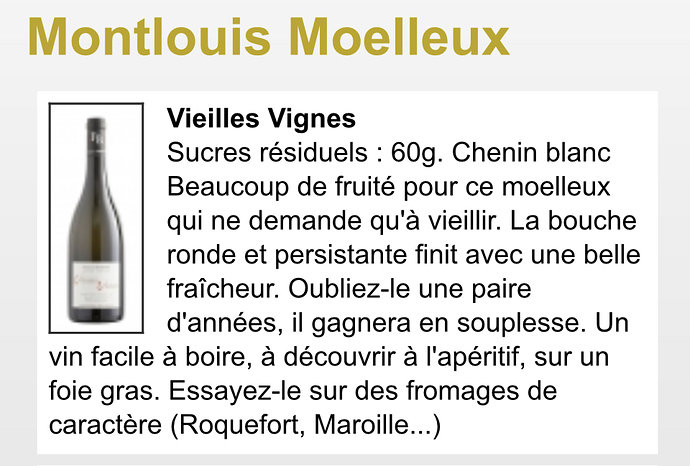 Finally just seen the news that France is added to the quarantine list from Saturday. Our Chunnel ticket is for 22:20 Friday, now going to be rather nervous until we’re on that train

Was it a bit sweet?

Our daughter is home, and requested “fancy fish cookery”. Mrs Robertd made another tomato and mozzarella starter, and I cooked pan-fried halibut with courgettes, samphire, clams and polenta. And we drank Rolly Gassmann riesling Pflaenzerreben 2011. 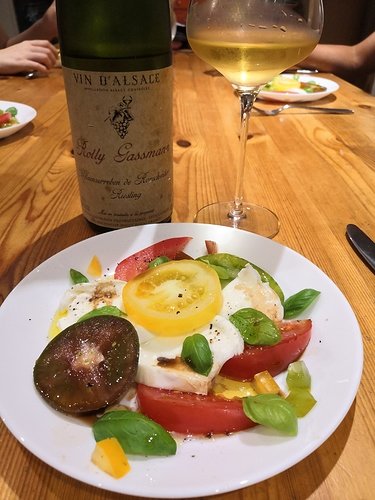 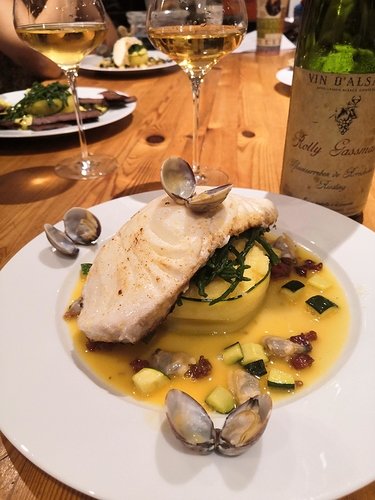 Very classy wine - a typical Rolly Gassmann balance between richness and acidity. A good whiff of kerosene but not overpowering, and without the bitterness that can accompany it; more grapefruit and ripe apples than lime. All too easy to drink.

Thanks. 8.5 hours driving to Calais according to Google. Mrs B still resisting a lunch stop!

You’ve got time for a British lunch stop, although possibly not a French one.

There’s nothing like eating a a Paul baguette and some random artisanal patisserie whilst driving at 130kph along an autoroute, to top off a french holiday.

Opened my first bottle of this last night:

Dark, sinewy and ripe-tasting gamay with explosive fruit flavours of blackberry, raspberry and dark cherry. Gamay here is grown on weathered granite, similar soils to those found in nearby Brouilly.


I found it to be a very good gamay with maybe a little more to it than the typical Beaujolais gamay, which would seem the obvious comparison. Very nice fruity easy drinker.
10 Likes
← previous page next page →