Haven’t started one of these for a while , but after not drinking anything all weekend I felt like something a bit fresh and bubbly . Enter Juvé & Camps reserva Cava !
Just lovely and just what I was after . Some great brown bruised apples, slight liquorice, a little spice & pepper with a decent finish.! I had some ratatouille & feta with it (thanks @robertd for the dinner inspiration!) and it was perfect!
(Just don’t forget your pliers to remove the staple 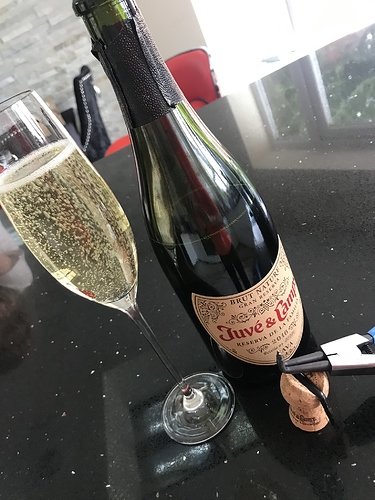 Out for a celebratory BYO at Hawkesmoor last night with this: 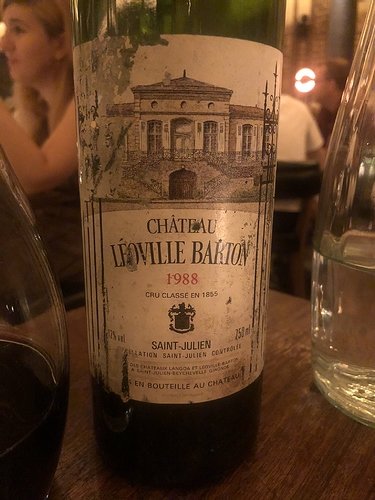 Still showing very well, little fruit mostly tertiary, but a fine example of mature claret in a somewhat under-rated vintage…probably starting to decline, but slowly and with plenty of drinking pleasure yet to give.

Over the weekend it was these - firstly on Saturday a bottle of this: 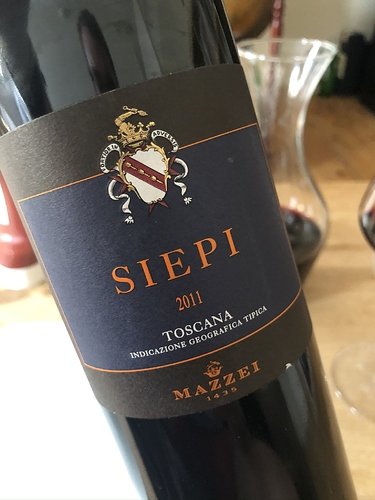 A Super-Tuscan blend of Sangiovese and Merlot, with the former certainly coming through stronger than the latter. Probably still on the young side, with plenty of primary fruit, and could probably have used a slightly longer decant, although the tanins were pretty well integrated and it was very pleasant to drink

On Sunday, this with Roast Chicken:

With 2010’s typically soft tannins, this rich and generous red Burgundy from the Vaucrain vineyard in Comblanchien, bought by Jadot in 1996, offers plenty of bang for your buck.

Definitely one of my favourite Cavas @Leah! Never disappoints

I only bought a couple of cases of 1988’s, Lynch-Bages and Ducru-Beaucaillou and sadly found them both a little disappointing with regard to the ability to soften over the years. Good foodie wines but not wines to savour on their own. An uncompromising vintage from my point of view.

I must admit this was the last of three bought at auction a few years ago, so didn’t really experience it in its youth, but at this point was not showing any hard edges, though I can see what you mean about being a more foodie wine!

Enjoyed this with Mushroom Risotto this evening , think it came from Majestic. Black cherry finish but rich and juicy , cool from the wine fridge and warmed up nicely for the evening 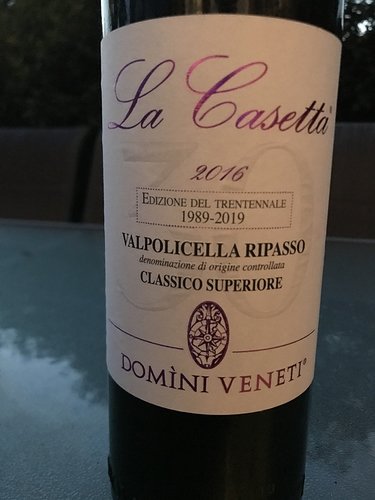 Yes, it’s a Majestic one and very nice too in my experience. On the Amarone side of Ripasso too, very ripe and full, and none the worse for that. Would be a good match for the mushroom risotto I reckon though how you are eating that in the heat you’re having beats me!

I had a case of Ch Gazin 88, which was really rather good, very opulently Pomerol. I have one bottle left…It was uncompromising on the other bank though - I had a St Estephe or two which I just gave up on in the end. Sold them via L&W brokerage and washed my face as they say.

My lovely wife decreed it was risotto night - mushrooms had to be used, late supper so not to bad. Back on the bbq tonight.

Just received cases of ch Trillol , a bit warm from the society van, straight into outdoor cooler, got down to pleasant 14/15 degrees. Super smooth best WS offer for ages £7.00 a summer steal. 1 down 23 to go. Git Dapper as we are apt to comment. 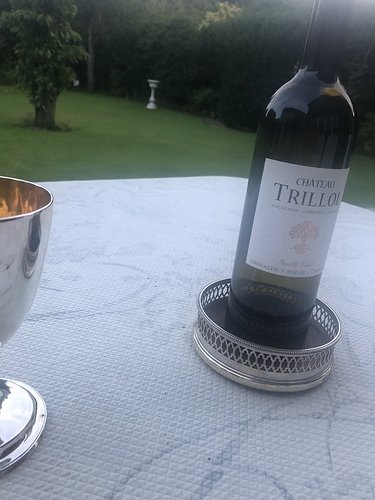 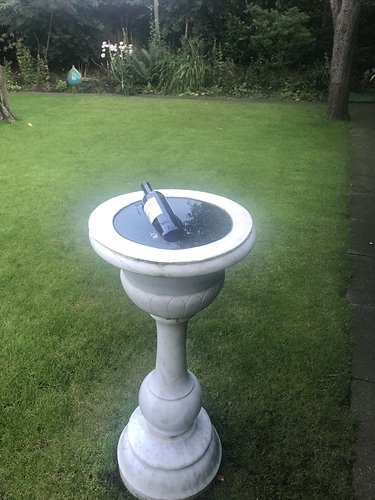 Weissburgunder Bergsatz 2009, Hofbauer Ok, so it’s an 11 year old Austrian Pinot Blanc. It’s not too old, though it is quite unpleasant in other ways, notably excess aromatics and alcohol way out of kilter (14:5%). Have to say i really hate this and am going to have to cook pad kra pow with piles of chillies and homegrown Thai basil tonight if I’m ever going to get it down

Drinking properly aged - by accident rather than design - NV Champagne in the garden (Tarlant Brut) I hadn’t realised that one issue would be the risk of the glass blowing away! 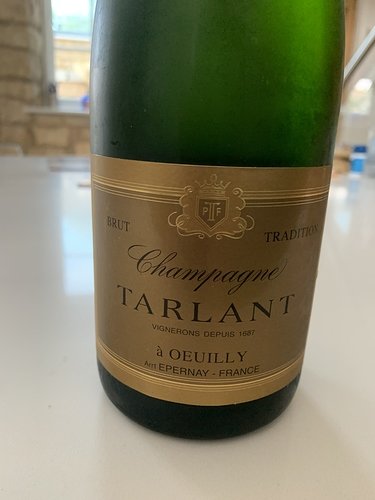 Yeasty, almost marmitey, character and bracing lemon acidity but quite austere in the finish - in a good way. Very informative back label 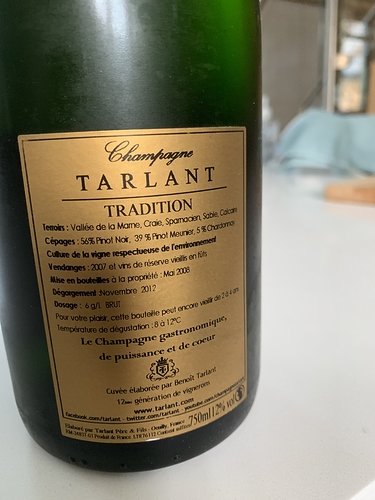 Alegria is a wonderful manzanilla, pale, aromatic and pungent yet delicate, fine and whistle-clean. Like all manzanilla, it is aged in Sanlúcar de Barrameda on the Atlantic coast where the protective flor yeast exerts a stronger influence on the wine, resulting in a pale colour and salty tang. The...

Glass of this with a few olives, too hot to eat a proper meal. This is our “house” sherry at the moment.

Pale and dry pink from the island of Corsica which has become a major source of good quality rosé. Made from cinsault and the local sciaccarellu grape, this is very clean and refreshing with hints of strawberry and redcurrant. Superb with charcuterie and seafood cooked Mediterranean style.

Lovely Corsican pink to help refresh and cool down in this torrid weather - all hail the Rosé!

We had this lovely Pinot over 2 evenings. With this unbearable heat it was a very nice red, flavourful without being heavy. Well made and with good fruit. Germany rules!

A finely grained red from Baden in southern Germany, and a true bargain for lovers of pinot noir (known here as spätburgunder). All sweet, ripe cherry flavours (including the pips!) and great length.

Just a quickie to say that this (house) chardonnay starred on a very hot evening with cold chicken salad. From Morrisons and often discounted to to £6.50. 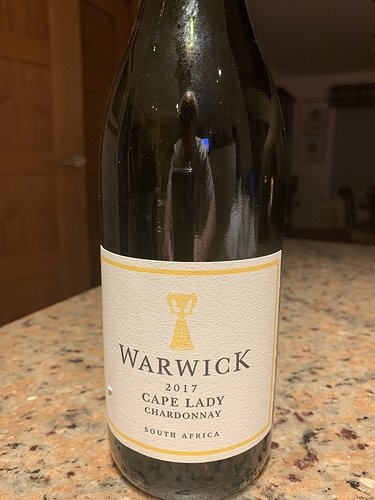 Chinon Le Logis de la Bouchardiere 2015, Serge et Bruno Sourdais This is rather thin and joyless, and a bit “muddy” too flavour-wise, though it does pick up a little with some time open. Fundamentally not a lot of fun, and light years away from the delicious Mabileau wine which costs more or less the same.

Still, at least it was better than the execrable Hofbauer