Well, the Season Of Novelty Booze is truly upon us, so I’ve decided to share this example, something I make every year. I can’t take credit: it came from the Waitrose Christmas Drinks Guide from a few years back, which I think in turn must have fallen out of a Decanter magazine or some such.

I’ve tried it with cookers and with eaters and as far as I could tell, the results were identical.

Also, not a vodka ‘expert’, but I don’t think posh vodka would make any difference, as long as it’s not the bottom-shelf stuff that tears your oesophagus a new one.

Now, bung it all in a large Kilner jar or similar. There might not quite be room for everything, depending on the apple size/quantity, so make sure they don’t crowd out the vodka.

I’ll let Wacko tell you what to do next:

The dairy element of the toffee should start to get things nice and cloudy.

Give it laldy for the first 24 hours, making sure that the toffee dissolves fully, then continue to shake it shake it baby every now and again, every day for at least five or six days; I usually keep it in there a week.

Finally, sieve into bottles. I strained it through muslin once but to be honest it took forever and was a bit overkill really. There’s always gonna be a bit of gunge that settles on top, but just shake before serving to make sure that everyone gets a bit of the good stuff.

Once it’s taken on the sugar and toffee, it works out at slightly more than a litre but that’s fine: I fill a restoppable litre bottle, and the rest is, you know, to test it out, make sure it works properly

Waitrose mag suggests mixing it with ginger ale or apple juice, but really it’s mighty smooth on its own, and we have it either on the rocks or solo in the frozen granite shot glasses someone gave us as a present a few years back.

Oh MY GOD!!! Yes! Thank you @Herbster! This is getting made and putting in some hampers I’m putting together !! FANtastic ! I’ll post my pics once I actually do make it

I decided to give this a go, but my nearest shop had no toffee and I didn’t fancy sacrificing a pan to make my own. Undeterred, I forged ahead using Werther’s Originals instead.

What could possibly go wrong? 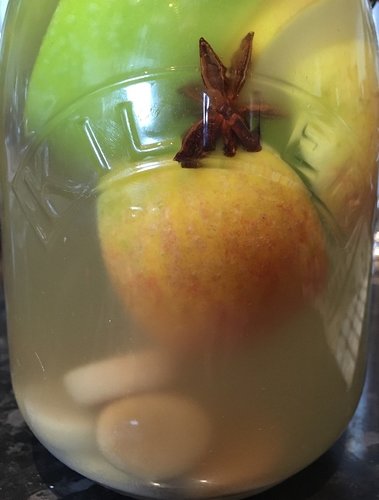 Sounds good, why not!

What toffee did you use ??

Usually just supermarket own brand - I figure any posh toffee’s benefits would be lost in among the other ingredients…! 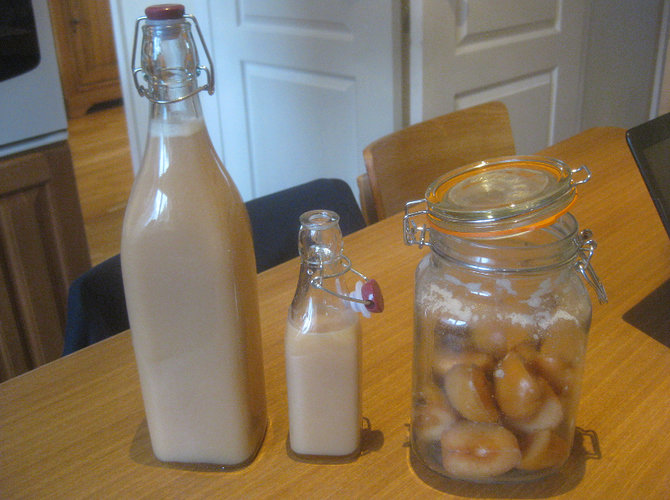 Wow! Looks fantastic, and befitting a holiday centred around booze (let’s face it!)… what will you be doing with them apples…?!

got to be a tarte tatin…

I considered the garden compost but wasn’t sure if I’d be inflicting long-term health problems on the lovely invertebrates working their magic therein. So I just binned them.

Ha ha! It’s not a beautiful colour, for sure, but this batch is strictly for home consumption.

My parents once made apple wine and tipped the residual apple solids out into the garden. What followed was a week long party of paralytic pigeons. Will always remember watching them falling of the fence and shed

Never seemed to do them any harm and they were back every day until it was gone.

Similarly, I seem to remember a footage of Chimpanzees getting drunk of fermented windfall apples… being so similar to us in mannerisms, it actually did look like a Friday night on West Street, Brighton. Frightening! 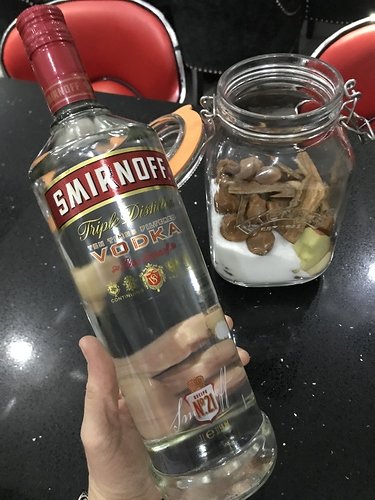 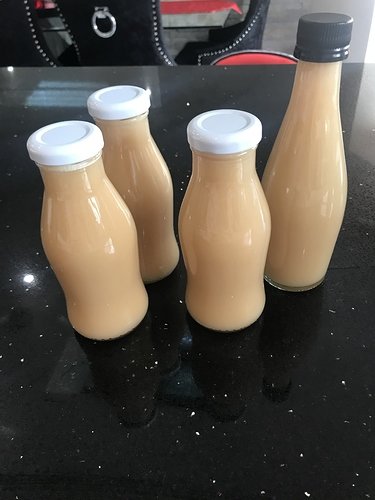 My Werther’s Original apple vodka doesn’t have anywhere near the depth of colour as your very handsome bottles, but it does taste pretty good.