No I’m more likely wrong as I don’t use reserves except occasionally as a temporary holding place.

“I rather drop one or two of the wines and substitute with my own choices and, as doing exactly that is rarely much more expensive, I’m afraid that’s what I usually do.”

Exactly. And while I like all the comparison suggestions, I can do this for myself and look for tastings which do it. For me, mixed cases are really only useful for ideas of what to buy, not for actual purchase.

But I think mixed cases are more for people who don’t yet know what they don’t like and for people without access to tasting groups to put together comparisons, verticals, etc.

I don’t think it is right for some wines to be only available in a mixed case: if I don’t want the others, why should I be forced into taking them? If TWS has over-bought a wine, put it on offer or in a mystery case. If we could buy individual wines EP there would be no need for this way of selling the most popular.

I used to buy more mixed cases, and still do so from time to time (especially EP for certain regions or producers). They were attractive when I was exploring, or just wanted a convenient way of filling the rack with everyday wines, with a few new ones to try. But I seem to recall that there was always a bit of an incentive - ie a discount. These days that doesn’t seem to happen very often, so indeed you might as well make up your own case.

Yes, it doesn’t happen very often, but I couldn’t resist the Au Bon Climat case recently and going back a bit, the Naoussa case was so tempting I bought 2 of them.

there’s generally little or no saving by buying the case rather than individually.

For my “interesting contrasts” cases, the saving would be in the time of the purchaser figuring out what would work. Also, TWS will have actually tasted the wines beforehand, so should do a better job.

Otherwise I agree that mixed cases are rarely worthwhile for me, though sometimes they include wines not available separately. Often I msy be tempted, but then discover they contain a few wines I’m not interested in.

Where can I order a case each of the above please? Seriously.

TWS has some unique positioning and differentiators in the market.

I’d want a perfect mixed case to reflect that.

Some very brilliant mixed case suggestions so far, thank you all - will pass all your suggestions along!

Having thought more about this question, and referred to my TWS “The List” I’ve come up with a suggested European sampler case:-

As you can see the idea is a typical grape for each country and in most cases there is an obvious bottle in “The List”.

I haven’t tried to get a certain number of whites or reds, that would be a later iteration.

On the subject of verticals, and again thinking about tastings and personal education, I think it would be nice if the vertical cases could cover vintages with a greater chronological range. Many vertical cases offered are IMO less interesting, as all the vintages are so recent. They may reflect vintage quality variation, but show little about the wines evolution with time.

I realise there may be some practical difficulties, and it might help if less grand wines that evolve quicker might involved, for example Cru Bourgeois Clarets, which still show evolution. I wouldn’t mind if one or two wines were arguably too old. Another cheaper wine, which IMO shows beautiful evolution is German Kabinett Riesling.

Yeah I quite agree on how ranging it really opens one’s eyes on what can be the difference. Here was a great example in that regard Domaine Perdiguier Vertical case

I didn’t bite on this one (which is rare for me). Just too much wine that needs drinking now!

I would imagine that the TWS buyers have sufficient relationships with established winemakers (like KPK) across the major wine-buying regions who would be able to come up with a pretty sweet shortlist.

I would also hope that given the relative anonymity of the winemakers, the value for members purchasing the case would be excellent too. Any big successes could then be considered for a more regular purchasing arrangement. Win win?

I wonder who this ‘Wine Specialist / Wine Advisor’ is?
Whoever it is, they’ve charged an additional £1.20 for their services.

This was the wine specialist team announced back in May 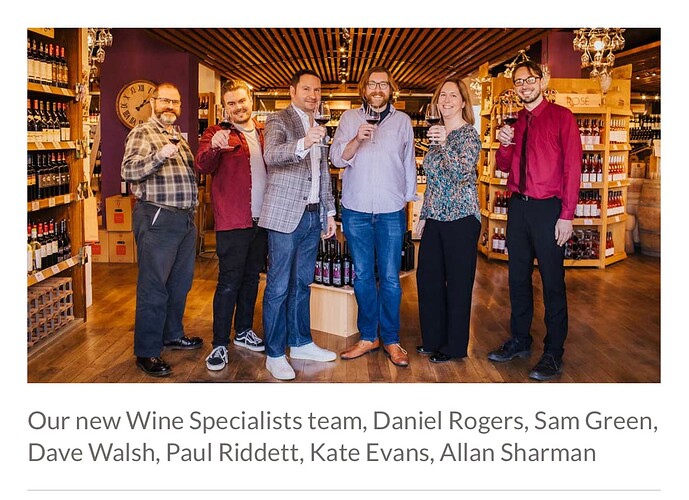 How about a ‘Member’ curated case every quarter? @Inbar and @Kidman have already made suggestions? We could get their suggestions along with their reasons and their tasting notes. Perhaps if it could include 4 red, 4 red and 4 others (fizz, rose, sherry) and then those of us who like to pick can choose 6 bottles from the set (e.g. red plus sherry)

With an upcoming World Cup, something themed on some of the countries that have qualified might have some legs?