It really is an exciting listing. And one which gave me a lot of soul-searching before jumping in for a case of 6 late last night when I noticed the dreaded “Low Stock” warning. That’s my wine budget gone for some time now.

I’ve never tasted this one, but do remember having some lovely Liatiko back in the day, often chilled [not that you’d want to chill this one, I’d imagine]. Almost like drinking Spring-sunshine incense with some of them, and very memorable for sure. If this one wasn’t a 2015 though - the birth year of our boy - I don’t think I’d have pushed my little boat out so far.

When someone gets round to opening one, some thoughts would be wonderful to read!

when I noticed the dreaded “Low Stock” warning

That (and a tax rebate) also prompted me to try a bottle (of the Mirabello, Economou 2015). Any thoughts on when to drink much appreciated.

Now out of stock but other merchants have it at £55.

I too, as ever was tempted to go for a bottle or two of the now OOS Mirabello. It was still “low stock” pre covid booster jab appointment and 40 mins later, gone, which I half expected and a part of me was willing me not to spend more money on wine! One thing that struck me as curious is why the cases were 12 bottles and not 6, or 3. Off the beaten track grapes, region (relatively) and a punchy price. The wine does sound fantastic though.

I too look forward to reading people’s tasting notes.

@horsleym - any thoughts Matthew on when these 2015 Mirabello might be at their best / when open for business anyway?

And related, what can we expect broadly? I’m more familiar with the cheap & cheerful end of Liatiko that you’d more likely drink chilled etc. I did have one or two “big” Liatikos many moons ago but can’t really remember much about them beyond them being exceedingly lovely!

I think there’s an important point to note here. I’m sure there may have been some scepticism when the idea of expensive Greek wines was floated, but it would seem that the three most recently added expensive ones have gone first. I would say as a litmus test for future offers, that’s a result (both for us and TWS).

Well, I passed on the Economou, partly because I’m slightly afraid of diminishing the memory of the Sitia red (when as far as I know there were Sitia red and white and a cheaper red just labelled Liatiko) when it was relatively affordable. I’m not sure about the Mirabello - a quick Google when I was considering buying it suggested that it was the result of the purchase of new vineyards, and the first vintage - the Sitia was released when it was genuinely ready to drink (even to my taste), so if this is on the same principle I would think you can safely try one straight away. Again, the new wine has (I think - I’m not sure how much I knew about the Sitia when I was drinking it) substantially mode Mandilari, but the old one always seemed to me most like good Barolo and was like no other Liatiko I’ve ever had.

Hi @crocos, I think it’s ready to go now and there’s plenty to enjoy (especially on the nose) but still quite a lot of tannin which some may struggle with at this early stage. Decanting for a few hours prior to serving i’m sure would help.

In terms of style/what to expect it’s a totally different wine to the lighter, delicate liatikos which you might have tried (such as the Kompsos which we’ve stocked over the last few years) that I treat a little like mencia or Beaujolais. This is much more powerful, tannic and savoury - somewhere between a serious southern Italian red like a Taurasi or older Graticcaia and Ch Musar.

Thank you very much for this, @horsleym - appreciated. Although I’m a Musar virgin - shock horror; not many of us around on this community I suspect - I’m a big fan of Taurasi & Graticcaia; so it would seem my frankly rather scary punt-in-the-dark on these will very likely be worth it.

Re the tannins etc, I will probably be sitting on most of these for a while yet anyway and waiting until our boy’s old enough to try wine from his birth-year / family celebrations around same :~}

I’ve finally placed a box of the Xinomavros into reserves, but they probably won’t be there very long. I’m wondering which I should open first, would you be able to give us an idea as to the wines’ approachability? thanks

All are drinking well now tbh but personally I’d crack open the Hedgehog first - it’s a super charming, fruity, spicy wine. No need to decant, just lightly chill. The others are a bit more tannic/savoury and likely need food and a bit of a decant first.

Thanks very much. I’m sure I can find a willing volunteer or two to assist with some measured appreciation

I’m currently eeking out the last dregs of an Alpha Barba Yannis Xinomavro 2016 opened on Sunday and it’s still showing extremely well. The acidity was pretty bracing on Sunday and needed food for my tastes, but it’s smoothed out beautifully since. I don’t want to finish the last drop. 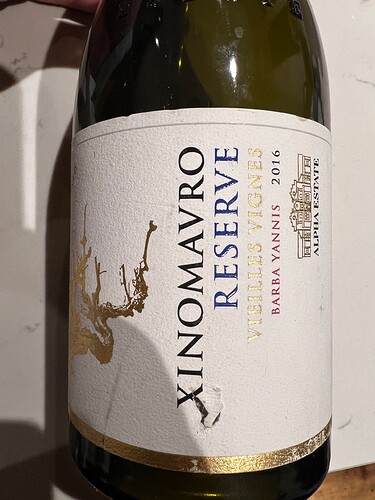 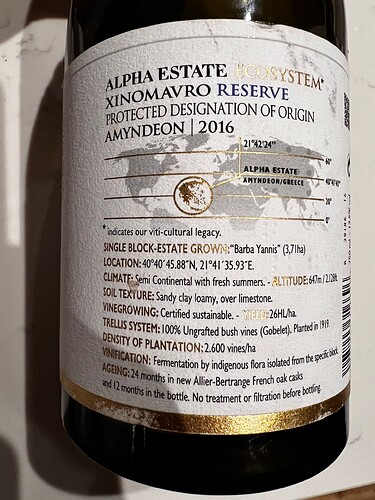 Does anyone here know about “pithari”? They are large clay jars found in Cyprus, and seem now to be largely abandoned or used as ornaments. They were apparently used to store oil or wine. But all the info I can find is very sketchy. I was wondering if they were ever used for fermenting wine for example?

Perhaps someone has come across them in Cyprus and asked? @PHarvey?

I forgot to ask last time, does this have a lot of life left in it? I’ve got three sat in the cellar and I’m procrastinating on when to open one. My assumption, based on literally no evidence whatsoever (okay, maybe a snippet that Amyndeo is high elevation/high acidity?), was that it would last years.

Yes we saw them a few times but as you say mainly as props or items in the winery’s museum.

But there was one winery still using them, Santa Irene. https://www.santairenewinery.com/family-legacy/ - fermentation had finished in late September and they had been capped off. He has had bespoke steel lids with integral airlocks made to fit each one, hence the numbered annotations. 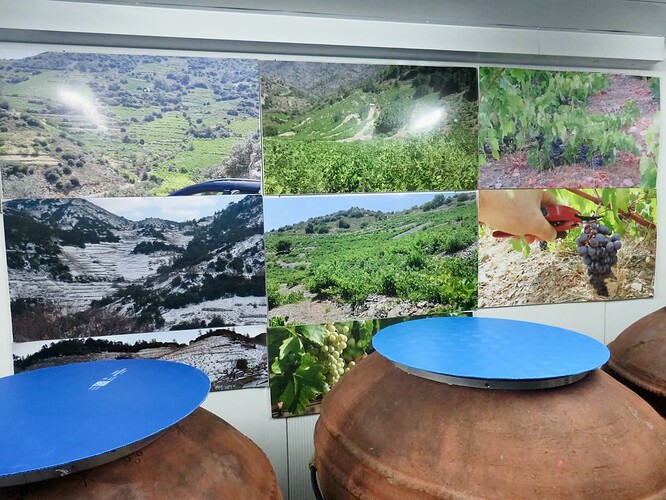 We saw them as legacy items at Agya Mavri Our story – Agia Mavri Winery and at Karseras KARSERAS WINERY – wine.com.cy which only makes
Commanderia. At the former there was one which had the mill used to crush the grapes on top still on display. 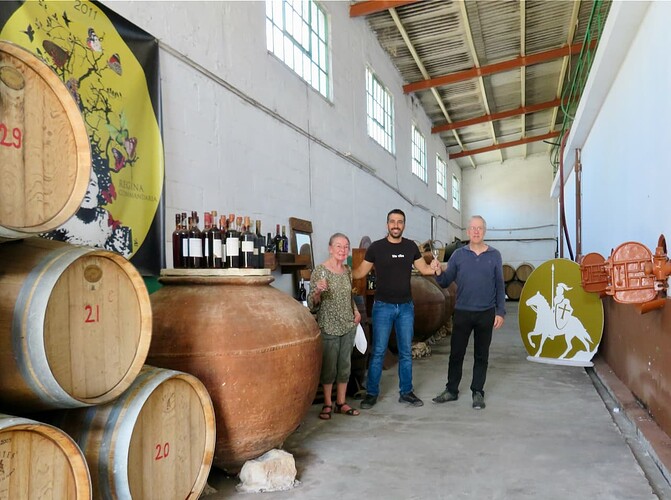 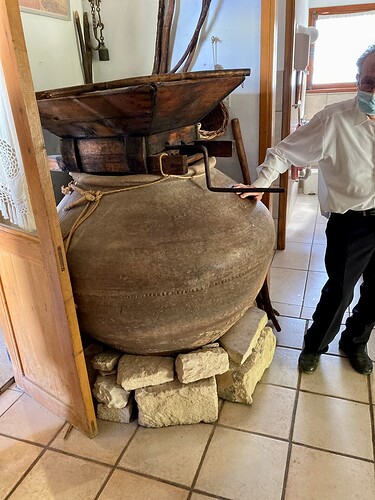 It will. No worries there at all, based on that single bottle. I have one left that I’m in no hurry to open.

Did you try their Tannat yet that I seem to remember you purchasing?

No, same thing. No idea when to open it. Frightened it’s going to be a monster (again, my gut tells me it’ll have ferocious tannins and acidity from such high elevation. They may be completely unfounded of course).

From your images, and also from the Santa Irene website, it seems clear that they were never completely buried, but probably originally just had the pointy bottom stuck into the earth, and now stand in racks.

Again on their website, the crusher on the abandoned pithari of Santa Irene suggests that they were used for fermentation (as they are now), yet the same website also refers to them as storage jars. Maybe there never was a well-defined practice, and they were just used as farms saw fit?

So I’m still not sure about their historical use, but it’s certainly clearer to me than it was.

He was definitely using them to ferment his wines, (though he had enox tanks as well) and in another room there were a few with the airlocks fitted still - and I can’t explain why I didn’t photograph them ! Like Queirolo’s bottejas in Peru, he’s been travelling around the island buying up old pitharis to get them back in production.

But if you plough through the wines on offer on the website - all are fermented in enox and so I guess the wines he makes in the pitharis are low volume / experimental / cellar door only / only started recently and still maturing in bottle ? I can’t remember the details I’m sorry but they were an amiable bunch and I would anticipate a helpful reply to any enquiry you may send them. (no problems with English on Cyprus…)

He was definitely using them to ferment his wines

Understood. I was wondering more about historical practice though, given that they were referred to as storage jars

Hi @horsleym
I feel I haven’t bought enough of the Dalamara wines a few months back and was wondering if they will reappear before Christmas ?
Any indication if there’s a new batch or vintage coming soon?