Sweetcorn is hit and miss here even so don’t worry ! the stuff in the fields is maize for cattle fodder so a very different variety to the “sweet” stuff

Great looking planters and a decent size. I would add a few things - Dwarf French beans are even easier than climbing ones. As long as they are sowed after early June into warm soil, they are foolproof - a bit of watering when it’s hot is all the work needed. Long shallots are useful in the kitchen, easily planted around now and no effort as well as being very productive. Herbs like Dill and Tarragon are good as well as chillies if you have some cover.

Here’s a selection of this years… 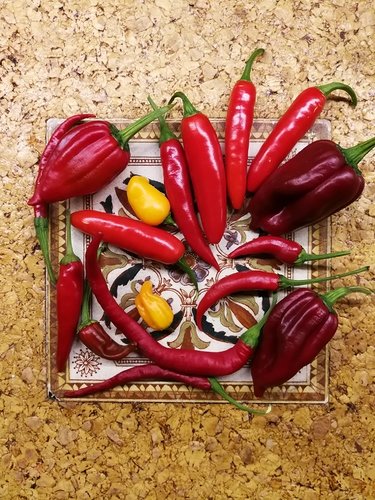 Lots of these have been used in a smoky, spicy and delicious chilli and tomato relish - in three heat levels.

Thanks - they are 2.1x 0.9 m (ie length of a decking plank! Very easy to make in all honesty - problem I have is our house is a converted farm and my back garden was part of the cattle drove so has about 6 inches of soil before you hit rubble / concrete…hence the need to build up

I do grow shallots (forgot to add to the list!) - they are so easy to grow

Sadly I’m the only one who eats French beans (even then not a lot) so they would be wasted but agree, they are relatively easy once they have got going

We are still using last years glut of chillies so I didn’t grow any this year - what varieties did you have ?

What variety are the large dark ones on the right?

I usually grow chillies in pots so they can come indoors between now and November. They then brighten up the dreadful depressing days of November, and will usually overwinter. No idea what varieties I grow - they’re mostly picked from plants in Guatemala and Kenya. No idea how to upload a pic here, sadly

Re Chilli photo: The larger, sort of pepper shaped, ridged and with a pointy end ones are Ancho Poblano; quite mild really, but tasty. The longest, curled ones, about 5" long are Turkish Aci Sivri - again, fairly mild / bit of heat with the seeds in. Very productive - probably 20 or 30 off each plant.

The very thin, medium longish red ones are, on the other hand, pretty hot! Not inedible, but with seeds and inside pith removed, they have a good kick to them; these are Indian Teja chillies and about 50,000 Scoville’s.

The yellow, scrunched up ones are Datil Yellow, a hot chilli from Florida. These are super fruity and quite different from the red ones in terms of flavour. Pretty damn hot though!
All relatively easily grown and quite cheap at about 18p per seed; good return, even allowing for the early heat required in March and April.

that’s a good idea - might try that for next year, thanks !

as for pics…very easy…when you write a reply there are the icons above the text box - 6th from the right is attach a pic, simply follow the instructions to either add from your device (choose the file) or from the web, then upload