Pretty much the standard with Barolo Chinato replacing vermouth; 50ml apiece of gin, chinato and campari stirred on ice and served in a tumbler with a large ice cube and a slice of orange. I sometimes add Bob’s bitters orange & mandarin. Depending on your mood, 2:1:1 ratio (gin, vermouth/chinato, campari) can be more refreshing.

Pretty much the standard with Barolo Chinato replacing vermouth; 50ml apiece of gin, chinato and campari stirred on ice and served in a tumbler with a large ice cube and a slice of orange.

Sounds delicious, is the Chinato easy to get hold of over here?

Thank god you don’t make a Negroni like Stanley Tucci. I was weeping throughout his entire Instagram video.

I just had to google this. Despicable!

That is not a negroni. To paraphrase my spanish friends talking about variations on paella, it is “gin with things”!

Thank you, I’ll give it a try. I seem to find my negroni’s a rather blunt instrument whereas the good one’s I have had are gentler.

If looking for subtle (well as subtle as a negroni gets), I would try 2:1:1 tanqueray 10 :antica formula: campari

Do try Chinato on a side by side basis, I do think it does well in this drink.

Or feel free to swap in vodka?

cocktail people are particularly bad at this. I’ve had some utter abominations served as French 75s. This is particularly bad. A friend of mine ordered it (mostly to troll me) and described it as an alcopop.

Is it gin and vermouth? no? It’s not a Martini then, is it?

I think it boils down to people liking the idea of these drinks but wanting much milder/sweeter concoctions than they actually are.

That said, I do occasionally like a dash of Fino in my Negroni. Classic 1:1:1 Beefeater, Martini Rosso, Campari and then another part Fino. I also occasionally age negroni using the same (minus the fino) recipe.

Shocking lack of respect isn’t it!

I wonder if bars do this somewhat so they can sell more, two proper martinis or negronis should be plenty - which probably isn’t good for margins!

Anything with too much “mixer” in it isn’t really a cocktail in my view - they should be cold & very strong!

How does the aged negroni come out?

Anything with too much “mixer” in it isn’t really a cocktail in my view - they should be cold & very strong!

As well as the negroni’s I’ve been on a slight tiki kick recently, so one of my mixers of choice is less strong rum.

The aged Negroni mellows out a bit (but not in a bad way) and becomes a bit syrupier in consistency, I tend to serve it straight from the freezer rather than over ice which accentuates the viscosity.

We need a cocktail thread! How do the threads get split out, is that a @Mentor thing?

Combine it with the threads on what to watch and you can enjoy the Frick series Cocktails with a Curator:

Cocktails with a Curator | The Frick Collection

Enjoy all sixty-five episodes of the Frick’s critically acclaimed, award-winning 2020–21 series Cocktails with a Curator. In each episode, a Frick curator offers insights on a work of art in the

15 minutes on a picture plus a cocktail recipe.

Tiki cocktails are generally very easy to make delicious as long as you stick slightly close to the formula. I work from a basic daiquiri recipe of 3 parts rum, 2 parts lime juice, 1 part something sweet (sugar syrup for the traditional daiquiri) and play from there usually.

My current favourite is something reasonably similar to a Zombie. I don’t have any apricot brandy so I’ve been using maraschino as the sweet and an absinth rinse. I am mostly using Plantation Pineapple Rum (which makes up for the lack of pineapple juice, and is what I happen to have in) along with some Bacardi 151 floated on top (and set fire to, should you feel the need to the extra kitsch!).

Also should point out that I am 100% here for the extra kitsch.

This thread reminds me of the joke:
An Englishman goes into a bar in Glasgow. He goes up to the bar and asks for a lager top.
The whole of the bar goes quiet.
The barman stares at him and says: “We dinnae do cocktails, pal!”

Tomorrow is Tequila Sunday for us, I’ve got a bottle of Don Julio blanco that will be both sipped (along side some sangrita or verdita) as well as made into margaritas (chilled, straight up).

Carnitas tacos on the menu… 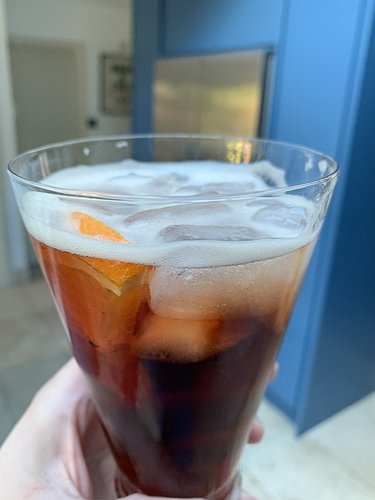 A sort of Catalan Americano - one part Campari, one part Vermut Negre and one part Mediterranean tonic water, slice of orange.

Big fan of fan of the Dolin Vermouth sold by TWS…mixed with gin ( Absolut for my other half) slice of orange and poured over ice . Campari or bitters to taste. 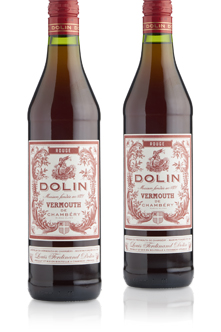 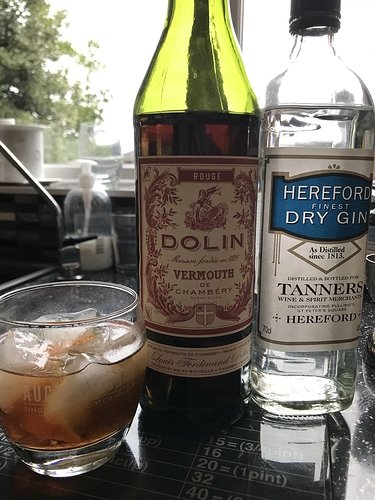 Dolin from you know who and off we go perfect for a blustery cool evening.