Took me a little while to register the size of that bottle! Enjoy your Crozes

Was that a gift purchase? Many of these are gift-boxed…for a price!

That is the Jeroboam currently on sale as part of TWS Christmas fine wine list (the box to the right is a standard TWS 6 bottle wine box for scale!). I assume this is just how it is shipped as the box is a Jaboulet box with the size and bottle details printed on it, as well as the Jaboulet name and crest.

It isn’t at all clear on the website, but it is the double magnum (300cl) sized Jeroboam. Arguably not the most efficient way of buying the wine, but by paying only one £5 corkage fee you (almost) make up the difference…plus you get the effect of walking in with a Jeroboam!

I completely understand and approve of your motives. Was just curious as to the actual size.

I am drinking a bottle of the 2014 tonight. It’s nice. However the 2016 I had a while back can only make it out as a distant speck in the rear view mirror by comparison.

And yes they are both too young, but quality will out.

Wow! 175 bottles of one wine. That has drawn me out of my silence on this forum.

It does sound a lot now I put it down ‘on paper’. But this is mainly me buying 12 bottles every year EP since 2005, plus a few older vintages where I can get my mits on them (including the 1990 when in stock at TWS which almost exploded my bank account). I just eed to start drinking.

Never actually had it, but would love to do a comparison. Maybe I sholud look for some 2015 as I hve some Maison Blue from that year, and if I can save up to add a bottle of La Chappelle to the mix I can do a horizontal (I will certainly be that after four bottles) in about 10 years’ time!

Are these still on? If so, 1/2 bottle of each then back for more of your fave!

I very rarely buy magnums as I never really have an occasion for them, so even larger formats are right out. I based 175 on what cellartracker tells me so I assume it would be 1 bottle there, which seems about right to me.

Anyway, I think the next step for me is to bite the bullet and draw down 3/ea of 05-12, make some notes and report back.

Anyway, I think the next step for me is to bite the bullet and draw down 3/ea of 05-12, make some notes and report back.

Sounds amazing, let us know if you need any assistance

In relative terms perhaps. I was thinking about northern Rhone vintages the other evening as one sometimes does, and thought to myself there hasn’t really been a duff one for at least a decade ( perhaps 2008 ). Not like the 80’s when maybe every other vintage left something to be desired !

So? Can we have an update please?
I’m dying to know if you’ve cracked the perfect year / ageing combination…

Well… I’m attempting dry January so no updates for the moment. Crazy I know! I might draw them out soon just to look

I might draw them out soon just to look

Now there’s a test of willpower

And compare the change in labels of course. 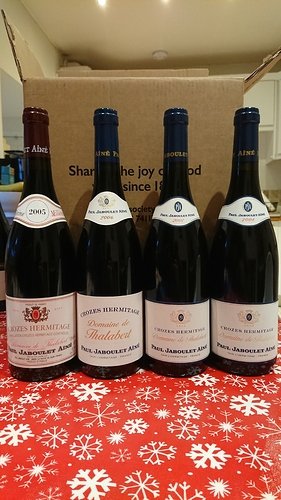 Mature northern Rhône syrah in a very ripe vintage. This is full flavoured and gamey. Decant before serving and enjoy with pheasant.

I bought the Thalabert in 2009 and was/am in no rush, despite the warnings the TWS reserves drinking window told me. This is bottle 7/12 and the previous one tasted so ripe, fresh and alive that blind it could have been mistaken for half its age. I’ve never tasted a Roure so didn’t know what to expect but assumed a certain similarity.

Tasted as blind as could be, having shoved them in a box this morning and no idea which was which, I plonked them down facing away - no back label makes this easier. First in ISO tasting glases, then in some Riedel magnums.

I won’t bore you with my full notes, but it was surprising how different the nose was. I guessed the Thalabert immediately for the strong bacon jam smell, whereas the Roure had a much more muted, softer and darker nose.

Roure was more morello cherry, plum pie, black olive and soft fruit, but the finish was shorter and ultimately a bit blander to my taste. Still, some cake fruit lingers if I leave the Thalabert alone long enough not to influence too much.

It’s hard to be objective when I’ve obviously invested so much in one side, and I’m mindful of a quote I saw on this forum about ‘no great wines, only great bottles’ - which rings true when I compare #6 to the others in this case. I’d love to do this same tasting with a more recent vintage, too.

Nevertheless, on this showing I’m still on team Thalabert, which is good because its cheaper. The Roure might be said to have aged more gracefully, but while it prefers M&S flannel pyjamas in its dotage, the Thalabert struts confidently in Liberty print, sacrificing the heating budget in favour of living life to the full while it still can. 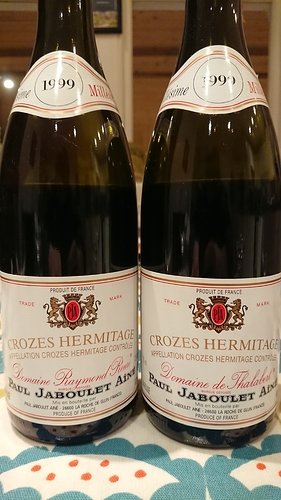 Great tasting notes. Thanks for sharing

Aw Great notes thanks for sharing.
I’m a big fan of the Thalabert 99, having tasted then brought a case. The roure I only have 2000 and 1998, a couple of bottles of each. When I’ve tasted the roure it was not in the same class or showing the longevity of the Thalabert. I wonder if it’s a vintage thing but now your notes show maybe it a wine style thing.
i think that the Thalabert vineyard may have been passed on to the original Jaboulet family as part of the sale to the Frey’s in early 2000s but that the Roure vineyards passed intact.
I wonder if these 1999s Thalabert are the last great vintage from this intact vineyard or if the new wines will be a worthy replacement.

A bit of air has done them good.

Roure lovely. Soft. Classy. But still a little dull. A gold medal winner but so what. Dependable. Charmant.

@Russ I’m sure vintage plays a part - I remember the 98 Thalaberts I had being somewhat ‘hard’, but these are such different wines. Perhaps a taste thing, and I love a savoury syrah.

I look forward to tasting the more recent vintages, but I know the 2003 was sublime, although not as long lasting. I’m curious to see how the 2010s or 2015s fare, but not prepared to broach yet. If i can get hold of a bottle of each it will make for an interesting comparison!

The last part of the experiment will be tomorrow night now I’ve pumped the final halves of each.