Sniping in the Community

It may just be me but recently, I seem to have noticed an increasing level of unpleasant sniping between some members of the community. It’s not necessarily at a level that invites reports to the moderators but unpleasant enough that it often leaves a nasty taste, which even a glass of my favourite wine doesn’t always mitigate.

I usually consider wine to be one of the last remaining bastions of decent civility, so it seems to be a shame that things have descended to this state of affairs on occasion. I wondered whether it would be too much to suggest that consideration be given to appointing some form of moderation to manage this. Maybe, one or two moderators, who would have the authority to modify posts that perhaps overstep the mark (or may be perceived by some as doing so) and perhaps an icon to alert the relevant mod, so that s/he can consider the merits or not.

I know that some will argue that there are moderators already in place but to be honest, I have been reluctant to escalate some comments, as sometimes it seems that the remarks may not have been intended to offend and I wonder whether such reporting would be perceived as petty.

Anyway, just some personal musings. If this is something that the Society is willing to consider, may I suggest the likes of @laura or @Inbar, as both are invariably polite and sympathetic, when dealing with posters on this forum.

bastion is a good word - nicely captures the futility of it - virtual networks are structurally uncivil and will topple our defences time and again. Wine is only useful in drowning our sorrows I’m afraid.

I may also be guilty of this, but that is not the point of this post. I have faith in the level of moderation already in place. What is key is that anyone who feels uncomfortable with a post should feel free to flag the post. the Community is somewhat self regulating, the Admins don’t read every post immediately. Action if a post is flagged has been swift in the past. It is not the member’s task to decide if a post is okay or not, if we feel uneasy the admins (@laura and @Kelly will step in without judging the individual raising the flag. Sometimes action is taken (ranging from a polite discussion to more extreme measures) and sometimes it is a polite reply that the flagged post is fine.

I wholeheartedly second @szaki1974’s brilliant point - there’s never any judgement about a post being flagged here at Society HQ. We’re here to help, always - and it’s very important to us that everyone feels safe to let us know if anything you’ve read here has bothered you.

I also agree there has been more sniping here in recent months - although 90% of the time we’re our usual friendly Community, it would be nice to up the positivity levels a bit. Is there anything beyond increased moderation anyone would like to see us do to help with this?

Lastly, it’s perhaps worth noting that even though most of us feel ‘used’ to the current state of the world now (at least in terms of how it affects our daily lives) we’re probably all suffering with the effects of it subconsciously. I know there’s been times I’ve seen it manifest in myself in unexpected ways, so maybe some of the heightened feeling could be a temporary reaction to these strange times we’re in.

This is how you flag a post, by the way: 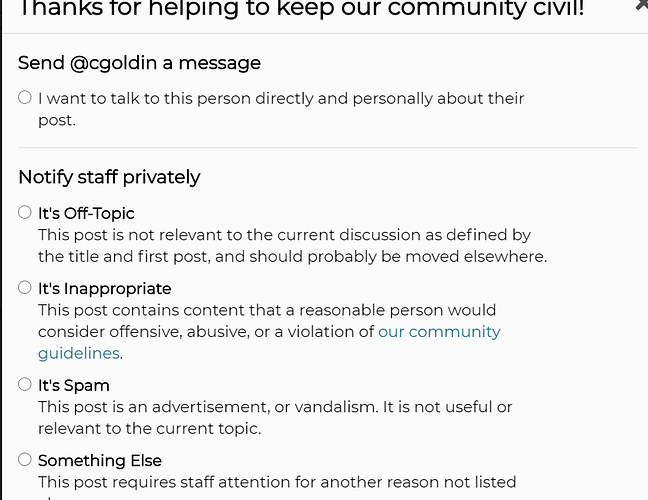 Cheers @szaki1974 I’ve cleared my diary for the rest of the day and I’m ready for all incoming.

Thanks for the responses. To be honest, I have never reported or attempted to report a post (conflict avoidance syndrome, as my day job involves too much conflict resolution, ironically), so was unaware of all of the options that are already available. I like to switch off, when I finish work, so the Community has become somewhat of a sanctuary, especially during the past few months. Hence, the concern about the rise in less friendly posts.

Anyway, will leave it there and hopefully the current system will be sufficient to manage the admittedly few inappropriate posts. I should also say that I wasn’t referring to anybody specifically, as I don’t really note who has written what and most of us have probably, at one time, written something that came out differently from what we intended. Thanks again for your responses and thoughts.

I should also say that I wasn’t referring to anybody specifically,

That’s a relief! I always assume it’s me that’s the culprit…

I feel this is the nicest and politest board I’ve ever come across, my faith in humanity was duly restored when joining. Hopefully it remained that way subsequently.

I do agree with the observation about an agreed level of sniping. The community has expanded significantly in recent months. I think as a community grows, it is inevitable that the range of what people are comfortable with in terms of communication style will increase. Personally, this topic aside, I usually err towards not saying anything, in public forums, unless it is a positive contribution to a discussion. My job also involves a fair amount of robust disagreement and conflict so I don’t actively seek it out of hours. It also explains why I don’t weigh in, despite being a mentor, to pull people up on sniping posts. I am a bit reluctant to see active moderation as the community has self moderated in the past such as when we had the brief and aggressive intercessions of a number of Montreuil devotees in a short time. Perhaps this means that those of us who have been around for a while need to be a bit more challenging.

Personally I think criticism of an idea or opinion is fine, but a clear line should be drawn at ad hominen attacks.

I think we should be grown up enough to handle disagreement on a topic of discussion. Criticism of an idea or opinion can easily come across as hostile without any intent, and I think it helps if we assume the best in other people. Even if wrong, that assumption should help de-escalate the situation.

I agree that on occasion, Members allow their passion on a subject to overtake their better judgement.
I left here, after an unfortunate altercation - almost a year elapsed before my return!
I would wish that sentence on no one.
Sometimes better to pause, during a discussion that is becoming fractious. I did it recently with “FIN!!” I didn’t mean it, but it was the escape route away from saying something I might have regretted.
There are times when “I FAIL” to make my point.
It is not that I actually recind my argument but in truth cannot find the appropriate words to define it - absolutely.
Better then, to put the keys of the JCB back in the drawer!! lol
We all should be kinder to those around us, even with those we vehemently disagree with.
The World then, would be a more agreeable place.

Laura,
I suggest that users must use their proper names rather than hiding behind pseoudonyms. Have a read of the comments below articles in the Guardian, Independent, Daily Telegraph to see how bad it can get. If you meet someone, you tell them your name rather than something that you can hide behind.

Is this site for frivolity or serious commentWS is a retailer basking under the respecyability of a fantassy membership;it has many good points but the time has come to ask many serious questions about1 1.The Chairmanship and the democractic election of the committee 2. The presentation of the Annual Accounts and the lack of information 3.The management of the Sociaty 4.The catastrophic performance ove the over the last six months all attributed to Covid 19 whilst other retailers were back up on their feet in half the time 5 Wjat appears to be a complete lack of communication to those marketing the product and controllin the inventory. 6 And now the final blow;yesterday I received what purports to be a catalogue for the summer pages unnumbeed(25?) without any of the wines that I purchase,
The comment “we do not play the price game” reveals the extent of the problem Madam.The WS is not a gentleman’s club but according to the media a serious retailer.We are in the 21st century and an important retailer which is losing it’s way.I am 86 years ago and have managed businesses in thee distribution business amongst others all ove the World.If you keep going this way you might as well ask Amazon to run the business for you
Regards
Michael

I am strongly in favour of keeping censorship to an absolute minimum on a forum like this. Once we decide that someone should be tasked with editing out ‘sniping’ in posts, that individual’s views will become dominant. Where will they choose to draw the line?

There is nothing meaningfully offensive on this forum, that I’ve seen. There have been some slightly sharp exchanges but very few have crossed the line, in my opinion.

It is also easy to avoid the sharper exchanges by choosing the right threads. The weekday and weekend drinking threads are invariably good tempered and polite.

Forcing people to use their full names would result in many stopping posting. This forum is about the enjoyment of alcoholic drinks. The posts are easily available on a google search. Not everyone wants their thoughts on wine to be associated with them in other aspects of life, eg. professionally. The privacy implications of forced use of full names would be considerable.

Hello @mayerling, just for transparency, this is a member to member forum. If you would like a response from TWS please contact member services on either this number : 01438 741177, or email them at memberservices@thewinesociety.com .
We look forward to hearing all all about the wonderful wines you have been drinking over the summer, have a look at our Weekend Drinking Thread to find out more. Thanks

I’m still pondering how a Guardian discussion forum descends into a level of ‘sniping’ that could offend… the suggestion of incorrect Avocado stoning technique?.. bad-mouthing Waitrose produce?.. owning a Volvo with less than 15 years of age?

Or the Telegraph, where you’re likely to be admonished for calling a napkin a serviette when criticising the table laying skills of the staff at your London Club.

I once accidentally clicked on a Daily Mail article and scrolled down. I’m happy with the Community being at ‘Guardian’ or indeed ‘Telegraph’ if thats the benchmark.

And now the final blow;yesterday I received what purports to be a catalogue for the summer pages unnumbeed(25?) without any of the wines that I purchase,

I have no idea what your criticism on this point refers to; my copy is a perfectly satisfactory piece of printed marketing for a wide range of wines. Are you saying that the pages are not numbered, because all of mine are (a minor irritation for me are publications without folios), but that’s not the case here)?
Surely there’s enough wine to choose from too - I could happily pick 6 or 7 excellent wines to try after just a brief flick through the pages.

I can’t decide whether this was a serious post (apologies if it was) or we’ve been spammed again. As @Leah suggests, perhaps contacting the Society’s member services might be more productive.

There is now a separate string on the Summer list. (My copy was numbered, 44 pp, to check we are talking about the same thing.)

This is a space for me to be open about my interests (and about my wine consumption!

) . Frankly, if people wish that, then the forum posts should be hidden non-searchable by search engines.