I thought I’d put a recipe blog together given the interest in the other thread. Firstly - thanks for all the great wine suggestions. Rather predictably from the thread, the chosen wine was this: 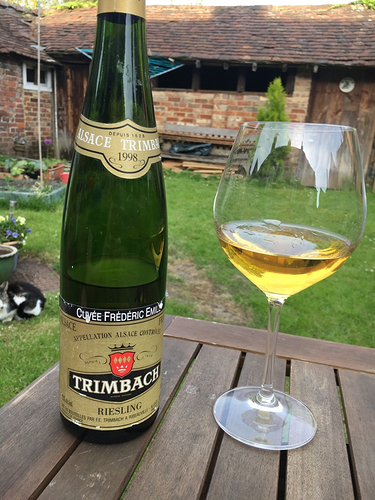 The recipe idea came from a lovely stall I visit sometimes in Borough Market that do a huge smoked duck breast for about a tenner. I thought I should give it a go! Ingredients are as follows:

(Serves 2)
Small handful of hickory chips or sawdust
2 x duck breasts , approx 200g each gave us plenty and could even have stretched to serve 3
A handful of shelled walnuts
2 chicory (if this were a chicken recipe, I could have called it Hickory, Chicory Cock)!
1 little gem heart
Approx 100g fine beans
1 spring onion
Red wine vinegar and groundnut oil to dress
Crusty bread to serve

The setup uses a Big Green Egg (other outdoor cookers are available, many would argue that other outdoor cookers are better value for money as well). The Egg, as it will henceforth be referred to, is a Kamado Grill - a ceramic charcoal oven that can be set up for cooking directly over charcoal, indirect cooking “slow and low” and in this case - smoking. It also makes an amazing pizza oven, but perhaps that’s for another thread. The thick ceramic walls retain heat incredibly well and as such the Egg is designed to be used with the lid closed rather than a conventional BBQ that might be left open in normal use

To use the Egg as a smoker, one would generally use large wood chips, soaked in water, directly on the coals but because the Egg is relatively new I used up some powdered wood chips that I already had from an older smoker. Therefore I fashioned a ‘smoking box’ out of a disposable roasting tin and some foil. I also soaked the wood shavings for an hour to stop them burning off too quickly (not sure if this is actually necessary but seemed to work). The Egg is designed for use with lumpwood charcoal, which also gives a nice smoky taste 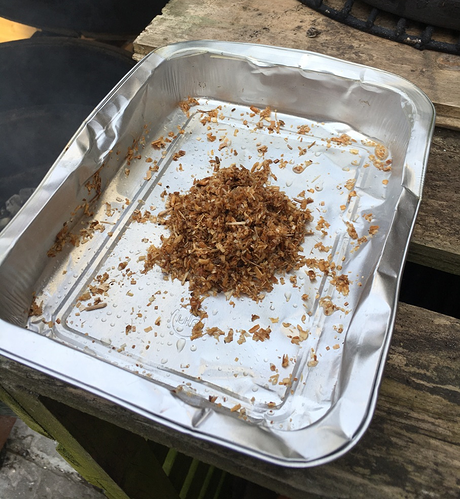 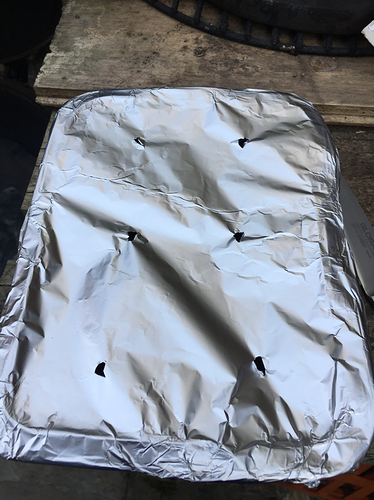 Quality of charcoal is paramount with this type of setup. You can buy charcoal directly from the makers of the Egg but it costs a fortune and this stuff is much more reasonable while maintaining excellent quality 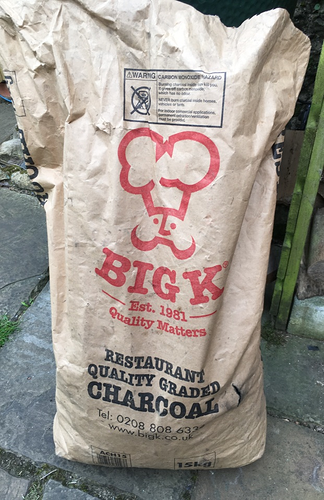 The Egg was set to hot smoke indirectly using the heat deflector and grill as shown. The target cooking temperature was 110 C - it’s amazing how well these things hold a steady temperature using the vents at the top and bottom to control airflow and so heat 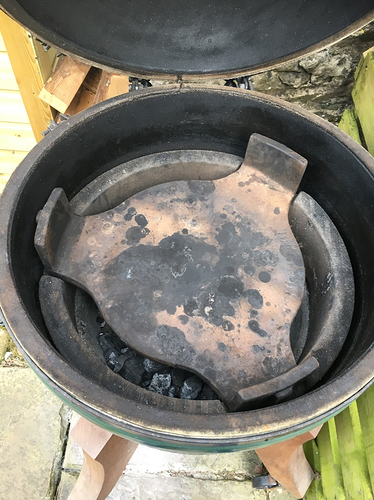 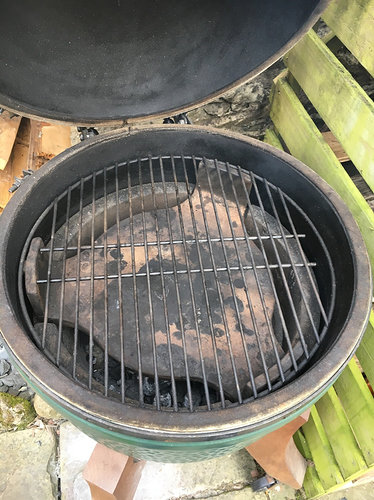 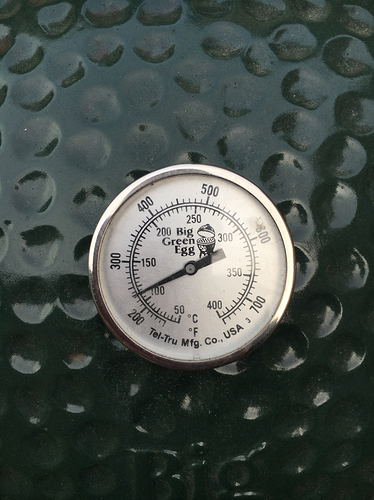 The duck breasts were kept at room temperature for an hour then were scored and seasoned. I’ve read recipes that use orange, plums etc but was interested to get the technique right before thinking about additional flavourings. Once the Egg was at temperature the duck breasts went straight on to the grill, skin side up. My temperamental thermometer is now working so was put inside one of the breasts to check cooking, but as eluded to on the other thread this is unnecessary if you are comfortable cooking with touch - just treat it like a steak. I love a gadget and I’m not going to apologise for that!! 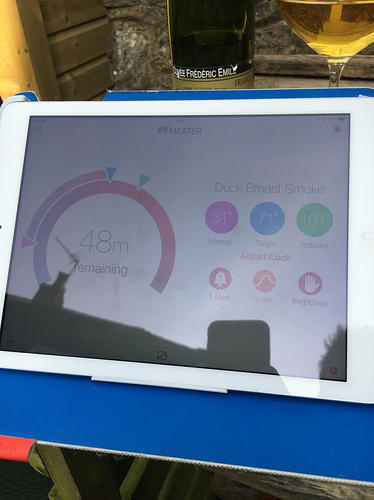 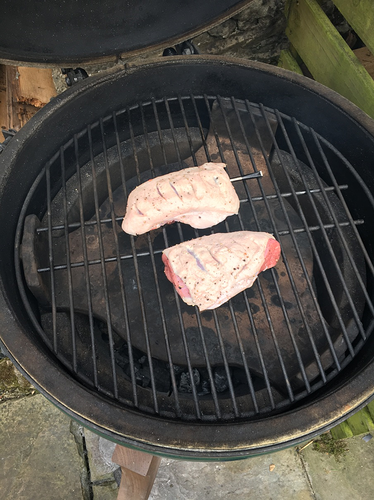 In the meantime I prepared a salad of shredded lettuce, sliced spring onion and walnuts and mixed a simple red wine vinegar and ground nut oil dressing (1: 3 vinegar: oil with some seasoning). I considered avoiding vinegar entirely as opinion is split about how it can destroy a wine, but this seemed a nice combo so I went with it. The green beans were blanched and refreshed in cold water, sliced roughly in three and tossed with the rest of the salad. The chicory hearts are lovely when halved and seared in a dry griddle pan - it brings out a lovely nutty bitterness. These were added to the dish at the end with a few outer leaves removed before griddling and lining the edge of the bowl 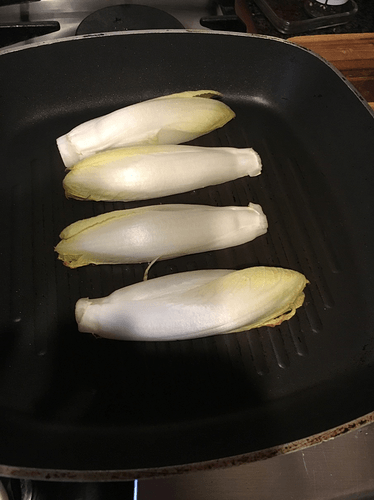 The smoke was supposed to last around 45 mins, plus 10 minutes resting and the target temperature was 71 C. In reality it took a lot longer. The thermometer cooking graph (yes - you get a graph) says it took an hour and 26 mins to reach 70 C at which point I decided to crack on and rest it 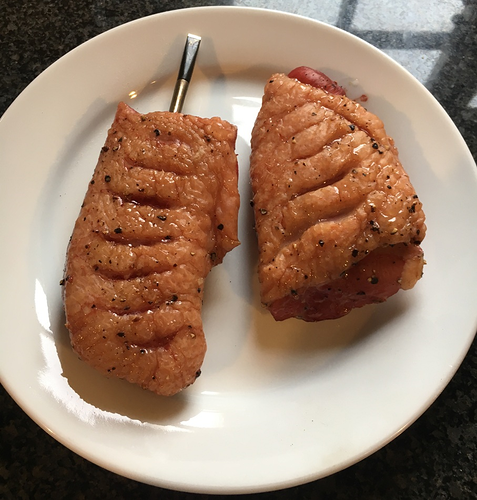 As you can see the skin looked a little fatty and unappetising, so I opened up all the vents on the Egg, removed the heat deflector and smoking box and within 10 minutes it had reached about 250C - perfect to pop the breasts back on skin side down for about 90 seconds (although one got a bit more flame than the other)! 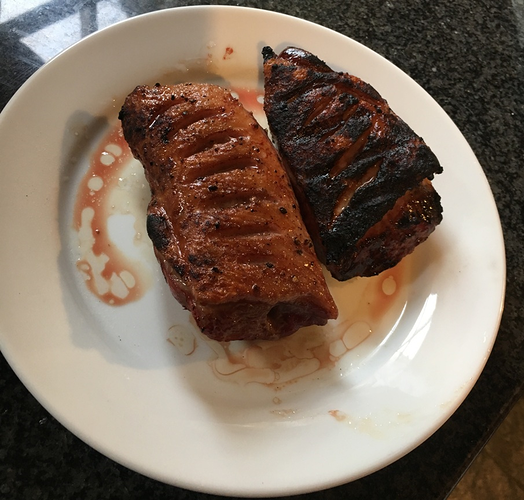 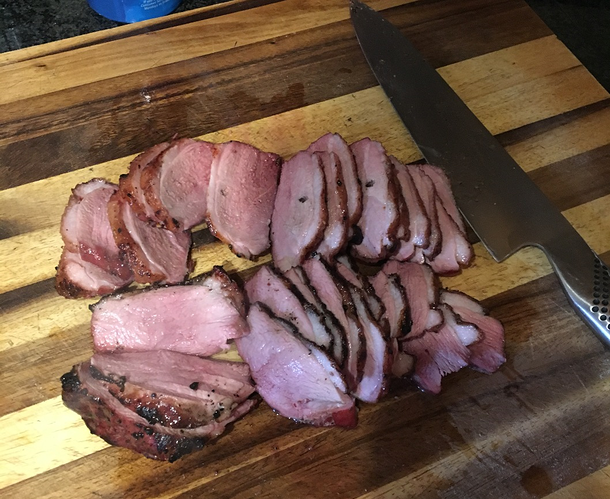 The duck was thinly sliced and served. we like our meat rare and next time I think I’ll take the duck to 68 rather than 70 C but it wasn’t far off for our taste 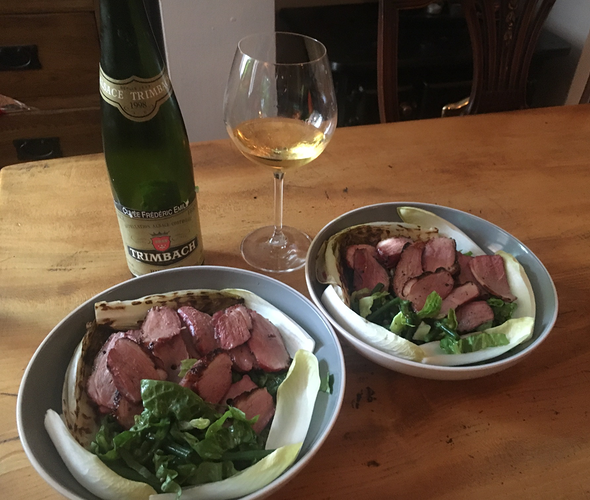 And so the wine pairing… 1998 Trimbach, Cuvee Frederic Emile Riesling 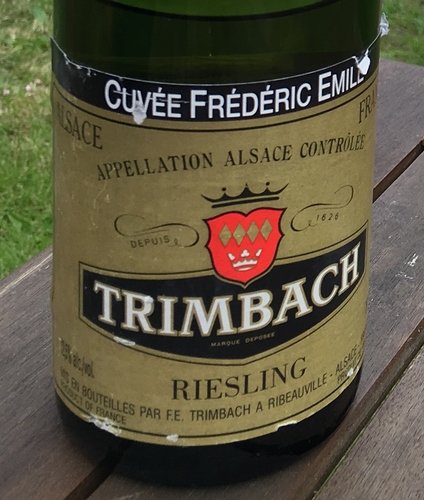 That Trimbach really is something. I’m glad to say the cork was OK and the wine was singing!

I’d waited some time to open the 98 having tried more recent vintages (08, 09) in restaurants over the last year or so. For what its worth I follow the popular opinion that '08 is a better wine than '09 but both are very good

The '98 was well worth the wait. The nose is deceptively subtle with hints of orange marmalade and a touch of sherbet maybe? Not sure. The palate is still so crisp and fresh even after 20 years. That orange marmalade is the overriding flavour to pinpoint but it’s not sweet. There is an algae note, like licking a river rock. It’s hard to describe but it adds something special. The wonderful acidity leaves your mouth watering. It really was sublime and goes right up there with some of the favourite wines I have tried

It was a lovely christening to our new wine glasses too

Hope you enjoyed reading about the recipe - I certainly enjoyed cooking it, eating it and writing about it

[Edit - not sure why the pictures are coming up in the wrong orientation - can any mods help?] FIXED

Wow! This is such a great post, thank you! Looks like a dream dinner for me, and an excuse to look into investing in an “egg”!

Do you do a lot of outdoor cooking? Loved the idea of using it as a pizza oven - hope you’ll post more about that.

Sorry about the image orientation. I thought we’d fixed that but we’ll have to look into it. Are you uploading direct from a phone, and if so which type of phone are you using?

As for the wine…

So, so jealous. Might rummage in the showroom for some older Alsace bottles next time I’m in there.

@NickP, this has been a fabulous read! Sitting in the garden, in the sun, with the birds singing all around me and reading (and seeing!) the recipe as it evolved has been a treat!

As for the Trimbach… Oh my! I could almost taste it from your description! What a privilege it is to have access to such wonderful food, and to be able to match it with an Alsatian gem!

Thanks for sharing! You inspired me to share my Salmon Saltimbocca recipe, which I had the other week. Which I’ll do at some point…

Last night’s selection. Would go well with the duck recipe I think

Thanks, I enjoyed writing it

I do a bit of outdoor cooking as time allows, perhaps once or twice a week

I uploaded those images on a laptop

I do a bit of outdoor cooking as time allows, perhaps once or twice a week

Will have a look into the image orientation issue when I’m back in the office on Monday. Right now I’m too distracted by all the celebrities arriving at the Royal Wedding

That’s a lovely message @inbar, thanks!

Looking forward to seeing your recipe!

Thank you so much for taking the time to post this! I am nos jealous of your egg…

Many thanks for posting that, @NickP. I am delighted to hear that the recipe worked well, and the wine was as sensational as it can be. A winner all round! Much appreciated.

Big green egg question… Does it also do cold smoking or “only” hot smoke?

I’ve spent some time on their website on and off this weekend. Green, for envy.

Just a hot smoke, although you can keep it fairly cool it is definitely not a cold smoke

Did a couple of chunky sirloins on it tonight. The flavour is incredible!

If you got a cold smoke unit, you could make the green egg into a cold smoker - I use an old wardrobe for my cold smoking and suspend the salmon or meat off clothes hangers.

That’s a good thought. There is a vent at the bottom and a bit of space so it would probably be fairly straightforward