And I’ve cracked. Think I’m getting the hang of this thread now…

There is no turning back now

One on the way with time to settle before trailing at the weekend. Thanks for the info. Being able to cellar something you like for that long seems useful.

I am very happy to accumulate Rhone 2016’s particularly in the face of Bdx & Rhone 2021 both of which I hope to sit out.

Was the dinner at the domaine? Sounds fantastic. I must ask, how were the wines? The 1968 in particular.

Sounds like glass two tipped you over the edge? At lease you lasted an hour - quite respectable really.

I bought a case on the strength of the 2007 magnums that were briefly available a couple of years ago. It’s great wine. I might buy another if funds permit and it’s still available.

The last of these was consumed in August this year and was truly excellent.

We picked up a mini vertical of the Pierre Amadieu Gigondas Le Pas de l’Aigle in a presentation box on a visit to the domaine (or at least, the shop in Gigondas) last May, the vintages being 2014, 2015 and 2016. Cost about 60€ I think.

Not tried the 2016 yet, but was very impressed with the 2014. My tasting note from earlier this month: “Drank over several nights. Light red in the glass, beautiful nose, liquorice allsorts and kirsch, very smooth, tannins not intrusive. Buy more!”

Was the dinner at the domaine? Sounds fantastic. I must ask, how were the wines? The 1968 in particular.

The dinner was at L’Oustalet in Gigondas itself ( Le Restaurant — L’Oustalet - Gigondas (loustalet-gigondas.com)), and I was there in 2015 as one of the very lucky recipients of one of TWS’s member-get-member prize draws, where the lucky winners were taken to the Rhone in the company of Marcel Orford-Williams for a few days of vineyard and produces visits.

At that particular meal, we were joined by several of the producers we had visited during the trip including Louis Barruol from St Cosme, Jean-Baptiste Meunier from Moulin de la Gardette, Jean-Michel Vache from Clos des Cazaux (not pictured), Charles Blagden from Le Bois Pointu and Jean-Marie and Henri-Claude Amadieu… 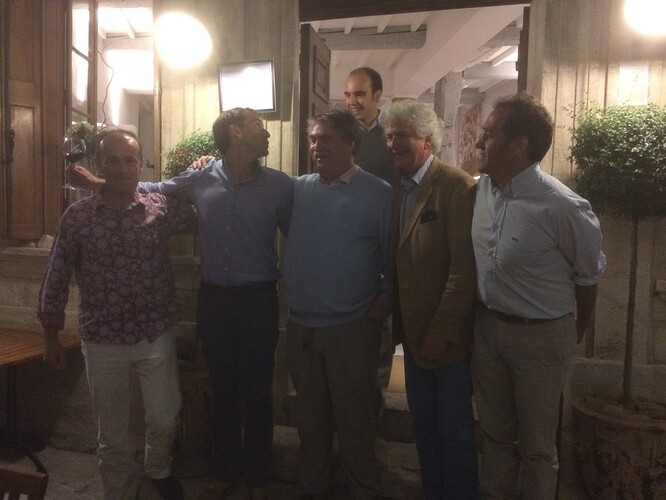 Each producer bought their own wines to the meal. Some highlights, including that 1968 Moulin de la Gardette, were a 1993 St Cosme, the 2007 Le Pas de l’Aigle and Le Clos des Cazaux Vielles Vignes Blanc 2013. One other wine that stood out, that I’ve never sourced since was this Les Grains de Novembre, Vin de France - Le Clos des Cazaux A fully botrytised, 100% white grenache. Yum!

The 1968 Gigondas was amazing, still packed with fruit and an almost port like concentration. Shared between 16, there was no chance of a second glass 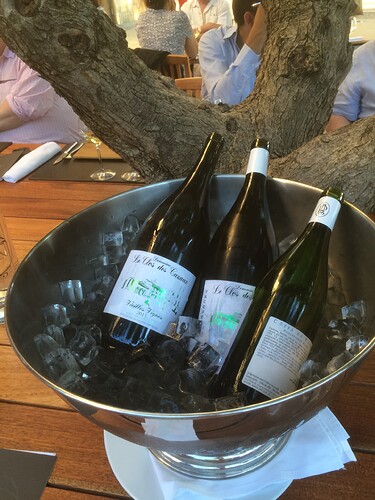 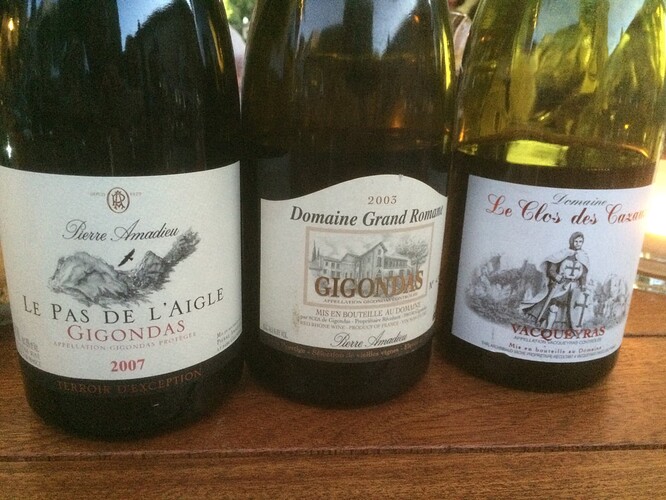 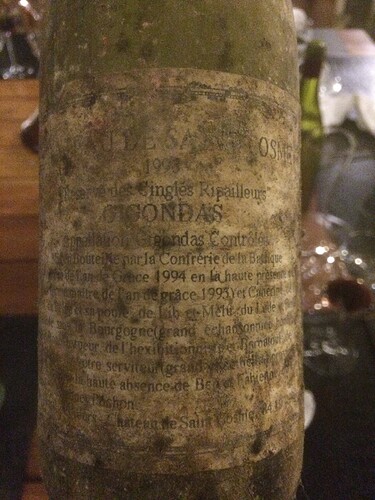 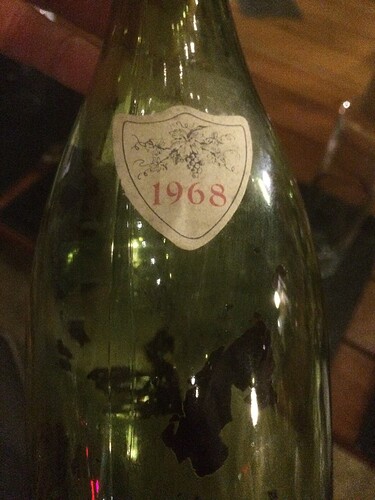 A memorable, long and boozy evening. By the end of the night the whole terrace was involved with the various producers walking round filling everyone’s glasses 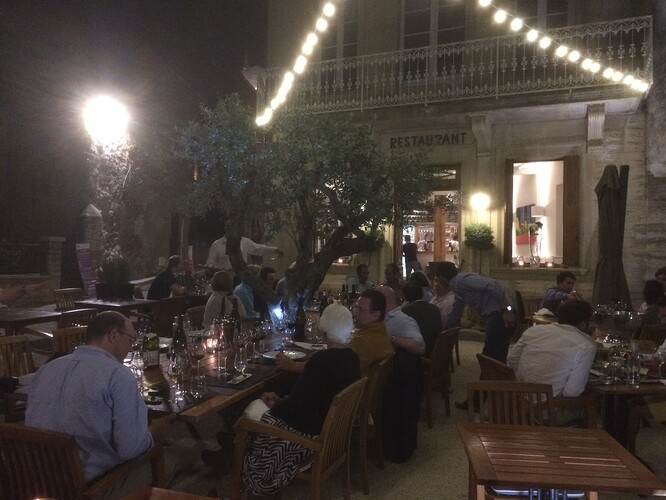 What an amazing experience!

That sounds absolutely marvellous, thank you for posting. Gigondas is rising high on the future travel list after that as is my anticipation for this weekends bottle.

What a wonderful experience! Thanks so much for posting,

I have - been eyeing it up. Meant to be a very good wine with a bit of bottle age to boot. Anyone tried the 2016? 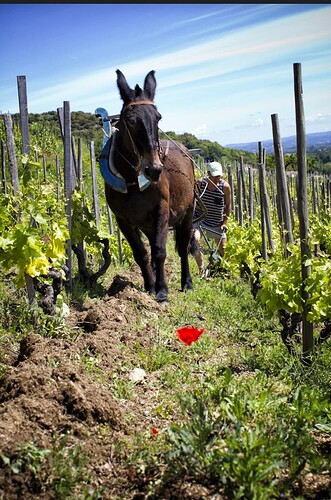 Anyone familiar with the 2011 vintage of the Domaine Maby Nessun Dorma Lirac? I’m unfamiliar with both the wine itself and the vintage.

I’m planning on opening one for this evening with a beef stew I’m currently knocking up, and am debating whether it may want a bit of decanting? Or whether with its age, it may be good-to-go straight on opening and may in fact perhaps lose its edge a bit if decanted?

Considering it’s “50% very ripe mourvèdre” and “sumptuous and extravagantly rich” with a WS date to 2023, I’m kind of thinking the former - decant - and will probably decant some / keep some corked & in bottle and then work with both to see for ourselves which we prefer; but any thoughts from any recent experiences with this wine appreciated :~}

Haven’t had this wine (would be keen to try it!), but from what I’ve read about it previously, it sounds on the fuller and more powerful end so I’d definitely be thinking about decanting. Possible there may also be some sediment with this age.

However, as you say, standard answer is open it an hour or two before you need it, carefully pour your self a small glass, and put the cork back in. You can then see what you think, and how it changes with a bit of air and make an informed decision.

Edit - also be keen to hear your verdicts on this one, it’s on my hit list.

Anyone familiar with the 2011 vintage of the Domaine Maby Nessun Dorma Lirac?

Yes I bought 6 last year, it’s great and I’m slowly working my way through them. I don’t think it needs a long decant. I visited Domaine Maby last year and they said drink it from the bottle and it’s good for about 15 years.

they said drink it from the bottle

In a brown paper bag, I suppose?

Well … I tasted straight on opening and again a few minutes ago, and goodness gracious me this one packs a punch; fortunately, a very gorgeous velvety punch. Very sweet intense fruit on first dibs - “sumptuous and extravagantly rich” indeed - but that’s already mellowed a bit 10 mins in. Lovely stuff and I know wife will certainly enjoy this one, in contrast often to the more savoury reds we tend to open when we do open a red.

I’ve decanted a bit of it anyway to see how long it lasts that way and what happens to it etc, but will keep the wine-in-bottle itself as our main supply. Looking forwards to this one :~}

Thank you for your thoughts & comments @Winestwit & @MattH

If anyone out there has any 2018 Candives left, now is a good time to get stuck in.
Delicious, like an alcoholic blueberry mouse. Fruity, rich & smooth as silk. Pleasant low level of acidity, barely noticable tanins.
Great now & my limited experience with this wine would suggest it’s not one for long keeping.

Good to know! Have to say I wasn’t fussed on my first three bottles, but maybe I jumped in too soon. They were okay, just a bit simple and a little bitter on the finish and I guess not the syrah bargain I was hoping for. But maybe my expectations were skewed.

Anyway, I’m probably going to take out the last three as part of my next pre-invoice reserves clearout

It had come on leaps and bounds leveling out since finishing our first 6 about a year ago. It’s certainly not a complex cerebral wine, but rather its beauity lies in it’s simplicity and an almost featherweight lightness which i hadn’t expected. However along with the blueberry fruit and a touch of tapenade something else was present on the pallet we couldn’t quite put our fingers on…Mrs D said cheese, I said soap. No discernable bitterness on the finish.
Really wasn’t expecting anything too grand, and happily it exceeded what we were hoping for.