Reading in Time of Corona (and beyond!)

I have been rather greedily consuming books by the late Anthropologist, activist and all-round stunning intellectual David Graeber.

I loved his The Dawn of Everything: A New History of Humanity (a collaboration with Archeologist David Wengrow), which poked and challenged my often Eurocentric understanding of history.

I was shocked (and awed!) by his analysis of the workplace in Bullshit Jobs, a book which confirmed many of my suspicions about work and jobs in the 21st Century. And I’ve just started Debt: The First 5000 Years, which seems an apt subject as the world is collapsing around our ears (to paraphrase REM).

His untimely death is a huge loss.

Immensely enjoying re-reading a childhood favourite - Stevenson’s Treasure Island. As in childhood, this is utterly un-put-downable! What a book!

Would be great to read with a glass of rum in hand… Bit too early for that, I guess!

I re-read Treasure Island a few years ago. Really enjoyed it, though I was surprised by how dark the story was in places. As a child I would have read it as a straight-forward adventure yarn.

how dark the story was in places

Yes! I agree - some of the darkness was definitey lost on me as a child.

It’s one of those books that I have read so often I can quote quite a lot of it, especially John Silver’s lines. I think Stevenson is rather overlooked, Dr Jekyll and Mr Hyde, and Kidnapped is fantastic too.

Currently reading a lot of poetry, I can’t seem to digest a whole novel just now. I put it down to listening to Dickens talking books- David Copperfield and Great Expectations so far. But the David Copperfield rather spoiled the recent film, which was also very good, but of necessity with a series of compressions of the story.

Currently reading a lot of poetry

Anything in particular? And anything you would recommend?
I always have poetry books lurking around to be read at bedtime, but it’s usually known and loved ones.

One I remember is ‘Be I a’goin Cap’n’, Ben Gunn I think although memory fades!

Ben Gunn is- “I dream of cheese, toasted mostly”

I have like you @Inbar a pile of old favourites, but now and again one reappears after a long period of neglect. Sylvia Plath has re-emerged following a very cogent argument in her favour from a youngster of my acquaintance (she is of course quite right, see Ariel) and Auden who I am sure will be forgotten too soon and undeservedly

'O plunge your hands in water,
Plunge them in up to the wrist;
Stare, stare in the basin
And wonder what you’ve missed.

'The glacier knocks in the cupboard,
The desert sighs in the bed,
And the crack in the tea-cup opens
A lane to the land of the dead.

I have just come by a great heap of my mum’s poetry books and am trying out some that I have never come across before. But with poets it is often years before I get, or feel what they are on about, so it is hard to recommend something you don’t yet know.

'O plunge your hands in water,
Plunge them in up to the wrist;
Stare, stare in the basin
And wonder what you’ve missed.

'The glacier knocks in the cupboard,
The desert sighs in the bed,
And the crack in the tea-cup opens
A lane to the land of the dead.

Strangely enough, I was thinking of these very lines earlier today as I was shaving my chinny-chin-chin; November-darkness-blues are upon me a wee bit today, and these lines kind of capture some of the feeling!

I think of Alan Bennet’s History Boys, where Hector says that the best moments in reading are when you recognise something you thought private or particular to yourself, and here it is from someone you never met ‘as though a hand has come out and taken yours’. I love Auden’s use of cups and cupboards to express himself.

There’s a certain slant of light

There’s a certain slant of light,
Winter afternoons
that oppresses, like the Heft
Of Cathedral Tunes-

Heavenly Hurt, it gives us-
we can find no scar,
But internal difference-
Where the Meanings are-

When it comes, the Landscape listens-
Shadows- hold their breath-
When it goes, 'tis like the Distance
On the look of Death-

Rather like the songs of Leonard Cohen, many people see this as a bleak and remorselessly miserable poem; I think one can actually view it as a meditation on the interaction between nature (or from a theistic perspective, the divine) and the self. It is both deeply personal and at the same time universal. I love it.

I think of Alan Bennet’s History Boys, where Hector says that the best moments in reading are when you recognise something you thought private or particular to yourself, and here it is from someone you never met ‘as though a hand has come out and taken yours’.

I love that sentiment of Hector’s (and love the play too) - and this is exactly how I felt when I first laid eyes on your namesake - The Lovesong of J Alfred Prufrock… it was like someone kicked me in the stomach… A poem that pushed me more than any other to experiment with writing poetry in English (I have been writing poetry in Hebrew for years before and nearly got published… but that’s not really a good story!

). Another one who seems to capture so many things I thought were ‘private’ is Philip Larkin. My husband will tell anyone who wants to hear that I ‘wooed him with Larkin’

Ah! Sylvia… I always have room in my life for Sylvia. She was a (strange sort of) muse for me as an angry teenager. Every girl could do with an angry woman as inspiration. And as for Daddy.…

The Auden you quoted is new on me - and beautiful it is too! I never quite got on with Auden, though. Something about the rhythm of his verse never quite stuck. But there are a few I go back to from time to time; O Tell me the Truth about Love is one, and another is Refugee Blues - as pertinent as ever!

“l was only happy 'til I was nine years old.”

One of the saddest comments ever made by a great writer. Her poetry has somehow always made me feel sad and angry in equal measure.

The beetle runs into the future. He takes to his heels in an action so frantic its flicker seems to possess the slowness of deep water. He has been green. He will be so yet. His memory ripples emeralds. The...

This’ll be my poem for the evening!

But I do actually like the poem. I’m also fond of Gerard Manley Hopkins, particularly “As Kingfishers Catch Fire”. My absolute favourite poets though are Frank O’Hara and John Donne- make of that what you will. 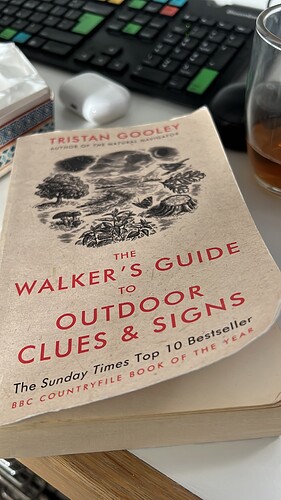 In the non-fiction department, this is a book I try to read a chapter once a week. So informative. And his Instagram / twitter account is also worth following.

Great book. If you haven’t read it, Robert MacFarlane’s “The Wild Places” is wonderful.

I’ve just read Hugh Johnson’s memoir Wine: a Life Uncorked which I enjoyed though some of the vintages he mentions savouring are beyond my reach.