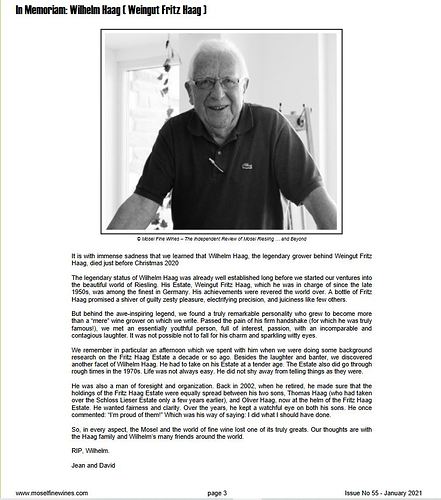 One of my favourite Estates. Such a generous man when we visited him around 2003 - he even gave my wife a bottle of '95 BJS auslese goldkap as a present! What a legacy he’s leaving through his sons, one of which runs Schloss Lieser, arguably making even better wines.

A generous man, with a bone-crushing handshake (eldest son Thomas Haag’s isn’t far off, either). I met Wilhelm on numerous occasions: at the estate, when tasting the latest vintage; at the Grosser Ring tastings in London and at the annual Grosser Ring auction in Trier. He’s the only winemaker who’s ever said to me that if one of his bottles were corked he would do his best to replace it with the same wine from his cellar. I’m pleased to have many of his wines, including the 1997 BJS BA, which is spectacular. His 1994 BJS TBA is the greatest wine I’ve ever had the pleasure of drinking and may well remain the benchmark for the rest of my days. Thank you Wilhelm. Rest in peace.