Its more of an issue with EP and Reserves wines, probably understandably, but equally a bit annoying when we get a meaningless picture and don’t get lots of other useful information and especially formatting which was on the old version…see my previous rants under the new website thread for detail…it’s mainly about ease of record keeping and tabular information.

I was once told by an engineer that this was a basic problem with Imperial - how do you do fractions of 16ths?

(I suppose the answer is ‘you can’, but I think, more pertinently, ‘why would you?’ is a better question when there is a better system out there. Why revert to an archaic system, other than to virtue-signal your Britishness? )

But the mathematics of them is simply horrible. How quickly can you take the cosine of 6’ 4 5/32". And as a Programmer I would have to disagree with them being better in computers; you must store four values for that length 6, 4, 5, 32 or, if you reduce it to one value 76.15625" then it would be no better than our (now) more familiar decimal system.

Then inherent problem with imperial is that our numbering system is decimal and trying to shoehorn something that has a mix of bases into that is always going to be a problem. If you want the truly ideal system then we would need to change our numbering system to duodecimal. But that seems unlikely to happen so it makes far more sense to have measuring systems that match our numbering system. (especially when every other country in the world (I think) now does engineering in decimal).

The crazy thing… is that hand-held calculators use decimal, even in the USA. Yet (linear) measuring devices in the USA use imperial. How does that work?

NOW… for the true pedants, we need to talk about standard wire gauge.

How quickly can you take the cosine of 6’ 4 5/32". And as a Programmer I would have to disagree with them being better in computers; you must store four values for that length 6, 4, 5, 32

6’ 4 5/32" is how you display the length, but you need not store it as 4 values. You can store it in inches, and fractions thereof, in one floating point value - precisely. My comment concerned the storage, rather than programming convenience using existing languages and APIs.

It was a rather flippant point I was making, but I believe it was pedantically correct, and this thread is about pedantry

Me too, flippant I mean, but to continue being so once it is stored as a single floating point value it is no longer precise and is, in fact, precisely as imprecise (

) as a decimal number so stored.

Hmmm… maybe precise was not er, exactly, the right word.

But for the sake of everyone who has a life and might be reading this, I’ll draw a line under the topic.

I have no life and am very much enjoying this…!

Since @Herbster’s still enjoying it, I’ll throw in a couple more bits of pedantry. @MikeFranklin - binary floating point is inexact for decimals, but not for numbers expressed as binary fractions, which is what have here. And @Ghost-of-Mr-Tallis - Vernier calipers are not inherently decimal. There’s no reason why you can’t apply the principle behind them to any fraction.

Hurrah for pedantry! No, there is no reason why vernier calipers absolutely have to be decimal. It’s just that all the ones I have ever seen are decimal, whether imperial or metric. Perhaps non-decimal ones exist (?) somewhere, where someone needs to work in 256ths of an inch!

no reason why vernier calipers absolutely have to be decimal.

Happily, I can contribute: My dial gauge died this week (I broke the pointy end off) - so replaced it with a shiny new stainless steel DIGITAL vernier gauge - which being digital no longer requires a vernier scale, and displays on a little LCD screen. The pedant’s amongst us might assign a new name to it.

Strangely it is near impossible to zero ! typically reporting zero as 0.01mm. Which is totally irrelevant for shopfitting & joinery… but deeply worrying to me. There are no instructions to correct the zero.

It does however offer the option of metric or imperial… however imperial is in thousands of an inch, not in fractions.

Imperial to metric ?
Back in the day, when I was a teenager working for my dad’s construction company, the engineer designed a factory shed style building in metric. The portal frame roof was duly made. On site our ‘lads’ decided to convert the metric to imperial as best they could. So their foundation meant the frames wouldn’t fit, so the roof ridge had to have a six inch(150mm)piece inserted.
Best to stick to one system.

To distract from issues of precision…

I remember when I was a kid around the time of conversion to decimal currency (I always love the fact that this process seemed to completely hijack the word decimalisation, like no other conversion to decimal could be so described!) there was a local old boy who who had a bicycle shop (well a shed in his garden really). I’m not sure how old he actually was but certainly well past retirement and I suspect this was no more than a retirement hobby. And he refused to switch to the new decimal currency. More than a year after decimalisation he was still handing out thrupennies.

There was also a pub in North Wales, I think it might have been in Bethesda, that continued pricing their beer in lsd (also loved that abbreviation predating the now more obvious modern use!) for quite some years afterwards complete with an lsd till. Though your change always came in correct decimal currency!

There was a Craig Charles thing I read many years ago where he talked about how primitive man must have at one time advanced from counting “one, many” to “one, two, three, four…” and now we have reverted back to just “zero, one.” He expressed it much more funnily than I’m am capable of!

There was a story of a haberdasher who sold fabric by the yard, which he measured by stretching it out from his nose to his thumb.
When he changed to metres, he increased his prices by 10%. Asked how he now did his measurements, he demonstrated by…

…stretching out his arm, measuring nose to thumb.

Even though I can see the logic in the metric system, there are some things I find hard to assess properly unless in imperial. A person’s weight in kilos (or pounds come to that) means nothing to me without a conversion to stone.

Likewise a fish has to be in pounds and ounces, though I can ‘get’ food in grams quite readily.

Ah, books and metric! I read a lot of science fiction and I always find it slightly ludicrous when reading, mainly, American books that in some interstellar and long distant future they have people talking about miles, yards, feet and inches. I fairness most quality SF authors have stopped doing this… but not all! Mind you in many ways it’s equally ridiculous when they talk about years! Though, again in fairness, many will talk in ‘standard years.’

Labelled as Santa Ynez Valley with no back label image. 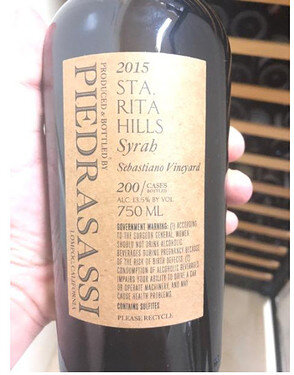 Think something has gone a bit haywire with this description
https://www.thewinesociety.com/product/muscadet-sevre-et-maine-sur-lie-comte-leloup-du-chateau-de-chasseloir-cuvee-des-ceps-centenaires-2016

Edit: Clairette stated below in the characteristics