The newspapers are warning of millions of people who have delayed renewing their passports all wanting to do so now and to allow plenty of time. The passport office says to allow 10 weeks.

There’s lots of info on their site plus a video on photo requirements, and when you upload the photo their software rates it from poor to good. Ones not rated good are likely to be rejected, so you can take another and upload till you get ‘good’.

Last time I renewed my passport I had to fill in a paper form, pay to use a photo booth, cut out and send off two copies of the photo with the form.

This was painless, easy and quick!

Yes, I did it last year and couldn’t believe how quickly they turned it around.

However, the automatic photo rating I found dreadful. It rejected about 40 shots (that I thought matched the requirements), before finally accepting one that was rejected 2 days later by the Passport Office. Another 20 attempts followed, all rejected until I lost patience and submitted one that, though rejected, was better than the previously accepted photo, with a comment on the adequacy of the facility. It was fine and my passport arrived within the week.

I had an almost identical experience with my (Irish) passport renewal. Only difference is that I submitted mine last Sunday so it took a day longer to arrive (today) but I’ll allow that as it was posted from Dublin to England.

I agree it’s an amazingly quick and stress-free experience compared to the old approach.

I wonder if there was some particular aspect of your photos causing it to be rejected. Do they say why?

My first photo went through OK so I have no idea about this. It was certainly a very straightforward process and far quicker than the old Photo-Me booth or trip to the camera shop.

Do they say why?

No, which is the frustrating element. Despite this still much quicker and less hassle than previous renewals.

I renewed my son’s Irish passport last year, 5 days until I got it.
Couldn’t believe how quick it was. Brilliant service.

That’s good to hear. I’ve been meaning to get Irish passports for my kids for ages. I assume it’ll be a longer process for ‘new’ citizens but the speed of my own renewal has given me faith it’ll be less painful than I’d feared.

They’ve had them since they were babies but I don’t think it took long for their first ones to come either, maybe a couple of weeks, should be ok now too with the slow down of the people claiming European nationality since Brexit.

What a coincidence - I have just completed my online application and put my expired passport in the post. It will be interesting to see if my new passport arrives as quickly as all of yours seem to have. The online process was easy and I submitted my photo using the code on the photos from the photo booth in our local post office.

Was it a new blue one?

My passports, covering period from January 1982 till May 2031

Wonder what will be on the 2031 renewed passport… Will it be English Passport? 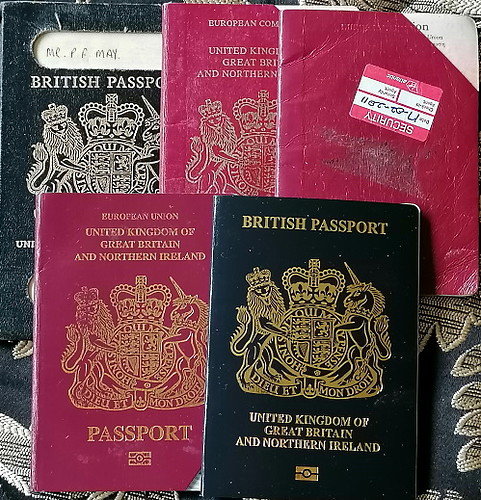 New passport arrived safely yesterday 13 days after my online application! Like @peterm I got lots of progress text messages from the passport office including a couple asking for my old passport… but the delay in receiving that was probably due to the fact that I posted it in the local post box after the daily collection so it took an extra day to be collected and delivered. I received a text last Thursday (5 days ago) to say the new passport was on its way via courier but it took 4 days to arrive. So the passport office itself was super efficient but the post office and the courier accounted for more that half of the time between application and receipt! On the issue of the courier, said passport was shoved through the letterbox without any check that it was correctly delivered - we often get the wrong mail because we are no. 133 and next door is 133a. The old passport is yet to arrive - that is in the hands of the post office…

can you adopt me so I can get an Irish one ?!

On the issue of the courier, said passport was shoved through the letterbox without any check that it was correctly delivered The old passport is yet to arrive - that is in the hands of the post office…

The old passport arrived exactly one week after the new one.

can you adopt me so I can get an Irish one ?!

and im not that needy…honest !

And if he can then my sister and my nieces can also get one. Which is great for them, but just leaves me as a prisoner of the mean-spirited here

Ummm, should one of those be parents rather than grandparents?