Here is a first go at a 2020 talking point. Is wine labelling too misleading?

What exactly does ‘limited release’ mean, why is it important that a wine is made from Vieille Vignes, how old is old, what has a ‘Reserve’ been reserved for? Is ‘Bin 955’ better than ‘Bin 101’?

You know the score! What the heck are they talking about? And don’t even get me started on the contentious/misleading names like Lafite/Lafitte etc! Welcome to 2020.

I looked up Limited release on the internet and found the following site:
https://www.wine-searcher.com/wine-terms
Which might answer some of your points.

Limited Release =a marketing tool used to indicate a wine of higher quality because of lower production; it has no legal significance. LS - 'Limited Stock or Low Stock’ OS - ‘Out of Stock’.

I think you should distinguish between the marketing bullshit and the legal requirements for labelling in certain areas.

The first, including words like Reserve, misleading images and announcements of numerous insignificant awards all have virtually no bearing on the contents of the bottle, but are intended to make you think the wine is special.

The second should give you some idea of the style and possibly quality of the wine, but only IF you have the knowledge or experience of the particular label. Even then you might be none the wiser, depending how widely-applied the requirements are (or how bonkers the law - Germany, I’m looking at you).

But yes, wine labelling can be very misleading, for all sorts of reasons, particularly for the uninitiated.

That really is my whole point. Many winemakers/negociants/traders etc use people’s lack of knowledge to intentionally confuse. Vieille vines tends to make one think ‘better quality’ but there is no set parameter for such a description. Caveat Emptor!

Vieille vines tends to make one think ‘better quality’ but there is no set parameter for such a description.

I can argue either side for the superiority of old vines. Because output from vines decrease with age, and thus commercial logic is to replace them with new more productive vines, the implication is that old vines have survived because they are producing superior grapes.

But, except in South Africa, there is no legal definition of how old vines have to be, it is commonsense to consider such declarations as marketing BS unless backed up by details on the back label, website or trust in the winery.

In South Africa the Old Vine Project certifies vineyards older than 35 years with a seal on the bottle.

They say:
In all the winelands of the world, old vines get proudly mentioned on labels, in many languages. Such is the value everywhere accorded to old vineyards and the wines they produce. But only in one country, South Africa, is it possible for that claim to be certified by the regulatory authority. Here, members of the Old Vine Project (OVP) can now put a Certified Heritage Vineyards seal on bottles of wine made from vineyards of 35 years or older, together with the planting date.

Thanks. That’s interesting, I didn’t realise there were rules anywhere regarding old vines. Not sure 35 years would considered old everywhere but great that they are doing something about it.

If you go to the Muscadet region of the Loire virtually everything is 50/60 years +
I’m not aware of any rules about old vine descriptions. Bordeaux rarely mentions it. I think it is for those areas that like to promote a superior example of two very similar wines.

What exactly does ‘limited release’ mean, why is it important that a wine is made from Vieille Vignes, how old is old, what has a ‘Reserve’ been reserved for? Is ‘Bin 955’ better than ‘Bin 101’?

AS others have said, it’s mostly marketing . Some wineries used terms like ‘reserve’ to describe different ranges of wine - this different price points. We like Villa Maria Marlborough Sauvignon Blanc, they have three levels
Private Bin - cheapest
Reserve - almost twice the cost of Private Bin
Single Vineyard - a bit more expensive than Reserve

and it if one is dealing with a winery’s product all the time, these definitions become understandable, but to the infrequent buyer they lead one to believe the wine is something special.

I mean, Private Bin - sound like wine earmarked for the winery owner, his own private stock!

Rule of thumb: a restaurant wine list will only show the winery name, not the ‘level’ of the wine, and from the price they charge one would expect a better than basic wine. However it’s always the cheapest level.

There didn’t use to be a restaurant wine list without at least one Muscadet, then they all vanished.

I heard the Muscadet vineyards were wiped out by a terrible frost (was that late 70s or 80s?). The ones who replanted and persevered were dedicated and that’s why today Muscadet is so much better than the hectolitres of plonk that made buying Muscadet risky then.

Some Spanish DOs now have vine age requirements for certain levels and using the term old vine. Of course being Spanish DOs there’s no consistency between them, but it’s a start, right?

There are also appellations where “Reserve” (or its cognate in the home language) has specific meaning, usually associated with things such as its elevage. 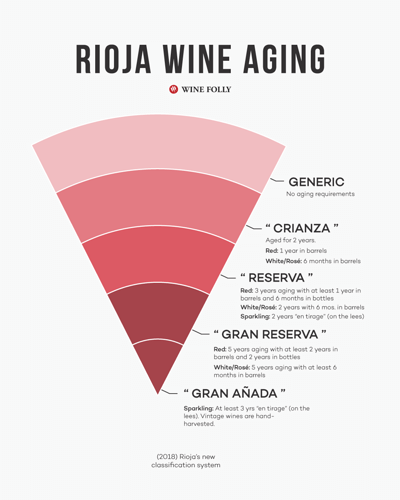 Rules are rules in Rioja where Reserva has a legal meaning in terms of aging.

A lot of other Spanish DO(Ca/Q)s have similar ageing requirements for those words (although slightly less strict in some cases) and Italian DOCs also have Reserva levels for longer ages (in barrel and bottle) wines too.

In South Africa the Old Vine Project certifies vineyards older than 35 years with a seal on the bottle.

They’re trying to do something similar in Barossa. I think it’s just the local growers’ association rather than something with actual legal grunt, but it’s a step in the right direction:

Barossa is home to some of the oldest surviving winegrape vineyards in the world, with one gnarly old cluster believed to date back to 1843. The Barossa Old Vine Charter – classifying vines into four categories by age – is dedicated to the...

Rioja has had its “crianza, reserva, etc” classification for a long time now, and producers used to base its prices very much on the designation of the wine, meaning that bad producers would age their wines for years even if the quality of the grapes was not sufficient to support the ageing process. Many years ago, my local tasting group did a Rioja tasting of supermarket own-brand Riojas, and my main lesson learned was that the Gran Reservas were surprisingly cheap, and were a lot less enjoyable than the lower level designations. The better producers now get this, and refuse to age wines longer just to get a superior designation. They age wines exactly how long they think is best, and price them according to their quality rather than achieved designation.

A different, but analogous, situation is developing in Germany, where there is increasing awareness that quality cannot be indicated only by labelling according to must sugar levels.

I was thinking similar, could not have put it any bette.

Professor Johan Burger of Stellenbosch University has done research comparing old vines (55 years old) against young vines (7 years). I have been in email discussion with him about it.

Juice from berries of nine old and nine young vines were sampled at harvest time in January 2016 and showed significant differences in both sugar and titratable acid levels. RNA from the same plants, both berries and leaves, were extracted and sequenced. Significant differences in gene expression were noticed for genes which regulate ripening, sugar accumulation, cell wall degradation and the development of metabolites like anthocyanins.

The team also investigated the total viral and fungal populations in these plants. Old plants had higher numbers and more genetic variety among the viruses infecting them, whereas younger plants showed more diversity in the fungi associated with them.

The research results show that the gene expression in older vines are different from younger vines and suggest that the ripening process in the older plants takes longer, and may explain the development of flavour complexity, which often is associated with better quality wines.

I ascertained that the two groups were the same clone. Prof Burger told me
“In fact we were very lucky in that the young plants all originated from a single vine in the same vineyard. About ten years ago, one plant was selected, cuttings were made and grafted on exactly the same rootstock (Jacquez). These were subjected to virus elimination before being multiplied and interplanted in the same vineyard. In other words, in any given row, original (± 55-year old) plants and younger plants (7 yrs at the time of the experiment) grew under identical conditions.”

I don’t dispute any of this Peter. My real point is that, what is Vieilles Vignes in one region (say 20 years old vines) might be older (40-50 years old) in another, making the whole idea useless as a means of comparison. All the winemakers I’ve ever asked do not know of a definition for their own area let alone others!

The only actually law rather than voluntary definitions in any wine law that I’m aware of is DOQ Priorat where old vines have to be at least 75 years old (I think). Some of the newer Rioja geographic levels also require an age of vines but don’t give a definition of “old vines” definitions.

Since it’s only these areas which are using it for their specific regions @AnaGramWords point on it not being particularly meaningful still stands!

Thanks, for that, Peter.

I wonder what the gene expression would be if a vine is propagated by layering, with the connecting shoot kept intact? My guess would be that as long as the primary source of nutrition was via the older roots and trunk it would be as an old vine, but as the younger roots take over it would be as a younger one.

Also, to be provocative, what would the official age of such vines be?