Having enjoyed a bottle of Canicatti Nero d’Avola last night, I was interested to read that according to a mass Majestic blind tasting, Nero d’Avola is our favourite grape.
The results were:-
78% Nero d’Avola
16% Cabernet Sauvignon
4% Shiraz/Syrah
2% Sauvignon blanc

It appears that they used Nero Oro at the tastings, as a ‘typical’ example of Nero d’Avola; not sure it’s necessarily the case, as Nero Oro is done in the Appassimento style, which is obviously beefier with more concentrated fruit. It’s a bit like saying that to know what Corvina tastes like you should try Amarone.

Having said that - I’m not surprised it won - it is a delicious, easy to like wine. Fruit forward but with good spice and interest. The riserva one is even better.

Not surprised either that “Pinot Noir didn’t get any votes”, when all people had to try is a Romanian example, which - despite being a decent wine - is not exactly the best example of an amazing grape.

Well that is a surprise at first glance. I think the winner is an apassimento wine so perhaps it was the underlying sweetness that swayed the tasters? At a blind tasting without any food I reckon a red with some soft sweetness would be a winner with many people.

I think the winner is an apassimento wine

The apassimento will indeed have swayed many I think, and whilst it’s a pleasant style and Nero is not a bad grape, I’m not sure that I would place much credence on this…many of the best reds are from blends after all.

There is a parallel here to one of the most popular TWS wines; Baccolo Appassimento Rosso Veneto 2017, four pence less per bottle than the Majestic Nero Oro.

I note that Majestic also sell a Nero Oro Riserva 2016 for another three pounds.

Look, I know this meant to be a bit of fun. I really, really, really tried to sit on my hands and not post. But this sort of claim to have revealed the UK’s favourite wine (from Majestic) is the biggest extrapolation from minimal data since Brainiac Science Abuse graced our screens*! It’s based on just eight wines. It’s not clear that everyone tasted every wine. It’s based on that well known fair voting system of First Past The Post. In other words, you can’t even be sure that the Nero d’Avola was the favourite. And then, why pick on the grape as the only influence on the flavour? One might as well pick the country. Or the continent. Or the winemaking practice (apassimento, as mentioned). Or the vintage. Or any other of a host of factors.

As I say, I do realise it’s not serious in its claim. But this sort of abuse of numbers is far too common, and goes unquestioned - see the original Wakefield claims which kicked off the whole antivaxxer thing for the dangers.

Right, rant over. I’ll crawl back under my stone.

*This was actually quite fun to watch with the kids. But the science bit - well the key is in the last word.

Not surprised at all.

It’s a very easy grape to enjoy on its own. Lots of sweet, warm climate fruit. It’s hugely popular in northern Italy too, for the same reason.

And while there certainly are “serious” examples, you’re very unlikely to find one in this country.

As I say, I do realise it’s not serious in its claim. But this sort of abuse of numbers is far too common,

They will all be jaguars clearly…

Oh goody! Another subject on which I can meaningfully contribute nothing!

The Baccolo is a real find at an amazing price, not much different from the ripasso valpolicella at nearly double the price.

On Nero D’avola, anyone tried the Society’s Salice Salentino 2015. Surprisingly, to me, with excellent balancing acidity.

The Salice Salentino Is (probably mostly) Negroamaro, not Nero d’Avola (which is only found in Sicily). Very different grape too! 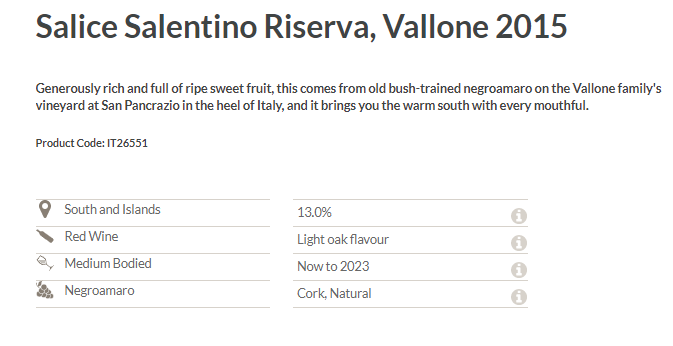 That explains the 2 who drive badly because they like a close shave.