Likewise enjoyed a burgundy case and “mystery new world fine” case back in the day. The burg case had a couple of 2004s which were not selling and I probably drunk them too early. I still have a Gosset Gaia from the New World case as this looks to need an eternity to be drinking. From my records they were purchased in 2012. Line-ups were:

I’m looking forward to finding out what you all get. All the excitement, none of the risk…

That was part if the problem in the burgundy/Rhone offers. There were some very fine wines in the cases, and as people posted online( at that time on the winepages forum) I went back for more in the hope of getting some of the very best stuff. Expensive but not in the end for the wines in question. I don’t expect these cases are in the same order but we’ll see.

Plucked for the £108 mystery case of 6. I’ll reveal all when it arrives next Friday!

Also popped in a Mac Forbes ‘Hugh’ following the zoom q&a…seemed a safe bet based on his excellent session!

I’d appreciate feedback on both the case and the Hugh, @Nowt_in_my_glass - thanks!

Zero risk. If you don’t like it, tws refunds all cost. Now tell me where else you get that? You can’t lose, at worst be slightly disappointed

Well, it’ll be well made for sure and I’m picking it up without tasting it, so i always think if i don’t like it (unlikely anyway) it’s just a part of wine. As long as i try to understand it objectively, the responsibility is mine.

With the case, i guess sending me something corked or out of drinking window is different, but as for the types…again, it’s my choice to put the selection in their hands, so the responsibility is on me

I’m with you on that; I only call on the TWS guarantee if I think the wine is faulty. Otherwise it’s all part of the learning experience!

So my £75 Lockdown Mystery Case of 12 Reds arrived today (no breakages from DHL). I can only find 6 of them on the website at the moment, worth £44…does anyone know how to find old wines when you don’t have the product code?

Decent selection of wines I’ve never tried before, and some I have and loved. Looking forward to trying the Moldovan and Croatian.

I happy with the lot, great to try something different, will definitely choose a mystery case again 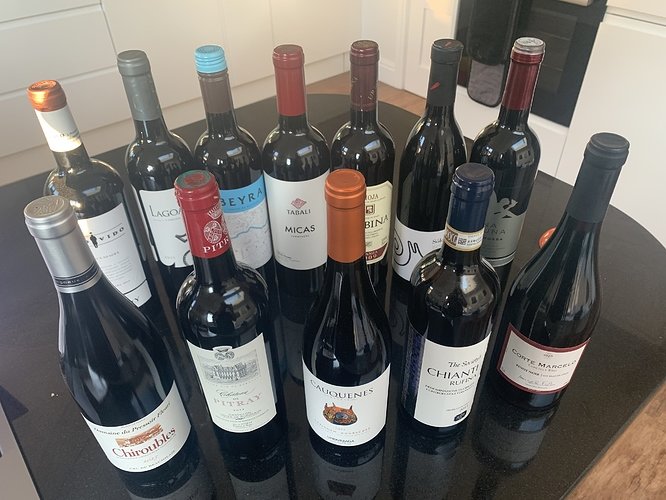 That looks like a a pretty nice selection for £75, worth considerably more than c£6 a bottle on any view I would have said.

Agreed, so far I’m impressed. Once again great value for money from the society

So my £75 Lockdown Mystery Case of 12 Reds arrived today (no breakages from DHL). I can only find 6 of them on the website at the moment, worth £44…does anyone know how to find old wines when you don’t have the product code?

Decent selection of wines I’ve never tried before, and some I have and loved. Looking forward to trying the Moldovan and Croatian.

I happy with the lot, great to try something different, will definitely choose a mystery case again

Try googling them, see if google cached the TWS page?

Thanks, tried that on a couple I couldn’t work out sadly no joy but might try different variations to see what happens

Well I can tell you the 2009 Urbina Crianza (if I’ve recognized it correctly) was £9.95 in 2016 when I bought it from TWS, however the end drinking date was given as 2018. That said I’ve drunk a good few bottles after the TWS date with no problems. I’ve almost always found their closing dates to be very conservative and it still seems to have been going strong in 2019 on cellartracker. It was a very good vintage so I’d be very happy at that (average) price. Also the Pitray is a good solid claret that cost me £8.95 last time I got it ('15 vintage).

Thanks @MikeFranklin the Urbina was great, I’ve yet to find a Rioja that didn’t still taste good beyond its drinking date.

Had the Pitray last year too and I’m glad it was included. Can’t go wrong at that price.

Urbina was great, I’ve yet to find a Rioja that didn’t still taste good beyond its drinking date.

With Urbina I’d go further and say they taste better once they’re “past it” in terms of published drinking dates. Even the Crianza is incredibly long lived. I tried the Reserva 2001 recently and I’d say that was slap bang in the middle of drinking window (the 1994 GR at the same tasting was surprisingly fresh, although definitely headed for retirement).

That sounds like a decent selection for the price.

I had rather assumed that it would include odd-bottle bin ends, wines with damaged labels, etc. and by the look of it there are some of the former in there - possibly because these would normally have appeared in the shop at a discount(?)

I would try Winesearcher.com
I am intrigued to see what members received.

More likely the latter, in all probability.
Bon Chance!!

Last year I bought a 1982 Urbina Reserva as my wife had never had a wine from the year of birth…it was spectacular.

Not a single damaged label…I was expecting that too. I’ve assumed they would’ve gone into the showroom bin end sale had it been possible during lockdown.

What I really like is I probably wouldn’t have picked up any of these searching through the bin end section but really glad I’ve got the chance to try them.