Muscadet: which to buy?

Muscadet… I really like. Not the supermarket stuff which is always the same & lacks character (although perhaps that is Muscadet’s character?) But I’m talking about the better stuff epecially Château-Thébaud wines which can easily hold their own against Chablis premier crus costing twice as much.

I was wondering which TWS Muscadet members would recommend, and why? - or equally - why Muscadet is not a regular choice?

I’m also a fan of muscadet and especially Thébaud. This one on the current list is really Good

Youthful, restrained and with crystalline precision on the palate, this is a special Muscadet. Made only in the best vintages and released after extended maturation in both vat and bottle, enhancing the wine's complexity while retaining its natural freshness. Please note, the labels of this wine...

I never buy Muscadet, but probably should. Thanks for the recommendation.

This one would make me happy

Rare Muscadet made from a plot of vines averaging 100 years of age, here in a ripe vintage, this wine is given extended bottle maturation for greater complexity without losing its inherent freshness and mineral tang. This wine qualifies for the new Muscadet Cru Communal status but it is so well...

We got back into drinking Muscadet thanks to Ch de Chasseloir a few years back after reading Simon Hoggart’s book ‘Life’s too short to drink bad wine’. Pretty good drop.

This is A staple in our abode. Really good value.

A generously rounded Muscadet in a vintage that gave wines in a softer style, better suited to richer shellfish and prepared fish dishes.

The clos Briords is his top cuvée

go on then - give us a link to a UK importer pls?

Depends on the Muscadet - and when it’s good it is very good indeed. Especially at £12+ (and often at less) - compare to Chablis or white Burgundy where a decent bottle starts at £15 or much, much more. But that’s just my opinion so I’m interested in other viewpoints.

I have these two at home and they’re great easy drinkers and especially with fish or shell fish.
The one on the left is from TWS and the right Lay and Wheeler. Both are good, have that zing and sharpness but the Herbauges is marginally richer .

I also bought for keeping , Meaireau Le Grand Mouton Muscadet a first also for keeping. I have high hopes for this in a few years maybe 3-5 years away. 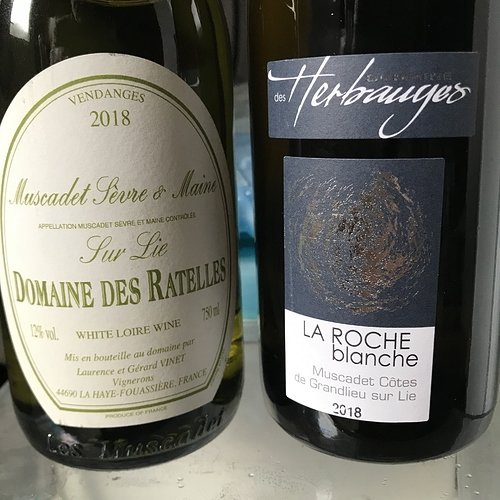 I had a (very jolly) wine tasting last summer to establish what my house white wine should be … the society’s Muscadet was the cheapest of the bunch and is, as the blurb says, the perfect all-rounder. I don’t have the resources to maintain an extensive cellar but with a couple of bottles of this on hand, I’m ready for whatever impromptu celebrations summer may (eventually) offer …

The perfect all-rounder. Serious Muscadet doesn’t stop with summer and beachside seafood feasts. Uncork the fresh, dry, stone-fruit charm of this Vinet family benchmark with spatchcocked chicken and oily fish, rubbed with herby oil and charred to perfection on the grill.

And the lady lapin is enjoying a glass of the ratelles this evening. High praise indeed. It’s not the finest white you ever might drink, but always very good.

Another vote from me for Domaine des Ratelles. It’s a wine that my tutor at West London Wine School chose as one of the tasting samples at the beginning of WSET level 3.
I used to drink Muscadet in the 80s and then the market seemed flooded with cheap Muscadet and the quality dropped. Perhaps overcropping, perhaps making hay while the sun shone.
But the Ratelles rekindled my love for Muscadet and, at that price, I think it’s unlikely you’ll be disappointed.