I had some at the weekend. @David007 is looking for wine for it now.

Love it, loathe it? What are your thoughts on mulled wine (I nearly typed mullet wine then!).

What wines do you use, what’s your recipe? As @CCouzens has just mentioned them, do you just use a supermarket version? Which one? Enquiring minds want to know??

For full disclosure, following some trying to get myself blogging again, I actually wrote about this at the weekend. This does mean I have a pre-made post though. The useful bits of my thoughts (i.e. the bits actually about making it!) are here:

I’ve learned over the years that when making stuff with booze, keeping the sugar and alcohol separate as long as possible is key, so I started by making a mulled syrup. Melting sugar with slices of orange and a pile of spices but don’t boil, we’re after a syrup, not a caramel (maybe I should try going for a caramel next time?!?).

Then I poured over the wine, turned off the heat and left it to steep for 20 minutes (again no with the boiling, we’re aiming for steep, not stew) and then finished it with a good slug of brandy. 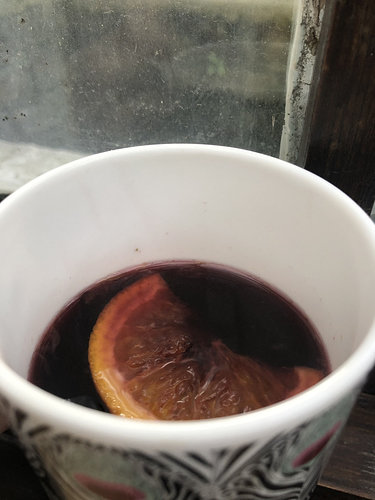 I’m sure this is supposed to be a nice glass and a cinnamon stick with some tea lights in the background, ah well.

The results? Less than the sum of its parts.

It was noticeable better, though I’m not sure it was worth the effort vs the everything in a pan. It’s tasty and made both lovely girlfriend and I very happy. Maybe that’s the key to mulled wine. It’s not a great gourmet thing, but it does bring much joy.

Recipe (note amounts are very approximate!):
150g golden caster sugar
One orange
4 cloves
2 star anise
1 supermarket sized cinnamon stick
3 slices (a couple of mm thick) of fresh ginger
4 allspice berries
5 black peppercorns
1 piece of mace that I happened to find while looking for the allspice
bottle of (good? maybe not!) red wine
A slightly less generous glug of brandy than I used (you could also use rum, amaretto or anything else vaguely festive)

My partner is of german descent and her family recipe for Glühwein is very similar to the one you set out above @strawpig. I’d agree that a syrup is definitely the way to go if making from scratch. A couple of Xmases ago I tried a Danish recipe for Glögg (umlauts abound when it comes to warm spiced booze!) that involved macerating the fruits and spices for a week. Much more faff and I couldn’t detect any meaningful improvement in the end result…

I must admit that for just two of us this year the approach we will probably be taking is to buy a ready-made bottle from Lidl, and nuke it in the microwave a glass at a time before adding a generous tot of amaretto. This has reminded me to add a bottle to the shopping list!

My rules:
-do it properly or not at all. Homemade only please!
-mulled cider is far superior to mulled wine

Hahaha! @strawpig, this a is a joke right? to quote the erstwhile USA tennis man-child ‘you cannot be serious’.

My solution/recipe has been on pause due to the lack of the vital ingredient for several years. However it is now back on the shelf in Waitrose so here goes. Mix red wine with Winter Spiced Berry cordial to taste then heat. Add a dash of spirit if more oomph required. That does the job nicely if mulled wine required which it rarely is at our house. Otherwise the cordial is diluted with hot water for an alcohol-free mulled drink in which no wine had been harmed😊 If, like me, you were brought up on hot Ribena or Vimto this is like a liquid walk down memory lane. And very comforting.

Love it, loathe it? What are your thoughts on mulled wine

Loathe it. I’d rather have a straight non-messed around wine.

‘you cannot be serious’.

For those who bought the mulling syrup the Society used to sell, it’s made by these folks:

Me, I just buy it in the bars at the ski resorts! Maybe not this year, though!

I just remembered that when we were holidaying in Burgundy a good number of years ago we came across a Kir Cardinal which was a Kir but made with red wine rather than white. We gave it a try and thought it a bit ‘meh’. But that was in hot weather - maybe a winter apero, a mulled wine without the heat/mull/ spices🤔 So maybe not then🙄

I have the perfect wine to base a mulled version on.

My Auntie Flo’s Damson, Parsnip and Turkish Wrestlers Jock Strap 1976. I think there’s a couple of bottles in the garden shed if anyone wants to pop round after lock-down for them. They do tend to solidify but a couple of mins in the microwave should sort it (and you are going to heat it anyway).

Only kidding folks, it’s just not my cup of tea and I couldn’t resist a laugh (so I hope no-one takes it the wrong way

I would suggest that anybody who gets the chance should try the Gerstacker Heidelbeer Glühwein, ideally served at the Nuremberg Christkindlesmarkt before lunchtime and in sub-zero weather. To be followed up with some good Nürnberger Rostbratwürst, naturally.

I had the luck and pleasure of celebrating a number of yule tides in Germany with friends, and like you, many a Glühwein had been consumed in many a Weihnachtsmarkt. Berlin was the most recent, gut warming Glühwein accompanied by the ubiquitous currytwurst…

I used to get to Berlin a lot and I remember that when it was cold and snowy, people at Mauerpark would set up little Glühwein stalls. It was just the nicest thing, wandering around with a wee carton of it, looking at the stalls, breath hanging in front of me. I vote yes for Glühwein and all such. It’s a different drinking experience.

I remember writing a piece about Burgundy and visiting the vineyards during the time when they were pruning. We were invited to partake of a plastic cup of warmed passetoutgrains and a Madeleine cake served from the back of a white van amongst the vines. Best mulled wine I’ve ever had!

A theme emerging here is that enjoyment of mulled wine is more about the occasion than the drink itself.

My Auntie Flo’s Damson, Parsnip and Turkish Wrestlers Jock Strap 1976. I think there’s a couple of bottles in the garden shed if anyone wants to pop round after lock-down for them. They do tend to solidify but a couple of mins in the microwave should sort it (and you are going to heat it anyway).

Trust me @CCouzens, it would have to be a hell of an occasion. My own wake springs to mind and then at least I would be spared!