You have got me thinking - can you have a vegetable rogan josh?

Technically probably not, but I happily make veggie Bolognaise, Lasgne, rogan josh and many others! My Rogan Josh has aubergines and paneer cheese in it and is lovely!

I bought 2 bottles of this, found it very elegant with the first bottle, really enjoyed it. How long do you think before opening the 2nd, cellar tracker has an end date of 2028?

This here over the last two days and paired with the same meal on both, a pheasant breast in a creamy mushroom sauce, steamed green beans and new potatoes… 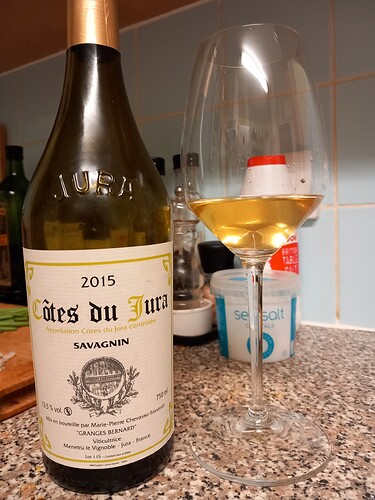 Half a bottle was decanted yesterday morning as, to my mind at least, it’s a style of wine that definitely benefits from airing and the remaining half (in bottle) finished tonight.

A burnished golden yellow colour. Flor, wet walnuts, spice, green apple peel and citrus on the nose. Stewed apples, lemon, walnuts and an oxidative, yeasty, quality on tasting too. Steely acidity provides lift and cut to the deep, savoury and complex flavours. Individual, characterful, full of personality and, as expected, a wonderful match to the food. Happy days, food and wine-wise anyway !

Many thanks to @Inbar for her recent and wonderfully descriptive notes on the Jura Chardonnay from Domaine Carlines, presently listed, too. Which is now a shoe-in for my next order

Probably not actually, they mostly will have their own veggie dishes with their own names, though no doubt they in turn will be very similar to other meat dishes. My understanding is that most Indian dishes tend to be very localised anyway and we’ve just adopted a specific subset here in the UK.

It’s been a tough week, so it’s time to celebrate Friday Eve with Honey Mustard Cheesy Chicken, accompanied by one of my favourite Fleurie. Vibrant, fresh and flavoursome. 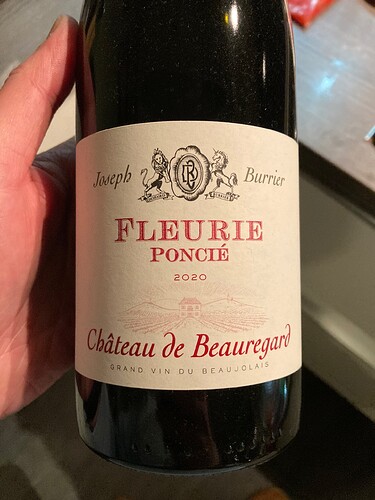 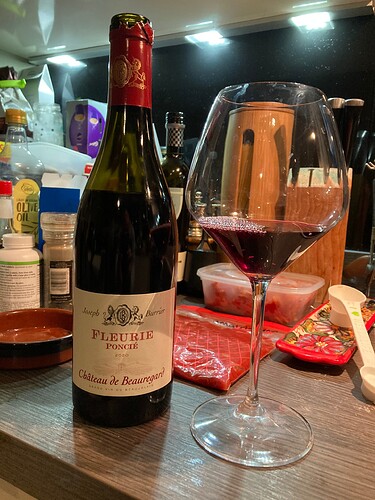 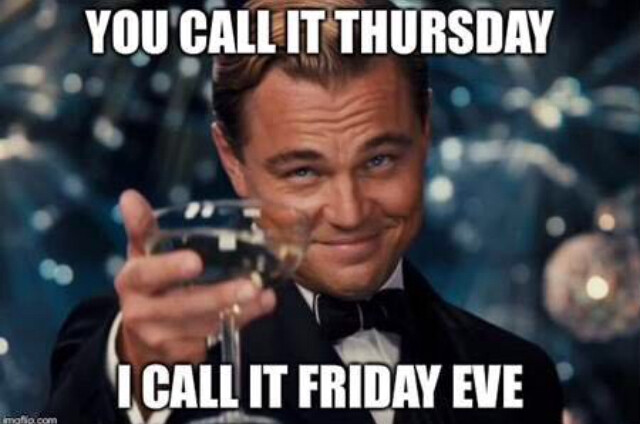 Very strange. Decided to have a Covent Garden mushroom soup which was close to its best by date, but getting further from it, and then thought I’d open an M&S Langhe Nebbiolo 2016.
Well, beautiful cherry aroma on opening, and in the glass, but a weird absence of flavour. It leaves a slightly tannic dryness in my mouth without tasting of anything much in the process. Perhaps I need to give this some air time - at the moment I’m quite baffled.

About 15-20 minutes after opening: still smells great, still is quite dry in the mouth, still doesn’t taste of anything. This is a very strange wine, much more of a feeling than a taste. Nothing unpleasant about it but I remain baffled.

Where did you get this from, out of interest? It sounds fascinating

so most enjoyable for a wine nightcap. 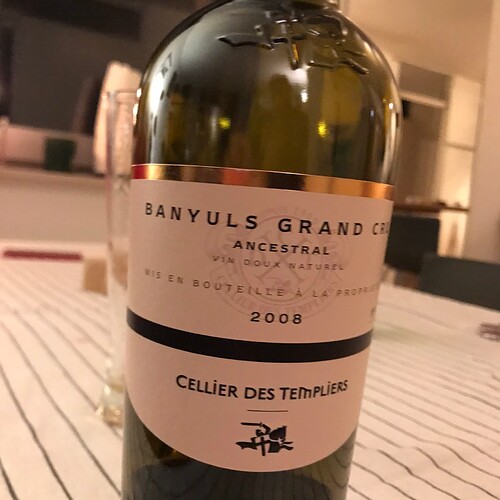 Cherries, cherries and more cherries. Delicious. Never drank a Banyuls until this year…quite an eye opener.

Most enjoyable for a change.

I’d give it another year personally. Maybe longer. Just a guess here though. The nose I think may develop further again.

can you have a vegetable rogan josh?

Why not? Rogan Josh generally refers to the manner of cooking.

As that infallible source Wikipedia has it:

A number of origins of the name have been suggested. Roughan means “clarified butter” or “oil” in Persian and Hindi, while juš (alternatively romanised josh ) means to “stew” or “braise” and ultimately derives from the verb jušidan meaning “to boil”. Rogan josh, by this definition, may mean “stewed in ghee”.

An alternative etymology is that the name derives from either the Urdu word roghan ( रोगन ), Urdu (روغن), “brown” or “red”, or the Kashmiri roghan , “red”, along with the word either for “meat”, ( gošt ) often romanized as “rogan ghosht” or “gosht” or a word meaning “juice”, giving possible meanings of “red meat” or “red juice”.) The exact etymology remains uncertain as both “rogan josh” and “rogan ghosht” are used to refer to the dish and it is unclear which of the names is the original.

You’ll be needing one of these

I’ve already got the t-shirt 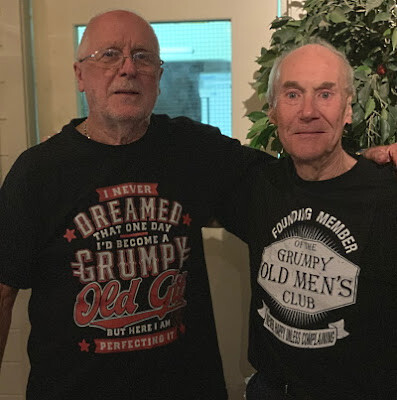 I’m on the right

Rogan josh also spelled roghan josh or roghan ghosht, is an aromatic curried meat dish of Kashmiri origin from the Kashmir Valley of Jammu and Kashmir, India. It is made with red meat—traditionally lamb, mutton, or goat—and coloured and flavoured primarily by alkanet flower and Kashmiri chilies. Wikipedia 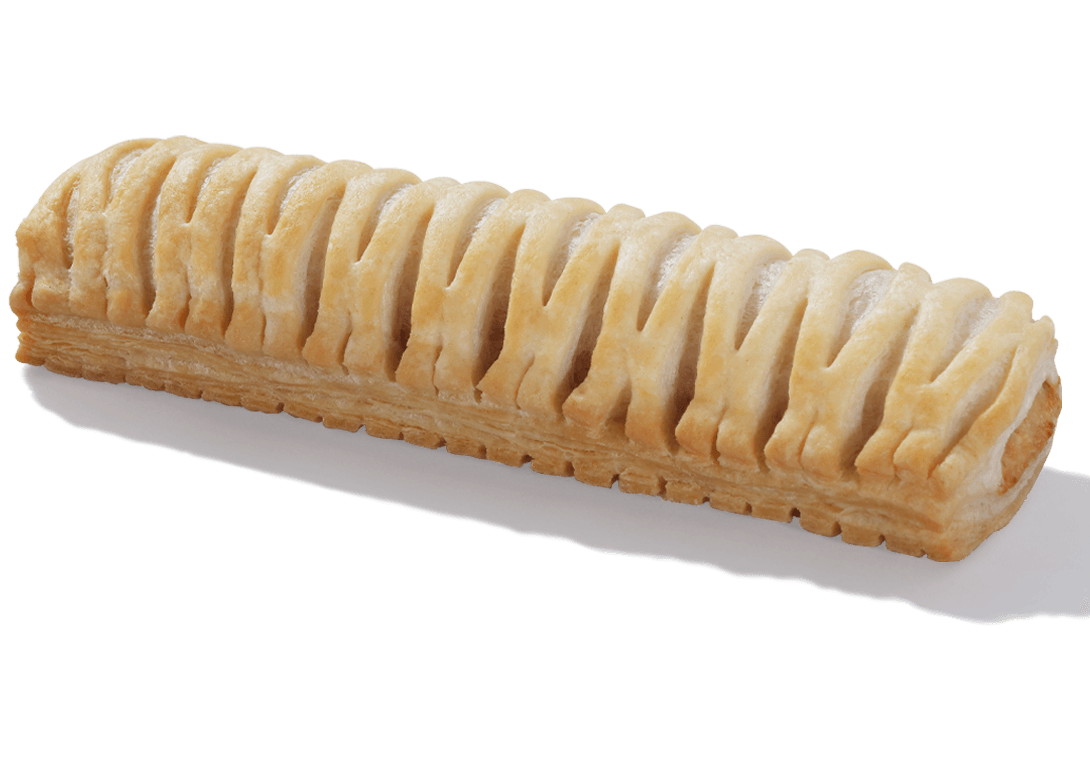 Deliciously light puff pastry with a seasoned Quorn filling. The most hotly debated sausage roll since, well... the Sausage Roll. Unless you were living under a very large, very heavy rock for most of 2019, you may have noticed we rustled up some...

Vegetarian rogan josh isn’t such an aberration really, is it?

we’ve just adopted a specific subset here in the UK.

More than that, I think. First, most Indian restaurants aren’t run by Indians but by Bangladeshis.

The first ‘Indian’ restaurant in an area will spawn a second as a waiter and/or cook goes off and opens their own restaurant using the menu and recipes of the first, and then a third will open and so on. All - or mostly all - the Indian restaurants in a town will have similar dishes from similar menus.

Go a to a town a few miles distant and the Indian restaurants there will be different but all in that area will be similar, for the same reason.

I realised this when spending weeks in different towns for my then employer.

Now there’s more similarity because of the use of commercial sauces, rather then home-made ones.

@andy999 on that basis, one can’t have a chicken or prawn rogan josh. No one has told the restaurants in my area!

I agree - I’ve also noticed on my travels that lots of towns/regions have their distinctive style of curry. I’ve had an occasional dud but 99% of curries I’ve had around the UK and Ireland have been delicious, and I love the subtle differences you get from place to place.

Never thought about it in terms of local families/restaurants branching out to open what are effectively spin-offs nearby, so your explanation clears up something that’s always intrigued me!

Reposting from another thread:

A bunch of us got together yesterday to drink Italian wines from Tuscany at a pugliese restaurant in Islington. The theme of the evening was Tuscan Treasures and indeed the event was full of treasures. A lot of wine was consumed. To add insult to the injury, one of the most idiotic members of the group had the brilliant idea to bring a bottle of Grappa (Tuscan, of course, 100% Sangiovese). The conversation flows freely during these events and you do learn a lot. There are some heavyweight co…