I’ll get the ball rolling this week then… 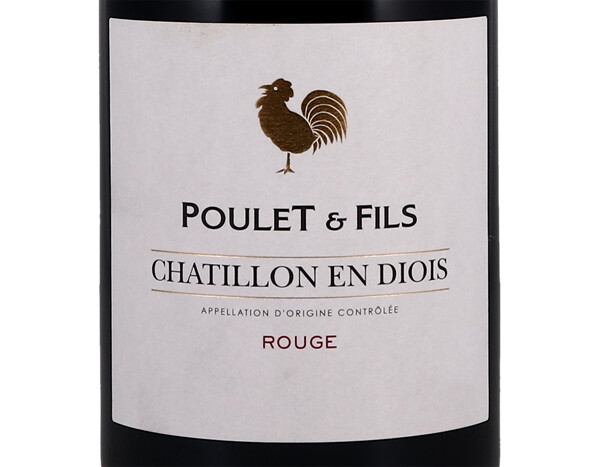 Stuck at home with thankfully mild and non palate killing covid. I’ve opened this. Very classy and intense Gamay that is quite unlike any Beaujolais I’ve drunk. Elegance and concentration in abundance. Really delicious and sappy! Dark as a many a Syrah.

Could have mistaken it for a high end Mencia blind, which is no bad thing either.
Back in my basket straight away, bet their fizz is great too!

I’m still unsure, after drinking. There are both similarities and differences. This may be bottle variation, vintage variation, or more probably, memory variation, but it could also be because they are different wines. Possibly that the Vignes Retrouvées is the better cuvee, made from older vines or the better pick of the grapes. This Cépages Préservé was good - the same pineapple and pink grapefruit refreshment as the other, but it just seemed a bit tamer and calmer.

I seem to recall that the Vignes Retrouvées was a bit shocking, like being slapped around the tastebuds with a pineapple, then having a pink grapefruit shoved in your mouth, in a really, really good way. This was more like being tickled by a fruitbowl.

Producteurs Plaimont produce a bewildering array of cuvees - they are effectively a single-operator appellation - so much so, that even their website is never comprehensive at any one time.

The only speculation I can add is that it’s possibly younger vines, or indeed even younger winemakers, who are following the recipe (so to speak) of the Vignes Retrouvees, but are yet to be elevated to it’s status. Frankly, they’re up to that much, sticking a pin in it might give you as reliable an answer!

Well that sounds like something I need to try!

You certainly should, the Vignes Retrouvees is one of the best white wines under £10 that I’ve come across. Hope you agree!

It even made my son, who will often just hoover up unthinkingly, sit up and take notice.

The only info I can find is as follows:-

The cuvée mentioned in the section comes from the blend of the 3 terroirs of the Appellation: calcareous clays and, even more, variegated clays and tawny sands. The plots have been selected on the most beautiful cool locations in the appellation (north or west exposure) to express all the tension and aromatic exuberance of Saint Mont Blanc wines.

Edit: Which suggests to me it’s more related to PP’s ‘Grand Vin’, Cirque Nord, than to the Vignes Retrouvees. All of which is idle speculation on my part.

Tonight was going to be a dry night, but after a hard day’s decorating I decided to open an Albarino to go with baked mackerel and new potatoes. Not that hard a day I suppose but it’s the cutting in that gets me!

Do Ferreiro Albarino 2020 which I think came as a substitute in my Christmas whites case, but which doesn’t appear at all in my wines unfortunately. Unusual aroma on opening, like walking through a pine wood clutching a bunch of lemons (you know you have!). Drinking, it doesn’t have any pine flavour at all, just slightly salty, minerally, lemony, and a sort of soft acidity. I don’t recall ever drinking a bad albarino, and this is another one that offers a pleasant and refreshing glass or two, or… 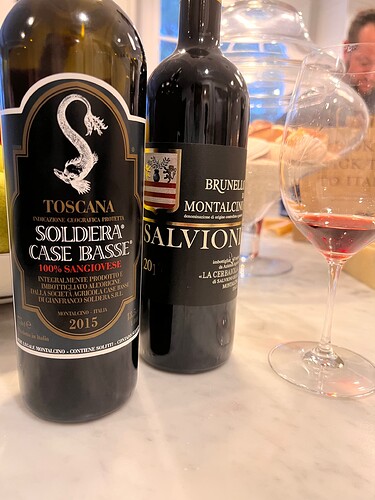 Some knockout Sangiovese last night with some friends over in NYC.

No-wine blues to report - we washed up in Mollendo - a fairly lively and interesting seaside town looking for some seafood - in particular the “famous” Pacific sea bass - with an oddly wine-sounding Peruvian name; Corvina. This is “corvina a lo macho”, battered sea bass with a spicy seafood sauce. The only wine on offer was white or red Borgogna - sweet hybrid-based so no thanks, but the local beer was fine.

Much more to the apex of my worries is today’s national hauliers’ strike Paro de transportistas lunes 28 de marzo EN VIVO: últimas noticias, pronunciamientos de gremios, motivos y todo lo que se sabe sobre la paralización | alza del combustible | Sociedad | La República - set to continue indefinitely which means road blocks (currently no less than 3 in place on our planned route tomorrow) and in due course, fuel shortages. Our car was ambushed on the road at a demonstration and daubed with “Viva el Paro”; long live the Strike. I think we’re going to be pretty much stuffed from tomorrow. But what can you do. 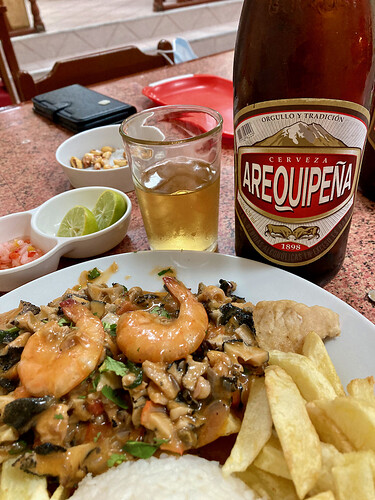 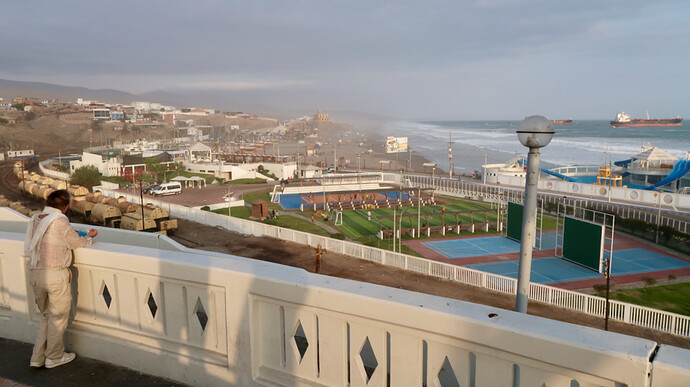 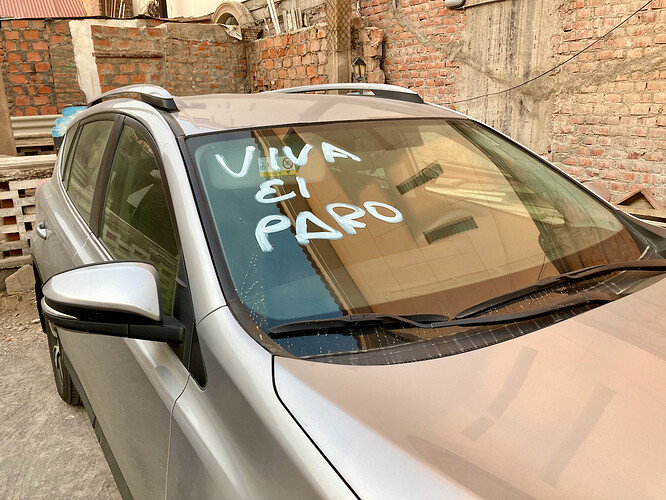 Spending a few days in Norfolk, starting with Norwich. Had a lovely suppler at the Rooftop Gardens looking out over the Cathedral and was delighted to find the Simpson Estate Rabbit Hole Pinot Noir on the wine list, which I have been meaning to try for a while. It was delicious - immediately ordered 6 more from TWS.
https://www.thewinesociety.com/product/simpsons-rabbit-hole-pinot-noir-kent-2020
Medium plus red centre, medium red rim. Medium plus nose. Ripe berry fruit. Black cherry, strawberry. Notes of roses. A little dark chocolate, vanilla and spice. Medium palate. Juicy ripe fruit. Fresh acidity. Soft, ripe tannins. Dry. Cranberry, cherry, strawberry. Nice vanilla and tabacco notes. Long, lingering finish. Delicious wine that stood up to a selection of starters we choose to accompany it.

Sorry to hear about the potential (probable) disruptions to your road trip. I hope the strike is resolved and you’re able to get where you had planned. For how much longer are you in Peru? 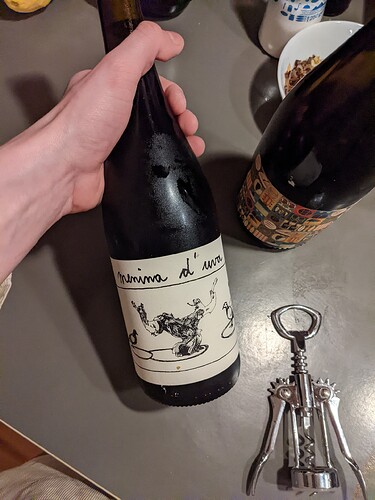 Great to read your review, @Robin63! I’ve been meaning to try it for a while now too, and a bottle has been sitting in my basket. I’m now definitely going to include it in my April order

Thanks. We’re here for another 2 weeks or so, on the road most days so we’ll need some luck along the way. Trouble with Peruvian roads is that there is usually just one viable route to choose between two points. If we can get to Yanque hot springs and sip chilled chardonnay this evening I’ll be sure to post the evidence !

Hoping for some suggestions: I want to treat myself & order from TWS a decent bottle to drink at the weekend - hankering after Red Burgundy. Will need to get my order in sharpish, £40+ ish the bottle.

Background: I’m self employed (commercial interior design) and it’s the end of my financial year, 2021/22 has been an absolute pig. Key decision makers on furlough, materials unavailable, timescales & contractors all over the place. Yet I have been busy as hell chasing loose ends, not a year I (nor most folks) would wish to repeat.

So I’m after suggestions for a bottle of wine that will make it all feel worthwhile! - sad but there you go.

That price falls between stools I think in Burgundy.

Now that looks very interesting! I wouldn’t have thought of a German red. Do you think it’s ready to drink? certainly looks like what I’m after.

I have been tempted by this one from Alsace - but don’t wish to pay for a pig-in-a-poke.

I’ve had the Mure but not sure which year.

[edit: it was the 2013 back in 2017 and I thought it did not have enormous longevity so that’s another factor]

I think its a little over-priced.

DK if the Kunstler is ready but reckon if you have 2 halves you have some optionality.

timescales & contractors all over the place. Yet I have been busy as hell chasing loose ends, not a year I (nor most folks) would wish to repeat

I suspect this this sounds familiar to people in most other industries too. Not a year look back fondly on!