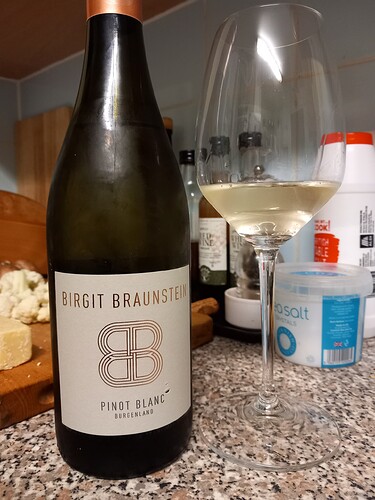 A fresh and inviting nose of orchard fruits and green apple peel with a hint of mealy lees. Very much the same on tasting. Green apple and pear flavours to the fore with the lees adding some chewy texture and a bracing mineral quality to the clean and pure fruit.

No doubt, it would be better suited to seafood than my artery clogging school dinner but, that said, the apple flavours went well with the sausages and its freshness the zip to cut through the fat in the cauli cheese… 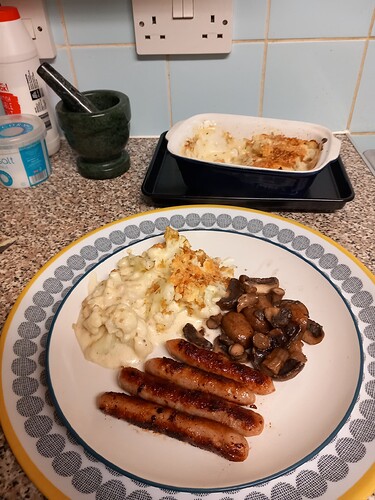 Enough of my waffle, what’s in your glass this week ?

what’s in your glass this week ?

Only a glass of water for me tonight

Sorry to hear that !

BTW, perfect timing though, I was just about to mail you

Enough of my waffle, what’s in your glass this week ? 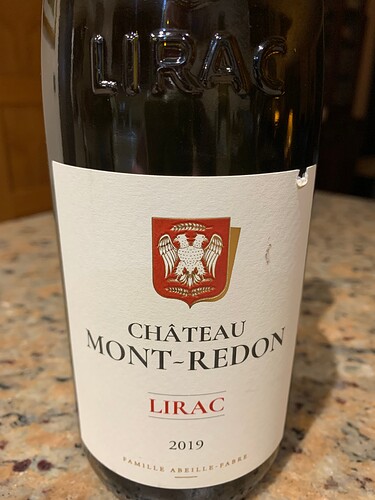 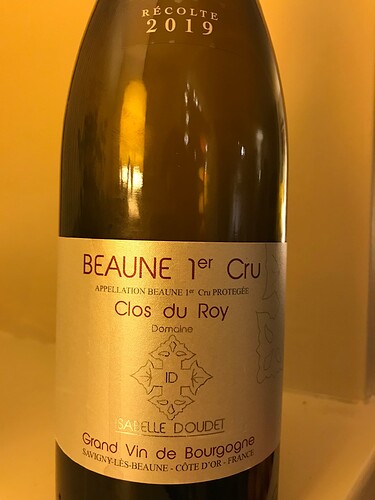 To my shame I’m not sure what I paid for this, not cheap though.

An interesting evolution. On opening rather top heavy on the fruit and finish with a very noticeable hole in the middle, really vague and vacant. Also that raw meat thing which I associate with over production. But wait for it, the hole started to close over, the intensity grew across the palate and it started to remind me of a decent Gevery. Which I mean as a compliment, or more likely climate change. But whatever I am pleased with this. With food it sang.

I wonder if this lot is anything to do with Doudet Naudin (sp?) which I remember of old. I will look into it.

Monday is often a low point in the dinner stakes but tonight a half rack of venison seared and then roasted in the air fryer. Together with a half bottle of Gigondas Domaine Saint Gayan ‘Origine’ 2016 from Yapp: a very good start to the week!

A glass of Domaine Bellavoine Bourgogne 2019 last night by Coravin with the remainder of weekend beef.

It was very good too. Pure primary red fruit with some ripe sweetness, a little hint of sour cherry and tannin. Acidity just about right. Just what a good basic Bourgogne should do and more. Sadly this is the last bottle. I had 3 and all have been very good. Hope to see it back on the list soon.

I do seem to be on a bit of a Bordeaux run at the moment with two tastings and in between? Why, another Bordeaux of course! So I opened one of the Chateau Poujeaux 2005s that I picked up in Chamonix last April: 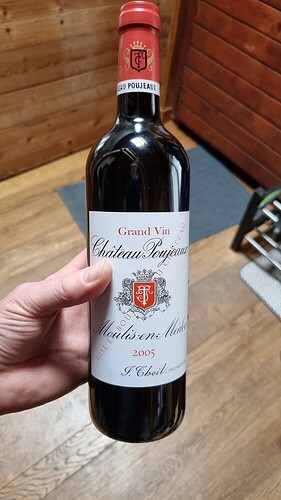 image562×1000 53 KB
And it is just sublime! Velvet in the mouth, elegant and balanced with plenty of fruit and tertiary stuff going on. This is what I’m always searching for with Bordeaux but it just requires so much patience to find it.
22 Likes
lapin_rouge November 29, 2022, 4:55pm #9

Likewise, Monday also Pinot noir - mainly because I am doing a Bordeaux tasting Tuesday & didnt wish to have an entirely BDX week.

Very ‘New World’ - in a good way. I wonder sometimes if it’s a deliberate stylistic choice of the winemaker, or if it’s a function of terroir, climate, vine clones? No doubt there will be WSET papers out there explaining it all.

Anyway: New World P.N. dark & concentrated with a good helping of farmyards & bitter cherries, lots of fruit, a touch of oak but very restrained. This is a very poor analogy, but imagine a cote de nuit, made in the style of a St Joseph Syrah.

I have a spare bottle which will be set aside for a few years (if possible) to see how it develops.

A 2014 Poujeaux was drinking similarly well earlier this year.

Drinking beer while watching the footie. First something called “Birthday Suit” which was okay. Described itself as having an “aromatic floral aroma” which seemed like a word too many to me. Already forgotten it, but it was quite drinkable.
Now drinking “Wold Gold” which comes from near Driffield, just up the road, so is inherently much better. Dry, hoppy, a slightly perfumed taste with a hint of citric peel on the finish.
And the football turned out pretty much as expected!

Excellent indeed particularly at the price.

I really enjoyed some Château la Colombiere Negrette several years ago at 28-50 and again from St Johns restaurant. This takes me back to that. Simple, fun and tremendously enjoyable but with a good character to it also. Incredibly enjoyable. 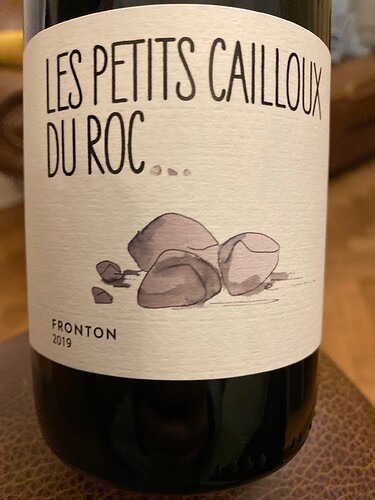 I also noticed it was amongst Victoria Moore’s best wines for Xmas last weekend.

I’m pleased for them it’s taken off, Dom de Roc is a fabulous little family operation and we’ve called in a few times over the years, but this last time was the first since Anne fully took over.

Here’s ToH with Frederic, Anne’s father, (now taking a back seat) from one of our visits; in 2013, and the grand sweeping entrance driveway and their magnificent Palladian-style outbuildings. No expense was spared. 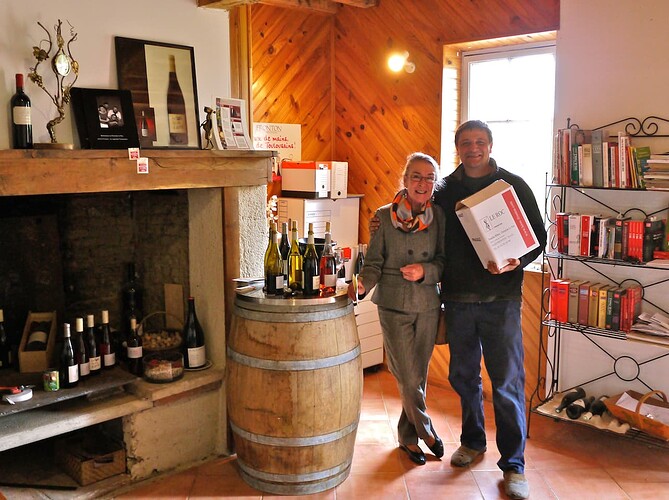 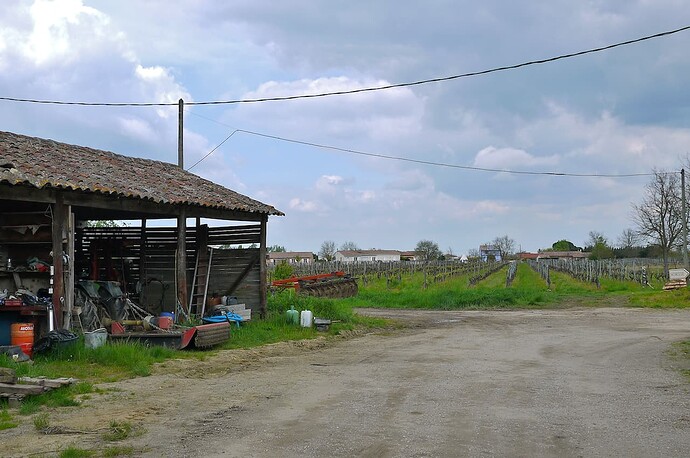 Nice. I’d buy based on short term consumption amounts. I have found Negrette can close down/fall off. This is only my last experience following up with a case of 12 from the enthusiasm from 28-50/st johns last time.

Happy to be corrected?

Here was my last (lack of) enthusiasm was down to where the Negrette was in its ageing journey. Initially the case of 12 tasted completely vanilla almost supermarket french wine with no character. Then a year later opened up. It ended up getting quite meaty and coffee noted in time.

The latest in the (not so) occasional series of @strawpig goes to a more expensive wine dinner than he should at Trinity Clapham.

Venison and Piedmont. I really couldn’t miss it.

After a negroni and some nibbles we kicked off with Dolcetto d"Alba Benevelli 2020 served with Cep Tortolini in a creamy sauce with autumn truffles.

The Dolcetto was very much in it’s “If beaujolais were northern italian” vein, with sweet red and dark fruit and a slight savoury, almost bacony funk. It worked very well with the truffles on the pasta which added an earthier dimension. In terms of wine and food lifting each other, this was the best pairing of the evening. 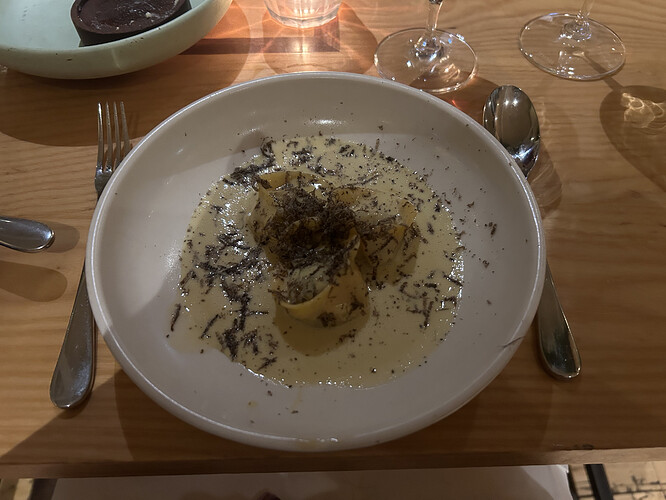 Slip sole with hazelnut butter and raw chestnuts serves with La Raia Gavi Riserva La Madonnina 2017 (from a Jeraboam!). This was not your average Gavi to say the least. Think a PC Chablis of a similar age and you’re not far off the mark. Rich and mineral, but with delicate floral and subtle stone fruit undercurrents. Very persistent length. Om nom nom. 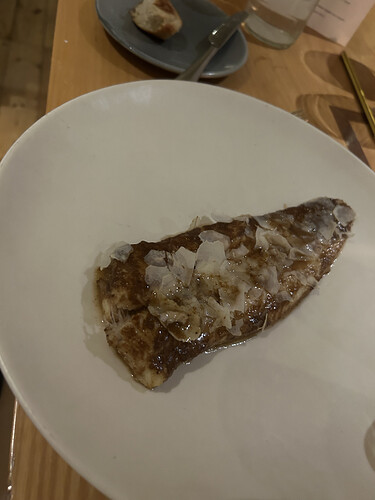 Who killed bambi? There was a whole saddle of red deer served with apple sauce and a celeriac gratin for the main. 2018(!) Barolo Conterno Fantino “Vigna del Gris Ginestra” in magnum. Young? Sure. Drinkable? Very. Dark and brooding with a heavy marzipan aroma on top of the cherry and herbs. I’d like to say it carried on on the palate, but that’d be doing it a disservice. It had so much going on that was already so well integrated that it was hard to pick individual things (other than the almonds) out at any one time. This is a very classy wine that was genuinely delicious now to the point of getting me to reconsider my attitude to Barolo and the need to age it. Intense, complex, complete. Another eye opener for very different reasons. 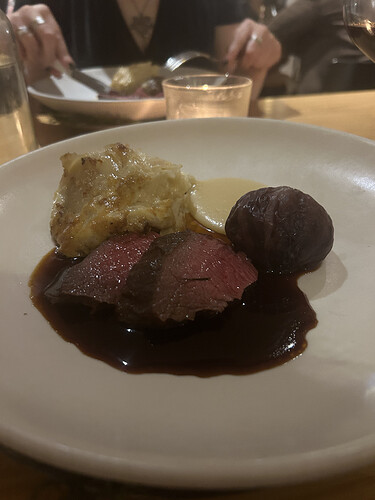 A wonderful chunk of aged beaufort cheese with pickled pears served with a 2018 Barbaresco Cascina Delle Rose Tre Stelle. Unlike the Barolo, the Barbaresco did feel a bit young when it was on its own. With the fat of the cheese to calm it down it became much more rounded with classic elegant cherry-menthol notes and a floral finish. 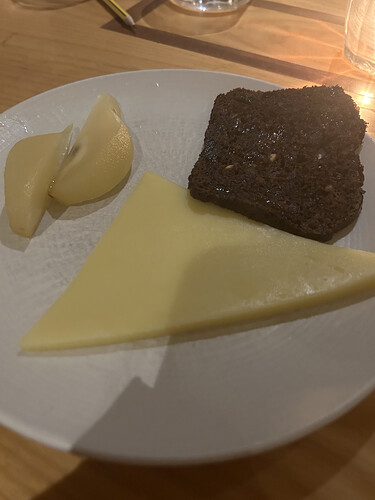 I have a feeling pudding went wrong. It wasn’t the advertised pumpkin custard tart (it was however the Trinity salt caramel tart, which is all of the nom) with a Moscato d’Asti from Vajra. Light, fresh and everything you want from a Moscato d’Asti, but nothing particularly ground breaking or earth moving.

Clearly objectively the Barolo was the nicest wine of the evening. However, I was so blown away by Gavi being able to be anything more than the standard Gavi di Gavi’s I’ve had over the years that it’s also difficult to not say that. Either way there was some stunning food and wine had! 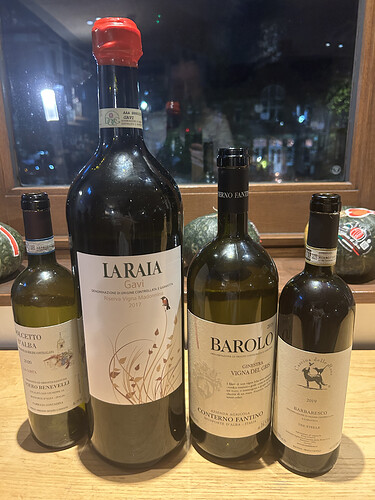 Back on home turf after a lovely break in Bruges - my, what a city!

For dinner, chicken stuffed with mushrooms and Comté (a Rick Stein), and though a Trousseau might have been more apt for a red, I decided to veer off to nearby Switzerland instead: 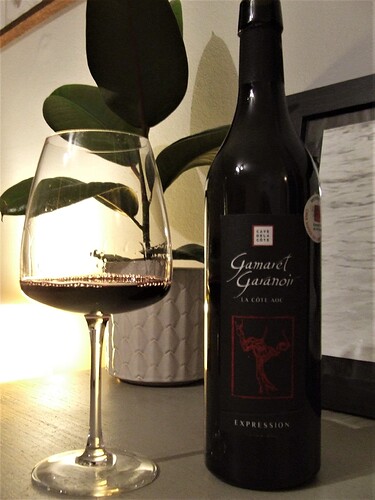 These sibling grapes (both a crossing of Gamay and Reichensteiner) are often blended together, and make for a lively, spicy, berry-fruited and floral sort of a wine. Each grape brings something slightly different to the mix - not unlike siblings in a family, I guess. Last vintage we had was the 2017, and this 2019 seems to have a bit more oomph and heft - though it continues the theme of joy and berries. Or maybe I have Christmas on my mind.

Pretty violet hue in the glass, the nose has floral notes of iris and dried rose petals which wrap around ripe dark cherries and damsons, with a twist of cinnamon or maybe nutmeg. The floral note continues on the palate, mixed with delicious fruitiness (mulberries, dark cherries, blueberries) a hint of dark chocolate and a finish which - to my palate, at least - has a spicy Szechuan pepper sort of vibe. Texture is rather creamy but the medium and fresh acidity keeps it light on its feet; tannins are mellow - more of a background note which complements the whole.

Comparisons with a Beaujolais Cru always come to mind (Fleurie, in particular), though price of course isn’t comparable. Still, Swiss wine always feels like a little bit of luxury to me, so entering Christmas mood slowly but surely…

Happy Wednesday to all!

After a couple of rather decent TWS Bordeaux tastings, I thought it only fair to put my learning into practice. So this evening Ribeye Steak & Chips plus onion rings (not just any chips, these are from my home grown pink fir apples) with 2013 St Estephe Château Tronquoy-Lalande from a recent Majestic mystery case.

The St Estephe is from a so-so year (2013) yet after an essential 4 hours decant is drinking very well indeed, plenty of ‘grip’ & very food friendly, although there’s no getting around the slightly green / stalkiness. Perfect with Steak Frites and dare I say it, quite Parisienne. 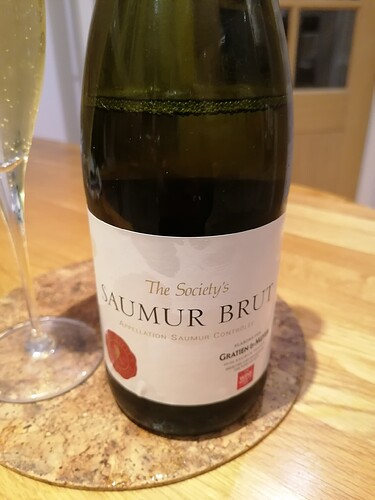 Enjoying this Saumur Brut. A sort of appley take on champagne. Very fizzy on opening, in fact almost explosive, but doesn’t hold on to its fizz for too long in the glass. Fortunately drinking it quickly before it goes flat is not too much of a struggle.

Enjoying this lovely, mini-Volnay, while watching Poland vs. Argentina. 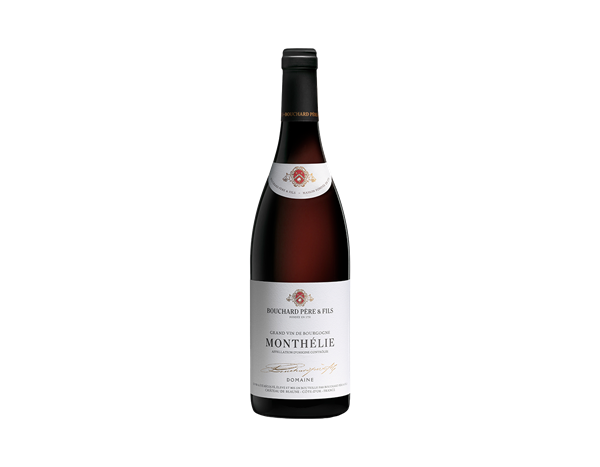 This is a relatively simple Burgundy but none the worse for it. Elegant strawberry fruit, just the right degree of acidity, a bit of spice, all combining to achieve some complexity and very good balance. A really lovely wine.

Probably a good choice for those who have previously struggled with Burgundy or newcomers to the region, given its accessibility. I really enjoyed this and will certainly be ordering more.

This wine (decanted as per @Toby.Morrhall ) was delicious with cauliflower cheese this evening. 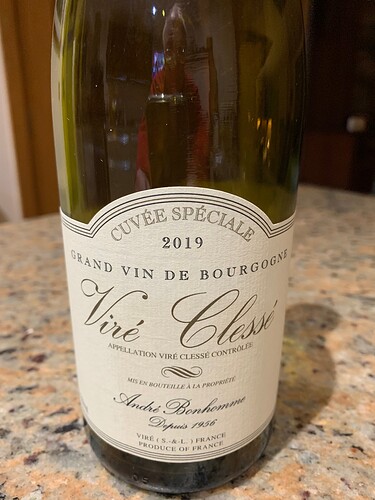