A day of hard work and dreadful weather call for a jolly, light-hearted sort of wine - so we opened a 2018 Arbois Poulsard/Plousard from the Jura: 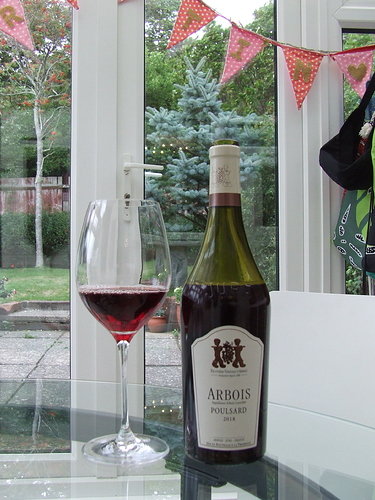 Made by one of the most important Co-ops in the Jura, this is the epitome of easy drinking - but with a lot of interest! Very pale in the glass (and I do mean very pale!), the nose offers hints of autumn bonfire, bramble, boiled sweets and a touch of spice. On the palate it has savoury elements (a touch of medicinal and spicy notes) but also has nice sour fruit - a bit like summer pudding; tannins are discreet, and acidity is quite pronounced but balanced and appetising. There’s a touch of bitter peel on the surprisingly persistent finish.

I’m making hot smoked salmon pasta to go with it, whilst marvelling at what 50 miles per hour wind looks and sounds like. Yikes!

Looking forward to reading what others are drinking this week… Chin chin!

First day since March 18th when I’ve left the house for work! Usually I’m on the road everyday so it’s been a weird few months but today I actually drove further than ten miles to see a colleague! Had a fab day and it was great to have a change of scenery.

I opened this tonight as I fancied a juicy, warming red on a miserable evening in North London. This is the last of a supplier supported/discounted 6 bottles, such a great wine. Lots of jam, plums and just about perfect for a wet and windy Tuesday night. Wish I’d bought more! 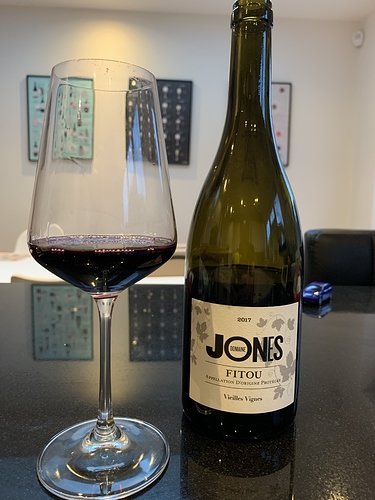 I opened this tonight

Have spent last week dry for no particular reason, yesterday I had the afternoon off work.

We ate out to help out and went for ALL YOU CAN EAT CHEESE at Pick&Cheese in Covent Garden. It was strange walking through Covent Garden as I couldn’t tell if their were a lot more or a lot less people than I was expecting. Either way, there were people.

The all-you-can-eat cheese on a conveyor belt actually lived up to the hype (especially at £10 a head with the government money). All british cheeses with some rather left field accompaniments (the strangest being a Cornish Gouda paired with salted caramel fudge, my favourite being Rollright (basically a british take on Vacheron Monte D’Or) with what I think was a Crinkle Crunch biscuit).

Wine wise this was all washed down with a bottle of Judith Beck Blaufränkisch 2018. It was lively, dark fruity and had plenty of acid to cut through the cheese but a few degrees too warm. I think it probably could have done with a bit more air as well as a chill, by the end of the bottle it’d opened out and was nicely plum/damsony with black forest gateau on the finish (and not just because my last plate was a blue cheese served with a chocolate brownie). I’ve had other blaufränkisch and other wines made by Judith Beck both of which I’ve felt are a lot better than this was, so felt a little let down, especially given how great the cheese experience was.

They’re going back to pay-per-plate at the end of August, which having done it all-you-can-eat may make it a very dangerous place for me to go! 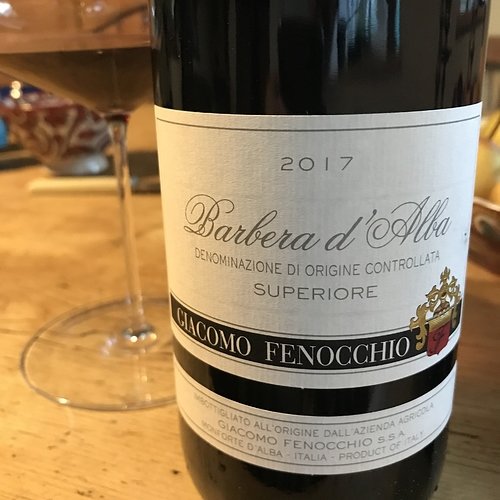 image3024×3024 1.66 MB
This is was recommended to me by ‘The Grape and the Good’, Broad Street, Wells, and I can recommend both the Barbera and the shop, he has a strong Italian game, his beers are terrific and I would strongly urge a look at the west front of the cathedral while you are there. I would do a link to the shop but it seems beyond my powers.

I was thinking about Inbar’s comment about matching wine to mood and weather, this wine is warm with a little bracing spice, enfolding and comforting. Just the job.

it was worth the wait

During lockdown have had to turn my hand to a little hairdressing, so took to watching the Kevin Luchmun u tubes for a little advice, a few domestics later my wife felt I deserved a treat for my valiant efforts, was rewarded with a large goblet of chilled advocat with a super dob of Tia Maria. She is still finding it difficult to leave the house though.

‘The Grape and the Good’, Broad Street, Wells, and I can recommend both the Barbera and the shop

Ooh, I’ll have to check them out next time I’m up that way! 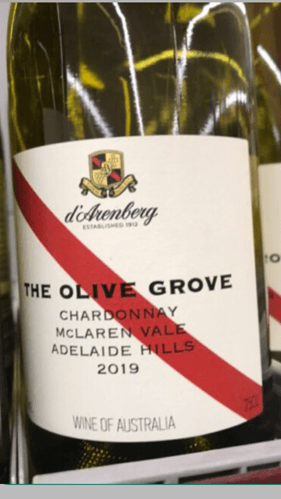 This Chardonnay bought for a tenner at Tesco. Surprisingly good!

Think tangy pear drops with a healthy balance of sweetness and acidity. Not bad midweek drinking

Can I enquire as to the ‘style’ of the wine (ie big and brash, or more restrained)?

I’ve been mulling over Fenocchio for some time - he appears to be a traditionalist in Piedmont - but loads of reviews talk of big broad-shouldered wines, and I can’t seem to sort-the-wheat-from-the-chaff and get a clear picture of where his true wine style sits.

With the caveat of a slightly wobbly grasp of such things I would say a modernist who has dialled It back a bit. I think the intent to make serious wine is clear and I do like the style. Not as modern as Sandrone.

I think I am probably someone who talks a good traditionalist game but quietly prefers something more modern. And I did actually enjoy drinking this.

Ooh, I’ll have to check them out next time I’m up that way!

Do, it’s a nice Indy. Any I need to go to round yer? Don’t know what’s in your direction much.

I would have to respectfully disagree, Claudio at Fenocchio is definitely a traditionalist - although these terms are starting to mean less and less in the Langhe as the producers are rather tired of endless talk of traditional vs modern. Claudio uses traditional methods - natural fermentation, 40 day maceration (except the 90 day riserva), ageing in large botte.

I would say Fenocchio can be quite big wines in a way, but the tannins are generally fine and really well managed, they are elegant rather than rustic and are often approachable young which is not to say they wont age. I had the Villero ‘13 back in December as an acquaintance had mention it was quite open and enjoyable and it really was.
@Tannatastic - I would definitely recommend to give the Barolos a go, Seckford have the 2015 Cannubi and Villero at 150 and 140 per 6 respectively (IB), which is a bargain. The ‘15s are quite approachable and open.

The confusion probably comes in with many producer’s Barberas as even the traditionalists use barrique and tonneaux and will also often use new oak (often a new botti will be used for Barbera first to make the oak more neutral for the nebbiolo in subsequent vintages). A couple of years ago I had a Bartolo Mascarello Barbera that seemed really over oaked.

Aldo from Vajra has previously said if you want to know if a producer is traditional - see if they have a Freisa in their line up!

Here is a picture of Claudio in the cellar from a couple of years back. I am off to visit again next week!

P.s. Glad you enjoyed the wine, as you can probably tell one of my favourite producers. 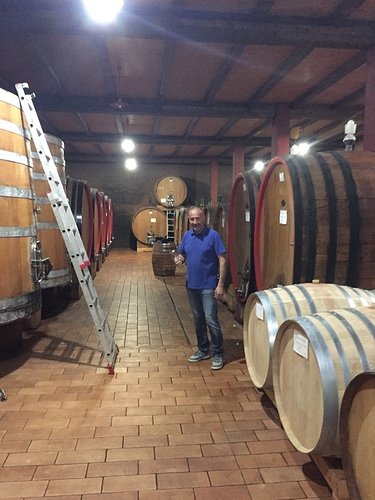 There you go, the right answer is out there @Tannatastic just not where you asked for it. Thank you for weighing in @Olivercg really full and informative.

Like you though I thought it a biggish, almost glossy wine with a roundness to the structures. Maybe why I thought modern but not quite?

Lil bit jealous of the trip,… 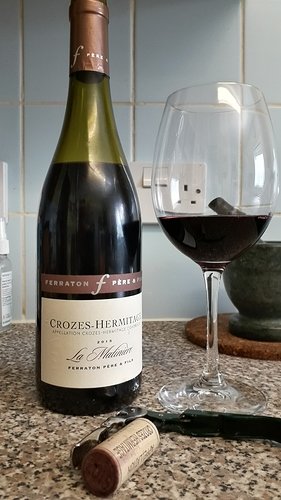 Very good food wine, and a versatile one at that, £12 a bottle for the 2018 proved impossible to resist

Any I need to go to round yer? Don’t know what’s in your direction much.

There’s nothing in Yeovil but a Majestic, but Sherborne has a nice little independent. Oh, and there’s one in Castle Cary which is really good for a mosey and a chit-chat. I haven’t been to the one in South Petherton yet - maybe once they’re back at school!

Oh, and for South African wines, there’s a great place just off the A37, a little north of Shepton Mallet, run by the great-grandson of the chap who invented pinotage. He’s really friendly, good for a chat, interesting selection.

But to be honest, I don’t get out a lot, so there may be more I’m not aware of!