Never started one of these before… and in a way, it’s a wine which was opened yesterday evening, but not really tasted until today. From a mixed Claret Commune case, this very good wine:

A dark, plummy and rich claret from the warm, ripe 2009 vintage. Please note the elevated alcohol level on this wine, which came in higher than normal but is balanced by rich cassis fruit, moderate acidity and velvety texture. A good accompaniment to a warming beef stew.

Never had a Cotes de Francs Claret and it has confirmed my preference for merlot dominant Bordeaux. It’s so dense, no hint at all of any age in its colour. The nose is not expressive, but hints at dark fruit rather than anything else. The alcohol is very high, but it has no evident heat, just bags of plummy fruit, slightly bitter black plum or damson skins.
There’s an odd and very subtle sort of spritz - excess sulphur dioxide?? followed by a huge mouthful of solid fruit wrapped in a veil of present, but balanced tannins. The acidity is equally balanced, not excessive as some reviews. At 11 years old, an amazing wine - most would guess 5 or 6 at most.

So, what are you opening this week?

I think I might open a bottle of the Aldi Chateauneuf du Pape Blanc that has just turned up. I know its just a baby but I’m curious! 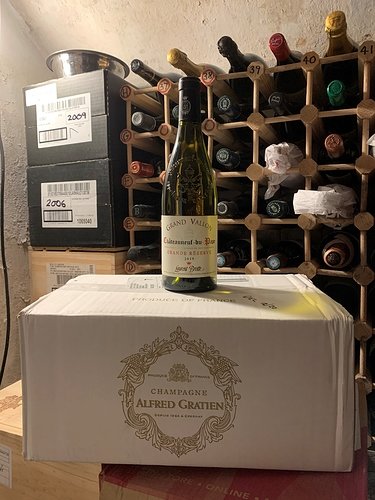 Just put away my case of TWS Champagne delivered this morning with a 'Do not disturb for 18 months ’ label.

Been trying this cheeky little number as my wife summarised last night - perfect aperitif, sharp, fruit driven, well balanced and a great price. Bought one to try and might have to go back for more… 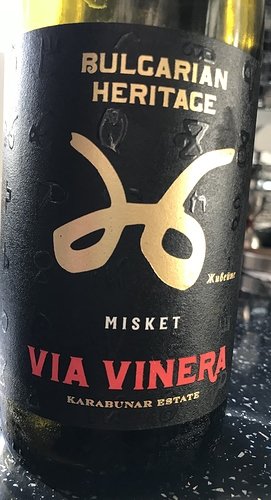 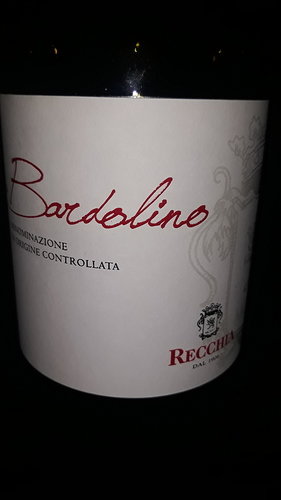 Go open the Aldi CNDP blanc. I have one and want to know what it’s like

Trust you dated the label😉 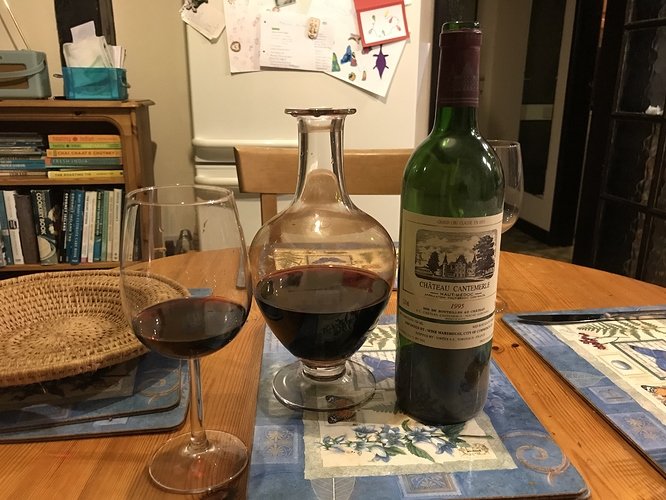 Just finished work, and the other half is busy making a Spanish goat hotpot with chorizo and beans. There’s advantages to working late! 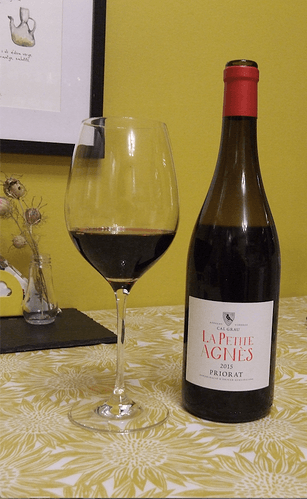 I bought this in Waitrose last year, I think (looks like the 2016 is currently on offer); it’s a blend of 50% Garnacha and 50% Samsó (aka Cariñena), which spent 4 months in new French oak. After 2 hours in the decanter, the nose is still rather timid, but what it gives has notes of plums, bramble and a touch of spice.

On the palate, it’s another story – it gives more generously, starting with ripe and concentrated black fruit (plums, blackcurrants) - though there are definitely some red berries there too - and then goes a little more earthy and rustic in tone, before finishing on a lift of acidity coupled with a note of liquorice. The tannins are very smooth, and the high ABV is well balanced, though leaves a nice warmth in the belly…

The other half loved it from the first sip, and on first glass I also find it easy and enjoyable drinking (and will match the food well, I think), but for my money the Cebreros Garnacha we had last week offers a bit more excitement, zest and interest for less money.

OK, went and opened the Aldi CNDP Blanc as instructed! Told Lady Brentw1 that it had to be done as the community were waiting with bated breath (well @qualitybristol was!).

There’s a reason that you can buy this for £14.99 in Aldi, it’s called cash-flow. I can go back to 2012 when I bought 2008 Sociando Mallet being marketed as perfect with your Christmas dinner! Well maybe after another 6 years in the cellar.

I suspect that the producer has needed to get some money in the coffers and that is why this has been released so early. A quick search on the TWS site reveals 9 alternatives at two to at least three times the price and nothing later than a 2018. Many have a ten year drinking window, so my initial thoughts were that I would be taking one for the team this evening and committing a minor version of wine infanticide.

The first thing I noticed was that it has been bottled with a Diam 5. So I would be assuming that the producer is not expecting it to spend as much time in the cellar as a Domaine du Vieux Télégraphe at £46 a bottle. Fair enough at that price point.

The nose was displaying plenty of unripe peach and flower scent but there was also a slight hint (very slight and lets see if it blows off tomorrow) of nail varnish, the classic sign of a touch of volatile acidity.

The palate was not that exciting with a hint of the hazelnuts talked about on the Aldi website, but mostly a continuation of (riper?) peach and white flowers mixed with a touch of vanilla. I’ll give it credit for a longish finish where the peach and vanilla persisted through but I could not pick up much else. Not an unpleasant wine by any means but I felt it was a touch unresolved and may well improve and be a bit more refined over the next 12 to 18 months, but I wouldn’t want to take it past say another three years.

Tried initially at about 12 degrees but then took it down to 9 which was an improvement as it was much fresher and more floral at the cooler temperature.

In summary. Good value for money compared to other CNDP Blancs but keep it for a while to get the best out of it.

I also opened a bottle of this earlier, I’d say it’s definitely better than I expected and great value.

White Chateauneuf is a complicated thing, so much variation in style and price and not always a direct relationship between those two things, I’ve definitely spent twice the price of the Aldi offering and found a wine that offered a similar level of enjoyment.

I didn’t get any of the VA that you found but did get loads of white peach which I expected, didn’t expect the slightly more complex edge of slightly bitter orange though.

This famous Sicilian estate has been making this blend of local white grape varieties for over 50 years and they get it right. Balanced, gently dry companionable drinking with a delicately fruity nose and plenty of fresh fruit flavours.

Pea and parmesan risotto tonight. Subtle white flowers and citrus. Touch of stone and spice on the finish. Well made and well priced everyday Italian white.

Evelyne Boizel is the fifth generation of her family to run this Champagne house in the heart of Epernay. Her husband Christophe Roque makes the wine. The blend, from as many as 50 different vineyards and including many premiers and grands crus, is dominated by 55% pinot noir with 30% chardonnay and...

Penultimate one of these and just added a case for 2022 (forgot last year) as on sale again.

This month celebrating my MIL’s 65th… Or what would have been. Wish I’d met her, she sounds a lot of fun, just like this bottle.

Tonight is our Friday night (I’m off tomorrow, the ravages of covid-19 track and trace making that a seldom-seen phenomenon lately), so to start, with Cod loin wrapped in bacon and braised Savoy cabbage, this… 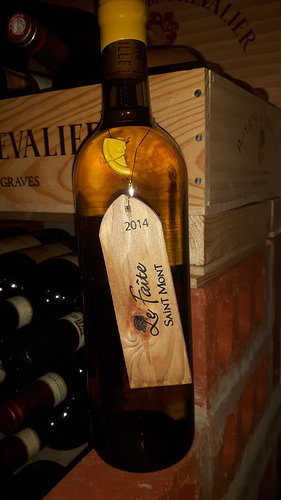 Wonderful complexity, with lemony acidity and clear further ageability. I wonder if TWS have heard of Plaimont?

Oh, and it being Friday night chez nous, some more wine will be imbibed shortly

That’s a really lovely wine. Always thought it’s a slight pity it seems to be distributed by C&B in the UK as they tend to be pretty pricy, but it seems to appear in their sales with some regularity.

It’s probably a tough sell for them - I suspect it’d be an easier sell for TWS (given the size, engagement and knowledge of the membership).

Thank you @Brentw1 for your review. I will open it at the weekend, although it may be better to keep a year. I’ll give a tasting note too.

Incidentally, it seems that TWS is aware of Plaimont (though not choosing what I would from the range):

Manseng noir is the secret ingredient in this deliciously fruity red from Gascony in the south-west of France, and one of several grape varieties that have been rediscovered from odd vines that escaped the scourge of the locust-like phylloxera that ravaged Europe’s vines in the 19th century. Its key...


Meanwhile, I opened the exhibition Pinotage from my mystery case (2018). It really is delicious for those of us not allergic to Pinotage.

Meanwhile, while I’m talking to you, do you have thoughts on this? Always been a Geyser fan but never been up the price scale on the dry side.

A rich, powerful and majestic Jurançon made with old-vine petit manseng, this is packed with flavours of dried fruit, apricot, fig and quince. Pair with a hearty chicken tagine or roast goose.