As wine lovers, we travel hopefully.
When we purchase, we have an idea what might await us at the end of that particular rainbow, but rarely does it truly deliver.
I bought a case of Grivot Bourgogne Rouge 2013 in 2015 for £25 per bottle.
This is his least celebrated wine, the best that year that was offered was his Vosne Romanee 1ere Cru Suchots at £148 per bottle.
My offering last night, exceeded my expectations exponentially, and I found it without the assistance of Vinous nor The Advocate.
Decanted, and left for 3 hours; on initial tasting it was quite lovely.
Cherries all the way, restrained with a nice streak of acidity at the front end, medium bodied and building through the centre and I promise you, a slightly bitter cherry stone finish that persisted for minutes!! The paleness of colour of the wine, belied the actuality - you really had to be there!!
The best bit was over several hours, it became a little ethereal. The components were all there, but a quite delicious lightness of touch emerged that left me a little in awe of this generic bottle. Speculating, I may have got some miss-labelled bottles, I have no idea. Reading notes from revered reviewers, you are not meant to drink a “simple and inexpensive” Bourgogne Rouge, seven years - post vintage. The fruit will have faded etc is the received wisdom.

So, if you still have some of Grivot’s Bourgogne Rouge 2013, then in my humble and untutored opinion - I cannot imagine this bottle getting any better, so throat away!!

Firm and substantial red Burgundy from a grower long established as one of Vosne-Romanée's best. This Bourgogne is something of a fine-wine bargain: the 2015 vintage was a recent star of our Wine Champions blind tastings and, after some time in bottle, the 2013 is softening up and showing classic...

Restrained and certainly fading but nice lemon notes and a slightly toasty finish. Really drinkable albeit completely overwhelmed by food. Single bottle on brokerage, glad I tried it

With an almost unbroken run as our bestselling red, this fruity, unoaked merlot-based Bordeaux is the result of a long and fruitful partnership with the Sichel family, whose impeccable credentials include ownership and part ownership respectively of crus Angludet and Palmer. They've supplied us with...


Initially I was a little disappointed, but only because I had entered its price incorrectly into my cellar spreadsheet at £13.50 instead of £7.50. At the higher price I figured there were some much better offerings out there. Then I went and checked the price, I figured there was no way something of such doubtful VFM would be the societies bestselling red and sure enough I had the price wrong; at £7.50 this is a whole different story. Some cheaper, younger Bordeaux can be little more than merlot fruit bombs, but this one is nicely balanced with reasonably grippy tannins giving it some true Bordeaux character whilst still being moderately priced. What’s not to like about that at that price?

I got this as part of a mixed 6 bottle “Taste of Bordeaux 2018” case last year but have so far only managed to drink this one and the Ch Branda which at only £6.95 was also excellent VFM. Must get around to the rest as I don’t think any of them are really designed to be drunk old.

Nero d’Avola Siccagno 2015, Occhipinti First time for me with Arianna Occhipinti’s NdA. In line with her other wines, it’s all about texture and racy red-fruited liquidity - a very far cry from the gorgeous Gulfi NdA i had the other day, and of course from all the dull cheap NdA British merchants seem to think is what we want. The wine puts on a darker, wilder air with a few hours open. Delicious, albeit not quite at the level of Arianna’s iconic Frappato.

BBC weather suggests that this may be the last ludicrously sunny day for some time so I’ve shut the laptop a little early and opened a bottle of this to drink outside.

The last vineyard in the Sauzet portfolio to be harvested, and perhaps one of the ripest, this is a superb white Burgundy with a hint of honey.

Do you like good ripe white burgundy? Do you like honey? If the answer to both questions is yes, then (as it did with me a few months ago, when I opened my first bottle of it) this will knock your socks off. Not that socks are appropriate anyway, with all this sun.

BBC weather suggests that this may be the last ludicrously sunny day for some time so I’ve shut the laptop a little early and opened a bottle of this to drink outside.

What a fantastic adieu!

Our last ‘ludicrously sunny day’ was yesterday; it’s been raining steadily all day today so I’ll continue to enjoy my Society’s Claret!

A rather stressful day at work for me today, so I needed an uncomplicated but happy sort of wine. Homed-in on a 2018 Baden Spätburgunder bought from Lidl’s recent ‘Spring Tour’: 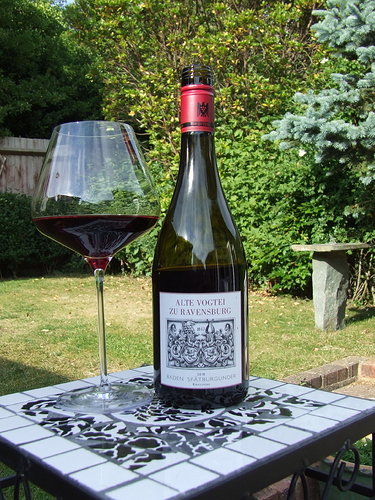 The winery is located not far from Heidelberg, a part of Germany I know well and love. Despite the good value for money ratio (£8.99) – especially considering it’s organic and harvest is by hand - we’re a tad disappointed with it. The main issue seems to be a case of unbalance… There’s good tangy fruit (sour cherry, redcurrants, forest berries), a lick of spice (clove), earthy/fresh soil notes, a fair amount of freshness and acidity and grainy, even slightly woody tannins. It’s just the the parts don’t quite add up to a neat, balanced sum. It’s a little bit in a state of disharmony.

I am hoping with a little bit more time in the glass it will improve, as we usually really enjoy PN from Baden.

In the meantime the other half is busy making pan-fried pigeon breasts with celeriac mash and I’m kvetching on the sofa with a glass of Manzanilla. Seems like a fair deal after the sort of day I had!

I bought a couple of these when they appeared, tried one and then bought another 6 when they were reduced down to £6.99. Found it a bit too juicy straight from the bottle but an hour in the decanter did the trick!

but an hour in the decanter did the trick!

That’s good to know - we did decant it, but I have hopes that over the course of the evening it will develop and maybe feel a bit more harmonious. It is no doubt excellent VfM though! And I’ve got a soft spot for Baden PN which makes me more forgiving towards them, in any case!

Heidelberg is glorious, lovely castle I think, and Wagner territory? 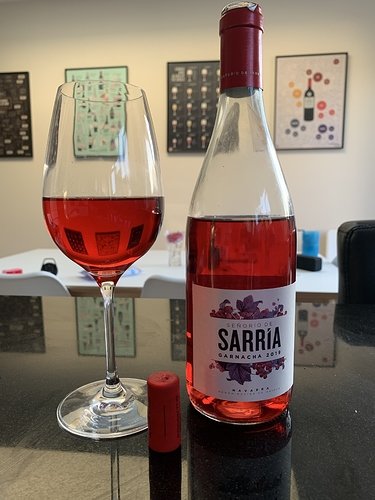 This colour is amazing…the red cork is awesome too!

100% Garnacha. Pleasant find on a very warm evening. Tonnes of strawberries on the nose and the palate. And errrr the colour is errrr bright!

Delicious with a risotto primavera topped with steamed English asparagus. 95% Sauvignon Blanc with 5% Semillon and all fresh as a daisy. 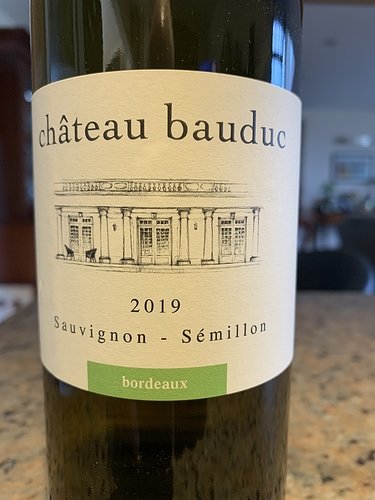 Yes, indeed! A stunning place in my opinion… I love the Altstadt, and the University is also amazing - one of my friends was doing her biology PhD work there. And yes! Wagner territory…

Hoping to visit there again before too long…

Are these Wine Folly posters on your wall?.. They look gorgeous, whatever they are (as is the wine’s colour!!)

Yes nice spot! All wine folly posters in the kitchen. I’m keen to get the maps for the rest of the house but need to persuade someone else!

I’m keen to get the maps for the rest of the house but need to persuade someone else!

You and me, both 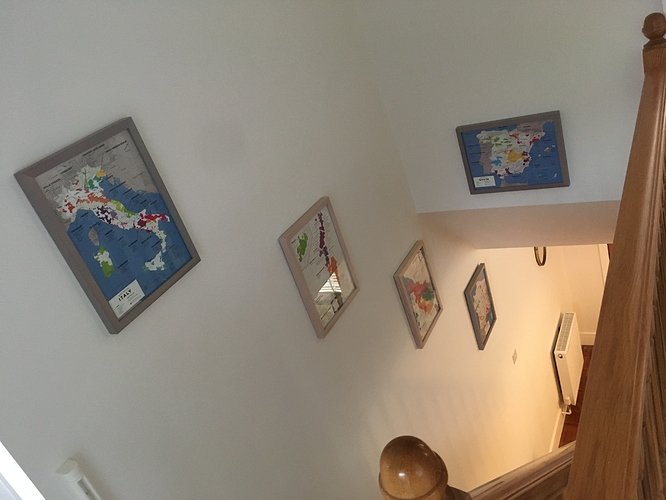 A fascinating, distinctive and very different style of Spanish pink wine than we are used to. Dry, savoury, slightly cloudy, with unusual yet compelling flavours of spice and orange, this will appeal to adventurous wine drinkers. Please note that the wine has not been filtered and, as such, may...

I’ve seen a couple of mentions of ageing potential but I doubt the rest of the case will see out the month, let alone next year.

Wow thank you, I will use that picture to prove my point. Those maps are brilliant!

Great choice of wine too, got 5 left to work my way through this summer.