I put this in the weekend thread. I’m glad to find kindred spirits

Being as we are on a nice long weekend break, I brought my favourite indulgent choccie, a Bendicks Bittermint - there was some fair similarity.

I had to Google it back then, but they are now also one of my favourite… having this strictly after the wine though. Thanks to the Community and especially @DrEm for the introduction.

You’re welcome @szaki1974…
We had roasted wild mallard breast last night. They went with a salad of cucumber, celery, peas and blanched asparagus enrobed in a Dijon mustard dressing. There was a lot of it so there’ll be more tonight with a Burrata.
This went with the Mallard.

An enchanting bouquet combines with rich, ripe fruit in this Chianti from the heart of the Classico region. The vineyard is at high altitude, giving finesse to the fruit, while the warm vintage adds body and keeping quality. Certified organic.


After the discussion last week about Chianti, I just had to give it a go. It is pretty soft for Chianti, not puckering and went well.
The TWS dates are clearly incorrect as was pointed out during the discussion.
8 Likes
adbdorset June 18, 2020, 11:45am #29

Enjoyed this last night with some BBQ pork and trimmings.
A white Costieres de Nimes, Marsanne and Roussane…stone fruits (apricots and peachy). Last bottle from our 2019 Vin Toques experience. 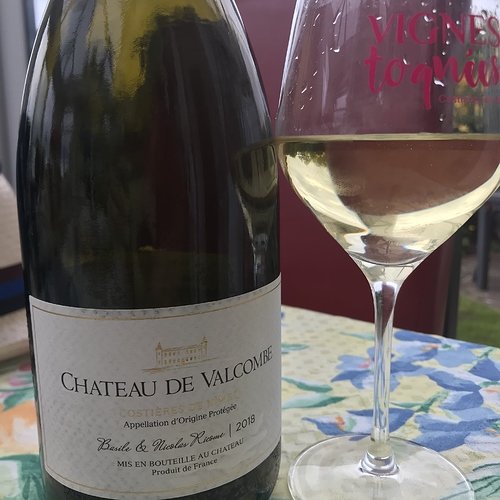 DUPCOPY DUPCOPY DUPCOPY With a perfumed nose and a broad, ripe palate offering good grip, Clos du Roy is slightly firmer and more structured than the same producer's Longeroies in this offer. Both are lovely – it’s a personal choice of which you prefer! 2024–2030.


I tried this last night, I bought it with the thought that I might get more if it was good but it sold out anyway.

Nice nose, perfectly correct but lacking in something, “It ain’t no thing if it ain’t got that swing” as someone observed. I liked it but I am not sorry it has sold out. I was mentally comparing it to the Drouhin Chorey from Waitrose, which has that swing (to my taste). I wonder if the Jadot wine needed keeping a bit more.

Just realised I posted this in the wrong thread. Sorry.

Just realised I posted this in the wrong thread. Sorry.

Fixed that for you

Thank you @Inbar for doing this. I would never have worked it out.

This went down very nicely with a venison burger yesterday evening… 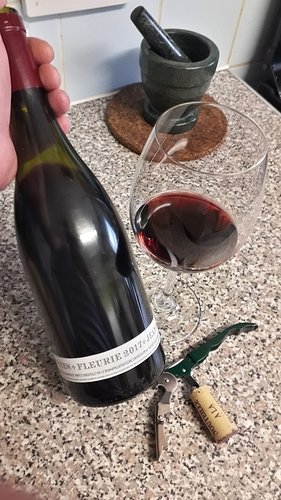 …a 2017 Fleurie from J-P Brun (£16). Raspberry and cranberry with a hint of violets on the nose. Similar red fruit flavours on tasting with a bit of black cherry too. Deeply flavoured with a savoury undertow, slippery texture and some light tannic grip on the finish, it was thoroughly enjoyed.

Neither of us fancied cooking this evening, and the 17 year old is rather useless on that front - so takeaway pizza it is. Placed an order with a lovely neighbourhood Neapolitan place - so we can tell ourselves it’s for a good cause rather than sheer laziness. 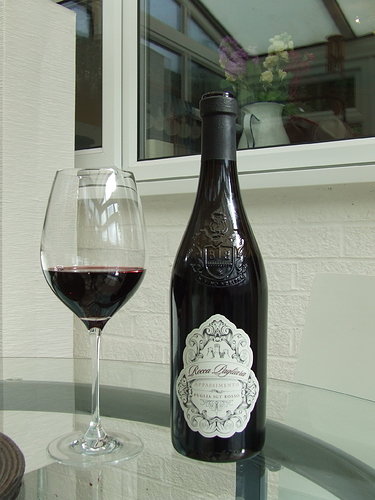 It’s a style we like from time to time, though not the sort of red we usually reach out for, especially not mid-week, what with its 14.5% and density of a black hole. Having said that - this is incredibly quaffable!

A blend of Negroamaro, Merlot and Malvasia Nera, the nose is a lovely concoction of plums, blackcurrants, cocoa and baking spices. On the palate it surprises with its balance - I was expecting a bit of a fruit bomb, but although it hits you first with fruit (plums, blackcurrant, VERY ripe cherries) it then develops a lovely warm spiciness (not unlike a Christmas pudding), adds an herbaceous note, and finishes on a cough mixture note. Both acidity and tannins are medium, and the fruitiness is well matched by a nice touch of sourness. The alcohol is definitely there, but it’s not out of kilter. A little complex number, and all for £9.


I opened this Penedes wine from Gramona last night and well this was a complete revelation and quite a delight to sip as an aperitif. A blend of Muscat, sauvignon blanc, moscatel de Frontignon (Muscat a petit grain), gewurtztraimer and muscat of Alexandria.
So nice and such great drink while sitting reviewing 2 hours of cctv footage of my bank lane for the police…

Oh no, were you burgled? We were last year, and they were caught on CCTV from the local pub near our driveway, which showed them drinking beers when they stepped out of their stolen car. They put the empties against the wall near the pub, then went into my house. My wife and 10 year old son disturbed them when they came home 2 minutes later, and my wife chased them out down the driveway and photographed them inside their car before they got away.

The police found the CCTV footage the same day, and guess what? The beer cans were still there against the wall, DNA on file, and both the grubs are now doing time at HM’s pleasure.

Moral of this tale is - it is worth reviewing the footage! Better with wine!

Wow!! What a story. The police came to my door last nigh to say that they had recovered a number of car plates in the back laneway. A garage further down the road had a number of cars stolen and they wanted to see if they could get the cars number plate coming down the street or back lane.
There’s been a massive spate of landrovers and ranger rovers being stolen where I live . theres a criminal gang involved and after mine was stolen outside my front door in October we installed cctv EVERYWHERE. My car is now parked in the garage with a steering wheel lock on, alarmed and cctv in the garage, in the garden from 2 angles and the back lane… ! Not sure what the world is coming to.

I know, it’s scary. We had quotes to get CCTV installed afterwards but opted against it in the end. I still wonder if we did the right thing.

Did you get anything off yours the police can use?

We bought our system and my husband installed it, handy he’s an engineer. Yes got the car used to drop off the criminals on cctv.

Kinda glad no one would ever want my car…

Is there such a wine? I have been practicing deep frying little ones from the garden in the Roman/Jewish style. Not quite there yet but I will keep trying. Never thought I would find a wine match.

Yeah, there are a few

The other week i had a delicious Malvasia from the beautiful island of Salina made by Tasca d’Almerita, Didyme, which surprised me how well it worked considering it’s a wine very much fashioned for seafood in that understated Italian style, only hinting subtly at the grape’s aromatics.

Which of course shows where potential matches lurk - basically highly aromatic grapes! Torres used to market Vinya Esmeralda, mostly Moscatel with a bit of Gewürztraminer, in Spain as “the only wine that goes with artichokes”.

I’ve found that Andalusian mountain moscatels like Calvente’s Guindalera and Telmo R’s MR work well, and I’m hoping to try an Alsace Muscat with the last of this year’s crop this weekend.

An Istrian Malvasia could work maybe? Or a Moscofilero, or even a Malagousia? Or another one I don’t like, Torrontés.

i shall keep researching, in any case. It’s the least the King of Vegetables deserves

. Very impressed with your attempts at carciofi alla giudea - the apotheosis of vegetable gastronomy!

Slightly miss understood the instructions of last night’s tasting and had Facetime drinks with my friend Rose.

Given the sun had come out to play we opened a bottle of COS Frappato 2018. Delicious fruity high acid Italian red. It was the colour of a cherry jolly rancher, light bodied with plenty of red fruit, grapes and some fennel notes. It would be excellent with a plate of southern Italian cured meats and other antipasti on a summer evening.

Not the best value for money (although in my case it was a gift) but a real treat none the less.

From the great 2010 vintage, this is a deep coloured sleek tasting syrah. Perfect drunk young on the fruit but will keep.


Just lovely and still in a great place but only just. Interesting with all the comments in the recent thread about the overly conservative TWS drinking window end dates; this is probably about spot on. 2020 is the end of the TWS window and whilst still a gorgeous glass of mature Rhone, there was very little in the way of fruit remaining but lots of lovely chewy, savoury tertiary flavours; tobacco, cedar and pepper. However I think the TWS date is probably about right and, lovely wine that it is, I think it’s probably started a graceful decline into old age. I need to get my one remaining bottle of this vintage drunk fairly soon I think.
15 Likes
next page →