The second get together of the SW London wine appreciation group yesterday. Again hosted by Massimo of Artisans of Sardinia. He has also put together a menu to match our (and his) wines. 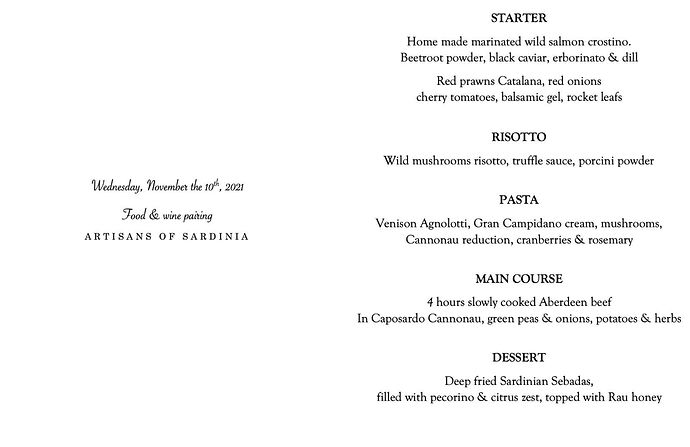 Welcoming @strawpig and @MikeFranklin to the fold. Special thanks to Mike, who saved the day by filling in for a late cancellation.

Now to the small matter of the wines (gushing review alert). 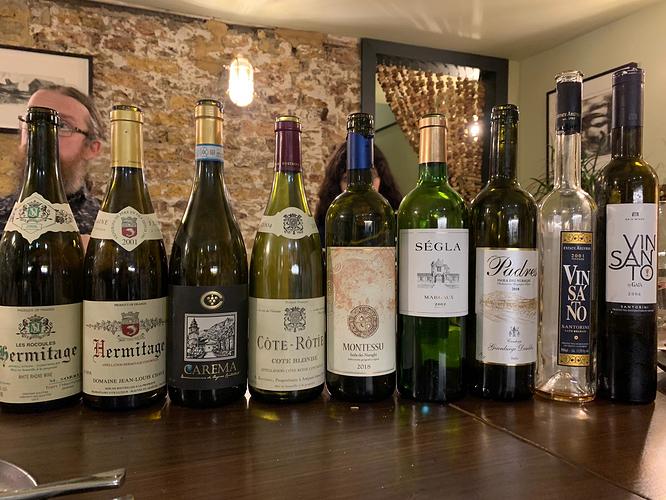 It was one of those rare moments when long silence and big smiles follow the first sips and maybe one or two tears are also shed. Unfortunately it had to be the 2001 Chave and 2006 Sorrel Les Rocoules Hermitage Blancs eliciting this reaction, unfortunate mainly because of the price tag and unavailability of these wines. Both recent TWS purchases. The aroma of ripe apricots immediately filled the room on opening the bottles. Both singing in my opinion. The Rocoules was bold and big on the nose, the flavours stood up to the 15.5% alcohol, rendering it unnoticeable. The Chave was more restrained on the nose, but delicious on the palate, also a modest 13% alcohol. We also had the two amazing fish courses in the process, but completely overshadowed by the wines. Also the rare sight of @MikeFranklin enjoying a white wine…

When the risotto was served, the fresh apricot aromas gave way to earthy truffles, also filling the room. We had the 2017 Carema from the Cantina Produttori Nebbiolo Di Carema opened for this, Nebbiolo from the very North of Piedmont. So very young, but so very good with the risotto. Acid and tannins aplenty with lingering red fruit in the background. We then moved on to the 2004 Cote Rotie Cote Blonde from Rostaing. Nice and smooth, drinking well now. A pleasure to have it. With the venison filled pasta (I think).

Cannonau is Sardinian for Grenache. The beef was pretty exquisite. With this we opened the 2012 Segla, which was very satisfying. Soft and elegant, as a Margaux should be (allegedly). We were also recommended a red from the wine list to go with the main. The 2018 Montessu from Agricola Punica.

One of my favourite red wines on the list, a small baby super Tuscan style wine made with a special blend of native and international grapes, Carignan 60%, Cabernet Sauvignon 10%, Cabernet Franc 10%, Merlot 10% and Syrah 10%. An intense ruby red , complex fruity, spicy, with hints of coffee and liquorice. On the palate is elegant and well structured, velvety, taste of red ripe fruit notes and spices. The wine is aged for 15 months in oak barrels giving an extra balance and body. (Massimo’s assessment of the 2017)

The Carignan is grown in Sardinia, the rest is grown and shipped over by the people of Sasiccaia. All vinified in Sardinia. Basically a blend of Carignan and Super Tuscan. It was nice but a bit stalky at first (a positive for some), but opened up to be very enjoyable with a little time.

By this time the restaurant upstairs became quieter (maybe shut?) and Massimo had more time for us. He is very knowledgeable and passionate about wine and went on to open another bottle for us. The 2018 Padres from Gianluigi Deaddis was so sweet fruited, a good bridge between main and desert. Made from 100% Bovale Sardo, a grape new to most of us, but one I will be very happy to have in the future.

The pastry filled with cheese and coated with honey was very nice and I found the level of sweetness perfect. The 2001 Argyros VinSanto was just about perfect, too. Another revelation on the night. It did a bit of disservice to the 2006 Gaia, being opened second. Tasted a bit rustic after the Argyros, but with air it became much better. The night nicely framed with 2001 and 2006 whites and 2001 and 2006 sweeties. 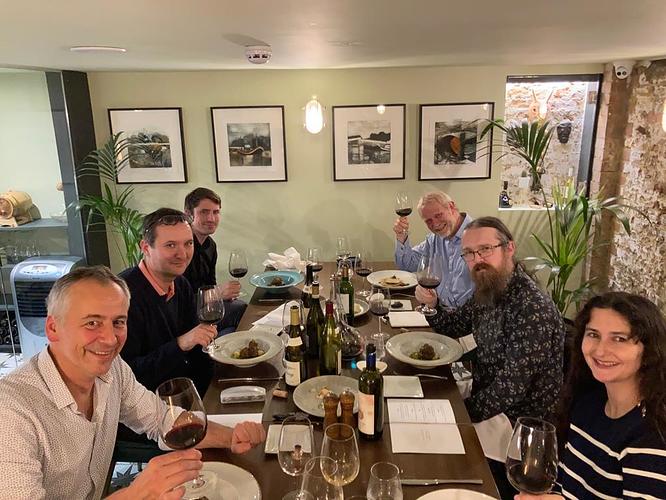 What a lovely-looking evening. Special wine, food and company.

Excellent write up @szaki1974 describing a perfect evening perfectly! I am immensely grateful to you all for allowing me (very definitely not a South West Londoner) to join your group for the evening. It was a fantastic evening and I am quite humbled by some of the excellent wines brought along. Thank you all.

And yes, shock horror, I genuinely loved the two white Hermitages. Just such a shame they are (even when young) rather out of my budget (but I could be tempted…

). I wasn’t too surprised to find myself loving the beautifully mature Cote Rotie, the Carema was a wine completely new to me that I would also buy on sight, as were the two Vinsantos that I would have expected to have been a little more reticent about. But there was no cloying sweetness but rather lovely smooth complexities and, as Akos said, they went perfectly with the Sebadas. The two Sardinian wines from the restaurant were also beautiful especially with Massimo’s in depth knowledge on their backgrounds.

Altogether a great evening that I would love to repeat if/when I ever get the chance!

I would say that it’s a bit early from its prime but no harm in trying one if you’ve got 6 and giving a 2hr decant.

I think it was Early August when I opened one and I completely agree, it was still a little muted . I’ll wait until next year before cracking open another

Which is Mike and strawpig in the photo …???

…and who are the other two lucky members? Nicola was easy to guess

Yeah I’m the one on the end on the right looking scarily old!

Actually @NicolaR and @szaki1974 maybe you could make a suggestion for me; based on the style of those two gorgeous Hermitages, what wines might you recommend that might be comparable style, but rather less pricey?

I’m sure Akos will have loads of brilliant suggestions! I suggest adding Vacqueyras Blanc Les Clefs d'Or, Clos des Cazaux 2020 to your next order!

The bar is set rather high, especially given their age… maybe a Marsanne heavy white St. Joseph or white Crozes Hermitage, like…

Also, you can buy some Hermitage Blancs cheaper EP like Pierelles and Chante-Alouette, but you need time.

Thanks @NicolaR and @szaki1974. I think they were probably both the first Rhone whites I’ve tried and also the first marsannes or rousanne I’ve tried. So some exploration in order. Interestingly enough I do have a Savoie rousanne at home that I’ve been meaning to try (@Inbar will know the one of which I speak!). I believe both of those Hermitages had both marsanne and rousanne but maybe less rousanne in the Chave I think?

The bar is set rather high, especially given their age…

Yeah but I’ve got to start somewhere!

How well do these whites keep once opened? This is also a factor for me normally!

Why waste precious time? Much better to start near the top! 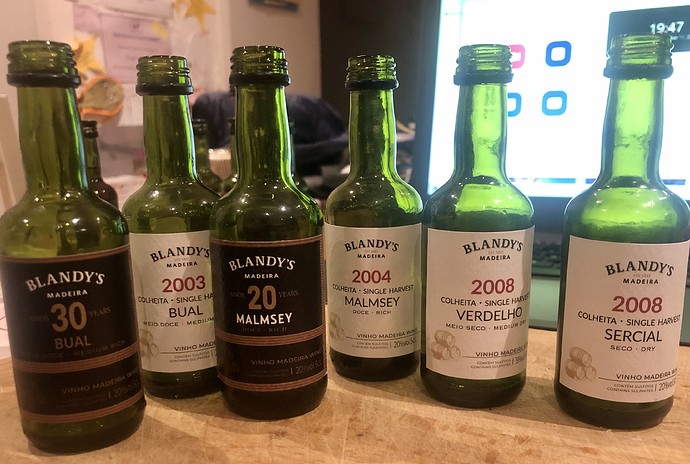 Stunning tasting. Chris Blandy was great and his wines were even better.

Goal for the rest of the evening: MrsB saved some of the contents of her bottles as she is on bedtime story duty this evening. My powers of persuasion will need to be beyond peak to get some of her Madeira in my glass.

Must say, what the SW London group enjoyed the other evening, in every respect, looked absolutely amazing 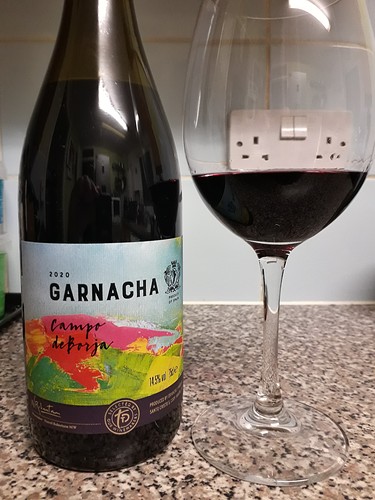 …a Sainsbury’s TTD Campo de Borja Garnacha 2020. Made by Norrel Robertson MW for the local Santo Cristo co-op. Bought whilst on offer for £7.

Smoky black and blueberry fruit on the nose. Rather more interesting on tasting. Ripe and fruity berry flavours with a touch pf peppery spice, surprising freshness of flavour thanks to its bright acid balance, no tannins to speak of and a clean berried finish. Nothing remotely hot considering it’s 14.5% ABV. Cleverly made and excellent value at the reduced price ( RRP £9 ). All in all, a thoroughly enjoyable midweek wine that exceeded expectations. 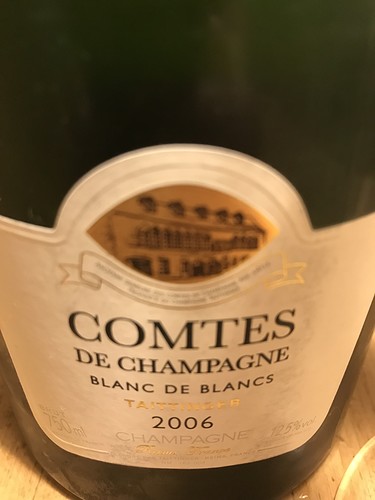 How much more of this gooseberry cider do I have to get through? I must have bought the entire stock of M&S when they were selling off, wise and sagacious person that I am. I still have a box to go.

If I opened a bottle of Pol next to this then the Pol would taste shrill, if I happened to have a glass of Bollinger that would taste brown. But this is as, Colonel Kurtz would say, is like being shot by a diamond bullet. Tatty Comtes, of every vintage I have tried, is always transfiguring.