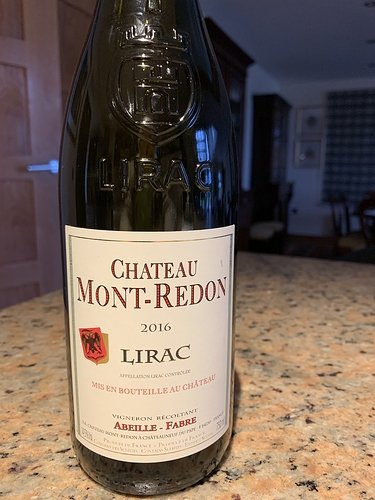 I had some of

This superb dry sherry combines the three vital elements of a good manzanilla, namely concentration, saltiness and freshness, to delicious effect. Made with palomino grapes from the Pago de Maina vineyard and aged for almost ten years in highly seasoned old 600-litre oak casks, it is little short...


arrive today, and couldn’t resist opening one. Stupid bottle (annoying shape and who wants a driven cork with a fake wax capsule in a full bottle of manzanilla), but delicious – very clean with a sharp apple fruitiness and of course the salt tang. Needs to be drunk a fair bit warmer than cheaper manzanilla in my view. Struggling a bit with value, so will see how the rest of the bottle goes rather than buying more immediately, but well worth a try.

Then I needed a good glass to cook with, and was too mean to use expensive sherry, so opened a 2014 Yalumba Eden Valley viognier which I’d put in fthe fridge for Thursday’s aromatic whites before realizing I couldn’t make it. It’s a wine I used to drink regularly (or was it the Y series?) in Vancouver around 2005, so was curious to see how well I thought it held up, and I’m reasonably impressed. At under £10 with a Waitrose 25% off at some point, it’s a lot of wine for the money, and pretty much does what it says on the viognier tin without the wow of the best Rhone examples (but I think it’s better than any similarly priced Rhone viognier I’ve come across).

I’m struggling a bit with a lot of these “modern” sherry’s. I’m all for style, but they’re getting too far into the over substance with a lot of them, and then charging way above the odds. When you have things like Waitrose Manzanilla or The Society’s Fino at the prices they’re at, it gets a bit silly. £24 for me is getting into Amontillado/Palo Cortado territory too.

I hope the bottle improves!

I’m not sure it needs to improve. It has (once warmed up a bit) the manzanilla character without the rasp in the throat that you tend to get from the cheaper ones (Papirusa and Pastrana tend to be my benchmarks for what it’s worth). I’m struggling with value because I quite like the rasp rather than because I can think of anything quite the same and cheaper, but sherry does often seem to get more interesting once the bottle’s been open a day or two.

I bought a case on the back of the Mont Redon CNdP 2016 performance.

Only one bottle remaining!!

I always like the Yalumba viogniers too. In fact I thought the organic had replaced the Y series a while ago but now I see they are both available, with the Y series at £8.50. Good value.

Edit. Oh, but the organic currently at £7.49 at Waitrose; even better value.

Anybody tasted this one recently?
The last time I had a go, it seemed to have lost it’s youthful exuberance and gone into it’s shell?

Made for us by Nicolas Perrin, here from a mighty Rhône vintage, this has depth of colour and full flavour. Dark-berry fruit dominates now but there are also hints of spice and tar which will develop further with time in bottle.

2015 TWS Exhibition Crozes-Hermitage. On the palate this is medium-bodied, juicy with brighter black cherry fruit than the nose suggested. Cleaner as well, with refreshing acidity, decent grip. Maybe a bit less complex than I remember from previous bottles but I think it’s still young and will improve in the next couple of years, on this showing has enough fruit to stand up to the structure. Good food wine but needs some protein, going very well with some coarse pate de campagne and some off…


Maybe less exuberantly fruity than previously, but opened up nicely after a decent decant and was very pleasant. I personally wouldn’t say it was dumb or shut down. Be interested to hear your thoughts!
4 Likes
Taffy-on-Tour May 19, 2020, 1:56am #9

Thanks, when I can get at my reserves; I shall ship some bottles.

Finished off a Cantine Paolini nerello mascalese last night (opened on Sunday so technically this is the wrong thread…). Hard to imagine a more joyous red wine for under a tenner! I’m sure there are far more complex examples available and I’d love to try some etna versions, but this was delicious, full of juicy sour cherry, crunchy texture, went beautifully with homemade pizza (and an attempt at homemade seitan based vegan n’duja that I’m pretty proud of…)

Hard to imagine a more joyous red wine for under a tenner!

Completely agree! We had it several times, from different vintages, and none disappointed. Joyous is the word

No surprises there - Eastern Sicily is the veritable spiritual home of the joyous red!

Can confirm this makes an excellent Negroni

For a gin and tonic with an extra kick! Our high-strength gin is made by Thames Distillers to the same bespoke recipe as our much-loved Society’s Gin, using natural botanicals (spanning organic juniper berries, organic coriander seed, organic angelica root, organic savoury leaves and orris root),...

Moved into our new home today after some very frustrating delays (we moved to where we wished to live two years ago but due to various issues it’s taken that long to buy). Called for a celebratory tipple, Bollinger RD 1996. Not really like champagne anymore but more like old white burgundy with few bubbles. Crisp acidity allied to honeyed richness and nuttiness at the finish which lasts and lasts. 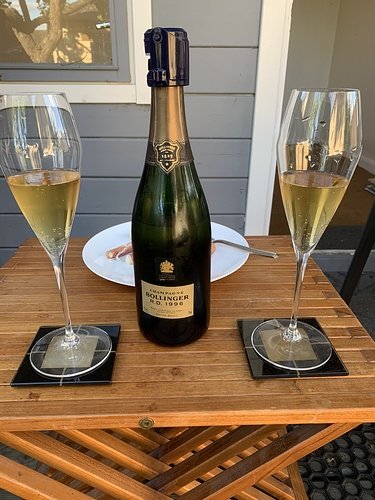 Congrats on the new pad - looks like a lovely way to celebrate!

A glass of Patxaran to start the evening, because the sun in back and because we were due to be in Spain to celebrate a friend’s 50th… this’ll have to do! 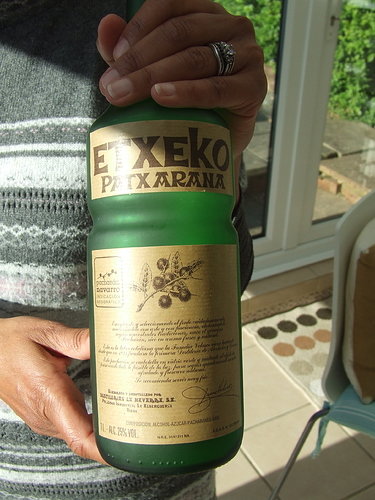 Later, with smoky ham hock and potatoes dish we’re having a 2015 Gewürztraminer (with the umlaut this time) from the Rheinhessen: 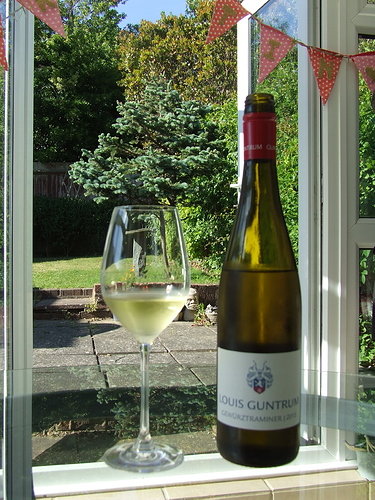 I really like Louis Guntrum’s wines, which often offer good value for money. Although similar to Alsace Gewurz in style (being full flavoured, rounded and perfumed), this is perhaps a little more restrained on both nose and palate, without losing the varietal character which we love. Very striking lemon hue in the glass, the nose is a melange of orange blossom, very delicate rose petals (no Turkish delight here), pear and cinnamon.

On the palate it is generous in texture, but has a lightness of touch which will appeal to people who find some Alsace expressions somewhat ‘blousy’. It has a delightful interplay between sweetness of fruit (pineapple, ripe pear, orange) and zestiness. There’s an underlying spiciness - of the cinnamon/nutmeg type and a refreshing quality to the finish.

Still very youthful and fresh, despite its 5 years. A definite ‘buy again’!

Oh, sorry! It’s a liqueur from Navarra and the Basque Country, flavoured with Sloes and has a touch of aniseed in it too. It’s lighter than Sloe Gin and incredibly quaffable

In Spain they usually offer it as a digestif, but I love it as an aperitif…

Just received my Dolin Vermouth so time to mix one…