Well life goes on don’t it despite it being a bummer sometimes / most times / eventually; hey, thinking of you @NickFoster and I’m sorry I’m late to the pantheon of community support but you have mine too.

Found it difficult to resist the array of B-N at Carrefour yesterday. Wish I hadn’t. Still the same old cherry bubblegum excuse of a wine. Sort of didn’t actually spoil the lamb rissoles too much, but the Uruguayan Tonel X - a solera NV that we brought back; from a fabled foudre, which was about 10k times better and went with the cheese course and in no need to overstate its style. YUM. 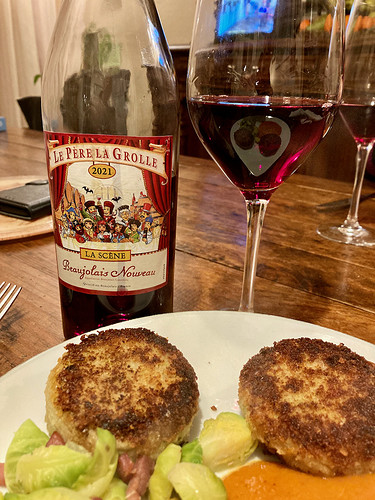 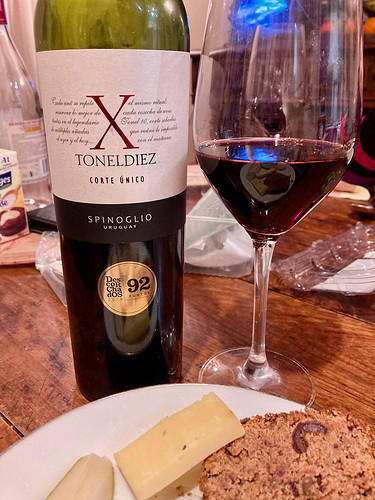 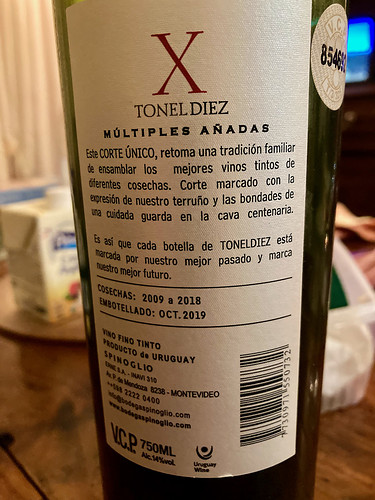 Tonight with some cannelloni; pea/brocolli/ spinach/ ricotta filling in a red pepper - tomato sauce topped with a cheese béchamel gratin (entirely home-made from scratch in case you’re asking) this red from Teneriffe that we bought at the vinotec as it had won that year’s (2016) gran medalla d’oro. 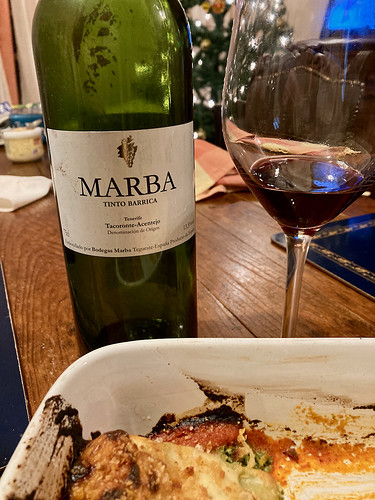 With a - surprisingly - pain free Christmas tree decorating, cheesy Christmas songs on the telly and the other halves lovely Moussaka… 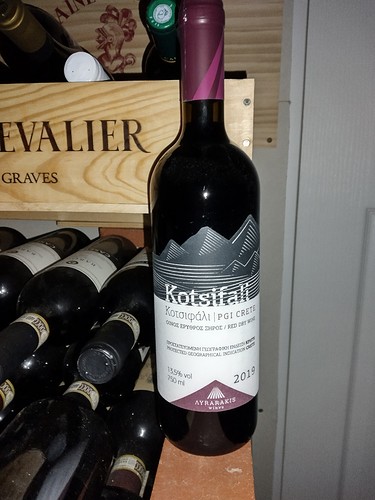 And as if by magic, Slade have just turned up… Just the ticket

I’d love to hear more about that one!

This evening, I’m finishing this off: 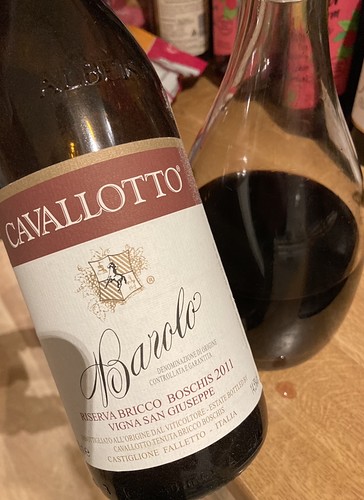 I was in the mood for a proper banker of a Barolo. The discussion about the ‘Sweepings’ Barolo from Vajra that L&W are pushing reminded me that Barolo isn’t really Barolo unless it’s done well, and I was reaching for this bottle before I knew it.

This riserva is a fabulous text book wine, with a generous rose and tar nose, and a sharp, fresh, long experience in the mouth. It is an outstanding wine, whether with food (a bit of ragu yesterday evening) or to contemplate. Expensive but well worth it.

From the sublime to the ridiculous in two posts

Certainly, it isn’t at the end of the spectrum that the Cavallotto is operating in (!) - it’s most definitely a table wine (about €5-6 locally, £10ish internet?), midweek stuff, though it is very drinkable, with sort of slightly underripe cherries but then a core of more concentrated, darker fruits come though. My OH commented that ‘it’s not a fine wine, but it is very nice’, which describes it’s rusticity in a nutshell.

I have my eye on trying to get a bottle (I think a case is out if the question) of the 2013 after KoK gave it 100%. I’m hoping L&W stock it (I hope I haven’t missed the boat) Prices are a little eye-watering though

I’d love some more 2013 Barolo, including a bottle or two of that vintage of this. Keeping fingers crossed that TWS release a New Year 2013 Barolo selection in 2022 or 2023. I’m pretty sure they offered a load of 2010s (should have bought more…) a couple of years ago so it’s not impossible.

Ooh, hadn’t considered that. I still maintain it will be the insiders vintage in a few years time (but then I would, wouldn’t I). Fingers crossed. The only downside for our/TWS perspective is that it would clash with 2019 EP. Having said that, bring it on

Not for the first time, my thinking when offered X or Y is both. 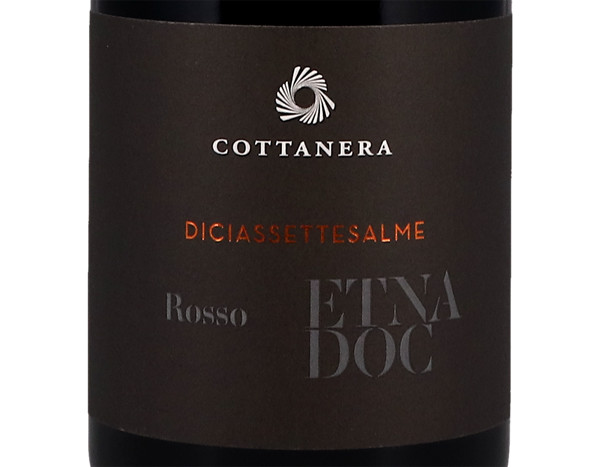 My mum did a bit of cleaning, my sister went through paperwork and I made some roast veg with a spicy tomato sauce.

Quite a bit of maturation since my last bottle. Smooth and classy Etna.

Keeping busy and being supported. Despite my grief I feel cherished and blessed.

From the Times yesterday…

‘One in ten Britons admit that they have poured cheap wine into an expensive bottle to impress guests.A third of millennials are guilty of using this trick, while a quarter of them secretly mix different wines.The research by Aldi, the budget supermarket also found that 10% of hosts have fallen out with guests after arguing about wine.’ 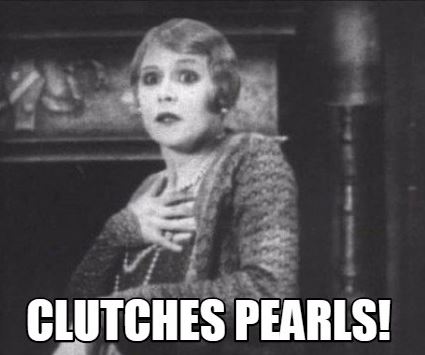 On a similar thread - TOH used to run a guest house doing evening meals in SW France, and the drinks catering involved providing generic rouge, rosé or blanc bought en vrac by the 5-litre from the local cave. Most of it was sourced from the Languedoc.

However she also had a large decanter bought new for about €5 from the local discount store which was stored reverently in a cabinet in the dining room. On “special occasions” - usually to impress gullible guests from across the Pond - it would be reverently retrieved, brandished as an ancient family heirloom and, behind the scenes, some of the bulk plonk poured into it. This commanded a significant premium on the cost of the evening meal but was fully appreciated and admired by the gathered company…and the amount of twaddle commentary peddled by some of the “knowledgeable” guests was most entertaining. 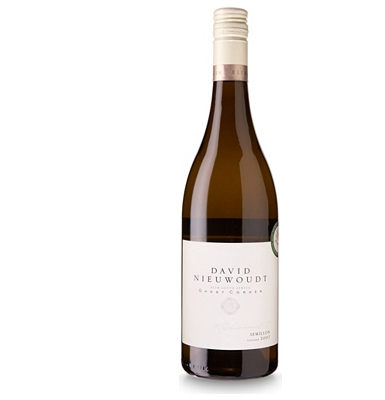 I opened one of these tonight, to tide me through the week - another David Nieuwoudt Ghost Corner Semillon 2015. One of my old favourites.

Of the two of these I’ve had this year, both having been tucked away for a few years, one was indescribably good, and the other indescribably awful. The one had flourished with a bit of loving neglect while the other had suffered with it.

Fortunately, this one is another of the former. Slightly smoky again, but with lovely fleshy acidity & minerality to over-ride that enough, and just a bit of fruit to gently tease. Nice and dry / tanniny at the end, inviting you back for another sip. Disappointingly lovely, as I can only have the sips of the one glass this evening. Ho-hum.

I moved your (lovely!) post to the correct week, @crocos. Hope that’s OK

I’m falling behind in my drinking, this will not do… 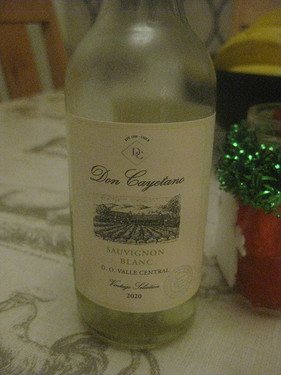 Grassy, but thankfully not like that corner of the garden where the neighbourhood cats go. Less gooseberry, more lemon & lime in this one, but not overwhelmingly so. Fresh and fun.

I’m falling behind in my drinking, this will not do …

The drinking or the reporting…?

Both! I still have a bit of yesterday’s in the fridge…

This perhaps should have gone in the weekend drinking thread, but it didn’t feel appropriate to that occasion, so I hope people will forgive its being posted here.

The South-West Hampshire Wine and Food Appreciation Group met on Saturday 4 December with Philip & Carolyn hosting as well as ever. If only the Bluestar bus route had been as reliable. Whereas sometimes we have had two very similar choices for each course, or some obvious misfires, the main feature of this meal was how often two quite different wines both worked with the same dish.

For our aperitif – when we finally managed to arrive – we had a Crémant de Bourgogne Blanc de Blancs, clean and quite light in flavour.

Our starter was a salt cod paté, with croutes, olives, cucumber and tomatoes. Both wines were from Spain, but very different in style. One was a 2020 Albariño Rias Baixas, aged 6 months on lees, from Viña Lareira, fresh and well-balanced with a hint of lemon. The other was a Viña Gravonia white Rioja, 2012, from the very traditional producer López de Heredia, with a lot more colour and depth and obvious vanilla from the oak ageing. Both worked very well, in different ways, and people’s slight preferences reflected their a priori preferences for one style or the other.

The next course was a braised haunch of venison with Lyonnaise potatoes, red cabbage with cranberries, and braised celeriac. The wines were a young and fruity 2019 Lirac from Domaine Maby, a Grenache-Syrah-Mourvèdre blend, and a 2005 Cahors Malbec from Chateau de Haute Serre, deeper and rather more tannic. The depth of the Cahors suited the venison better, but the fruit and freshness of the Lirac were a better match with the vegetables, especially the sweetness of the red cabbage. Again overall preferences generally reflected a priori preferences for one style or the other.

The cheese was a Mimolette, a hard cheese from Northern France, broadly in the style of Edam. The offerings here were a very dry sherry, Manzanilla Pasada Pastrana, and a Lebanese red wine, Ksara Carignan 2018. Although the sherry was very dry, the cheese brought out its brightness and nutty flavour. The Ksara was quite light, with darkish fruit flavours again brought out by the cheese. Although both wines worked, we reckoned the sherry edged this one (and surprised some of the group).

The dessert was a warm carrot cake with hazelnut marmalade syrup and nutmeg mascarpone cream, the nutmeg quite prominent. Again we had two excellent but very different wines, a 2018 Monbazillac, Domaine de Grange Neuve, very like a Sauternes in style, and Warre’s Colheita 2009 tawny port, quite delicate and honeyed. The port perhaps matched the spices a little better and on that basis was the marginal victor.

A fascinating evening, with a really good collection of matches.

Door Six brought forth the white version of Door One… 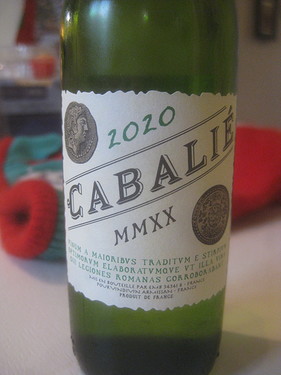 …and a marked drop in acidity compared to the sauvignon blanc. Viognier-dominant blend, and boy did the viognier dominate. Peachy peachness.

This drank very well with a beef cheek casserole. Because it was BYO at a dinner, decanting was impracticable. I will decant the next bottle. 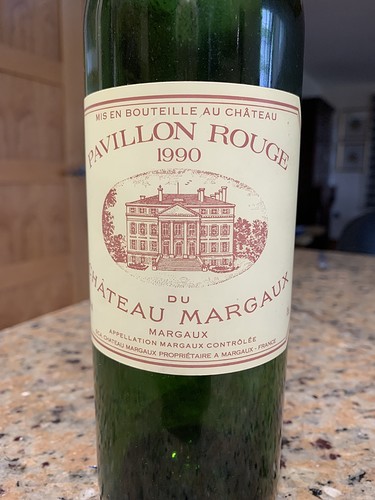 Mmmm… this is lovely…. 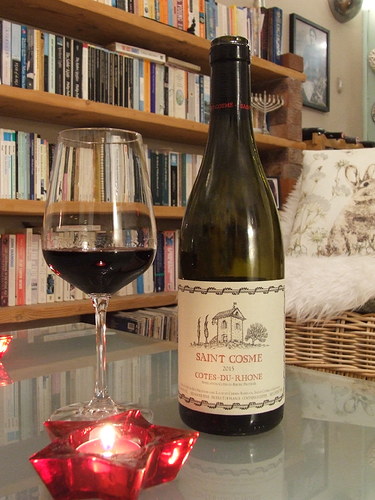 I can see why it got quite a few members excited. It’s fantastic - especially considering its (ridiculous?) price. We drank the 2018 vintage nearly a year ago, and I loved it, but missed a bit of a savoury dimension. Well, this one delivers the wonderful combo of the fruity and the savoury which I love so much, and much more besides.

Deep purple colour still (and there was quite a bit of sediment), it opened slowly on the nose to reveal notes of incense, bramble and prunes, as well as baking spices and pepper spiciness. On the palate it is more than the sum of its parts - there’s smokiness, and dried berries and prunes, there’s savoury notes of dried herbs and spice aplenty. There’s even a medicinal flourish on the finish - all elements are perfectly integrated and smooth, but with a wonderful freshness - perhaps from the Vinsobres altitude.

It goes to show that sometimes Syrah doesn’t need any supporting acts, even in the Southern Rhône…